SOLU KHUMBU, situated in north-east Nepal, is the homeland of Sherpas. Most of the famous climbing Sherpas hail from the upper district Khumbu, while the Sherpas of lower Solu district are traders. These Sherpas had close relations with. Tibet in the north and were engaged in regular trade with them, while not much contact was established with people in the plains. Earlier in this century, Sherpas at first migrated to Darjeeling which was developing as a major climbing centre due to opening of Tibet. Many Sherpa families settled down there for better employment and trading and Darjeeling became another homeland for them. As a consequence, regular contact developed between these two hilly regions. They used to follow three major high-level routes to and from Darjeeling (see Map). The northernmost was to cross the difficult Amphu Lapcha Pass to Barun Valley, Lumba- samba Himal and to Walungchung Gola. Then on to Ghunsa, Tseram to Sikkim via Kang La and on to Darjeeling. The second route went a little south from Luckla over Pagong Dara, Salpa Dara to Arun Valley. Then passing through the prosperous towns of Chainpur and Taplejung it crossed over to Sikkim via Chhiya Bhanjang or Phalut. The lower route followed from Solu region via Okhaldhunga, Terrathum to Iilam and Darjeeling. All the routes were 14-18 days in duration and passed over rugged terrain in most remote areas.

Solu Khumbu Sherpas had regular contact with Kathmandu also in the west. Here two major routes were popular. The higher going over Tashi Lapcha Pass (19,100 ft) to Rolwaling Valley and to Kathmandu via Dolkha in 10 days. The lower route, which is now the famous Everest Trail, followed from Luglha to Jumbesi, Lamosangu to Kathmandu. Now with an airport at Lughla, many Sherpas fly to Kathmandu and proceed by bus to Darjeeling and the above routes are not used by them for long journeys.

We followed the old 'Sherpa Trail' from Kathmandu over Tashi Lapcha Pass to Solu Khumbu and then to Darjeeling via Salpa Dara, Taplejung, Chhiya Bhanjang, covering 375 km in 40 days of trekking. We crossed 7 passes ranging from 7500 ft to 19,100ft crossing watersheds of major river valleys including Bhote Kosi, Dudh Kosi, Arun, Tamur and Kabeli. On an average these river beds were at an elevation of 2000 ft with their watersheds at 10,000 ft, thus making us climb and descend about 16,000 ft to cross one river valley. As one journalist put it, this whole area has missed the great invention of mankind, in the last century, the wheel. There are prayer-wheels, but no hand carts, bullock carts and no mechanized transport except two small airports Everything is carried on human shoulders as even animal transport is limited to yaks. £3ut the region is very rich in beauty with very friendly people and very inviting for mountaineers.

We were five members Zafar vasi, Rajendra and Rupal Desai, Geeta and Harish Kapadia, sponsored by The Mountaineers', Bombay. From Katmandu we reached Barahbhise on the Kodari highway on 26 April 1978, with Sherpa sardar Jangbu and about 9 porters. The track climbed up to Rolla Bhanjang, 7500 ft in two clays and we descended to Charikot-Dolkha, the district headquarters, on the banks of Bhote Kosi also known as Tambe Kosi. Proceeding along the river bank we camped at Pikoti and Ghungar to turn east, entering the Rolwaling valley. The climb to Simi, 8000 ft and Beding. 10,500 ft, was through very rich forest to begin with but the last portions were totally eroded Bedmg is an enchanting olace with waterfalls, open valleys and a close 4wof the east face of Gaurishankar, 23,560 ft. Nagaon, 13,300 ft, was the last village in the valley. Rolwaling has the largest Sherpa settlement outside Solu Khumbu and has close contact with the neighbouring district 4 May was spent leisurely at Nagaon repacking and acclimatizing. The route ahead climbed gradually to Chobuk Lake, 15,000 ft, over boulder-filled moraine. We had to rest here an extra day Zafar was not acclimatizing well He had to be sent down in the evening with a Sherpa and after receiving an 'all well' note from him we proceeded ahead. As we learned later, His condition surprisingly deteriorated even after a further descent and he had to summon a helicopter to be rescued in a hurry. A costly affair.

For the next two days, we proceeded gradually along the lateral moraines to camp at the base of the icefall Jangbu missed the traditional route and was caught in two bad avalanches along with Geeta and a porter. Luckily they escaped by inches but we lost all our ropes and were left to cross the 19,000 ft pass without any ropes. The route through the icefall was steep and rather dangerous, passing underneath many a hanging ice tower. We camped on the upper snowfield at Tolbeding, 18,600 ft. Starting early on 10 May, and going over a few crevasses and a huge bergsehrund, we reached the pass by 9 a m. Sir Edmund Hillary, who pioneered the crossing of this pass for mountaineers in 1951, has described it as the most difficult and spectacular. We missed all the views due to fad weather in the east. Our descent was quick on the other side and, covering 28 km in a day, we rushed down to Thami by evening. Next day we reached Khumjung and Namche Bazar in the Heart of Solu Khumbu. Fresh purchases in the traditional and colourful bazar at Namche on a Saturday was a very costly job. The rates were exorbitant, quality poor and quantity difficult to procure. It would have been cheaper to fly all our provisions here from Kathmandu. After rest and enjoying excellent scenery of Sagarmatha Himal (Everest) we walked down to Luglha. We spent a lot of time talking to trekkers and mountaineers from various parts of the world and heard the original recordings of the climb of Everest without oxygen by Messner and Habeler from a journalist friend. Along with steep prices and commercialism there are few advantages of the great trekkers' influx into Sherpaland. However the area looked clean and with many facilities. Geeta flew home from Luglha, as scheduled, while we proceeded on the second half of our trek on 16 May.

The route now was at altitude ranging from 2000 ft to 11,000 ft with luxuriant forests in remotely situated valleys. We crossed Pagong Dara, 8500 ft, and Surke Dara, 7500 ft, crossing Inkhu Khola and Hongu Khola respectively. Sherpa villages were now far and few and only on the higher ridges, with hot valleys being occupied by Tamangs. We were caught off guard in a flash flood and lost some of our kitchen items as we passed through, observing the changing customs and way of life. On 21 May, we climbed to Sanam, the last Sherpa village on our way, to be welcomed by an old lady literally studded with gold ornaments. At Salpa Dara, 9500 ft, we crossed out of Sherpaland to Arun Valley in Khandbari district and Kumbhakarna Himal. It was a land of Kshetri villages and our Sherpa porters were clearly feeling out of place. We had to cross small rivers umpteen times over varieties of bamboo bridges, and the whole region was rather tropical. After two days, we reached the gorge of the river Arun, the largest river in East Nepal. It was hot and windless as we crossed Arun dangerously in a small and leaking canoe carved out of a tree-trunk. Walking along the river to Tumlingtar was a torrid experience. On 24 May we climbed to Chainpur. This was by far the most beautiful and rich town in the valley with an excellent view of Makalu. We admired those large houses with the nearest road-heads at least 12 days away. Chainpur to Nundhaki and Milke Danda, 10,100 ft, was again the same story of ups and downs. At Milke Danda in the evening, we were treated to some fantastic scenery of Makalu, Jannu, Kangchenjunga and all the surrounding ranges. It was a magnificent display of beauty in changing colours of sunset and it made our whole trip to East Nepal worthwhile. The forest north of Milke Danda was like a walk in paradise. It had varieties of orchids, rhododendrons, lilies, colourful birds and butterflies, all in the backdrop of the above mountainscape.

Again we descended to 2000 ft level to Dobhan at the confluence of Mewa khola with Tamur. We were in the soldiers' land as all the villages are famous for their fighting qualities in the Gurkha regiments of the Indian and British armies. We met many retired soldiers and heard many battle stories. Taplejung, the district headquarters, situated in Lumbasamba Himal, is an administrative town of historic importance. Following the same routine, we descended to cross the hot banks of Kabeli, the last river gorge of our trek, to enter Kangchenjunga Himal and Panchthar district. All the villages were poor and the area far from inviting. Chyangthapu was the last village on Nepal side with a border check-post. Customs 'officials' went through all our items thoroughly, mainly out of curiosity as no other party had passed for a long time. The climb to Chhiya Bhanjang, 12,808 ft, was gradual and at last we were on the Singalila ridge and entered Sikkim, India. We climbed down to Uttare and Dentam for a taxi to Darjeeling, thus completing our Sherpa Trail. 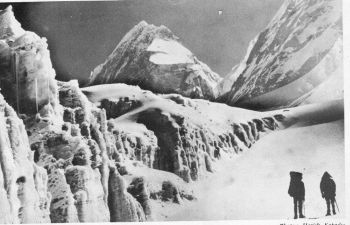 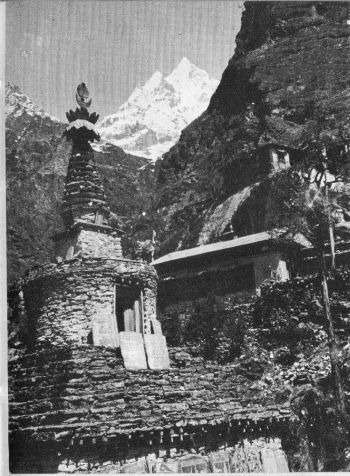 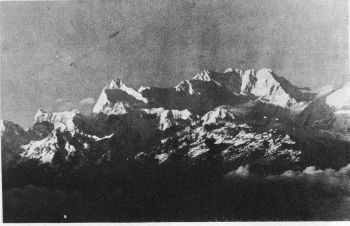 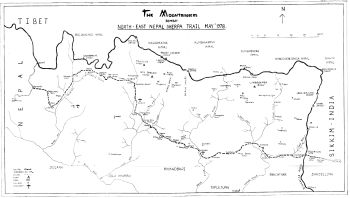