The members were as follows :

We arrived in Lata on 10 September. On the next day, we started for the Base Camp with 42 porters and 50 sheep, and arrived after four days. The caravan route was through the Dharansi Pass and along the Rishi Ganga and in to the Trisul Valley.

The Base Camp was established at Tridang on the left side of Trisul glacier. The altitude was 4750 m according to our altimeter. Former Trisul parties had set up Base Camp at the same place.

On 19 September, we began climbing activities. Twelve members and two porters set up the temporary Camp 1 at a height of 5050 m on the left side of Trisul glacier. Next day the same members went up to the temporary camp and moved it 100 m higher and most members stayed at Camp 1 (5150m). The route from Base Camp to Camp 1 was first through the side moraine then down on the glacier. The route was not difficult but it was long, about 6| km. Camp 1 was at the base of the east ridge from Trisul Main peak. On 21 September, Tsunoda and Yashima started from Camp 1 early in the morning for reconnaissance of the branch glacier flowing out from between Trisul Main Peak and II peak. They reached point 5850m on that glacier and found a good place for Camp 2 at point 5850 m on a snow plateau. Eleven other members took loads up to that point and returned to Camp 1. On the same day Nonaka and Nojima went up to Camp 1.

Next day all the members who had stayed in Camp 1 carried loads up to Camp 2 and stayed there. The route was along the east ridge with no technical difficulty. At that time. Kuwabara became seriously ill in Base Camp. I called by walkie-talkie to Dr Nojima at Camp 1. He rushed to the Base Camp and arrived there at 11 a.m. Kuwabara's illness was diagnosed as bronchitis. I decided to ask the army base in Joshimath to send a helicopter for his aid, so I sent Narain Singh to Joshimath army base, with the liaison officer's approval. But no helicopter arrived the next day.

The members who had stayed in Camp 2 went up to a point about 6000 m high and then went down to Base Camp where they rested for two days. This was the first step in acclimatization.

Hatakeyama and Suzuki started from Base Camp and climbed to 5496 m on the north ridge from Trisul Main Peak, established an Attack Camp and returned to Base Camp.

On 27 September, all the members at Camp 2 started at 4.30 a.m. Two parties were organized as follows :

The Trisul II Peak party were hoping to set up Camp 3 and to climb Trisul II, but could not reach to summit because of the distance and a lot of luggage. They stopped at about 6400m and established Camp 3. The route from Camp 2 to Camp 3 was very long, the snow was soft and had some crevasses, but there was no technical difficulty.

Of the Trisul Main Peak party, Tsunoda and Yashima reached the col between Trisul main and II Peak at about 6600 m for reconnaissance of the route to the Main Peak. Other members carried up luggage to Camp 3. Inada, Nojima, Wada and Capt, Chopra went up to Camp 2,

On 28 September, an attempt was made on the summit. The weather was as bad as it had been since arrival in Base Camp. It had been snowing since the previous night and it was blowing hard. The route was covered 30 cm deep in fresh snow. All members from Camp 3 started at 2.30 a.m. The outside was very cold and in utter darkness. The Trisul II Peak party met many crevasses below the col. The party passed over crevassed area and then reached the col. The distance from this point to the summit of Trisul II was estimated to be about a kilometre, but this route was in deep snow and they were compelled to take turns in breaking a trail. At 6 a.m. they reached the summit of

Trisul II.[1] The summit was a wide dome of about 600 sq. metres. They stayed 30 minutes on the summit, then all but a few members returned direct to the Base Camp.

The Trisul Main Peak party also started from their Camp 3 at 2.30 a.m. They were afraid of losing their way on account of deep snow and darkness, but reached about 6700 m at 7.30 a.m. They were hesitant to go ahead on to the summit in such bad weather, and consulted me by walkie-talkies. I advised them to continue the attack because I thought the weather would soon clear. The snow was hard and the south ridge was virgin route. The slope of the ridge was about 30 to 45 degrees and ropes were not fixed all the way. But we were lucky, the weather cleared and they could see the upper part. They went ahead, surmounting a few false summits. The attack party reached 7000 m at 9 a.m. and began to climb the steep slope of the summit pyramid. The slope of the ridge was about 50° to 60°. They climbed up carefully.

At 10 a.m. they succeeded in making a new ascent of Trisul Main Peak from the South ridge. The summit was a small snow triangle. They had a wonderful view of 360°, to Kamet, Nanda Devi, Nanda Kot, the peaks of West Nepal and many more. They stayed 30 minutes on the summit.

On the way back there was no difficulty though one member slipped while traversing but was saved by the following member's belay. Also, Takahara had eye trouble above Camp 3, but came down with the help of; other members. At 9 p.m. they all arrived at Camp 2 and were given treatment, hot drinks, and soup by Inada, Wada and Capt. Chopra.

Next day, all the members descended to Base Camp, and celebrated our successes with a big fire. The party was made splendidly international by the presence of the Polish and Italian expeditions.

At the end of September, we left the Base Camp with 39 porters. We reached Lata in three days, as the weather was clear and we had fine views of Nanda Devi, Bethartoli Himal and other famous mountains. 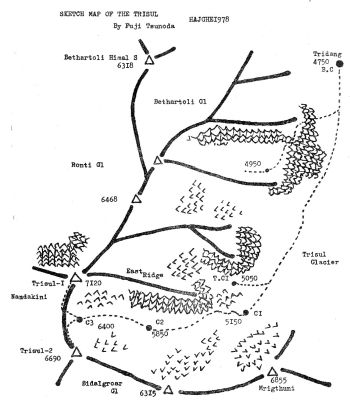 SKETCH MAP OF THE TRISUL