BUILDING on the strength of our South American Expedition the previous year, A1 Rouse, Brian Hall, myself and newcomer Roger Baxter-Jones decided to organize an expedition to climb in the Himalaya. From the very outset we decided on a lightweight expedition and this for various reasons. Firstly we were limited to nine months in which to organize the expedition, secondly we were not ii\ a position to raise the large sum of money necessary for a big expedition, and lastly, and this being the main reason, we preferred to climb as a close group of friends with neither bureaucracy nor hierarchy.

The next decision we had to make was what to climb. The Karakoram we immediately ruled out as being too expensive in spite of its beautiful and appealing unclimbed peaks. Nepal, however, seemed to offer us the best possibilities for choice of mountain. Eventually we succeeded in gaining permission to climb Jannu (25,294 ft - 7710 m). To our minds this was an ideal peak : it was low enough not to require oxygen, it was a spectacular mountain and what was more important its East Face was still unclimbed and appeared to present a difficult and worthwhile objective.

Our expedition planning was haphazard to say the least, lack of knowledge of the Himalaya in general and Nepal in particular meant we had to send off sackfuls of letters to get hold of information which now, with only one expedition to our credit, appears to be the most commonplace and straightforward. However from all these snippets of information we were able to piece together a budget sheet which when everything was totalled came to the princely sum of £5200. Digging deeply in our pockets and helped by the Mount Everest Foundation and British Mountaineering Council we scraped together the required cash and equipment and flew to Kathmandu with all our gear parcelled up in a dozen or so rucksacks. That was 16 August; a week later we were in Dharan Bazar hiring porters to carry our thirty loads into Base Camp.

How naive we were in those early days ! How we worried and fretted over the loads. Would we lose anything, were the porters taking too long, were we being cheated at every step ? We soon realized that worrying was not going to help us at all and we might as well relax and let the expedition take its general course. So for several days we wandered through the beauteous Nepali countryside, looking on amazed as the farmers and tradesmen carried on their normal work. Soon the walking began to pall, the never-ending never-stopping journey north and east went on and on till it became just like a job of work. Stumbling off in the gloorri of the morn, trudging throughout the day and breathing a sigh of relief when it all stopped for the night. The mist and low cloud concealed all aspects of mountains and during the walk-in it was hard to believe that we were there to climb a mountain.

At Yamphodin we left behind the last vestiges of civilization and six days later we were carrying the last of the loads through the snow and scree of the Yalung Glacier to set up Base Camp. The! date was 13 September and still we had caught only a fleeting glance of Jannu through the monsoon clouds.

For three weeks we were virtually confined to Base Camp as the monsoon sent its daily snowstorm. Still, it gave us a chance to acclimatize as we went off for short walks and climbed on the excellent granite boulders surrounding Base Camp. Through gaps in the cloud we picked out a route which we thought might Lead us. up the East Face of Jannu. It wasn't as direct as we had hoped, the main bastion of Jannu is well guarded by dangerous seracs and ice-cliffs. The route was a straggling affair which gained the northern end of the summital ridge of Jannu.

On 6 October the weather improved and we leapt into action. Rucksacks were packed with 10 days' food, ropes, climbing equipment, clothing etc., and we set off to climb the route. The rucksacks were heavy, too heavy for this type of climbing, but everything was indispensable. We continued climbing up the lower rocky buttress and on to the snow. That was worse, completely unconsolidated snow, and progress was slow. We gained about 800 ft the first day. The next day the climbing was better, the snow was firmer and the warm sun made the rock-climbing a pleasure, but still we were moving too slowly. Then we were on to the snow ramp which would lead up to the col which lay just to the north of Jannu. The morning sun soon turned the snow into a heavy wet mass. Progress was diabolically slow, we could hardly move in the stuff and it took us until the fourth day before we reached the col. Here we had a conference-of-war. Ahead the way looked desperately difficult, we were running out of food, gas was low. What were we to do ? Finally the decision was taken to descend.

Two days later we were back in Base Camp wondering what our next step was to be. The consensus was that the East Face was impossible for an expedition like ours; without fixed ropes or camps on the route we had to rely on a fast ascent of the mountain or nothing and the East Face was not that sort of route. A prolonged discussion brought us to the conclusion that the only chance we had was to switch our attention to the South Face (i.e. the original French route up the mountain). This route had been ascended previously by two parties (the French, H.J. Vol. XXIV, p. 3, and the Japanese), each taking about six weeks to climb it and in doing so setting up 6 fixed camps and having fixed ropes strung all the way up the mountain. We decided probably in our ignorance - that we could complete the whole climb in a week, that if we cut our weight right down, carrying the minimum of food, virtually no climbing equipment at all and not even bothering to take a tent, then we could climb the mountain in five days and make the descent in a further two. Once decided, we set about the arrangements. The schedule was as follows : 3 days' walk to the foot of the South Face, 4 days up, 2 days down, 3 days' walk back to Base Camp. Accordingly we instructed our Sardar to rendezvous with us in 13 days and with 8 porters start the walk-out. This would give us one day's grace should anything go wrong. The day after we had returned from the East Face we were off again, back down the Yalung glacier to the yak pastures of Ramsher. Here we hired a couple of yak herders who would help us carry over the 17,500 ft (5000 m) Lapsong La and drop down into the Yamatari glacier. The third day we walked up the Yamatari burdened under the full weight of all our gear.

The first day on the mountain was straightforward as we worked our way up through the first icefall, reaching its upper slopes in the late afternoon. A few rocky pitches later saw us on some rock ledges and sorting out a bivouac site. By now the weather was settled with clear blue skies suspended over a dense bank of valley mist. The next day brought us to what was probably the hardest part of the climb; the ridge which leads up over the Tete du Butoir and on to the Throne. For the best part of a day we struggled up the powder-snow ridge, being forced off on to the south flank whenever a snow mushroom barred the way. Six pitches of this climbing took up the best part of the day and we were all pleased to reach a bivouac site and relax the nervous tension of such climbing and envelope ourselves in our down sleeping-bags.

The final two pitches of the ridge were hard-won the next morning and then we tramped our way through rotten snow to the foot of the Tetes des Butoir and Dentelle. The snow was of such a consistency that nobody in their right mind would consider climbing it in the Alps or in Scotland, but seeing it was the Himalaya a path was ploughed through it. At the top of the Dentelle we stopped to weigh up our situation. Not so much a question of going on but more a question of how to get down. We visualized every pitch of the climb and estimated what piece of equipment was to be sacrificed for the descent. Once this equipment audit had been carried out we realized that we still had a few pegs and slings to our credit and so we could continue. We crossed the Tete du Boutoir and that night we laid out Our bivouac at the start of the Throne. On the fourth day we crossed the Throne and spent the night in a bergsehrund at the foot of the summital block at an altitude of about 23,000 ft. By now we had fallen slightly behind our schedule and lack of food meant we couldn't extend it, so boldly, we decided that our only chance was to make a single push up the final 2000 ft leaving behind in the bergsehrund all our food, stoves and sleeping-bags and relying on speed and lightness to take us to the summit and back in one day.

We left the bergsehrund at three in the morning with the pockets of our down suits stuffed with bars of fudge, spare gloves and cameras. It was extremely cold so we moved rapidly up the ice slope in order to keep warm. As the sun came up we were just entering the couloir which led through the summit rocks. The morning sun did little to raise our bodily temperature. The high winds and freezing conditions made us fear for our fingers and toes. Stopping for food or photos was virtually out of the question as the wind lashed ice and snow into our faces. As we exited on to the final ridge leading to the summit we were fully exposed to the elements and progress was slow and painful. Thankfully we were fully acclimatized and the lack of oxygen wasn't too great a problem. Nevertheless the last few yards were hard-won but eventually at 11.30 we were on the summit. Quickly photos were taken and we retreated to the relative safety of our bivouac.

The ensuing days were a nightmare of downclimbing the route, occasional abseils off snow bollards. Tiredness and lack of food made all movement an effort. In two days we were back down the Yamatari Glacier. A gruelling day in a snowstorm took us back over the Lapsong La then, leaving our rucksacks at Ramsher, we headed up the Yalung Glacier to Base Camp. 24 hours later the porters arrived and shouldering our loads we headed off back to civilization. 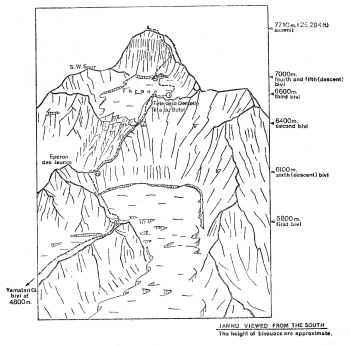 JANNU VIEWED FROM THE SOUTH 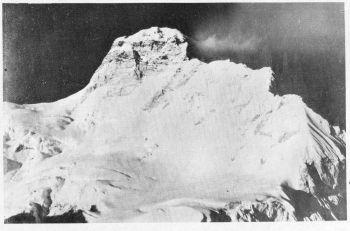 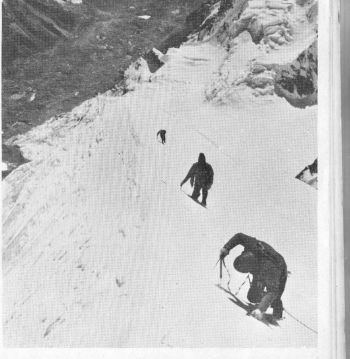