KANGCHENJUNGA lies 75 miles ESE. of Everest on the borders of Nepal and Sikkim The name means 'the five treasure houses of the great snows'. It is at 28,208 ft the world's third highest mountain — being approximately 800 ft lower than Everest and 40 ft lower than K2. For most of the year Kangchenjunga is hammered by the fierce, westerly moving air currents which make climbing on the upper reaches of the mountain such a difficult proposition. There is reported to be, towards the end of May, a period of relative calm preceding the onset of the monsoon. It was at this time that the mountain was first climbed by the British in 1955, when Charles Evans' party put two teams on the summit via the Southwest Face. In 1977 an Indian expedition was the second successful expedition on the mountain, reaching the summit just prior to the monsoon by a line up the Northeast Ridge.

The object of the 1979 British Expedition was to make the first ascent from the northwest, from the Kangchenjunga glacier. They decided not to use oxygen equipment, but took one bottle of oxygen and mask and regulator for use in a medical emergency — happily, this was not used. They also decided not to use radios, winches and other encumbrances and to limit Sherpa support to two Sherpas as far as the North Col only. From the start it was decided to limit the team to four members and to finance the project from their own resources as far as possible. It was decided not to seek the support of a single main sponsor and to avoid commitments to the media and film-making. Their only commitment, therefore, was to themselves and the mountain. The original team had to be changed when Paul Braithwaite withdrew because of illness and his place was filled a few weeks before departure by Georges Bettembourg from Chamonix. Georges had made an impressive 'two-man' ascent, with Yannick Seigneur, of the 26,400 ft Broad Peak in 1978. Peter and Doug had both climbed Everest in 1975, and Joe had been to 23,200 ft when he climbed Dunagiri. Between them the four members had been on over twenty Himalayan expeditions.

The 18-day walk in to Base Camp began on 18 March from the British Gurkha Camp at Dharan Bazar. They reached the last permanent village, Ghunsa, on 30 March. After a two-day rest, during which they bought provisions and hired new porters, the team continued up to Base Camp at Pang Pema (16,500 ft), reaching there on 4 April. The approach march was the most magnificent that any of them had experienced in the Himalaya. Unfortunately, their appreciation of the superb mountain scenery was tempered by the fact that Peter, whilst bouldering, damaged a ligament in his ankle and had to be carried for four days, from the village of Chirowa to Ghunsa, in a wicker basket by a three- man team of strong porters. Although he began to recover after reaching Base Camp, it was not until a month later that his foot was strong enough to allow him to lead any hard climbing.

The West Face of the North Col

During the next two weeks, after many setbacks with the weather and stone-fall, which damaged a tendon in Peter's wrist, they climbed and fixed rope up the 3000 ft mixed ice and rock West Face of; the North Col to establish Camp 3 at 22,600 ft. This face was reminiscent of the difficult Northeast Spur of the Droites in the Mont Blanc range. In teams of two they had now systematically climbed the major technical difficulty of the mountain.

On 1 May Joe descended with severe headaches to Camp 2. The rest of the team reached a suitable site for Camp 4 after climbing 1800 ft up the North Ridge to 24,400 ft. With no sign of Joe at Camp 2, and assuming that he had retired to Base Camp, the other three members moved up the ridge on 2 May to dig a snow cave for Camp 4. After digging for five hours they had a magnificent grotto and a firm bas$ from which to tackle the remaining difficulties of the mountain. The next day they climbed the steep, avalanche-prone snow slope above to a rock step up which they forced a way and fixed 300 ft of rope — all that they had left.

Peter, Georges and Doug left for the summit on 4 May. They re-climbed the Rock Step and exited on to the Great Scree Terrace and snow slope on the west of the North Ridge. They were now at the mercy of the westerly winds, blowing in gusts of 60-70 m.p.h., which just allowed them to proceed intermittently alongside the North Ridge until, at 26,000 ft they decided to find shelter on the other, Sikkimese, side of the ridge. They crossed over with great difficulty as the winds were now blowing continuously at 80-90 m.p.h. The winds blew from the Everest- Makalu group without interruption until they reached the Kangchenjunga massif and they were now catching the full force of them. Crossing over a little snow col, they experienced violent static electricity that felt as if their backs and buttocks were disintegrating. Immediately they crossed over the ridge the wind dropped and the team were laboriously able to collect their thoughts and dig out a ledge about 50 ft below the ridge on the ice slope, for the bivouac tent. After digging for three hours, they had the tent pitched and settled down for the night in anticipation of the first summit bid. At 1.30 a.m. on 5 May the wind changed direction and rapidly increased in violence which snapped the centre hoop of the double-skin tunnel tent. The team soon had their boots and gaiters on but at 2.30 a.m. the tent was blown two feet along the ledge. They had to hold on to the tent from the outside whilst the gear was packed and the tent evacuated. The wind was at hurricane force and strips of fabric started to blow from the tent. It was necessary to collapse the tent forcibly to lower its resistance to the wind but by then the outer skin had gone. The inner tent in its turn was torn to shreds and was released and snatched away by the wind. The team were now left sitting on that steep slope at 26,000 ft at the mercy of the cold and the tempest. The wind was so strong it blew Georges' sack down the mountain and required three attempts before they could cross the col back into Nepal and beat a retreat to safety. They descended 10,000 ft and covered five miles of mountain and glacier that same day, down to Base Camp. Doug sustained frostbite on the upper joints of four fingers and Peter had frostnip on his big toe.

On 11 May they returned to the Camp 4 snow-cave. This time the team was complete, with Joe having made a fine recovery from his headache. Ang Phurba had reached the North Col twice carrying 30 lb of food and the emergency oxygen bottle in support. 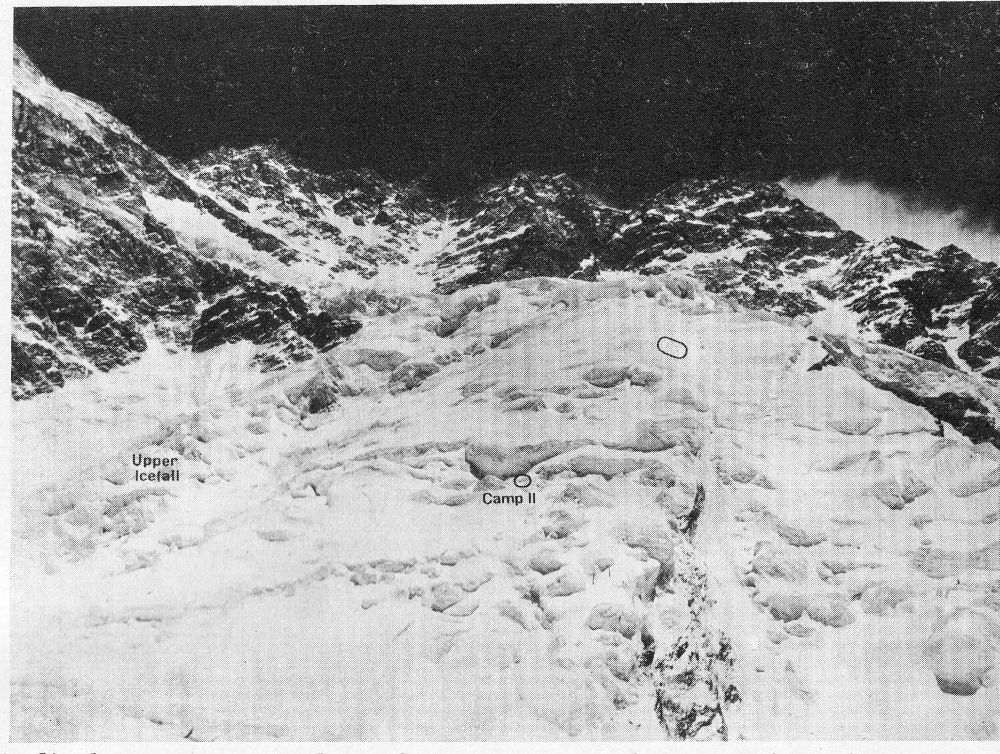 Climbers on route to Camp 3 on upper part of Great Ice Fall. 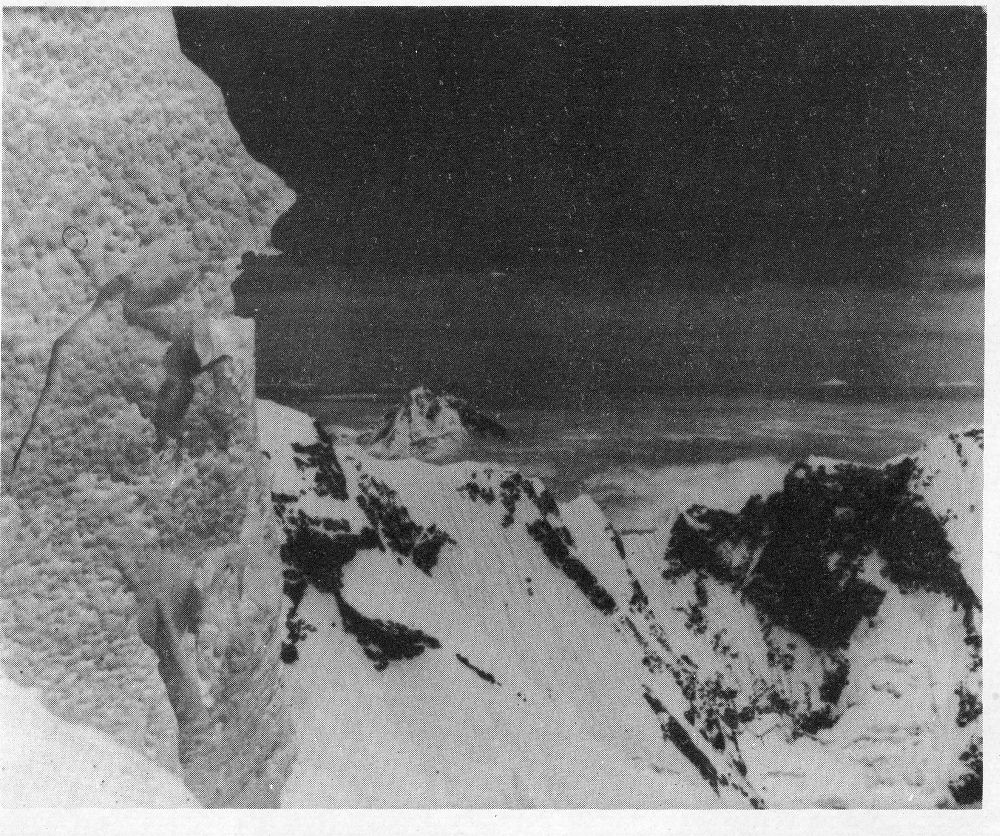 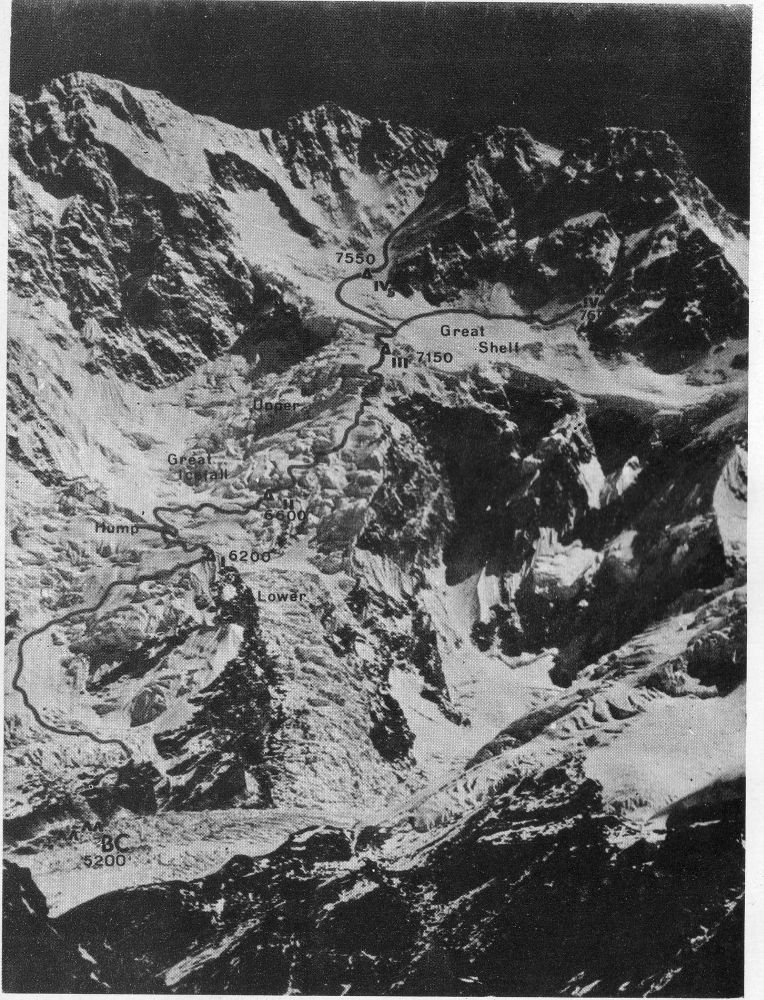 Route of ascent on Kangchenjunga Central and South summits.

On 12 May they waited out a rare fine day to rest and on 13 May decided to go for the summit for the second time. This time they intended to go direct from Camp 4 without tents or sleeping-bags. However, as the weather now looked threatening, they took along a shovel to dig, if necessary, an emergency shelter. Setting off that evening, hoping to use the light of the full moon, they soon reached the Great Terrace. The wind became stronger and snow flurries blew up. They looked for a place to dig a snow-cave at midnight. Joe and Doug started digging under the rock mass they had called the Croissant; Peter and Georges looked for a place further up the slope. Doug and Joe sat in the cave they had made until 3.30 a.m. and then left to look for and join Peter and Georges. They found them sheltering in a natural cave formed by a bergschrund, having returned there to rest after climbing 450 ft higher to a rock step where they had waited for the weather and visibility to improve. However, the weather deteriorated and they descended. The whole team retreated back to Camp 4 on 14 May.

On 15 May Peter, Joe and Doug set off for a third go. Georges, mistrusting the weather and fearing another storm, decided against another attempt and descended to Base Camp. At last the weather was kind and soon a reasonable bivouac was made out of the small, bergschrund cave and a good night was spent there on the 15 May. Good weather prevailed on 16 May and the three set off optimistically at 8.00 a.m. They made good progress up the band of snow that is a main feature of the upper summit triangle. After 2000 ft of climbing, the pinnacles on the 1955 route were reached at 4.00 p.m. At 5.00 p.m. they had climbed the last 500 ft and reached the summit for a magnificent sunset and a fantastic view of all the surrounding mountains. It was, surprisingly, a very enjoyable day, despite the lack Of oyygen, although the descent to the bergschrund cave was something of a trial which did not end until their arrival at 9.00 p.m. Two days later the mountain had been evacuated of most of the equipment and remaining food and the team left Base Camp for Kathmandu on 20 May. They arrived there on 29 May, tired but happy that the four of them had been able to sustain this team effort through so many trials and over the ten weeks of the expedition.