NANDA DEVI -VIA THE SOUTH RIDGE

AFTER our success on Trisul in 1975, we wanted to try a higher and more difficult task. Our first choice was Kamet, as it is in a different area from Trisul. Unfortunately, however, the Kamet area is still closed to foreigners, so the Indian Mountaineering Foundation offered us Nanda Devi instead.

This year we were advised to avoid the Dharansi Pass (on which we had to bivouac in a storm in 1975) because of heavy snow and go via the lower gorge. It proved to be a very interesting and practical approach for the march-in since it avoids the winter snow on the pass, and since the route was only opened in 1976, the camp sites were still quite clean.[1]
We left the bridge at Reni on 13 May with 48 porters and over 100 goats and started up the lower gorge.

The lower gorge is most impressive and parts of the route were quite hard to negotiate with a heavy pack. Luckily the Japanese East Nanda Devi expedition were ahead of us and some fixed rope was in place. At one river crossing we spent 7 hours completely rebuilding a bridge that had been washed away by the turbulent Rishi Ganga.

We arrived at Base Camp after trekking some 10 days in perfect weather. However, our experience with our porters was not so perfect and in spite of the great efforts of our liaison officer, Captain S. S. Dhillon, about one-half of them had quit by the time we had reached camp.

On 27 May there was a tremendous storm and from the summit of Nanda Devi came a long snow plume, while wreathes of snow blew off the lower ridges.

Our remaining porters had by now been dismissed and we did all the subsequent load-carrying ourselves.

We first tried to put Camp 1 at the British site on top of the ridge (5791 m- 19,000 ft), but found it very tedious making tent platforms in the shale and ice slope so we decided to camp at the more capacious site, about 70 m lower down, which was apparently used by the 1975 Indo-French team. Falling rocks and ice from the cliffs above put several holes into the tent flies and so we were forced to move back to the higher site. It took several days to dig out platforms large enough for a two-man tent and a four-man tent.

In the meantime, the way to Camp 2 (6157 m - 20,200 ft) was opened and we now realized that the mountain was already well fixed with rope by previous expeditions. This was just as well since we had brought only 1200 ft and had already used quite a lot of that on the approach. In many places the fixed ropes had to be replaced or refixed and we were lucky to find a lot of Japanese rope stashed at Camp 2.

At this point in the climb-6 June-a tragedy occurred when Captain Dhillon fell to his death while descending from Camp 2 after carrying a load.

We watched horrified as his body appeared out of the clouds to fall some 190 m to the glacier, just across from Camp 1. He had obviously been killed instantly but, because of rock-fall, the body was not evacuated until the next day. With the help of Lt Tankha, the Japanese expedition's liaison officer, a message was sent to the authorities in Joshimath.

Several days later we had our only bad weather on the mountain when there was a thunderstorm with snow and strong winds which damaged one of the tents at Camp 1. It snowed all the next day and we could hear the mighty roar of the wind in the high crags. The storm continued the following night and a tent pole broke.

Higher on the mountain the advance party had made the route to Camp 3 which was established on 12 June at 6645 m (21,800 ft) on the snow slope above the snow-and-ice arete.

The 13th saw an Indian Army team arrive to remove the body, which was eventually flown out by helicopter. On the following day our new liaison officer, Mr H. C. S. Rawat of Everest fame, arrived at Base Camp with two Sherpas after he had been rushed from New Delhi by helicopter.

A-bove Camp 3 the fixed rope on the large rock face was welcome because of the steepness and unpleasant nature of the rock.

At first we thought we should need only one camp above Camp 3 but it was soon evident that both a Camp 4 and Camp 5 would be required. Because we had lost the poles to one of our high-altitude tents, and needed two more camps, we were short of tents; it was thus decided that above Camp 3 the tents would move up with the climbers.

On 18 June Camp 4 was placed just at the top of the rock face at 7010 m (23,000 ft). Due to the accident only six climbers were in position to climb to the summit so after inspecting the route and attending to the fixed rope above Camp 4, the six moved up to Camp 5.

The route to Camp 5 went past the probable site of Tilman's highest camp and up a tricky rock-and-snow ridge where much of the previously fixed rope was in poor condition. A traverse to the right on an exposed snow slope brought the route to the bottom of the rock cliff, some 40 ft high, which had to be surmounted before Camp 5 was established at 7346 m (24,000 ft) on 20 June.

After a somewhat uncomfortable night (3 in each two-man tent) the six set off at about 5.30 in the morning for the summit. Apart from one short section where belaying was advisable, easy snow slopes led to the summit which was reached at about midday. Unfortunately, clouds prevented good views, although the East Peak presented a magnificent sight as it caught the sun's rays at dawn.

Descent took four days and we had to wait until 1 July, before the porters came. We rested and visited the beautiful meadows across the glacier where the flowers were beginning to bloom.

Four days were required to return to Reni via the Dharansi Pass, including one extremely long day when we descended from Sarson Patal to the Trisul Nala in monsoon weather.

After reaching Lata several of us had an enjoyable feast at the house of one of our 1975 Trisul porters, before eventually reaching Reni late at night.

We spent three days at an inquiry by the Indian Army at Joshimath into the death of Captain Dhillon before we were free to leave. Some then returned straight home and others visited Badrinath, where there was an impressive view of Nilkanth, and the Valley of Flowers in which the monsoon rains were heavy and continuous and obscured much of the scenery.

It appears that many expeditions that enter the Garhwal leave the camp sites, both on the march in and on the mountains, in a mess. There is no reason why a camp site on the march-in should not be left clean. We burned a large quantity of litter and cans with Japanese and Czech labels on them. Burned cans soon rust away. Expeditions going to the Garhwal (and other places too!) should give real thought to the garbage and sanitation problems they cause by their presence. Large camp fires are causing destruction in many areas. The porters seem to be the main culprits. I was shocked at the number of trees that had been felled at Deodi since 1975.

1978 was apparently the first year that goats and sheep have entered the Sanctuary which is supposed to be a wildlife sanctuary. Having seen the damage done by sheep in the Valley of Flowers, I am apprehensive for the future of the Sanctuary. I hope that pressure can be brought to bear on this latter problem by the Indian authorities. Large expeditions should be discouraged since they are disruptive in terms of the number of porters required and in general impact on the area. 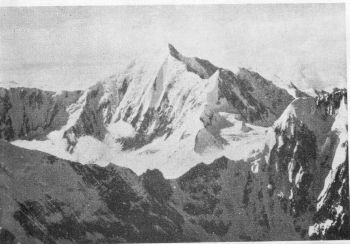 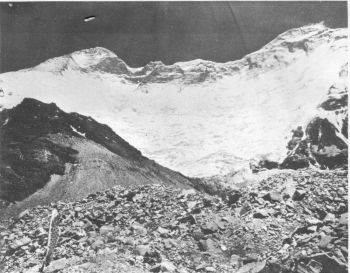 NandaDevi peaks with the centre ridge, seen from South. 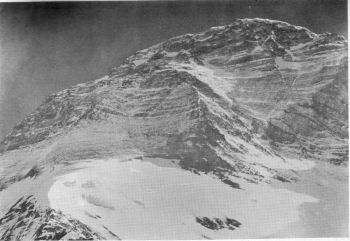