WITH the recent release of Mr J. T. M. Gibson's autobiography, As I Saw It, with its vivid description of his climbs in the area, the draw of Bandarpunch (6316 m) in Western Garhwal was irresistible. The expedition was organized by the Hiking Club of St Stephen's College and the motley eight-member team was composed of the following: P. M. Das (leader), S. K. Vohra, R. K. Bhuyan, Deepak Chandani, Rohan Datta, E. Bharatan, Arjun Gupta, S. B. Gogia as doctor of the expedition. Prem Singh, a Garhwali who had climbed with me before, was the only guide we employed.

The plan was to approach the mountain by its eastern flank through the Chhaian Gad, by a route and style similar to that used by a course from the N.I. M., Uttarkashi, in the ascent made in 1975. However, circumstantially, by the time we were through with the mountain, we discovered-and not without some surprise -that an 'alpine style' ascent had been executed. The peak had been scaled in three days after Base Camp had been established and in just seven days from Uttarkashi. Thereafter, Hanuman a548 m on the Chhaian Bamak, was climbed. The expedition with all its loads on the shoulders of five local porters, and the members, then returned to Uttarkashi by making a seven-day trek over the Bamsaru Khal (4627 m) and past Dodital Lake (3045 m).

The following are the details of the expedition:

The expedition reached Suki (2487 m), the roadhead, from Uttarkashi on 30 May. Using Suki porters we crossed the Khagi Pass (3420 m) on the first day and descended to the confluence of the Son Gad with the Chhaian Gad where we pitched our first intermediate camp. The walk up to the Khagi Pass was enjoyable and we were feted by Dark-grey Bush Chats and Green-backed Tits. From the pass, a clear view of the Gangotri and Jaonli peaks to the south was available. To the west we saw the approach to the Bamsaru Khal, Hanuman and Bandarpunch for the first time, and the modest Pokria-Rurikanda-Bhartiakhuntia peaks stretching from east to west.

I noticed that, the Suki porters were making heavy weather of then loads and was not surprised when we did not reach our Base camp site the next day but halted at a birch grove called Dinara up the Chhaian Gad. In compensation we had a romp through a meadow carpeted with early spring yellow anemones, wine red potentillas and violet irises. Primulas, rosea, moor- croftianas, macrophylla, were identified too. On the true right of the Chhaian, the slopes were covered with blooming simru (Rhododendron companulatum), out of which flew squealing monal pheasants.

Circumstances prompted me to opt for an alpine style attempt on Bandarpunch with four men: Prem Singh, R. K. Bhuyan, Chandani and myself. The attempt would have to be made with Bhuyan's two personal tents-one was a mere fishing tent with, no fly sheet and I pictured two of us waking up soggy with condensation every morning. Just we were toying with the idea of organizing an expedition prayer-meeting for good weather, someone announced that the only serviceable primus stove which had reached Base Camp could not be lit because the pins could not be found. (Has. anyone seen a sackful of cooking utensils and stoves which were stolen from us at the Uttarkashi bus-stand?). There was a frantic search for an hour and not a word was spoken as every corner was combed. As tension built up, it was Bhuyan who broke the spell of silence by relating to us in grave tones, the story of an expedition which turned back from its Base Camp because they had no stove pins. He ended by proclaiming aloud mellifluously that the fate of our expedition would be different, and those of us who had been growling away, turned to look at him. One suspiciously clenched fist was opened and out fell the stove-pins!

On 3 June, with the rest of the team helping in the ferrying, of loads, we established and occupied Camp 1 at 4700 m on the top of the first icefall to its true right.

On 4 June, the summit party carried the same tents of Camp 1 some food for three days, ironmongery, our personal kit. We avoided the crevassed area to our right (and thus the bother of fixing rope on the ice-slopes) by skirting the southern ridge of the mountain and making a long walk up the Chhaian Gad, weaving our way between snow humps and crevasses. Camp 1 was established at an estimated altitude of 5300 to 5400 m, to the true left of the glacier and below the second icefall. Since we were heavily laden I reckoned that we would be able to tackle the icefall faster without loads on the morrow. Besides, early in the morning, there would be less danger of falling boulders too. The route proposed to be taken was up an ice-wall on our right.

Chandani was left at Camp 2 on 5 June since he was acclimatizing badly and complained of headaches and nausea. The three of us left at 6.00 a.m. carrying the ironmongery and emergency rations in two rucksacks. The ice-wall was climbed in forty minutes without fixing any rope or driving in a single piton. Steps were cut and we free-climbed the mixed rock and ice sections.

Above the ice-wall, we went past a smaller ice-fall (the third on the glacier) from our right and crossed the cwm to the neve slopes of mountain to our left. It was 10.00 a.m. already and we stopped for a rest and roped up for the first time in the day.

The immediate obstacle was a huge bergschrund across the entire east face of the mountain. Above that, there appeared to be two feasible routes: to the southwest and on our left, up a slope of ice, snow and a rib of rocks leading towards the summit; to the west, along the main ridge joining Bandarpunch to an unnamed peak ('White Peak') and the Black Peak to the north. I chose the former route since the latter looked very long.

The problem bergschrund 'went' to me and we went up a long slope of 35 degrees which at places grew very steep. Progress became slow, however, with the afternoon sun beating down upon our east-facing slopes. Then came the section of rock, which despite the steepness, provided a welcome change from the snow. We climbed with belays but did not fix rope.

At 4.45 p.m. clouds engulfed us but I reckoned that we were close to the top. However, since climbing time was running out and I had begun to go slow, I detached myself from the rope and told Bhuyan and Prem Singh to climb on but to turn back within an hour.

Though the upper section of the mountain was enmeshed in cloud, the weather was otherwise kind - no lashing winds or snowfall. I waited anxiously for the return of the two and perched myself with my back against the slope, a little below the end of the hairline of rocks going up to the final ridge which was hidden by the clouds. Even while I worried about the possible consequences of an ill-prepared high bivouac, the two of them climbed up towards the right, bypassing a cornice, and stood on the summit at 5.00 p.m. approximately. They took a score of steps from the main summit to a high point on their left which seemed lower, before retracing their steps. On the summit they tossed coins and toffees and without wasting any time, they came down to join me.

Fortunately, we were able to make a very rapid descent from the face of the mountain. By the end, Bhuyan was all but done in and I felt glad that I had rested below the summit and could be of use to the party's descent. We reached the top of the ice- wall while there was still enough light to see, thanks to the long period of daylight at this time of the year. Moreover, there was no danger of falling boulders since as in the early morning, the cold had frozen them to the ice. With the aid of a torch, using our steps cut in the morning and belaying each other, we descended. On the rocky bits there would often be the sound of crampons grating; sparks would be seen as someone would skid for a few feet before the rope would become taut and his balance would be recovered. By 8.30 p.m. we were able to join Chandani at Camp 2 without any mishap.

On 6 June, our fourth day out of Base Camp, we were met at Camp 1 by the rest of the team with a tumultuous reception as we returned to Base the same day.

On 8 June three members, Vohra, Bhuyan and Chandani, took their leave of the expedition. They had pressing problems - leave running out, wedding etc. - but all the same their departure was depressing for the rest. Determined not to let the expedition fall to pieces, I sent the whole team including the cook, with ample food and tents, to occupy Camp 1 for an attempt on a lovely peak directly to SSE. of Bandarpunch. Mr Gibson refers to it as Hanuman (5548 m).

Having sent off the team, I crossed the river to the west of Base Camp and spent a delightful morning walking up the meadows and spurs on the other side. The lower slopes were white and violet with blooming R. campanulatum, while the dark green shrubbery of R. anthopogon on the upper slopes were fairy- bulb-lit with tiny cream-coloured flowers. One has to see a sight like this to realize what inspired Leslie Stephen to write 'A Bye- day in the Alps'.

This region is not devoid of bird life either. Some of those we spotted were: Snow-pigeon on the meadows; Red-billed Choughs; the Himalayan Griffon Vulture; Alpine Swifts; Whistling Thrushes; pipits; Monal pheasants: Whitecapped and Plumbeous Redstarts; a Rosefinch was spotted on the rocks at Camp 1.

On the next day 9 June Gogia the doctor and I joined the team up in Camp 1 in foul weather.

That afternoon there were winds and heavy snowfall at Camp 1. The blizzard continued - with only brief respites - throughout the night of 9 June. Gogia found the cook to be suffering from a mild attack of pneumonia and began treating him. By 4.00 p.m. on 10 June, when the wind increased its fury and all tents but one had collapsed, I gave the order to evacuate. The whole team moved down to the Base Camp carrying only personal gear. The rock sections were tricky on the descent and we fixed a rope for 20 metres.

However, on 12 June after a day's rest the team climbed Hanuman directly from Base Camp having made an early start that day. The summit was reached at 2.00 p.m. by ascending a long ice-and-snow ridge from the northeastern side. On it we witnessed the curious sight of flocks of butterflies fluttering past us effortlessly as we laboured below.

Those who reached the summit of Hanuman were: E. Bharatan, Rohan Datta, Arjun Gupta, Prem Singh and P. M. Das. The same day we wound up Camp 1 and brought down all loads.

From 4 June to 21 June the expedition trekked through exciting country reaching Uttarkashi by a route different from the one used for the approach to the mountain. The team crossed the Ramsaru Khal (4627 m) and walked via Gidara grazing grounds (red bear country), camping on rolling green meadows and then descending through thick forests (where some members got lost for two days) to Dodital. The latter is one of those rare places; where you can have a whale of a time by catching trout! 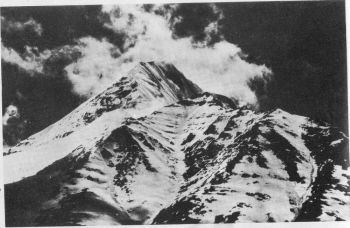