KANGCHENJUNGA is India's highest mountain and the world's third highest at 28,208 ft (8598 m). It rises miles above sea level. Contrary to common belief, Kangchenjunga does not lie on the great Himalayan range which forms the boundary between Sikkim and Tibet but is a separate group of mountains 10 km south of the main range. Even though attempts on this mountain started before Everest was discovered it remained unclimbed even after Everest. Sir Joseph Dalton Hooker, the renowned British botanist, visited its slopes in 1849. Fifty years later Sir Douglas Freshfield went around Kangchenjunga to find a suitable way to its summit. His considered opinion was that this mountain is surrounded by a 'Demon of Inaccessibility’.

I became interested in Kangchenjunga when I was posted to the Himalayan Mountaineering Institute at Darjeeling. Fully realizing the superstitions about this mountain I called on the Chogyal, then the Maharaja of Sikkim. When I made a mention of an Indo-Sikkimese Expedition to Kangchenjunga, the Maharaja got up indicating that the audience was over, and saying, 'How dare you climb the mountain we worship?' I ventured to say that like the Britishers we will leave the top 6 feet untrodden. His sarcasm was biting when he said, T have heard that one before. The tallest Britisher who got to the summit was 6 ft 3 in. and his head was above my God's head.' I had no answer. To bring home the point further, a few weeks later he invited me to Gangtok to witness Lama dances held in worship of the deity of Kangchenjunga. I knew that I had no chance of ever approaching this mountain. Due to recent political changes the Chogyal lost his power and Sikkim became an integral part of India and I once again started dreaming of an expedition to this mountain. The expedition materialized due to a chance meeting with Gen. T. N. Raina. During a dinner conversation the General remarked that half of the Army is deployed in forward areas and yet no big expedition has ever been launched by the Army itself. Here was my opportunity to fulfil my life's dream. I straightaway proposed Kangchenjunga from the Sikkim side.

The preparations for the Expedition started straightaway. We held a selection camp in the November of 1978 in the Zemu glacier area. The best of the Army was selected. While hectic preparations were afoot some of the leading mountaineers of India thought that India had not yet reached a stage in technical climbing to take on the world's most difficult mountain from its most difficult side. But the Army hierarchy, and particularly the Chief, put implicit faith in us and let me carry on with the expedition.

All preparations made, the main party left Delhi on 7 March 1977. We established our Base Camp in the area round Green Lake at a height of 16,190 ft. We found no technical problems in reaching Camp 1 which was established on 4 April at the height of 18,000 ft. The first obstacle was in the form of an icefall. This icefall technically speaking was not as bad as the one on Everest but was far more dangerous due to the constant hazard of ice avalanches and falling boulders. Many a time the members and the Sherpas had narrow escapes from the bombardment of stones and ice avalanches. Once we had created a store dump at the foot of the icefall : a huge avalanche broke off and buried our 50 loads for ever. This affected our logistics tremendously.

After Camp 1 we had to gain the crest of the deadly Northeast spur. The face was very steep with fluted ice-gullies and was swept regularly by avalanches. Gigantic blocks of solid ice, breaking off high above, swept down the shoots and spirals, down in two-kilometre drops of thundering destruction. It looked so dangerous that in 1929 the Germans almost turned back without climbing it. There was great jubilation in our camps when we overcame this obstacle on 8 April and established Camp 2 at 19,500 ft. But this jubilation was short-lived. When a group of five consisting of Capt. Kumar, Norbu, Kura Ram, Sukhvinder Singh and myself, was coming down the crest, Kangchenjunga struck its first deadly blow. While coming down the fixed rope I heard shouts for help from Capt. Kumar, who was just ahead of me. And then I saw a rucksack bulleting its way down one of the shoots. I knew that some serious accident had happened and my heart sank.

When I was about ten metres away from the scene of the accident I saw Capt. Kumar standing hale and hearty with a lot of blood splashed on the snow. When I came down the vertical rock step I found to my horror Sukhvinder Singh lying dead. Normally expeditions bury their dead in the snows, but being an Army expedition, we had to bring our dead down at the cost of other lives as the Indian Army never leaves its dead behind even in war. The tremendous risks we took were justified as they were taken to uphold the traditions of the Army. It took us three days to bring the body down to the Base Camp where it was given a military funeral. The morale of the team reached its lowest ebb. It was here that the Army discipline and the fine training inculcated in its soldiers over the years came to the fore. This cost us a loss of 15 precious days from the already very short period of climbing available to us. We regained the ridge with heavy hearts, but committed spirits. With that state of mind we had to face the deadly spur which climbs skywards for thousands of feet in one unending spire of broken twisted ice. There were towers piled upon towers, cliff upon cliff, huge vertical columns which tapered like spires and shining curtains festooned with icicles, hanging down the precipices from the cornices above. There were great bulges and chasms wrenched by the wind and cold into fantastic mushroom shapes which had the likeness of night monsters. Tons of ice had to be hacked away from sheer faces to make routes. The nylon ropes were flung all over the place to secure the climbers from falling into the sheer depths below. There were cornices which could not be climbed in any way. The climbers made tunnels to surmount these. It was one of the greatest fights between man and mountain. While this fight was in progress Kangchenjunga used another weapon-blizzards and storms. Day in and day out the weather was furious. Later we found that this weather was not confined to us but was true all over the eastern Himalaya. According to experts it was the worst weather seen in living memory. Nine major expeditions in Nepal were sent back. But the brave members of my team inched forward. They suffered cold feet and great privations. Two of them had to be evacuated with second-degree frostbites. But this did not deter the others and finally on 12 May we established Camp 4 on top of this deadly spur at a height of 21,700 ft. These 2000 ft of climb at this altitude took us 27 days. In normal climbing this can be covered in four to five hours. Now our hopes for the summit rose. We still had a chance. For the first time I began to think about the summit attempt. I pulled down the first summit party consisting of Major Prem Chand and Nima Dorjee Sherpa to the Base Camp to recoup.

While the summit team was resting at Base Camp work on Camps 6 and 7 was being done by other members. And now Kangchenjunga used yet another weapon-High Altitude. People suffered from lack of oxygen. Every now and then the parties returned sick and done in. Five people in all were evacuated due to high-altitude sickness. But the team laboured up. When Camp 5 was opened the second summit team of Capt. Kumar and Norbu was also pulled down for rest. Camp 7 was established on 26 May at a height of 26,250 ft. Now we needed only one temporary camp to be established by the summit party on their way to the top. And then another catastrophe took place. Eight top Sherpas were sent to Camp 7 for carrying loads with the summit party to the last camp. These people returned to Base Camp on their own as they found an obstacle beyond Camp 7 which they thought would take at least seven days to climb up. I still remember that fateful day when they came to my tent at Camp 5, clutched my hands with tears in their eyes, as if saying that the 3 months of hard work, the risks taken, the life lost, had all been in vain. They were convinced we could not open the route to Camp 7 before the monsoon would hit us within the next 5 days' time. Next day Major Prem Chand and I went up to Camp 7 and beyond and concluded that the obstacle-a one-km-long knife-edged ridge-should not take us more than 2 days. But how were we to carry the loads to Camp 7? Our topmost Sherpas were at Base Camp and it would take them 5 days to return. By then it would be too late as we were racing against the monsoon. We had available with us two members and two Sherpas. They were constituted into a support party and on 30 May the summit party and the support party established Camp 7 on the North ridge at 26,250 ft. And now they were getting the full blast of the westerlies at over 100 km an hour. Their light tent could not stand these winds and was torn while it was being pitched. The support party returned, leaving Major Prem Chand and Nima Dorjee Sherpa at Camp 7. These two had a very uncomfortable night. They slept with their boots on, got up in the morning at 4, tried to light their stoves, but failed. In desperation they decided to leave without drinking anything. When they tried to fix their oxygen regulators they found that one of them was leaking. Luckily, the support party was carrying a spare one which saved the situation. Carrying two oxygen cylinders they started climbing. Very soon Nima collapsed, saying that he could go no further and asked Prem Chand to go alone. Major Prem Chand checked the oxygen apparatus and found that Nima was not getting any oxygen flow. He set it right and they began climbing again. At 7 o'clock they left one of their half-used oxygen cylinders to be used on the return journey. They slogged on and on, in deep snow and fierce winds. Sometimes the winds were so strong that they were pushed off their feet. At 12.30 they found that they were still nowhere near the summit. They paused. The time for the greatest decision of their lives had come. Should they carry on and risk the fate of Mallory and Irvine and never return to tell the tale or should they return and put to nought all the efforts of the last three months? They decided wisely to postpone the decision for a little longer. In half an hour they found themselves on the dome of the summit. Now the final decision was taken. They would only return after climbing the summit. They remembered the promise the team had given to the people of Sikkim. They left the last 6 feet untrodden. They hoisted the flags, took pictures and returned on Camp 7 in darkness at 8.20 in the night.

The second summit party, consisting of Capt. Kumar and Norbu, was poised at Camp 6 to make the next attempt. But by now the weather had deteriorated further. It was now my turn to take the hard decision. I decided for the safety of the second summit party and the others on the mountain to close down the expedition. I thus called down Capt. Kumar and Norbu. 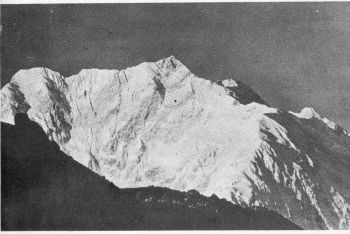 1. Kangchenjunga from the East. 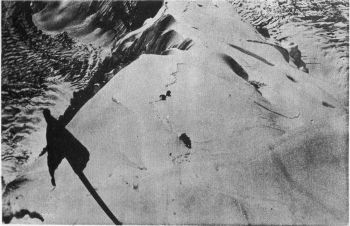 Route between Camp 5 and 6 on Kangchenjunga. 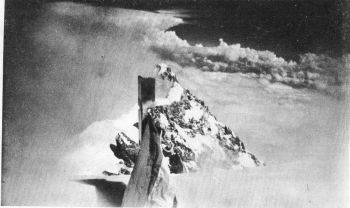