SOUTH PILLAR OF DHAULAGIRI I

On 17 May 1971, we had succeeded in conquering Manaslu by a new route on the west wall.[1] In this expedition, most of the climb had been a struggle with snow, and there was less - rock- climbing than we expected. So, next time, we wanted to find a more difficult rock-climbing route in Himalaya. And the south wall of Dhaulagiri I loomed before us.

In spring 1975, we selected a climbing team under the name of Tokyo Metropolitan Mountaineering Association Himalayan Expedition, most of whose members had been in Manaslu West Wall party, with the object of finding a new route on the south pillar of Dhaulagiri I. We found a possible route-the south pillar-in the huge rock zone, 2000 m high between 5500 m and 7500 m. The route was established very rapidly and the condition of the members was also very good. Camp 3 was made at 5900 m and were climbing higher to set up Camp 4 at 6600 m. The route from Camp 3 to Camp 4 was the most difficult part of the climb, with a big rock-wall, 300 m high, to be surmounted from 6000 m to 6300 m. While we were climbing the rock-wall, suddenly a large amount of snow avalanched and Camp 1 was crushed. We lost two Japanese members and three Sherpas. We stopped our climb and went back to Japan.

But we still hoped to climb the same route again. We organized a climbers' group named Yeti Doujin, in preparation for an expedition. In spring 1978, a new party with 13 Japanese members, including members of the previous expedition, set out from Japan in February.

We left Pokhara at the end of February. After twenty days' marching along Myangdi Khola, we made our Base Camp at 3700 in on 20 March.

We could only move on the good-weather days and established Camp 1 on 28 March on the snowfield over the icefall at 5200 m. This was on the site of Camp 2 of the previous expedition.

To avoid avalanches our Camp 1 was constructed 1500 m higher than Base Camp. This was an exceptionally long distance in Himalayan climbing history. To carry up 20 kg of baggage at one time from B.C. to Camp 1 was difficult, so we made a dump in the middle of the route. Base Camp members carried baggage from B.C. to the dump, Camp 1 members from the dump to Camp 1.

From Camp 1 we broke through an ice-ridge of 60 degrees' inclination and on 7 April we made Camp 2 on the snow ridge at 5800 m. Above Camp 2 was a very steep rock-wall zone, almost without snow. We used a winch and wire ladders, as had been installed in the previous expedition, for transportation. Occasionally we needed A2 technique. We passed the highest point reached by the previous expedition and went higher.

We supposed that above 6300 m there would be a comparatively easy snow-wall. But in fact the ice-wall, with a slope of over 60 degrees, and the steep rock ridge continued. There were several obstacles in our route. We climbed little by little every day. On 14 April, we set up a Temporary Camp 3 at 6350 m. We made this camp because it was a difficult route from Camp 2 to Camp 3, and every afternoon we were prevented from moving by snowfall. Two more days allowed us to make the route to the place selected for Camp 3 at 6500 m. On 17 April, we set up Camp 3 on the snow clinging to the rock ridge.

The technical difficulties of the climb from Camp 2 to Camp 3 can be guessed from the fact that among the eleven high-altitude porters whom we had chosen very carefully, only three could climb the wire ladder. So we Japanese members groaned under the burden of transportation.

Except for the difficulty of transportation between Camp 2 and Camp 3, route-making for Camp 4 proceeded smoothly.

One of the Japanese members, Naganuma, reached Camp 3 on 18 April and made the new route for three days. While descending to Camp 1 for a rest, on 22 April, suddenly he fell from the ridge and died at once. We could not bring his body down because of the steepness of the route. We were obliged to bury him in an ice-crevasse on the rock ridge. The next day, the funeral ceremony was performed by the Camp 3 members.

Naganuma was one of our strongest members, so his death was a great shock to us. We were in deep grief, and in no mood for climbing. But we recovered our spirit and on 26 April, resumed climbing for the summit. The members carried baggage with the help of fixed rope. The route-making party climbed steadily higher and higher. On 29 April, we reached the base of the Fist Rock (because seen from Camp 1 it looked like a clenched right hand) at 7000 m. The Fist Rock was only a rock-wall of 150 m in height, but it was the most dangerous part in the route of this expedition. Under our feet there was nothing except a very steep rock-wall directly to Camp 1 for 1800 m. Every day acrobatic route-making was continued at the limit of human ability. Occasionally we could gain only 15 m in a day. But the members were tenacious. At last we rose above the Fist Rock.

On 3 May, we set up Camp 4 on a gentle slope at 7500 m. We began route-making for Camp 5 and to carry up the baggage to Camp 4. On descending the Fist Rock we were obliged to hang free, 4 m away from the cliff in the air.

Looking up at the rock slab zone above Camp 4 from below, it seemed to be a rather gentle slope, easy to climb. But in fact the inclination was very steep and its height was more than we expected. Moreover, we were weakened by the effect of height. So we had an unexpectedly trying fight. We did our best for three days and on 6 May evening, we succeeded in passing this slab zone and climbed a very steep ice-slope for 200 m to reach the plateau leading to the summit. Thus we finished climbing the south pillar and had only to attack the summit.

We could see the summit from Camp 5. We thought that given good weather, we would be able to reach the peak. The night before the attack, we had heavy snow and strong winds. There was 20 cm of snow at Camp 5, but with dawn, the wind and snow calmed down. It became ideal weather for an attack. At 5.30 a.m. Shigeno and Kobayashi left Camp 5. Unexpectedly there were small rock peaks on the plateau which had to be climbed, though the route was very easy as compared with what lay below. They walked in ankle-deep snow. Finally at 11.25 a.m. they reached the summit of Dhaulagiri I (8167 m).

Thus we won the summit at last at a cost of six victims. Four years had passed since we first planned the climb.

On 11 May, the second attack party-Shimizu, Kato, Yoshino and Ang-Kami Sherpa-four members, reached the peak. On the summit they pulled out some red fixed rope-12 - 13 m long- and a nice Cassin piton. Probably they had been left by the Italian party who made the fourth ascent.

On 14 May all members were back at Base Camp. 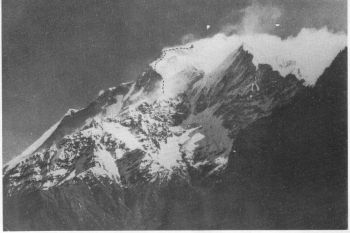 Dhaulagiri I from Myangdi Khola. Peak on the right is Jirbang. 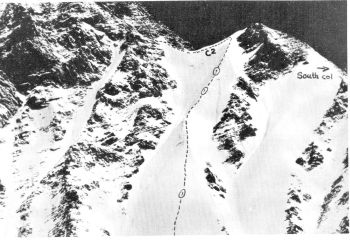 The Fist Rock and the Upper Slab Zone seen from 6600 m. 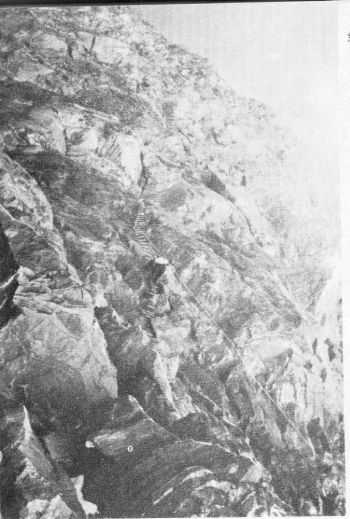