PROGRESS : On 11 March 1978 flight from Kathmandu to T'umlingtar in Eastern Nepal. March in with 110 porters and 3.3 tons luggage via Khandbari, Num, Ala till Bungim (4 days). In Bungim-the last inhabited village-change of porters is necessary because the hill porters are not used to carrying loads at the higher altitude; the Kongma La, a pass more than 4100 m high has to be surmounted. Bad weather and unusually heavy snow (2-3 m) caused 55 porters to turn back. In a kind of relay system the loads had been brought over the pass from Bungim to Pematak within 7 days. The members of the expedition also carried loads. We equipped the porters with sun-glasses, blankets and shoes. Their performance in the face of extremely bad conditions deserves utmost appreciation. According to their information no Makalu expedition had had to tackle such bad weather conditions on the Kongma La. In Pematak 40 more porters returned because they had run out of food. The remaining 15, we fed out of our own stock. Also in the Barun valley towards Ribuk and the Base Camp there were immense masses of snow, that required unusual efforts to break the trail. On 29 March a group of trail-breakers (Ang Chappal, H. v. Kaenel, H. Warth) reached the Base Camp after 8 hours' hard work from Ribuk. Base Camp was established on 31 March by H. v. Kaenel, K. Diemberger, Sherap and H. Warth. It was the 20th day after our departure from Tumlingtar!

It was another week before all loads had arrived at the Base Camp and we used the time for exploration. In view of the loss of valuable time during the approach march and the dangerous-looking serac zones of the icefall on the SE. we decided to attempt the ascent on the NW. side which was more or less the route of the French expedition of 1955" led by Jean Franco which succeeded in the first climb of Makalu. Since then, no team had succeeded in climbing the mountain by this route.

On 3 April, K. Diemberger and H. v. Kaenel found the place for Advanced Base Camp (ABC), which was established on 4 April by Nga Temba, Nawang Tensing and H. Warth. The next day they found the route to the upper Chago glacier where On 11, 12 and 13 April, Ang Chappal and H. Warth provided the partially difficult route to the so-called ice balcony with about 300 m fixed rope and pitched Camp 2 on 13 April at 7000 m height. In the following days the weather was not too good. Therefore, K. Diemberger, H. v. Kaenel, Nawang Tensing and Nga Temba could not reach the Col ('Makalu La'). The days had been used for extensive ferries to Camps 1 and 2. After long and difficult climbing and fixing ropes (300 m) on the steep rocks leading to the Col by H. v. Kaenel, K. Diemberger, Nawang Tensing, Nga Temba, Ang Chappal and H. Warth, these latter . two and K. Diemberger succeeded in establishing Camp 3 on the Col at a height of 7410 m on 24 April. This completed the first part of the route.

H.V. Kaenel and Nga Temba explored the further route towards Camp 4. After four nights above 7000 m they descended with slight health deficiencies to Camp 1 for a longer rest. It is now the turn of Nawang Tensing and K. Diemberger who carry oxygen bottles to a depot between Camp 3 and the forthcoming Camp 4 and who are going to stay for a longer time in Camp 3 in order to give eventually necessary help to the summit team.

On 29 April Ang Chappal and H. Warth climbed from Camp 2 to Camp 3. Supported by Nawang Tensing (trail-breaking, carrying load) they reached on 30 April the place for Camp 4 at 7950 m. They slept there without using oxygen. Nawang Tensing descended to Camp 3 on the Col. On 1 May, at 7 a.m. Ang Chappal and H. Warth started for the summit. Since Ang Chappal felt uncomfortable wearing the oxygen mask and breathing through it he decided in Camp 4 to try the climb without the help of artificial oxygen. Therefore, H. Warth had to break the trail on the whole route which was very strenuous on the vast snow-slopes. With nearly each step he was breaking in up to his thighs and his hips. This effort was only possible by higher rate of oxygen support (3 and 4). At 8250 m they reached the 45°-50° steep and about 200 m high couloir leading to the upper part of the E. ridge. The snow conditions in the couloir were even worse. A difficult rock barrier had to be climbed and prepared for the descent and upcoming parties by a 50 m long rope. Finally, at 1.30 p.m. the two climbers stood on the very sharp snow ridge leading to the two summits of Makalu. Carefully belaying each other they had to climb over some sections as steep as 70° to the very small main peak, which they reached at 2.45 p.m. (8481 m). An old yellow oxygen bottle proves a former victory. The view towards North (Kang- chungtse, Chomo Lonzo, Tibet) and South (Base Camp, ABC, Chamlang, Hongu mountains) was excellent. In the West and East clouds prevented views towards Everest, Lhotse and Kangchenjunga. There was nearly no wind at the summit, which enabled the two to stand 45 minutes on it (Or rather round the summit because it is extremely sharp). At 6 p.m. they arrived without accident in Camp 4. The effort of Ang Chappal is especially worthy of mention : without artificial oxygen he had reached the proud summit of Makalu after carrying heavy loads and only three days' rest since our departure from Tumlingtar. The next day the two climbers met in Camp 3, Dr K. Landvogt and not as they had expected K. Diemberger and Nawang

Tensing. Both of them had had to descend to ABC, K. Diemberger later even to the forests at 3700 m because of throat inflammation and high-altitude cough.

On the same day Ang Chappal, Nga Temba and Nawang Tensing started to clear the camps and to carry down the equipment. On 23 May the whole team was together in the Base Camp. On 25 May the expedition started the march back to Tumlingtar. On 3 June it reached Kathmandu. 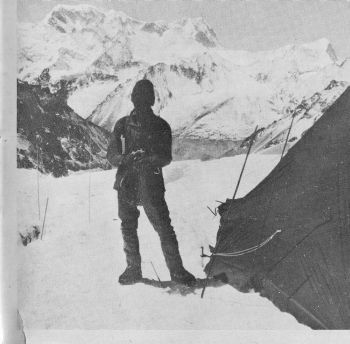 Chamlang from Camp 1 on Chopo glacier. 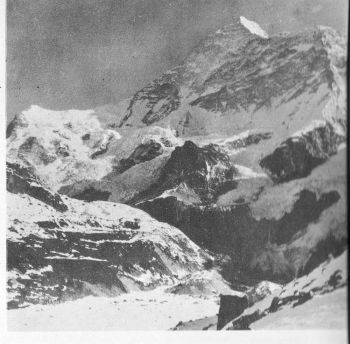 Makalu South Face and West Pillar from Base Camp. 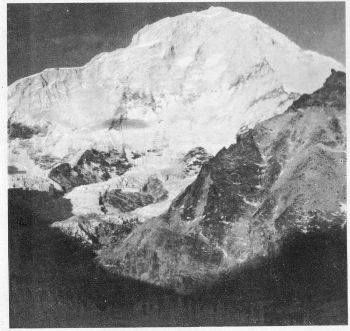 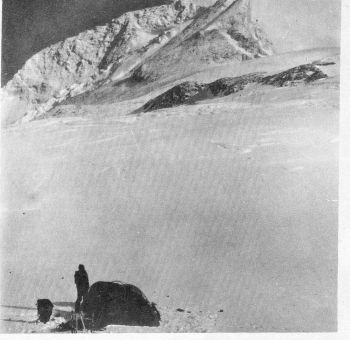