PHAWARARANG -AN ASCENT IN KINNAUR

RANG means a mountain in the Kinnauri language. Phawara- rang, a mountain of a modest height (6359 m), is tucked away at the head of the Tiruing Gad - an eastern tributary of the turbulent Sutlej. The area is unvisited, the mountain unexplored, weather predictable and the rock generally good.

An overnight bus ride from Simla, via Rampur Bushir, brought us to Akpa. We crossed the mud-coloured river Sutlej to camp amidst pines surrounding the local veterinary hospital at Rispa. And met the ponies. The ponies, gathered from high villages about Pooh, rejoiced feeding off the lush hillside, propelling themselves and the nagging flies with uniform switching of their tails. The pony men wandered amidst the boulders, poking and feeling the loads and before the cold and the shadows arose from the boisterous river, were huddled about their slow-burning fires and chillums.

I wandered for a long time amidst the tag-festooned chilgoza pine grafts before finding a corner of the primal forest where it met the river. All night the river boomed and chuckled and hurried past in deep, free rolls; with the dawn the breeze freshened and filled my bag with sand. I sat up until it was time to begin walking. We walked along the south bank of the river, along the shoulder of a steep-sided forested spur, across remains of a moraine, along a well-worn path until Rispa. Through the village, along the stone-walled orchards we walked across water- filled lanes, across tree-shaded slopes and could see below us the ponies plugging their way down beside the river. We descended to the junction of Tiruing with Sutlej.

From Tiruing we watched the ponies slowly wind up the steep hill to the crest of the spur leading to Thangi. We took a straight pull up the cliff-sided gorge to reach Thangi, short of breath, occasionally on all fours, but ahead of the ponies.

Thangi squats precariously above the gorge of Shankvi and Tiruing Gad; a large hill village huddled at the foot of a bare mountain, it looks across a lush green patch of cultivation to the north face of the Kinnaur massif. In the evening the pony- men melted amidst smoking hearths and we too were glad that our wandering the narrow-angled village streets had not roused the hill gods or jarred the inhabitants. Particularly pleasing was the welcome of trusting, fine featured and clear complexioned girls we encountered weaving a carpet or tending the fields.

The villagers were doubtful of the track beyond, and we arranged to send a party of members and muleteers ahead. The morning came but no muleteers. Eventually a few were roused and the group set out ahead of the ponies, clearing the track of boulders and shoring up places which had caved in. The ponies had to be unloaded twice, their loads humped across and re- fastened. Friskier ones among the ponies, once across the dicey patches, did not wait for their loads and carried on up the narrow track. Eventually we had a string of unladen very superior looking ponies followed by unhappy, belabouring muleteers! Last of the ponies and members reached the night's halt at Tugrum at 10 p.m. Crowning the day's happenings arrived a brief midnight shower drenching the baggage, men and mules.

Next morning it was a short walk to Shurtingting and at last the mountain walls retracted. We crossed the Tirung Gad across a proposition of fresh-cut pine logs and wobbly boulders. We had to decide the route to Phawararang and the location of the base camp. We camped above Shurtingting Dogri. Three of us climbed the ridge east of Shurtingting for a closer look at Phawararang, standing massive and veiled, across the valley.

After an hour's scrambling we gained the crest of the ridge and climbed along it for a view of the mountain. The summit ridge of Phawararang lying east-west is about a kilometre long and is heavily corniced to the north. In one crenellated slice of a thousand metres Phawararang drops to the Damana glacier to the north. Off the summit feed a number of glaciers and separating these are five prominent ribs splayed east to northwest. The summit is reached along one of the ridges with varying degree of skill and risk. Clouds prevented us from having clear uninterrupted views of the mountain or a possible route to the summit. We decided on a Base Camp northwest of Lalanti. Behind and below us were the villages of Charang and Kuno. The latter looked a perfectly set oasis amidst the wind-beaten brown draped hills and the silver sands of Kuno Gad. We descended along the disused Charang-Chitkul track. A recent landslide had torn off a chunk of the track and I made a direct descent to the Shurtingting Gad, and reached the camp last.

The last sheep had been slaughtered; being hungry and excited, the dinner was ordered and over when we espied the local police post officers we had invited for dinner walking into the camp. Hightly they did not stay until the cook rustled another supper. And they never forgave us.

We walked up the Shurtingting Gad to La Gur Gur and then contoured along the base of Pt 5355 m. Coming upon a grazing boundary pillar we found a bundle of Janata Party hand-bills buried under a stone! Leaving these aflutter in the wind we walked on and set the base camp at 4400 m on a boulder-strewn spur above the Jabgaya Garang and turned east to climb to the south ridge. It looped gradually for about five km to join the summit dome: a rock gendarme sitting across the ridge appeared to block the way. We dumped our loads and descended along the rock spur straight to the base camp. 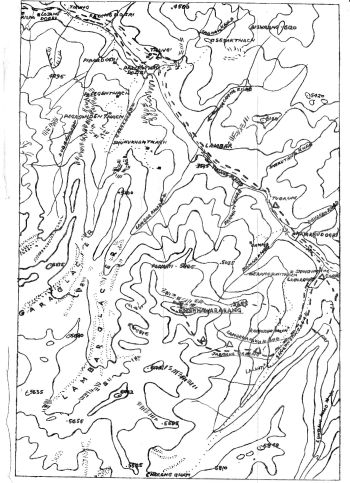 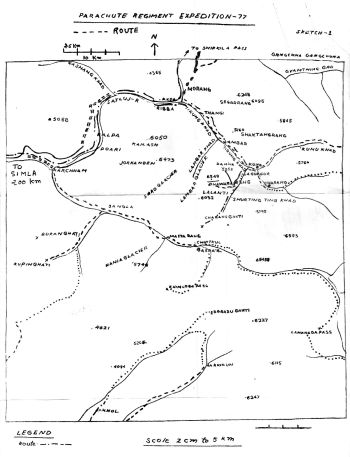 In two days Camp 1 was set and five of us stayed up to open the route to Camp 2. Next morning it was an easy, steep walk to the rock gendarme. The gendarme blocked the way and after two false moves I found a possible line and fixed 50 m of rope. The rock was rotten and the pitons refused to hold. We used a double rope and when two of the pegs came off, Japan Chand did a superb job of holding me. We were now wet and cold and returned to camp before sunset.

Cooked rice and meat, rope, tents and a note had been left by a ferry. There will be a repeat ferry tomorrow and mail. Next day the gendarme required fixing of another 50 m of rope and we were across on the ridge. We descended to a col and amidst flurries of fine powdery snow and gusts of wind erected two tents. We had no weather forecast in the evening and made plans for the summit next morning. We ate little.

The ridge made a superb vantage point. To the north, were arrayed sharp-toothed unclimbed, unnamed minarets offering good exciting climbing. And to the south lay, above the low evening mist, another host of unclimbed unnamed mountains of 6000- 6500 m. Lost amidst these were the two mountains at the head of Baspa I had climbed last year. Under the evening sky and darkening valleys the mountains grew tall, unfamiliar. It was an extremely cold and windy night: an hour to thaw our boot- covers and we left camp by 7 a.m. A gradual ascent up two rock buttresses and by 9 a.m. we were on the summit dome. The sun warmed the hillside and even the clouds dispersed for a while. We climbed in two ropes and reached the crest of the summit ridge by 11 a.m. The ridge was narrow and wafery. The wind had died and the cloud spread itself in a whiteout and hid the landscape. No views and no photographs. After1 a gradual canted walk, the ridge dipped and rose after 50m to emerge in a delicate cone, faintly visible amidst the whiteout. We walked up and now waited for the cloud to clear.

I hate to get up a summit and be deprived of the view. While waiting, I heard a sharp swish and turned to see a wisp of cloud rising inches away from where Phom Bahadur stood. A large chunk of the summit cone had quietly broken off. We stamped about waiting for the clouds to clear and, disappointed, began the descent. The sun had warmed the snow and our footsteps turned into troughs. We descended, one at a time, across and down the wet loose snow and reached Camp 2 by 7 p.m. Sood and Japan Chand had preceded us by an hour.

Due to bad weather no ferry came up; we took turns to brew and drank quantities of liquid ourselves and filled Sood who was unable to do so himself. We had been observed descending late from the summit by Camp 1 and early next morning another three climbers reached Camp 2. Weather appeared settled and Gill, Lali Bakshi and Roy made their ascent on 17 June. They left camp at 5.30 a.m. and were on the summit by 11 a.m. It was perfectly clear weather and they were able to follow our steps to the summit. The party had no camera. They descended to the Base the same day. A third party moved on 17 June from Camp 1 to Camp 2 for their summit attempt on the 18th. Due to two members being indisposed, the attempt was called off and the party returned to Base.

Gurung and I went up for reconnaissance of the Damana face of Fhawararang and climbed Pt 5355. Low clouds deprived us of views of the mountain but we were rewarded with the sight of a herd of five Blue Sheep Pseudois nayaur climb ahead of us to Pt 5355 and then wait patiently under a shelf for us to depart.

An attempt by three members to cross Charang Ghati 5240 m on the way to Lamkhaga, Harsil, Valley of Flowers and Joshi- math was abandoned after the members spent eight hours ploughing across soft wet snow and ducking rock-falls. Spring rain had hit the area and loosened rock and snow off the hillsides. The camps were dismantled by the 21st and ponies for the return arrived on the 22nd. We left Base Camp to reach the road on 24 June. 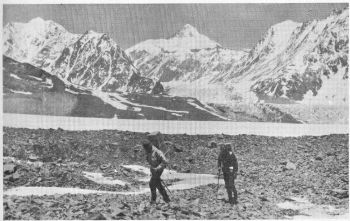