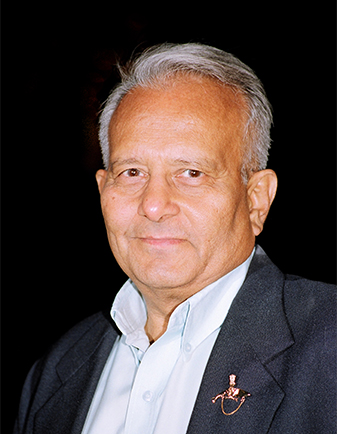 Harish Kapadia has made a unique contribution to our knowledge of the Himalaya: as Editor of the Himalayan Journal, one of the most authoritative and comprehensive records of exploratory activity in the Himalaya; through his numerous books and as a leader and organiser of countless expeditions over the years. Moreover, he is a rare breed, who has always written with deep knowledge, about his Himalayan journeys in 17 books and several articles, works on the Himalaya that are erudite and practical, skillfully combining historical, geographical and practical guidance to increase our understanding of the region.

He began climbing and trekking in the range around Mumbai, the Western Ghats. His first visit to the Himalaya was almost 50 years ago and he continues visiting the Himalaya till date. His main contribution to Himalayan climbing has been to explore unknown areas and open up climbing possibilities. He has personally climbed more than 30 Himalayan peaks, many of them first ascents. Moreover, he has crossed more than 150 Himalayan passes to explore different valleys. As an expedition leader, he has initiated a series of joint expeditions with climbers from the United Kingdom, France, Japan and the United States. The quality of exploration and the detailed reports have provided superb background information about these areas.

He has explored the Siachen glacier and the East Karakoram, and now the unknown Arunachal Pradesh, backed up with excellent documentation and writing. He managed this while he was a businessman — but mountains and exploration came first so when the need was felt, he sold his successful family enterprise to devote all his time to his first love — mountains. He continued his passion despite two serious personal injuries and a major family setback in the tragic loss of his young soldier son to terrorism in Kashmir.

Harish is Honorary Member of The Himalayan Club, and several leading Alpine Clubs: London, Japan, American and Polish. He was a Vice President of the Indian Mountaineering Foundation (1997-1999) and was awarded the IMF Gold Medal in 1993. It is most fitting, that in the year 2003, in which the 50th Anniversary of the first ascent of Everest was celebrated, Harish Kapadia was honoured with the Royal Medal, the “Patron’s Medal”, by the Royal Geographical Society ‘for contributions to geographical discovery and mountaineering in the Himalaya’. He was the first Indian to receive this award after 125 years. The President of India honoured him with the prestigious ‘Tensing Norgay National Adventure Award” (2003) for Life Time achievements, the highest Adventure Award in India. He has also received the King Albert Gold Medal (Switzerland) and Joss Lynam Medal (Ireland). In 2017 he was awarded Piolets D’Or Asia 2017, UIAA. This is considered to be the Oscar award of mountaineering.