ON 13 February, we left Kathmandu by 3 taxis and 4 trucks for Trisuli-hazaar, from where we started marching along the Buri Gandaki Valley for Sama village. We reached Sama on 25 February.

On 3 March, all the members assembled at Base Camp (4,400 m.), and on 5 March we started to develop the route to Camp I, plowing through the deep snow by ourselves without the aid of Sherpas.

Camp I was established on the right side of the bottom of a steep snow gully on 7 March.

We began to climb to Camp II through the contact line of the snow gully and the rock ridge at the right of this gully. We used some rock pi ton and fixed rope which we had fixed during the reconnaissance climb of the previous year. In the middle of this gully we changed the route to the ridge from that contact line. We used 2,000 m. of fixed rope between Camp I and Camp II.

On 26 March, we set up Camp II on the east ridge of Manaslu and started to advance to the rock ridge.

At first we tried the traverse of the snow wall but it was very unstable. For five days we struggled in turns to develope our route, but we could advance only 120 m.

On 31 March, we all assembled at the Base Camp to discuss about changing to the route which the Japan Alpine Club party had succeeded in 1956. We decided to do just that.

From next day (1 April) was started to move to new the Base Camp at 4,350 m. under the Naike peak, and completed our movement on 9 April.

I devided our team into two parties; one took part in developing new camps on the JAC route and the other in moving the B.C.

We employed 37 local porters to carry up the baggage from the B.C. to Camp I and 7 porters from Camp I to Camp II, That afternoon the snow was getting soft, so it was hard for us to walk between B.C. and Camp I. We advanced to the Naike col and set up Camp II (5,900 m.) upon the Black Rock where we used 200 meters fixed rope. This was a safe place.

The route between Camp II and Camp III was most dangerous because of the ice avalanches from the North Peak. There in 1972, a Korean party was struck by a huge avalanche and 5 persons were killed.

From 29 April we began to open the route on the steep snow slope, called the "snow apron". We fixed the rope from the beginning to the end of this slope. At Camp IV the Sherpas and ourselves breathed oxygen at about flow rate of 0.5 liter a minute for sleeping. For climbing up to Camp V most of members used oxygen, but most of the Sherpas did not use it.

On 1 May, Ito decided a spot for Camp V at 7,650 m. on the snow slope, called the "plateau". The next day we were prepared for the first attacking system to the summit and three Sherpas carried the equipments up to the last camp.

Attack to the Summit:
On 3 May, Uchida, Mori, Nakaseko and Jambu (Sherpa) left the Camp IV at 10-00 a.m. and went up to Camp V with five Sherpas' support. The weather was fine in the morning but after about 2-00 p.m. the wind began to blow strongly.

The next morning we woke up at 4-30 a.m. The wind still beat violently against our tent. The first party (Uchida and

Jambu) left Camp at 8-30 a.m., and the second (Nakaseko and Mori) at 9-00 a.m. We carried two oxygen cylinders, some gear for bivouac and some food.

During the first two hours we walked on the steep slope. Later the route was not so severe so we walked at ease setting our crampon to work effectively.

We took our lunch looking up the false peak rather near the right side and there we laid the empty cylinder with a red flag as a signpost. At 3-00 p.m. Uchida and Jambu were out of sight. They seemed to turn to the left at the bottom of the false peak. At 3-30 p.m. we could look down the pinacle peak. We, the second party also reached the bottom of the snow wall, the right side of which sharply dropped down to the Marsyandi Valley. We could see Uchida take the lead in cutting the ice carefully about 100 meters before us. After they finished traversing this snow wall, they probably climbed the rock route directly. After a while we saw them stand on the top of this peak, take the flag in their hand and also take a photo. I wondered if it was a true summit. I shouted roudly "Is it the summit?". Uchida replied "No" by the sign of her hand. I and Mori deposited our sack on the same place as they deposited, then hurried to go up to them. When we reached their side, they burst out speaking to us at the same time. Jambu said "This is the true summit as that one" pointing at the forward peak, while Uchida insisted that the other one was the real summit. We, Japanese members, had many times seen that true peak in the photo which the Japanese party had taken 18 years ago.

I advanced. I was surprised to find a gap beween the true top and my stance. But soon I recalled the Japanese papers which had described this gap. I sought the route and went down to the right and then traversed to the left. There, on the short rock-tower of the summit of Manaslu, I found a rock piton and was comforted with this which had been hammerred 18 years long. I struck a new rock piton under the right side of the old one.

On 4 May at 5-30 p.m. we had reached the summit of Manaslu. "Well, well!! I stand on the summit." That was my first impression at that time.

The summit was like a small table, so all four persons could not stand on it at the same time. The remaining members of our team stood on the summit in this order: Jambu, Uchida, Mori.

The sky was blue and clean. We felt very lucky. I looked around and saw many peaks here and there over the cloud. Manaslu had sharp cut faces on its west and south side.

It took four and half hours from the departure from the bottom of the false peak to the return at the same place. During these hours no one except Mori used oxygen. Above all Jambu had not used it at all in this ascent, but he carried one cylinder for the members. Uchida and Jambu in advance went back to Camp V. Mori and I slowly went down in the moon-light. At last 10-00 p.m. we reach Camp V. The wind again blew violently. Accident: (-by Kuroishi.)

On 5 May, 3 Sherpas supporting the second attacking party left Camp IV for Camp V at 9-00 a.m. Suzuki started there at 9-30 a.m., while Ito could not start at the same time because her oxygen set was out of condition and started an hour later than Suzuki. The first summit party met Suzuki at the height of about 7,300 m. at 12-30 noon and talked with her. When she congratulated our success, her face seemed somewhat swollen. They asked how she was. She replied she was quite well. They advised her about the route to the summit.

The Sherpas starting in advance arrived at Camp V at 4-30 p.m. and soon went back to Camp IV. When they met Suzuki wearing red jacket at 7,550 m. on their way back, she walked very slowly but did not look tired. Then they met Ito walking about 100 m. lower than Suzuki.

When I (Kuroishi) corresponded with Camp V and Camp IV by transceiver at 6-00 and 7-30 p.m., I knew Suzuki and Ito reached neither Camp. I thought some accident might happen and gave instructions for both Camps to turn on light and whistle all night.

At 10-45 p.m. a Sherpa found Ito standing absent-mindedly near the Camp IV. She had alone come back from 7,550 in. not finding either Camp V or her partner Suzuki because of the blizzard.

On the next day, 6 May, we moved to search for Suzuki at dawn in such a violent wind that nobody could walk without securing each other. In these blizzard the search was very difficult and two Sherpas became frostbitten. On the way back to Camp IV, at the end of the fixed rope, at the upper end of the "snow apron", 3 Sherpas found Suzuki's ice-axe, cylinder and rucksack remaining open on her ice-axe and also some distance away, they found her red jacket with the safety-belt. She had probably

slipped down to the Manaslu glacier.

Thus she was missing. She was the most ardent member of ail and played the great role in this expedition. We pray that her soul rest in peace. 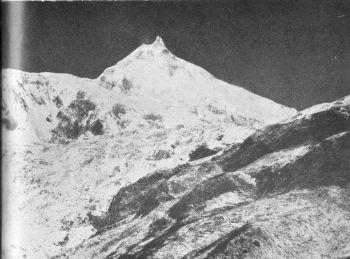 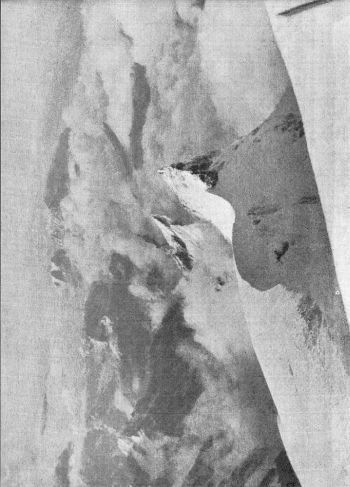 The Pinnacle, North Peak and Naike Peak from the false summit of Manaslu