AFTER the last few days of feverish preparations we finally leave on the 9 July. Our destination is the Afghan Hindu Kush, to be exact, the Wakhan corridor which wedges itself between Russia, Pakistan and China. In this region we intend to climb some peaks which, from our studies and the indications given by other Italian and Polish mountaineers, does not seem to have been scaled yet. The most prominent chain appears to be that of Kobe Wakhan, but the groups of Noshaq and Urgent also offer interesting possibilities.

We reach Kabul in 15 days instead of the estimated 12. Here we rejoin our geologist, Antonio Alberti who preceeded us by plane along with Silvano Sinigoi, graduate in geology, who will be in charge of the scientific part of the expedition.

At Kabul we hire a landrover into which we arrange all the equipment from the trailer and the small pullman and, finally, we leave for the mountains. It takes us another three days to reach Faizabad.

From Faizabad, after two days by truck and precisely near Urgunt we find the road to Qala Panja blocked. The flood in the course of its passage has broken all the bridges. We are already in Wakhan. To our left is Ab-i-Panja (Oxus), to our right the Hindu Kush from which descend tumultuous torrents of ice. We therefore turn back to Qai-Deh where the accessible valley to Noshaq begins and whqse northern wall we had thought of attempting had not received the entry permit into Wakhan.

At Qazi-Deh, where we pass the night, we get bad news of a different nature. We come to know of the presence of another expedition in the area from some well informed local people. Besides, the porters' daily wages are so exhorbitant that we have definitely to give up this idea. The next day we carry on with our journey to Qala Panja very early in the morning.

A Japanese expedition is coming in the opposite direction, whose members inform us on the conditions of the road to Qala Panja; broken bridge, water everywhere. They were forced to abandon the truck in which they were travelling in the midst of a torrent and have retreated upto Khardut, about 20 km. from us with a caravan of horses. Thus reaching Kohe Wakhan is a problem. We carry on, however, along the river Oxus hoping for good fortune.

A few kilometres later, we come across a Spanish expedition which attempted Kohe Shan, with a lot of misfortune. Indeed besides not reaching the peak, the leader of he expedition fell down a crevasse during the descent. The other members striken with grief were not able to find the body; probably dragged away by the water flowing deep down below.

We consult each other. It is the hour of decision. We can proceed to Qala Panja with the risk of being stranded in the middle of a ford with all the equipment or just remain here. We are only a few kilometres away from Urgunt Bala from where the Urgunt valley beings reaching a height of 6900 m. The Spaniards are good enough to give us a lot of information on the manner of approaching both the people of the place and the mountain. Thus we go to Urgunt Bala. It is the third of August.

Here the reception is good, even though the haggling with the porters is tedious. A settlement having been reached on the wages, we begin our approach along the Urgunt valley. As already mentioned it starts from this town at a height of 2850 m. and following a broad semi circle from north-west to south-west arrives upto the base of the wall. About 15 km. is half covered with moraine and the other half with ice. After a day and a half of marching at a height 4050 the porters leave us. We have come a little more than half the valley.

In a flat open space on the moraine we pitch the Base Camp; a tent for eight people and an improvised verandah which does the function of both a store room and a kitchen.

The next day we climb upto the top of the valley and at the base of the wall at a height of 4700 m., we find a beautiful spot to pitch two tents which will constitute Camp I. We take six days to provide it with provisions and materials. At the same time we study the mountain, trying to pick out the dangers and the patches of assault. The wall imposes itself from this point in all its majesty, 5000 m. broad and tapering off from the base to the peak at a height of 2300 m. completely covered with snow, it is formed of five peaks in a semi circle. It is limited on the east by the corner edge of Kobe Tez (7015 m. - climbed by the Polish) . Kohe Urgunt in the west (7038 m., Polish) with three peaks in the centre among which is ours. From the east; Shoghordok Zom (6838 m., Austrians), Shayoz Zom (6855 m., Austrians) and Kohe Shan (6920 m. - Wala 265 - unclimbed)[1]. The last peak has not been climbed by the previous expeditions probably because it is situated in the centre of long crest which renders its approach rather difficult. The route chosen by us follows a huge mass of ice which descends from the fork between Kohe Tez and Shoghordok Zom upto the eastern boundary of the wall. Undoubtedly, this route seems to us the most vital of the entire wall. It is also the safest, since the rest of the wall is impracticable due to the blocks of ice that fall incessantly during the day and often in the night.

We begin to climb this immense cascade of ice on 12 August. We are four in all, with a large tent, provisions and ropes to be attached to the wall. The first stage is a veritable labyrinth of crevasses which climb up a narrowing blocked transversally by fallen ice. There is no choice, to our left the Kohe Tez crest; to our right the wall is fortified by masses of ice of all shapes and sizes and which continually feed the fearful landslips and avalanches. We leave at three in the morning with headlights. The evening before, we brought our loads upto the edge of the moraine on the snow.

We want to be at the first ice block before sunrise, which however, is swifter than us. It is marvellous to see it burst forth from the corner of an ice, but it terrifies us. We have to hasten before those blessed ice start rolling down. We reach the block of ice at ten. We lower ourselves into a crevice about 40 m. broad and climb over to the other side along a considerable length of rope. We fix the passages with rope; still one more crevice with a capital G and above, out of the neck in a basin under the northern wall of Kohe Tez we pitch our Camp II at a height of 5600 m. The next day we descend to Camp I. We deserve a bit of rest. The other three will climb up to replenish the camp just set up.

The weather continues to be beautiful. We have acclimatised ourselves well and the fatigue of transportation is well balanced by our enthusiasm. On 15 August, the four of us decide to re- climb to Camp II. We depart before the break of day, carrying with us two bivouac tents. It is our intention to set up still one more camp as high possible and then decide on the spot what to do. After having spent the night at Camp II we proceed ahead. We find the tents left behind by the Spanish expedition, gives another block of ice a wide berth and before a hump below Kohe Tez we decide definitely for the fork between Shoghordok Zom and Shayoz Zom.

The slope increases sensibly and at about 200 metres from the hump we finally find quite a good spot to set up our two tents. We are at a height of about 6400 m. and to reach Camp III from Camp II we have taken about ten hours.

On 17 August the weather is bad. It has snowed the whole night, but we still want to explore. Reaching the fork between Shoghordok Zom and Shayoz Zom at a height of 6600 m. exhausts us a lot. It starts to snow again and mist has also settled. We wait a couple of hours for the sky to clear up to allow us to see the difficulties that await us and to decide on the best plant for the assault. Silvano Sinigoi is, however, not well. He was already coughing this morning. And now the persistence of the mist worsens his condition and lessens his chance of coming to Camp III. The other two also wait for some time, but then they too decide to descend. Silvano's condition persists during the night. He has difficulty with breathing and we are afraid of a serious illness. The next morning the weather is not bad but I return with Silvano. Walter and Luciano on the other hand will attempt the peak. I do not remember much of this descent, but I think I went through a nightmare; cold, heat and fear. It took us three hours to reach Camp I, and that too because our friends came half way thus freeing us of the loads.

Walter Romano and Luciano Corsi in the meanwhile, having left Camp III and having reached the fork on the first day itself were able to see the Kohe Shan Peak. But they realise that a crossing at this height in order to avoid climbing Shayoz Zom which is situated between this and the peak to be reached would be too risky. They therefore, decide to attack directly the obstacle climbing over the crest of Shayoz Zom. This forces them to overcome some pitches of 50°. Having come down the other side through a rocky ridge, they finally find themselves on the final ridge which leads to the summit. This does not present any more technical difficulties, but the peak is still far away and the height renders the assault very tiring. At 2 p.m. they finally reach the summit of Kohe Shan at a height of 6920 m.

Now they have to think of the return journey, which means climbing over the summit of Shayoz Zom again and for the third time this day they are at a height above 6900 m. With their last efforts they come down to Camp II which they finally reach in the middle of the night.

[1] Dr. DIemherger suggests the name Urgunt East because of the possible confusion with Shan or Shah and therefore with Shah Dhar.-Ed. 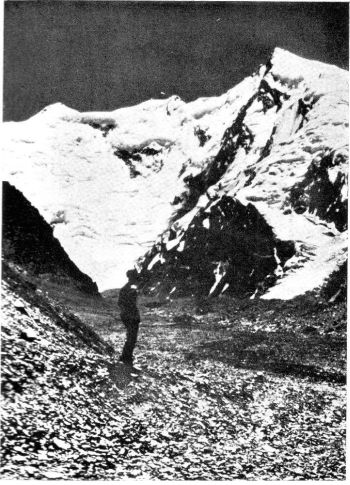