WE started from Pokhara on 14 March and reached Hinko Via Hyangia, Siukhet, Ghandrung, Kyumnu and Chomro on 19 March. We were a team of eleven, along with a liaison officer and seven Sherpas with 3,000 kgs of baggage.

From Hinko we followed the Modi Khola, bypassing all tributaries except that which led us to the south face of Ganga- purna. We passed the remains of the B.C. of the German expedition of 1965, then that of a Japanese ladies expedition and finally the 1971 Nagano expedition Base Camp. We established our own about a quarter of an hour's walk from here - on a fine day the view of Gangapurna, Annapurna III and Machha- puchhare were magnificent.

After an initial recce by Okano and Shibano we established Camp I at 4900 m. on 6 April, below a huge rock wall. The route from B.C. lays over a glacier largely denuded of snow, which made walking over loose moraine a tiresome task. After a kilometre of this we reached some flat ground and followed a stream to the left and crossed a ridge to enter the glacier proper and Camp I.

Camp II was established on 20 April at 5700 m. more or less at spot which the Germans had called "the balcony" from where the view was even more splendid.

Okano and Fujiwara forged a route up the slopes that lead to Annapurna III and had relatively easy work to establish Camp III at 6300 m. on 25 April. The site was just below the col between Annapurna III and Gangapurna. The opening of the route to the col was delayed somewhat by incidence of altitude sickness amongst the members and the refusal of the Sherpas to go higher than Camp III. We therefore gave up the idea of establishing Camp IV at the col (6,855 m.) and decided to launch the summit attempt from Camp III itself. The slope to the col comprised pure blue ice at 55° and required some fixed rope to ensure safety. The route was finally opened by Okano, Kikusawa and Fujiwara after which we all went down for rest and recuperation.

On 12 May, Okano, Kikusawa, Fujiwara and Shibano started from Camp II for Camp III. The following morning at 6 a.m. Kikusawa and Fujiwara started for the summit. They reached the col at 9 a.m. From here the ridge was wide and safe except for very soft snow and several crevasses. They reached the summit at 5 p.m. and stayed on the top for about an hour, by which time the weather began to break. They returned to col around 10-30 p.m. and were forced to bivouac for the night. They reached

Camp III at 1-30 p.m. on 14 May. The weather by this time was getting really bad - we were lucky to have made our bid just in time. We were lucky with our liaison officer who we feel was one of the finest in Nepal and we were grateful to our doctor, a cardiologist and besides being a mountaineer, a specialist in diseases of high altitude. Fie ran a regular check up with the portable e.c.g. machine, and advised us well regarding acclimatization. We reached Pokhara on 23 May and returned to Kathmandu the next day. 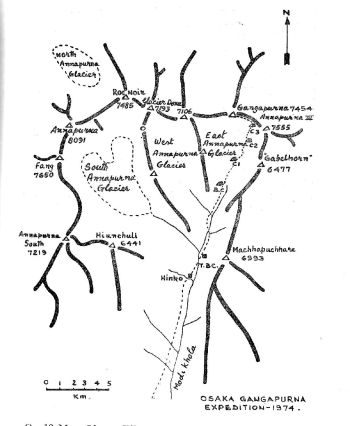 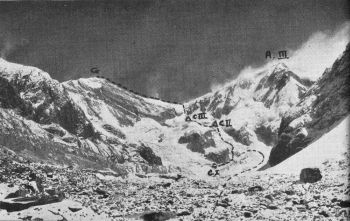 Gangapurna and Annapurna III from B.C. 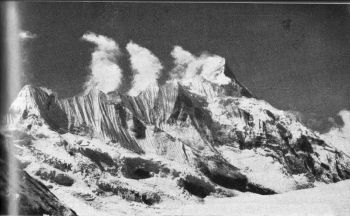 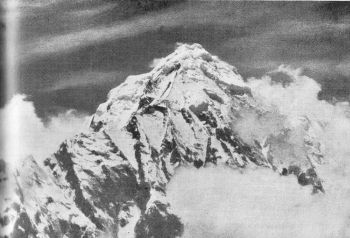 Hiunchuli from near Camp II.