AFTER the Manchester Nepal Expedition 1970 had returned to Delhi from its attempt on Nampa, Mr. R. M. Chakra- varty of the Indian Mountaineering Foundation had suggested that one day we should return to India to climb in the Himachal Pradesh. He suggested that we send our plans six months in advance so that the IMF could review our application. I did not forget this advice, for I had no intention of letting the Nampa adventure be my last in the Himalaya.

The first part of the plan which we evolved took us from Delhi by rail to Pathankot and thence by bus to Chamba, jeep to Brammhaur and on foot for four days to the Chobia pass. This area was intended to serve to acclimatise the party of six men and the Liaison Officer (Vinod Guglani) on peaks of 16,000 to 18,000 feet. A peak mentioned on the map as over 20,000 ft. also excited our interest, and we thought that if this appeared accessible from the Chobia pass area, we might confine ourselves to it and not venture further north. However, we did implement the second part of our plan, since the big Chobia pass peak was not really near the pass at all, and we preferred to taste the change of scene to the Miyar Nalla where lay other 20,000 feet peaks. This second part of our plan was to climb Phabrang, 20,250 ft., which was only two days' walk from the end of the road at Udaipur on the Chandra-Bhaga (Chenab) i iver. Having walked from Udaipur up the Miyar Nalla to Karpat, we met Sher Singh, who had been a porter on the Japanese expedition, which had made the first and only previous ascent of Phabrang in 1972. At first glance we preferred not to take this route which almost circumvented the mountain from north-west to south-east by way of a steep icefall. It forced us to commit ourselves at Base to a route of which we could see imilling. At first we seriously considered the Indo-British expedition's 1969 route, but this would have involved widely spaced camps and a last one almost on the summit. That we succeeded by the Japanese route was largely due to an adequate spell if good weather. One cannot help also feeling that the personal physical comfort, which we felt from 17,000 to 20,250 ft. as a result of our previous week of acclimatisation, contributed to our reaching the top without headache, nausea or other debility.

21 July found me slighting a British Airways VC10 in Delhi. Brian Cosby had been able to reach Delhi on 14 July in order to clear up last minute permit agreements and to arrange details for a liaison officer. Four of us took the train to Pathan- kot on 25 July arriving in Chamba late on the 26th. By the 26th the remaining two had joined us, along with the liaison officer and on the 30th the seven of us travelled by bus and jeep to Brammhaur. Twelve porters were hired and on 31 July we began the walk to the Chobia pass. Heavy rain all day during 4 August kept us in camp but on the 5th we reached a stony moraine bank at about 14,500 ft. and paid off the porters for the last time. We were at last among the peaks.

We spent the first day climbing a pleasant snow ridge to a lowly summit of 16,000 ft. or so and felt the beneficial effects of high mountain solitude. Our views were extensive and although cloud swirled around as we reached this summit, we felt at ease with the weather, which never became violent and vicious during our whole stay. Descent to camp was light-hearted and relaxed, and the evening views into the sunset from a west- facing camp began to make our expense of time, effort and money all seem worthwhile. We spent other days here attempting another peak (of about 18,500 ft.) from a s no whole at about 17,000 ft. The time came when three members of the party had to return to Delhi. Three of us remained with the liaison officer to continue over the Chobia pass and to put into operation the second part of the plan. The descent to Udaipur cost us much effort, but was rewarded with our first attempt at hookah smoking, fresh apricots and fresh vegetables. I was able to indulge my appetite for chappattis. After sleeping on snow for a week, we now lay on grass, and could wander less breathlessly in idyllic woodland among flowers and running rivulets.

At 9-00 a.m. on the 15th, we left with five porters for Karpat, nearly 18 km. along the Miyar. This valley was remarkably different from either of those which descended from the Chobia. A steep-sided gorge gave way to open fields and a high level of cultivation and community living. Along one section small shrines stood by the wayside amid the cornfields and alpine meadows. Thickly-fleeced sheep were being driven from high pastures, and cattle were tended by tiny urchins who wielded saplings with great determination. A resident was brewing at his still, and an old lady, pleading the infirmity of age, cajoled us to gather firewood, but ended by having collected and carried tar more herself than any of us men - the wiles of women were no different in India. The villagers seemed to be self-sufficient. The community seemed to have a well-being and independence into which we were intruding, perhaps even in some way trespassing. Vegetables were given to us, but eggs we had to buy. The people were not rich, but never showed that they might be dependent upon or subservient to us, whereas we did indeed depend upon them for porterage, food and simple hospitality. After a strenuous day of ascent from Karpat from 10,000 to 14,500 ft. we established our second Base Camp under the huge bulk of Phabrang on 16 August. The site was a flowery meadow, some distance from running water but with a panoramic aspect across to Menthosa (21,300 ft.) and other lesser satellite peaks. Next day we set up Advance Base and prosecuted the ice-fall which had piled itself up besides the Camp and seemed all the time ready to reassert itself into a different tumble of blocks, and perhaps while we were making ant's progress among the lower, disorganised jumble. But the night of the 17th was quiet, and cold, and the 18th saw us through and over the tottering seracs to view the final rock and snow/ice face on the wrong side of the mountain. Camp I was placed on a large open snow field with two tents overlooking a magnificent vista of peaks to the south and east across the Thirot Nallah.

As two ropes of two we set about an indefinite line up the side of Phabrang to a col which was indistinct from below but which had definite indentity once we had reached it. Weight had been cut down severely; we carried only one tent (a tunnel type) weighing 4 lbs. (2 kg), and only a small amount of food, in the hope that the weather would remain reasonable-in any case we did not have time in our schedule to stay long. The climbing was firstly upon loose rock and when the sun rose we found ourselves beneath a series of wide couloirs spread between rocky abutments. Occasionally, a boulder would be released somewhere high up and fire its fusillade of shrapnel fragments in wild an erratic aim, none of which hit us, but whirred past rather closely. The higher we climbed, the more tired we became, the hotter the sun, the drier the throat. Just after noon we reached the col, pitched the tent and made tea. Snow began to fall, and continued through the evening and night. Though cramped in our tent, we four rested well and even slept warmly.

By 3-30 a.m., the snow had stopped and stars began to twinkle. There was again no doubt that we had to get up - this was almost the last early rising and we must not waste the opportunity to use the best of the weather. At 4-45 a.m., I was irritably fumbling in the darkness and cold outside with bootlaces and crampons. Soon we had warmed up by the exercise necessary to climb along the snow corniced ridge. This was the day we had awaited, and it was truly perfectly for our ascent and return to Camp II. We all felt fit and could climb unhurriedly, thus having time to enjoy the experience. Our ascending ridge was superbly sunlit, views from it being in a circle of 360° around the Himalaya. The summit could be seen for about half an hour before we reached it, but in that time we were high above all neighbouring peaks. The final topmost point was a hummock of snow from which we gaped in amazement at the early morning view. The time was 7-10 a.m. and the most memorable comment was from Vinod Guglani, ''This is the first mountain I have ever climbed."

The realisation of our plans on this summit gave great satisfaction at the time and euphoria pervaded the party for days afterwards. That the team included the liaison officer to the summit had given cause for concern because of his inexperience, but Vinod was every bit a lover of the mountains and this endeared us to him. All his stumblings can be easily forgiven, for he had guided our paths in the earlier organisational maze of diplomacy, language difficulty and matters of local etiquette and courtesy. We had made a happy and united team which could blend in with the circumstances of mountain, community and weather. As I bade farewell to Vinod at Delhi airport, I remember hoping that less than four years would pass before my next visit to the Himalaya. 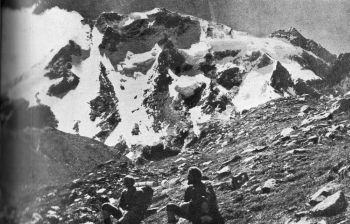 Phabrang; the route of ascent was from the opposite side through a steep icefall and over a rock and snow face.