A. BONICELLI AND N. CALEGARI

The mountaineering history of this wonderful mountain is fairly short and includes, in the space of 10 years, two attempts and the first ascent.

The first attempt in 1957, by the Anglo-Kenyan expedition led by Arthur Firmin, along the north slope was abandoned, due to an accident sustained by Firmin himself, who died during the journey to Pokhara. This was followed by a massive assault made in 1959 (after an exploration in 1958) on the north-east side by a Japanese expedition, led by J. Muraki. This attempt was as unlucky as the other because of a Sherpa's death at Camp II; it was made along the north-east slope, consisting of a fantastically steep 1000 metre ice wall.

A year later, in 1960, the Peak was reached by the long but easier south-west slope by another Japanese expedition of Keji University, led by Jiro Yamada.

From 1960 on, no other expedition (except for a small Dutch group who climbed Rani Peak[1] over Camp III of the 1959 expedition, in 1971) attacked this mountain, until our pre-monsoon attempt of 1974, which we decided to make along the same 1959 itinerary.

After a stay of about 15 days at Kathmandu to deal with a series of red tape and customs business and to prepare the porters' loads and the Sherpas' equipment, on 1 March we left in 2 lorries along the Kakani road for Trisuli Bazar, (63 Kms.). Here we waited for the porters and the next day started the trekking which should have taken us to Ngyak in 10 days without hitches. This was directly after the outlet of Chuling Khola into Buri Gandaki, stopping at Samri, Katunje, Hasla Pasal, Arughat, Yak- logar, Machakhola, Dobani, Jagat and Gatakhola.

Our Japanese and Dutch correspondents had advised us to attack the mountain from Chulin Khola and to avoid the long way round through Namru. After three days, however, we concluded that this way was not feasible: 1) because the B.C. could and be struck anywhere over 2800-3300 m.; 2) because the itinerary, traced by the Japanese from a photograph at the head of the valley was extremely dangerous and impossible to negotiate; 3) because the one followed by the Dutch to reach Rani Peak was too low and reached the lower plateau of Himal Chuli before Rani Peak and not after it, as we had hoped i.e. at the Japanese 1959 Camp II level. We therefore returned to Ngyak in another 2 days and, after a rest at Bih, we arrived at Namru on the 18 March, the seat of police sub-headquarters with the only radio in the valley communicating with Kathmandu. Through our zeaulous communications officer, we got the necessary agreements for communications and left a Pony radio with suitable batteries there. The next day we camped in Therang Khola at about 3800 m., on the snow limits and finally on the 20 March we reached a high alp in Shurang Khola, covered with snow, after having gone over a pass at about 4400 m. and there we set up the Base Camp (4200 m.).

For a week, as advised by the doctors, we stayed quietly at the Camp, taking care of its smallest details and planning the following days' activities.

On 28 March the first roped party went up the valley, keeping to the orographical left and reached col Lidanda, between Shurang Khola and the Lidanda glacier valley, and from there reas- cended the glacier on the left (West) for about a hundred metres, finding a suitable spot for Camp I, at about 5350 m. (four and a half hours).

In the following days the Camp was equipped and supplied: it consisted of a large depot tent (Urdukas) plus 4 tents for two (Whillian's Box and Himalayan Moretti).

On 2 April, a roped party, who had stayed at Camp I a couple of days to acclimatise, continued climbing the glacier for 3 hours towards the west, and although finding difficulty in getting over numerous crevasses, established Camp II at about 5850 m. on a narrow col between the Lidanda glacier valley and Chuling Khola in a perfectly beautiful spot panoramically, but rather buffetted by the wind and not altotogether safe because of the numerous small crevasses near and between the tents themselves. Once it was completely set up, Camp II counted 7 tents for two and a useful kitchen trench carved out of ice. Its radio easily communicated with Base Camp and Camp III.

On 7 April, after a long trek, about 8 km., the southern shoulder of Rani Peak was reached where, a few metres under the crest line, Camp III was erected (6600 m).

The way firstly wound up a steep glacier with a few crevasses for about 300 metres, then on the wide lower Himal Chuli plateau at the foot of the east face of Rani Peak, then a climb through the large chimney under the shoulder; the final crevasse was crossed by a thin little bridge of snow. We reinforced this natural bridge with some 4 m. poles so as to render it safe.

Camp III was made up of 4 tents for two and could communicate with Camps II, IV, V and VI. by radio. The reception with the high camps was often disturbed and the transmissions, made from the rest line, became dangerous in bad weather (lightning).

Under the shoulder of Rani Peak, after about 50 metres of slight descent, the way became very steep (vertical for short distances) and wound among crevasses. We fitted it with fixed ropes and with 80 m. of rope-ladders to reach the upper Hima-Chuli plateau where we mounted Camp IV on 19 April, at about 6250 m. height. We constructed an aerial ropeway 250 m. long- anchoring the two ends to crevasse edges. This always worked well and was of great help to us. Camp IV consisted of 5 tents for two and its radio communicated with the high camps and Camp III.

Above Camp IV, we continued up the narrow mountain passes and between the plateau crevasses and in 5 hours reached the evident snowy top which precipitates down onto the Lidanda glacier almost at the foot of the north-east face of Himal-Chuli and, on its western slope at 6850 m., we set up Camp V (27 April).

Notwithstanding the continuing bad weather and the almost non-existent help from the Sherpas, on 2 May, the evident band of ice-towers which are at the foot of face, was reached and on a small clearing above them at 7150 m. Camp VI was established.On 4th and 16 May, five men in two roped parties climbed the ice chimney, chosen as the ascent route (the same as that of the Japanese, but resting a bit further to the north alternating leadership and fitting the way with fixed ropes for 200 and 100 metres respectively. The gradient was 60° or more and the ice was extremely hard. Thus 7450 m. were reached: 50 metres below a rope fixed to a nail was found, marking the highest point reached by the Japanese in 1959.

On the morning of 8 June, while a rope of three men was at the end of the fixed ropes at 7450 m. and was about to attack the upper wall of the chimney, Mario Dotti slipped on the edge of a small crevasse near Gamp VI and, after a fall of 50 m., flying to the foot of the ice-towers, he precipitated onto the steep glacier continuing to slide like a rocket for another 300 m. nearly down to Camp V. The three on the face went down to help him and his condition seemed critical. With the aid of two Sherpas he was carried on a stretcher to Camp IV where he began to recover from the bad state of shock he was in, also thanks to the effect of the treatment immediately given to him.

However, because of its being necessary to help with his transportation and the exhaustion of combustible gas (propane and butane), we decided to break off the climb.

The sick man made continuous progress and, with everybody's help, was back at Base Camp on 11 May. On 12 May, the gas reserves finished. Its premature exhaustion, that could have had serious consequences, was due above all to the wastage on the part of the Sherpas unknown to us and especially at Base Camp (a partial justification for such wastage lies in the fact that the greater part of them were ill and in part to the useless exploration in Chuling Khola added to it, together with the continual leackages from the stoves damaged during transportation).

On the 18 May, we left Base Camp and, passing through Aru- ghat, Khanchok and Dorondi Khola, we reached the Kathmandu road at Kaerini - Pokhara. On 27 May, we were at Kathmandu again.

Mr. Madan Jung Sijapati was a liaison officer to whom we are very grateful for his zealous collaboration. 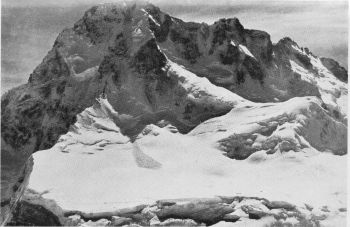