With entry to the Parbati valley guarded by a police check- post, the only hope of approaching Point 20,101 ft. was the Sainj Nal to the south. The pundits in Manali could tells us nothing about it; nobody had been there and the tendency was to dismiss it as impracticable. We were in a quandary until enquiry at the government map office in Delhi revealed, to our amazement, that we could actually buy a quarter-inch map of the area - based on the survey of 1917, but a map nonetheless. The Sainj Nal, according to our new information, contained several small settlements, and at the very foot of the glaciers falling from Point 20,101 ft. was a grazing ground known as Rakti Tapta. It could not be totally inaccessible. Admittedly, there was still a question mark over the foot-path, the line of red dots mysteriously coming to an abrupt end a few miles up the Nal, only reappearing ten miles later at the village of Marawr. There was no way of telling whether this implied an impassable gorge or a surveyor's error. However, from the village of Gosheini (Bandal on the map) at 6,000 ft. in the parallel valley to the south, another path was shown running over a 13,000 ft. ridge and down to Marawr, 8,000 ft. We decided to take this path rather than risk the Sainj route.

Though a magnificent high-level walk, this was a mistake. A path does, in fact, run all the way up the Sainj Nal, and our route not only took three days instead of two, but left us porter- less at Marawr, where the male population seemed to be rather less than two men and a boy. The porters from Gosheini refused to go any further up a strange valley. From there on we were our own porters and it took six days of ferrying loads up to 80 lbs. before a Base Camp could be established at 13,500 ft. on the grassy floor of a wide moraine valley.

The mountain was still not visible, being obscured by a huge icefall. The only safe route appeared to be on its right-hand side (true left), but when we attempted to carry loads up it, we discovered that falling stones made even this way far from safe. Climbed at night it would have been feasible, but as a regular route to and from Base Camp it was too hazardous. From a height of 15,500 ft., after a day of sustained and, at times, technical ice-climbing, we turned back.

The mountain could not be climbed from the Sainj side, so it would have to be the Parbati side after all. From Base Camp we could see a peak we identified as Ainger's Snow Peak. The 17,000 ft. col to its west looked easy to approach and we knew that Ainger had found it straightforward from the north. Arbitrarily deciding that rations designed to feed two men for five days could really feed four men for the same period, we compressed food and fuel for ten days, as well as climbing gear, into 65 lb. loads and in two days crossed over to the Parbati, or north, side of the watershed.

Advanced Base was on a moraine at the junction of the two arms of Ainger's Glacier IV and near the site of his Camp I-we even found his cache of sausages which some, though not all, of us enjoyed. From there we could attempt not only Point 20,101 ft. but also a cirque of peaks overlooking a high snow bowl at the head of the southern arm of Glacier IV.

For the sake of simplicity, we have retained Ainger's height- ings (Ridge Peak 19,000 ft., Snow Peak 18,500 ft., Advanced Base 16,300 ft.) and used them as terms of reference for our own approximate heigh tings, even though we suspect them to be overestimates.

Route lengths refer to vertical height rather than rope lengths,

The alpine nature of all the routes makes the use of alpine gradings an appropriate means of indicating the difficulties. We have tried to be as objective as possible, bearing in mind that at 19,000 ft. a pitch of, say, IV feels much more like V. As far as we know, all the climbs were first ascents.

For two-thirds of its height a typical alpine ice-face, 50° at the top and capped by a cornice. Then steeper (60°) slopes of excellent frozen snow and a rock pinnacle for a summit. Descent down a rock riclge and ice slopes on the south side of the mountain.

An ice-couloir on the right of the face (climbed at night) was followed for 500 ft. before a traverse could be made onto the face. From there until the summit ridge, the climb was almost entirely on rock of varying types and quality, giving many enjoyable pitches but, surprisingly, nothing harder than IV, though route-finding was complicated in places. Some stonefall. Bivouac near the crest of the east ridge and three rope-lengths below the summit ridge. Eleven abseils needed on the descent, keeping well clear of the couloir which is a death-trap by day.

Though short, a fine mixed climb with III and IV difficulties on rock. Descent down the south ridge. Climbed from Advanced Base, making a very long day, since a route had first to be found through an ice-fall and into the snow bowl.

An unpremediated evening climb from a bivvi camp in the snow bowl, unroped and by different lines, reaching the summit as night fell.

An impressive-looking aiguille that gave a disappointing climb.

We were blessed with near perfect weather and climbing conditions. After an initial two days of mist and drizzle at the beginning of September, the weather settled into a dependable pattern - clear skies in the morning, clouding over and sometimes showering in the afternoon, clearing up again in the evening. Only once was this pattern broken by bad weather and that happened to be a rest day.

We had expected the monsoon to leave behind a residue of soft snow, but in fact there was none. Even at 20,000 ft. precipitation must fall as rain, or if as snow, it melts immediately. The south face of Point 20,101 ft., a mixed face in Ainger's pre-monsoon photos, was pure rock. Glaciers had been stripped bare and crevasses were obvious, making approaches easy. Disadvantages were the sheets of bare ice in couloirs and on snow slopes and the increased danger from stonefall. Only towards the end of September did temperatures drop and the afternoon showers became heavier, so that fresh snow was lingering on the tops.

The south west ridge of Point 20,101 ft. is a superb rock climb and awaits an ascent. Rob and Geoff attempted it, but after a day's sustained climbing at IV and sometimes V, they were still on the "easy" section, well below the prominent halfway terrace. As they were carrying only two days' food, prudence dictated retreat. There is little doubt that the route would go, however. The crux would almost certainly be the step just above the terrace which is extremely steep but split by a promising chimney-line.

Pyramid Peak, 19,800 ft., remains unclimbed, but from Glacier IV its complicated rock face is a confused jumble, with several possible routes none of which constitute an obvious or attractive line.

Glacier III would have much to offer a strong party. Point 20,101 ft. and Pyramid Peak both present huge mixed faces on this (north) side and Peak A (which Ainger gives at 19,700 ft. but which was quite definitely higher than us as we stood on the summit of Point 20,101 ft.) a series of impressively steep and compact rockwalls with no easy way up.

Once on the Parbati side of the watershed we could not resist travelling through new country. So, having fetched the remainder of the gear and some more food from Base Camp in the Sainj Nal, we walked out down the Parbati valley, a beautiful walk marred by heavy loads. 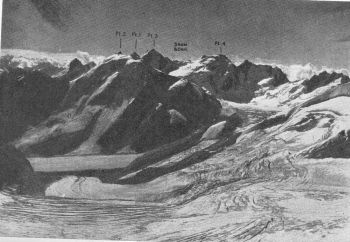 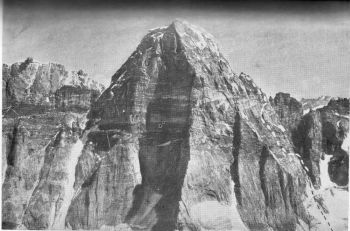