THE FIRST ASCENT OF KANGBACHEN, 1974

The Polish Expedition To The Nepal Himalaya

The first party comprising A. Gardas, M. Malatynski, K. Olech, J. Olszewski, M. Rogalski, A. Sobolewski with Jepa, Sonam and 12 porters came to the Ramtang Valley on 16 April, and established the Base Camp at the same place where the Jugoslav expedition had in 1965.

We started to work preparing Base for the main caravan group, doing the reconnaissance of the npper part of the valley and observing the icefall and moraine through which the Jugoslavs got to the first terrace of Kangbachen.

The icefall, formed at two levels was very fractured and the snow covering it's surface made difficult the early observation of crevasses. The sides of the icefall were threatened by avalanches, that eventually could be caused by the seraes from the first terrace. The lateral moraine had another hazard, a stone- fall coming down regularly after 10 a.m. everyday and causing avalanches of different sizes. As a result of the recce we decided on a safe route through the middle of the icefall, it being a relatively quiet part between the seracs and the snowfields so we supposed.

On 20 April, we pitched the first temporary tent high on the embankment of the first terrace (5750 m.). Two days later we found a route through the moraine which was threatened less by stone-avalanches than the one used by the Jugoslavs. Camp I was established on 28 April at 5400 m. in the icefall but was mainly for use when transporting the loads. Camp II (5850 m.) was a third of the way up the first terrace. On 6 May, we were already in a temporary tent at 6200 m., under a steep face leading to the apparent saddle between the first terrace and the Jannu Valley. This exposed pitch was safeguarded with fixed ropes. Our work was done in continuous snowfall and wind blowing regularly before the noon. Early in the morning of 11 May, I left the tent (at 6200 m.) with A. Sobolewski for the Base Camp. We went down quickly - 1 hour to Camp II, 1J hours to Camp I and by 9-30 a.m. we were already in Base Camp. The route through the icefall no more existed! Fixed ropes and markers were under ice debris - there must have been a tremendous movement of ice blocks.

We met all in Base Camp. Here we decided to build a new route to the first terrace through the upper part of the lateral moraine where we observed rather less falling stones now than 3 weeks eardier. On 12 May, we went up with loads. The Sherpas broke up Camp I and brought its equipment to Camp II. From this date there was no Camp I but we continued to retain the previous numeration. We established Camp III (6350 m.) on the saddle.

On 14 May, while the group of W. Branski established Camp III, we left the Base Camp together with J. Olszewski and went to Camp II. The route via moraine was logically marked with the decorated stone-cairns by S. Wdowiak and Sherpa Wangchuck who showed a considerable artistic abilities in doing that work. The group of P. Mlotecki came down the same day to Base Camp. All other team-members were there except the Sirdar who had gone to Ghunza.

Next day we reached Camp III and returned for the night to the tent under the saddle, where the wind was not so piercing. On 16 May, a strong wind made the effective action very difficult The group of W. Branski move a bit ahead over the saddle, then descended to Base, after fixing ropes. Next day we fixed these ropes for continuous use, made them longer by about another 100 m. and turned back for the night to Camp III.

18 and 19 May were very windy days. We didn't waste time and put some fixed ropes higher up on the ice slope separating us from the Jannu Valley. There we reached the Japanese fixed rope of the previous year, hanging in perfect state. Over the face we found the destroyed tents of old Japanese Camp (6550 m.). We repaired one of the tents and spent the night there after having cooked the meal on Japanese gas and completed our dinner with the left over tins. Particularly the crab was excellent as a supplement to our Polish food! 21 May was a day of fine weather. We now divided ourselves into 3 parties. W. Branski and I safeguarded the steep parts of the spur leading up to the second terrace. We reached it ultimately on 22 May, when W. Klaput, M. Malatynski and Z. Rubinowski put the fixed ropes on the last pitch of the route and established Camp IV (6800 m.) there. The Sherpas went down to Camp II for the food. In the evening we were in touch by radiotelephones with the Base Camp. They told us of coming monsoon before the end of May. The experienced Sherpas in our party appreciated soon that our time was short. Furthermore we were informed by Base that the Japanese expedition had successfully climbed Jannu and another Japanese team had given up the attempt only 200 m. from the summit of Yalung Khang. We now decided on an ascent using alpine tactics. We started the action towards the summit on 23 May. Our challenge was the time remaining before the monsoon. There were given only the orders from the Base Camp, to push up more food to Camp IV and the Sherpas to bring the oxygen equipment. We took into account its eventual use in case of need for medical help only.

After having slept well we left the Camp IV at about 7-30 a.m. on three ropes: W. Branski and Z. Rubinowski; W. Klaput and M. Malatynski and J. Olszewski with me. The wind was mild but there was much of deep, inconvenient snow. We traversed the terrace diagnoly upwards to reach the rocks on the edge of the big plateau. Beneath them the danger of avalanches was decreased. The route there was much safer but technically more difficult. We crossed the ribs and spurs built of snow and rock, steep snowfields where we had to use ice-screws for belay. About 5 p.m. we began to prepare Bivouac I. On an exposed rib (7100 m.) we hardly made two show platforms for the tents. We slept secured, having put the ropes through the tent's wall and clipping onto them with karabiners. The same day the Sherpas descended to the saddle and P. Mlotecki, A. Pietraszek, M. Rogalski left the Base for Camp II.

On 24 May, we moved late, at about noon. The weather conditions and the climb were very similar as the day before. We went till 4 p.m. only and began to arrange for Bivouac II (7300 m.) again on the unconvenient snow and rock rib. On 25 May, we awoke early in the morning and were readily to go further by 9 a.m. First followed a steep descent into a couloir, and than we climbed in it upwards in deep snow. Finally at about 4 p.m. we reached the big stone blocks (7450 m.). Under their overhangs we prepared the comfortable platforms for the last Bivouac III. Here we put again the securing rope and slept. We left the tents on 26 May about 7-30 a.m. J. Olszewski, who was feeling weak remained in the tent, belayed by the fixed rope. We walked about 200 m. steeply up the mountain, against a strong wind blowing. We reached the flat part at the end of the couloir over the rocks and discovered with astonishment that instead of a pass, a vast ice-plateau stretched there. Several meters to the left rose the rock and ice ridge of Kangbachen, and far ahead appeared the ridge of Yalung Ehang. The main summit of Kangchenjunga was invisible. At first the ridge was not difficult. Before the presumed summit of Kangbachen was a rock-tower, that we by-passed by abseiling and then climbing up. Behind the tower was again a group of small rocks and two snowy elevations of the summit. I took one small rock as a souvenier. It was difficult to judge which elevation was higher. We climbed both of them. It was approximately 11-20 a.m. The wind was not strong nor was it very cold; however the film when loaded into my camera broke.

Wojtek Branski measured the temperature of snow, it was-13°C. Beneath us the clouds and fog was veiling more and more of the panorama. We started to go down at 1 p.m. Passing by the small rocks we left a note of our ascent.

At 2-45 p.m. we were already back at our third bivouac under the big stone-blocks.

We moved down from Bivouac III on 27 May at 9 a.m. We were in continuous touch with Z. Staszyszyn at Base Camp, guiding us to a meeting with P. Mlotecki and A. Pietraszek. When joined all together we bivouacked that evening in a crevasse. Next day we reached the tents of Camp IV about 4 p.m. Finally we reached the Base Camp on 30 May at about 6 p.m.

We reached Ghunza within 2 days with a night's rest opposite Kangbachen village. At Ghunza the expedition stayed 3 days to celebrate with the porters our success. 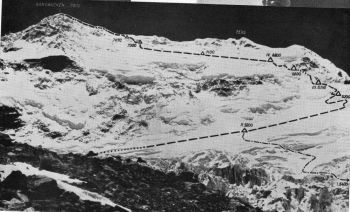 (Photo: Z. Rubinowski) NW face of Kangbachen. Dot-Dash line indicates route via the icefall, used only during the early stages.