[In 1971 a team of twelve members had explored the route to this mountain alo?2g the long and difficult north ridge. The expedition was led by K. M. Herrligkoffer and comprised Michel Anderl (climbing leader), W. Bitterling, L. Glasl, W. Herrman, Alice von Hobe, D. Jankowiak, G. Mandl, H. Reiter, P. Scholz, W. Shwarzbauer and }. Vogt. That year success was snatched by illness at a crucial time during the assault - particularly unfortunate because the weather was excellent. They had established Camp III on 21 September before giving up the attempt - Ed.]

By August the B.C. has been established. Other team members are already busy preparing a route for Camp I, with steel ropes. The weather is extraordinary this year. In the Indian sub-continent the monsoon is on. But does not proceed beyond Nanga Parbat, and thus does not reach the northern parts of the Karakoram. It is warm - at night we sometimes have a plus 5 degree temperature of 4000 m. At Camp II, which is at 5300 m. we once have rain. Thus the ascent to Camp I which one reaches over a rockwall has dangers of stonefalls. We have experience rock and stonefalls. Bayer writes: 'At 9 a.m. I started again with the porters. In half an hour we were at the moraine where we put on our crampons and were just reaching the first steel rope, when we heard someone from above calling out to us. On the aluminium ladder stood Amadeus who shouted that we should please definitely remain where we were. Then Hermann and Mandl came to us with three porters. I was so taken aback and thought that the wrorst had happened. Amadeus told us that early morning a rock crashed on to Camp I; the Camp that appeared so secure. The porter-tent, in which three porters were asleep was destroyed due to a stonefalL By the grace of God, the porters were lying so flat that, the stones rolled over their heads and out of the tent again, and no one was harmed.

Thus we found it advisable to use Camp I only as a storage tent and that we should not be in the tent any longer than absolutely necessary. We counted on frost setting in soon and thus improving conditions.

The climbing problems are far more immense than that we experienced at the Rupal flank of the Nanga Parbat; Rakaposhi is not as well known as the Nanga Parbat, but its ascent over the north ridge can be counted as amongst the most difficult problems in the Karakoram.

At the beginning of September Camp II had been properly established. It serves as the acclimatizing for the team which has already made advances towards Camp III. Eight members have been selected for the summit assault. Porters are only used up to Camp II. Between Camps II and III which is already situated on the north ridge, we meet great difficulties from a rock ridge, which contrary to 1971 has no snow. We require fully two weeks to prepare this route. Then at last we reach the highest point we had reached in 1971. At that time it was P. Scholz, who died on Mt. Blanc, who had reached the highest point here.

Thanks to Heiss, Henke, Klimek and Mandl we reach the north ridge at 6500 m. inspite of all this time loss. Camp IV lies at the lower base of this difficult ascent. Now the ground appears easier and gives us much hope for the summit assault.

Since it was already end September, we have to decide, whether to spend another two weeks here for an assault or to return. Could we have been assured that the weather would hold, than we all would have been prepared to take the risk and would have been assured of success. The weather-god made the decision for us. We experienced a prolonged bad weather period, which made me decide to abandon our attempt. For another attempt we would have had to wait for the bad weather to pass, and wait another three days for the snow to become firm. We would surely have required another three weeks for this, and none of the team members had the time to be so long away from home.

Besides valuable scientific results, we reached this time a height of 6500 m. and have investigated extensively the north ridge and solved some problems for the direct assault. We do hope that next year we shall be able to come again with an equally competent team, then we would take advantage of all the things solved by this present team. Every piton, every fixed rope and every rope ladder wrould help towards a quicker ascent. 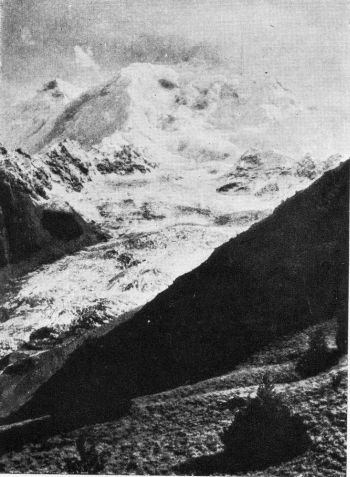 Rakaposhi: The North ridge is at left of centre