SHISHAPANGMA (26,398 ft) lies 100 miles WNW of Everest to the north of Nepal and wholly in Tibet. The Tibetan name means 'The Crest above the Grassy Plain'. The Sanskrit name is Gosainthan which means the home of the Gods. Its height is 8013 m although recently the Survey of India gave 8046 m which, if this figure is assented, makes Shishapangma the world's thirteenth highest peak. It had been climbed before. The first ascent was made in 1964 by the Chinese who had 195 members working on the north side. In 1980 the Germans taking prompt advantage of the opening of Tibet to foreigners repeated the Chinese route in May, as did the German Naturfreunde expedition during September. They did a variation taking a line further east from 23,075 ft to the summit. During 1981 the Women's Climbing Club of Japan repeated the Chinese route, as did the Austrian-German (Messner) expedition - also in the pre-monsoon season. An American expedition failed in the autumn also from the north. The vast south side and the Nyanang Phu glacier and Phu Chu valley had never been visited, except by local yak men part way. Thus the southwest face - the main objective of the expedition - was unknown, except from photographs taken from the air and from peaks in Nepal some 15 miles away. All the other great Himalayan south faces of the fourteen 8000 m peaks had been climbed. We hoped to climb this one without a reconnaissance and in alpine style.

Permission
Nick Prescott was the first member of our team to seek permission for Shishapangma. He wrote to the Chinese Mountaineering Association in the summer of 1979 and was 'invited to apply' Easter 1980, and received permission in the summer. It was thought at the time that only national expeditions with political help could secure permission for Tibet. Nick, who had not been to the Himalaya before, proved them wrong. His original team backed out and he handed the expedition over to me during March 1981, although Nick continued to do nearly all the difficult administrative work, and very thoroughly. Eventually the following thought they could afford to go.


The Team
Roger Baxter-Jones, Alex Maclntyre, Elaine Brook, Paul Braith-waite as well as Nick and myself. Elaine and Nick would climb during the acclimatization period and then Elaine would try to make contact with local Tibetans and Nick would be in support of the rest of us on Shishapangma south face.

Finance
Nick and myself raised half each of the £25,000 that this expedition eventually cost, with my father handling the difficult job of selling 5000 expedition postcards. The reason climbing in China is about five times as expensive as climbing a comparable peak in Nepal is tied in with China's need for foreign currency. Compulsory hotel accommodation in Lhasa, for instance, costs each person about £90 and transport by lorry from Lhasa 500 miles to the road head cost over one thousand pounds. Consequently we travelled light and declined to have an expedition cook and mail runners. All in all this was a very spartan trip.

Organization
Alan Rouse, who was out with the British Kongur Expedition, negotiated with the C.M.A. in Beijing, thus saving us the cost of going out there ourselves. Working with Nick he arranged schedules, food purchasing and the budget, part of which would have to be paid before leaving Britain and the rest before we left Beijing.

We received unstinted help from John Everard at the British Embassy in Beijing who took over where Alan left off. Dr Li and Wu Ming at the C.M.A. were always as helpful as possible and we are grateful to them.

Travel Events
Arrived Beijing on 4 April - arranged onward schedule with CM.A. Wu, our interpreter, joined the expedition. Flew to Chengdu on 8 April. Flew to Lhasa on 9. Here we were joined by our liaison officer Pemba. Long discussions with C.M.A. (Lhasa) over transport and schedules. Borrowed tents from Thomas Cook's cache. Visited the amazing old town of Lhasa and the Jokhang temple, cathedral of Lhasa. 10th travelled by lorry to the road head at Nyalam, arriving on 14th after visiting Shigatse and Shekar (14,619 ft). Enjoyed our drive across the vast Tibetan Plateau. Saw ruined monasteries dynamited by Red Guards during Cultural Revolution.

We established base camp (16,450 ft) by a small frozen lake en 24 April about 18 miles from Nyalam and above the lower end of the Nyanang glacier. We set up advanced base camp on 3 May just south of the unclimbed peak of Nyanang Ri (23,200 ft).

Acclimatization Period 4 May - 25 May

South ridge of Nyanang Ri. Paul was ill with an old chest complaint and remained in camp with Nick, who was suffering from diarrhoea and poor acclimatization. From 4 to 7 May we climbed up the south ridge and across leftwards on ice and snow below the summit and northeast ridge. We did not go to the top. We had three bivouacs. Elaine got to 19,000 ft and retired as she was unable to acclimatize in the short period available. Paul sadly left for home on 13 May rather than risk permanent injury, and Elaine left for Lhasa on 15 May and had many adventures and stayed with various Tibetan families en route.

Pungpa Ri (24,425 ft) First Ascent
This peak is really the SW shoulder of Shishapangma about one mile away and separated from its parent summit by a saddle at 24,000 ft.

Roger, Alex and myself set off from Castle Camp, a camp the four of us established at 19,000 ft and approximately 3 miles NW of advanced base, at 10.30 a.m. on 17 May climbing a couloir (45°) to a bivouac below a col at 22,000 ft. Next day we climbed the south ridge (IV) to a bivouac 500 ft below the summit with a strong wind blowing. On 19 May we went to the summit and descended by the same route to Castle Camp at 8.00 p.m. - a very long day. We had now completed our acclimatization and knew of at least one way down from Shishapangma, although so far we had not seen the way up in detail. Whilst the party were on this route Nick made a reconnaissance of a minor peak at the southern end of the Shishapangma ridge, which he subsequently climbed part way up.

Shishapangma Southwest Face
On 25 May Alex, Roger, Nick and myself left Castle Camp and traversed for two miles across glaciers and under dangerous seracs to the base of the southwest face. We then climbed on easy snow and rocks 1000 ft to find a perfect bivouac site in a little rock basin on a buttress jutting out from the face. Nick went down from here to remain at Castle Camp in support. On the 26th we climbed mostly unroped taking a line that slopes up right to left to just southeast of the summit. Alex and Roger took a line up ice and snow 50° and I went up a rock rib before the three of us joined to climb roped up the last 150,0 ft (some grade V sections) of mixed ground to bivouac at 23,000 ft in the obvious 'pea pod' snow couloir. On the 27th we climbed up this unroped to bivouac at 25,000 ft. We continued unroped up the couloir on the 28th to the southeast ridge and along it to the summit at 2.00 p.m. We went to the higher east summit that may or may not have been visited before. It is about 30 ft higher than the west summit 300 yards away. That afternoon we descended down the SE ridge to bivouac on it at 24,900 ft. On 29 May we descended further to the saddle at 24,000 ft and then after descending 400 ft roped, we went down snow-ice (55° - 45°) unroped to the glacier and round to Castle Camp at 7.00 p.m.

Although the climb had been somewhat easier than expected and not as long - about 8500 vertical feet - it proved to be one of the most satisfying we had done previously in the Himalaya - a classic line up varied terrain on a major face, isolated and unexplored.

Departure
We left base camp on 2 June after languishing in the euphoria of rest after great effort. We left Nyalam by lorry on 3 June and flew into Beijing on 8 and left on the 11th after heavy negotiations regarding our budget. We arrived home in Britain on 12 June. 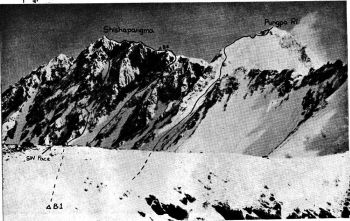 Shishapangma and Pungpa Ri in Tibet (China). The routes of the British expedition 1982. (Photo: Doug Scott)