GEOLOGICAL NOTES ON THE GASHERBRUMS RIDGE IN THE KARAKORAM RANGE

The Gasherbrum ridge rises between the Upper Baltoro glacier and his tributary the Abruzzi glacier to the south, and the North Gasherbrum and Urdok glaciers with some of their tributaries (Nakpo and Span glaciers) to the north. The first ones belong to the Indus drainage basin, the second ones to the Yarkand basin.

The ridge extends from the Falchan la in the north, to the Urdok la in the south, for a length of about 18 km. 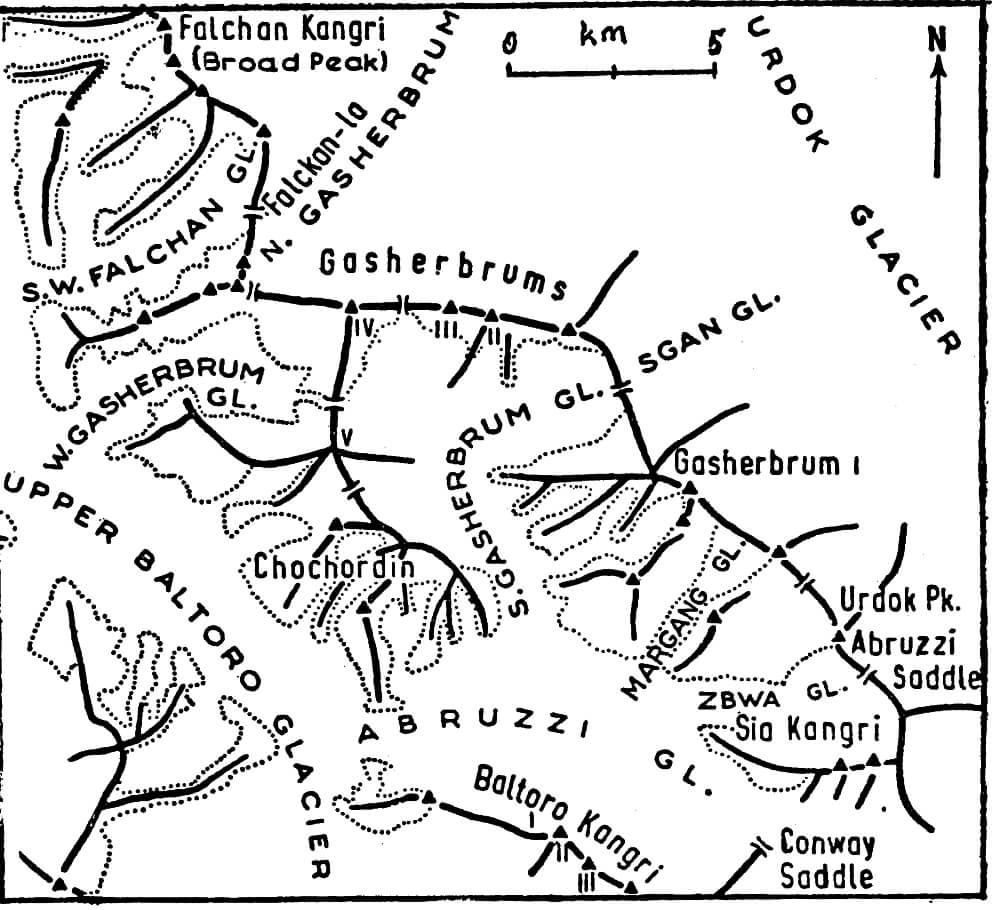 Our knowledge on the geology of the Gasherbrums, besides the direct observation of the mountains, are deduced chiefly from the nature of the morainic blocks transported by the glaciers flowing down from the southern and northern slopes of the ridge. They are the West and South Gasherbrum glaciers, and the Margang and the Zbwa glaciers in the southern side, and the North Gasherbrum, East Nakpo, $gan and upper Urdok glaciers in the northern side.

The west wall of Gasherbrum IV rising on the background of the West Gasherbrum glacier, is visibly cut by a* vertical plane (fault?) marking the contact of two very different rocks, a dark one to the north, and a light one to the south. The first one is a quartz diorite, numerous samples of which may be collected in the central moraine of the South Falchan glacier and in the right-hand moraine of the West Gasherbrum glacier, while the second one is a limestone. (Fig. 2)

In the right-hand moraine white limestone fragments predominate, associated with white marbles, grey and blackish foliated limestone, black slate and chloritic schists interbedded with limestone, diorite and 'baltorite'. All these rocks come from the spur which separates the South Falchan glacier from the West Gasherbrum glacier. Some hematite blocks are also present among the materials composing this moraine. From the right side of the moraine towards its centre the quartz diorite fragments become more and more frequent until, at the centre, they are far more prevalent than the other rock types, of which various limestone types are most frequent. Crossing towards the left side, the limestones become more and more numerous until they exceed the other rock types.

The origin of the above listed rocks is relatively easy to identify. White marble and limestone come mostly from the northeast slope of the peak at 5983 m. The sericitic and chloritic schists with interbedded limestone are visible in the narrow gap of the west spur of Gasherbrum IV, below the peak at 6218 m.

The schist outcrop within the gap is limited by a fault which, to the east, eliminates the formation. The numerous blocks of quartz diorite come from the large outcrop of this rock composing the west spur of Gasherbrum IV, culminating on the peak 6925 m high.

The limestones found in the left-hand moraines of the West Gasherbrum glacier confirm that the whole eastern slope of the basin is composed of these rocks; but there are different types of limestone and it is difficult to distinguish the source of each. The Gasherbrum IV is probably composed of light-coloured, thick-bedded Triassic limestone (Aghil Limestone), and the Gasherbrum V and its west spur of grey and yellowish limestone of the Shaksgam Formation (Permian and Upper Carboniferous), and containing minor interbedded dark slates. 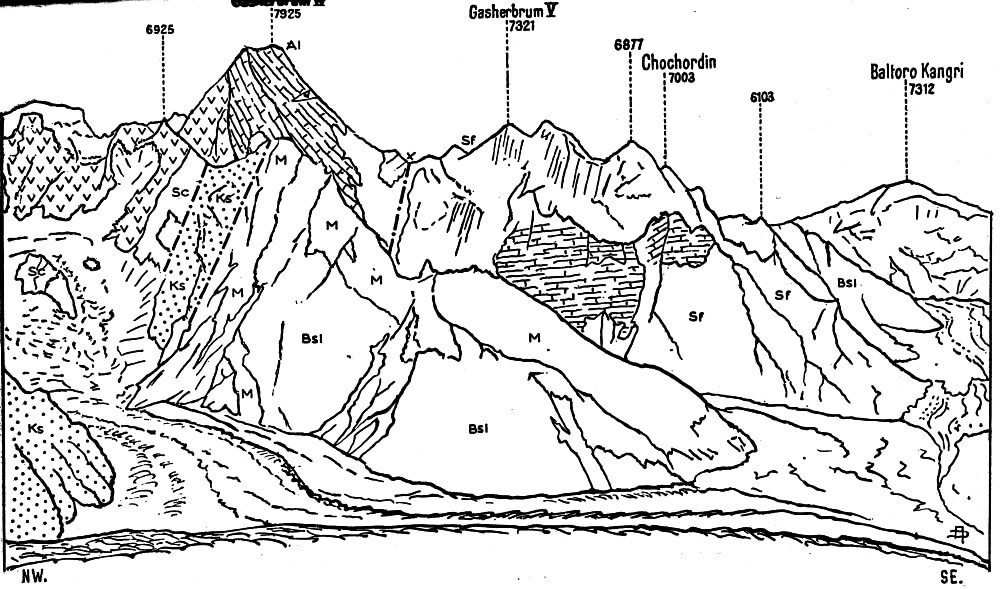 The peak at 5603 m, on the west side of the confluence of the West Gasherbrum glacier, is composed of grey and yellowish limestones, which are rather different from those of the opposite side. The same grey limestone, with a yellowish weathering surface, composes the left spur of the confluence of the South Gasherbrum glacier with the Upper Baltoro glacier, and also the mountain standing above it. The beds dip 55° to the south-southwest.

These limestones overlie black slates and dark sandstone and extend towards Gasherbrum V (7321 m), of which they compose the top. It must be mentioned that this group of limestones become more crystalline southwestwards, though they retain evidence of their organic origin in the completely calcified fossil remains.

The southwestern slope of Gasherbrum V is composed of black slates with some arenaceous intercalations, generally dipping northwards at 45°. Near the top of the peak at 6103 m (Chochordin crest), a suite of overturned folds occurs in these slates.

Between the limestone at the top of Gasherbrum V and the black slate there occurs a sequence of mostly white or light-grey limestone separated by intercalations of black shales (?). In the lower part the beds are dipping at 45-50°, but steepen upwards, until, at the summit ridge of the mountain, they become almost vertical.

The presence of fossiliferous marble is perhaps unusual, but similar rock-types have been observed elsewhere. The Permian limestones were no doubt thermally metamorphosed at the time of the intrusion of outliers of the quartz diorite body, now mostly hidden under the glaciers. We also believe that the Triassic limestones underwent intensive crushing; but were not metamorphosed.

The calcareous conglomerate of the moraine may be derived from outcrops of the Urdok Conglomerate which is much more common in the basin of the Abruzzi glacier.

The main limestone mass overlies the sequence mentioned above, composing the whole of the main ridge of the Gasherbrum range which connects Gasherbrum IV with Gasherbrum I.

Probably between Gasherbrum V and Gasherbrum IV a fault runs between the Permian and the Norian limestones. On the southeast slope of Chochordin the bedding of the Permian limestone with the dark shales intercalations (Shaksgam Formation) is inflected but nearly vertical, except on the foot where the bedding dips south-southwest. The blocks of quartz diorite of the moraines of the South Gasherbrum glacier derive from the walls of Gasherbrum IV where there are large outcrops, but another outcrop, not yet known, must exist within the east branch of the basin of the South Gasherbrum glacier.

The left hand lateral moraine of the same glacier contains the same rocks as the right hand moraine, as well as huge blocks of grey and red calcareous breccia, yellowish arenaceous limestone, and some fragments of the dioritic rock. In this moraine the grey limestone predominates while the black limestone is less frequent than in the other moraine. The blocks of breccia came down from the west side of Gasherbrum I, where they can be seen to outcrop.

Part of the limestones is definitely Permian, as demonstrated by the presence of Neoschwagerinae into the blocks; the other prevailing part has not yielded here any determinable fossil. Nevertheless it is to be referred to the Aghil Limestone of the Neotriassic (Norian). In this connection it is necessary to take into consideration the breccia and conglomerate outcrops on the western side of the Gasherbrum I, which are the source of the big blocks scattered within the left-hand moraine of the South Gasherbrum glacier. These breccias and conglomerates are of the same type as those which outcrop in the valley of the Urdok glacier (Urdok Conglomerate) where they occur abundantly. They are of the same type as those which, in the Shaksgam and in the Siachen valleys, mark the base of the thick Mesozoic calcareous-dolomitic sequence trans-gressively overlying the Permian portion of the Shaksgam Formation. The red and grey breccias and conglomerates of the Urdok valley cannot be continually followed so as to join those of the southwestern side of the Gasherbrum I. However, the outcrops are no more than five kilometres apart, while the distance from the Siachen outcrops is shorter still.

The red and yellowish arenaceous limestones of the moraines of the South Gasherbrum glacier, probably are associated in situ with the conglomerate and are to be compared with rocks of the Chikchi-ri Formation of the Shaksgam valley, or with the similar limestone overlying the conglomerate.

The whole of the Gasherbrum I is composed of light coloured limestones, folded under the shape of an antiform and disturbed by secondary folds and faults (Fig. 3). The above data were collected from the Upper Baltoro valley, but I dispose of other data obtained from the opposite side (NE) of the Gasherbrum I massif, that is from the upper valley of the Urdok glacier. From the outlet of the Sgan valley — tributary of the Urdok valley — I was able to observe the lithology of the eastern side of Gasherbrum I. It consists, from just above the base to the summit, of thick beds of light coloured limestones or dolomites, dipping moderately. The limestones are underlain by a very dark coloured rock, probably black slates or gneiss.

Fig. 3: The structure of the Gasherbrum I as seen from the Conway Saddle.

The multicoloured breccia and conglomerate which I mentioned in the southern side of the massif and belonging to the Urdok Conglomerate, outcrop also in the northern outliers of the Gasherbrum I, i.e. in the ridge dividing the Sgan valley from the Urdok one. There is then a continuity of this formation across the two opposite sides of the Gasherbrum I massif. 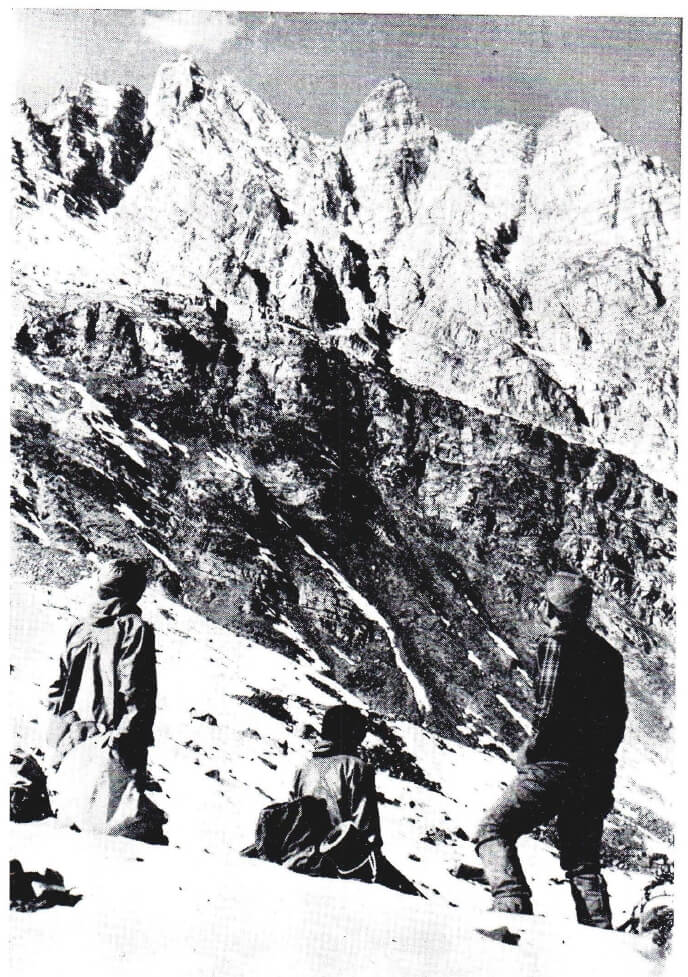 33. The east face of (mani Mahesh) Kailash, 18,556 ft from Camp I. The main peak is on left and the left hand skyline southridge leads to Chobu pass. Note 13 Photo : Dhoren Toolsidas 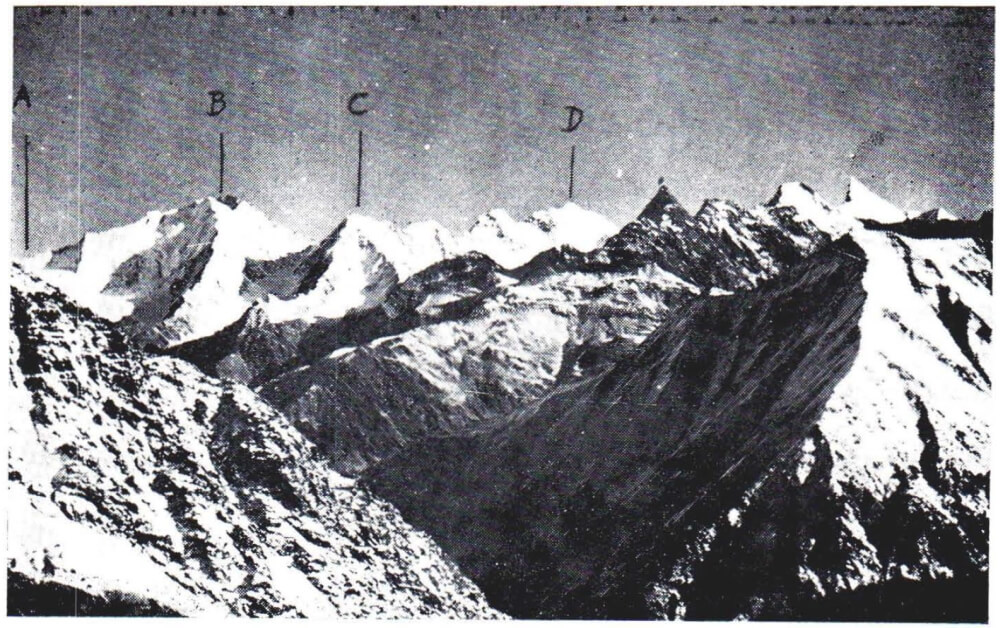 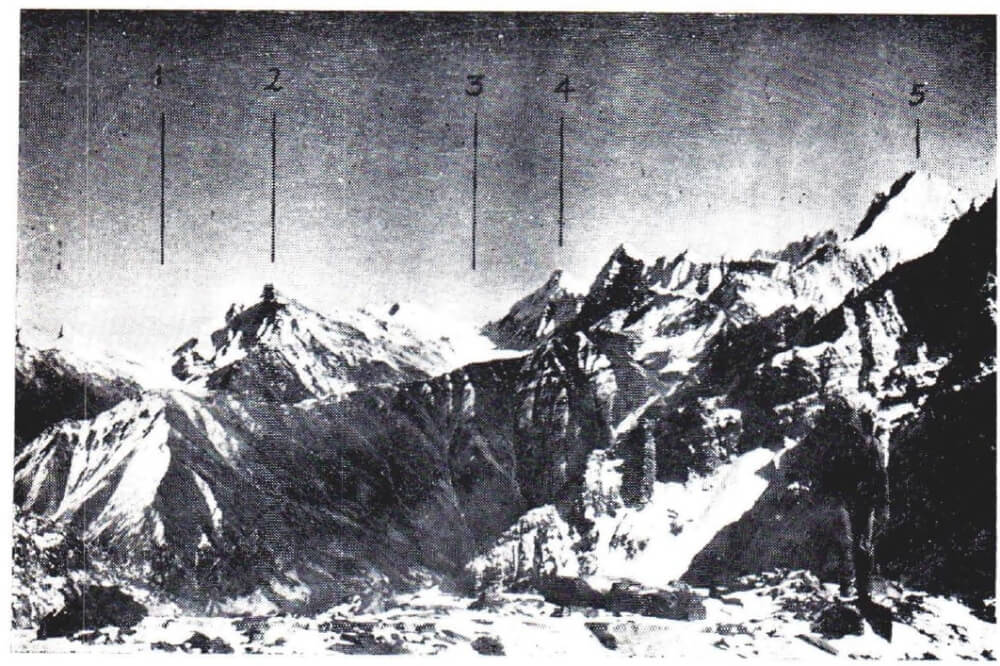 About the tectonics, the structure of the Gasherbrum I is represented by an antiform as we can see in the Fig. 4. The antiform together with the one crossing the eastern slopes of the Falchan Kangri (Broad Peak), both with NW-SE axial trend, are part of the folded system of the Shaksgam valley even through marginaUy

The antiform continues toward southeast and probably reaches the Siachen valley near the Indira la; then it disappears under the glacier. The synform which follws toward northeast crosses in NW-SE direction the upper part of the Gasherbrum and the Urdok valleys.