It was on the evening of January 25, 1965, when my companions Oki, Hiramatsu and I set sail from Kobe on board the s.s. Chusan of the P. & O. Orient Line. I got off alone at Hong Kong and flew to New Delhi to negotiate with the Government of India and the Nepalese Embassy for obtaining a licence to transit traffic to Nepal through India before the s.s. Chusan reached Bombay.

One month later, five remaining members left Japan for Kathmandu via Calcutta by Air-India and arrived at Pokhara on February 25 via Kathmandu by a Dakota plane.

With five tons of cargo, Oki and Hiramatsu arrived in Bombay and travelled to the border town Nawtanwa by railway after changing trains three times. I flew to Bhairawa via Kathmandu with K. P. Subedi, who is the Liaison Officer of the Foreign Office of the Royal Nepal Government.

The timing was good. I met Oki and Hiramatsu in front of Bhairawa's Custom House after seven days' separation. We then cleared all the luggage. All the luggage was carried from Bhairawa to Pokhara by a Dakota plane. We were now ready. All the members met at Pokhara airport.

On the last day of February 1965 the All-Japan Himalayan Expedition left Pokhara for Mukutgaon. We had had the ambition to climb Dhaulagiri II for a long time. This is the highest peak (7,751 m.) of the Dhaula Himal range which runs from north to south and to the west of Mt. Dhaulagiri in the Nepal Himalaya, and this mountain is called ' Mula Kang' by the villagers of Mukutgaon and Sangda Kho.

An Austrian party tried to climb this peak in 1963 and several Japanese expeditions went to this region for a reconnaissance in the past. It had not yet been climbed by any human being. So our party made it their main objective to be the first to climb to the summit of Mt. Dhaula Himal.

From the beginning there were problems to solve in this expedition. They were in regard to the caravan and whether our transporting scheme would succeed or not. The opinion of Mr. Kiichiro Katoh, leader of the Keio University's Expedition party that went to this mountain for reconnaissance in 1958, was, ‘This caravan will succeed if you get a sufficient number of yaks at Dhangar Jong or Sangda.'

But there was another opinion contrary to Mr. Katoh's. Mr. Shojiro Ishizaka, leader of a 'Round Dhaulagiri' party of the Nihon University Expedition in 1962, had said, ‘If I go once again, I shall go by the Barbung route.'

There were two caravan routes from Pokhara to Dhaula Himal. One was the southern route: Pokhara, Beni, Dhorpatan, Jung I a, Bhang Jyang, Tarakot, Barbung Khola, Therang, Base Camp, ind the other was the northern one: Pokhara, Gharapani, Shika, Tatopani, Tukuche, Dhangar Jong, Sangda Kho, Khog La, Thuje I a, Mu La, Base Camp.

Both routes were difficult and both offered many problems. One problem was transportation; porters, zoppas and yaks had to cross over three high passes covered by deep snow. The other problem was famine raging in Thakhola and Thorbo in the inner part of the Himalayas.

Finally we decided to go to Base Camp by the northern route as Indoraman Serchan suggested.

In Kathmandu I also asked Colonel James O. M. Roberts for some advice. At that time his opinion was almost exactly the same as Mr. I. M. Serchan's suggestion. He said, ‘The passing of Mu La may be difficult. If it is impossible for you, you may take an alternative route via Tsarka.' To do this it would lake about seven days of unnecessary caravan.

At the first stage of transportation we used 60 mules and 50 porters up to Dhangar Jong. After nine days' caravan in the Kali Gandaki ravine, we arrived on March 8 at Dhangar long village, which was the first relaying point of our transportation plan. Our luggage of 5,500 kg. was smoothly conveyed to that point by mules and porters under the able assistance of two Thakalese benefactors, Indoraman Serchan and Amrit Prasad Serchan, in Pokhara Bazar. 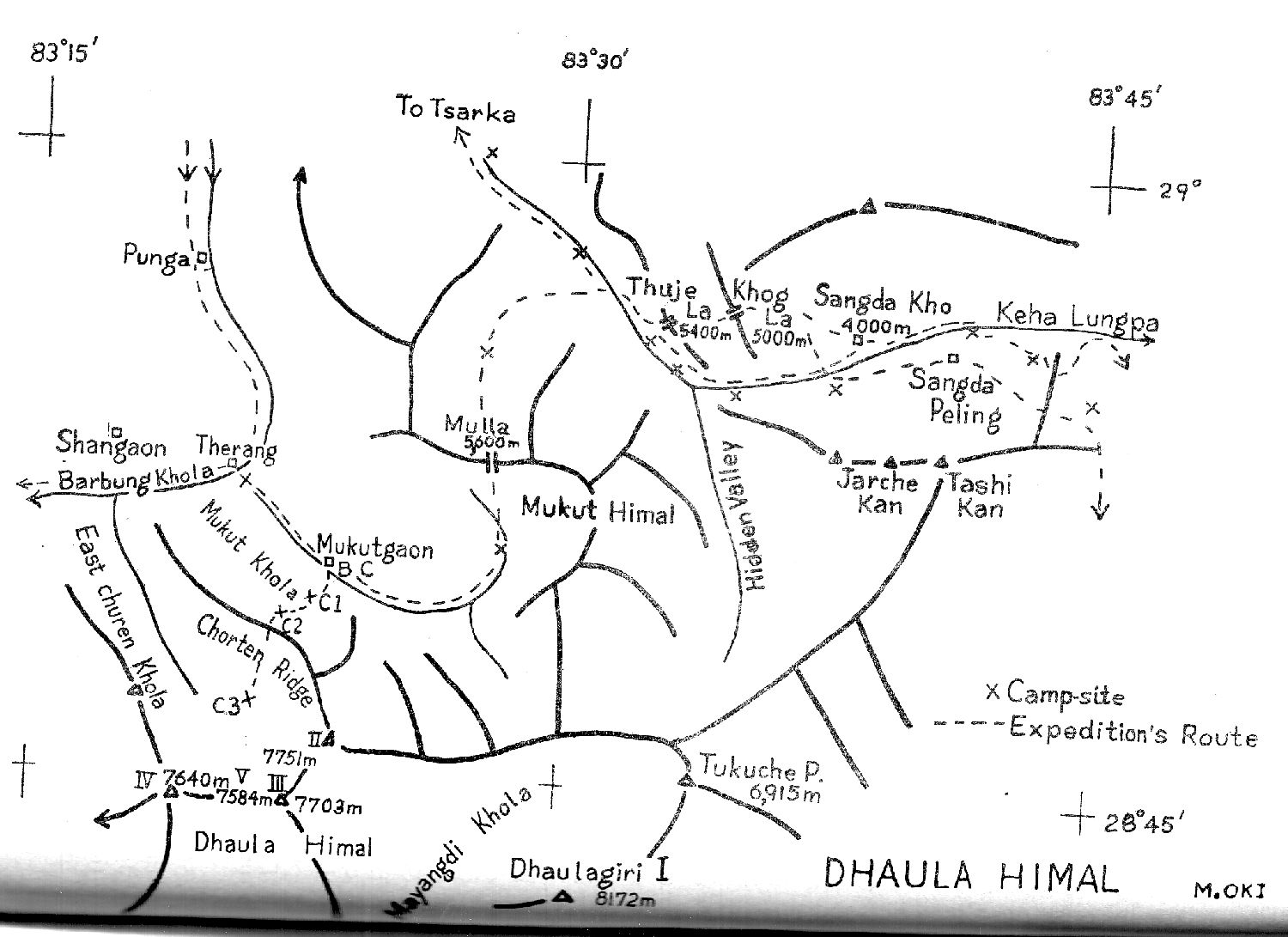 Everything went well to a certain degree with the first caravan (o Dhangar Jong, until a Tibetan horse met with his death when he fell together with two loads into the Kali Gandaki ravine.

On March 9 we dispatched from Dhangar Jong to Sangda I'eling Oki with Amano, two Sherpas, and a villager, Kimson, 10 guide us and examine snow conditions along the route. On (he following day this first reconnoitring party came back to Dhangar Jong camp and reported that the pass near Muting was covered by snow six feet deep and that the luggage could not be carried through by porters. As we expected, villagers in Falak and Dhangar Jong refused to start a caravan immediately as they were afraid of the snow.

On March 17th we sent a second reconnoitring party to Sangda Kho. The party was led by Oki and consisted of Osawa, six Sherpas and one strong villager, Dorje, as a guide. From this date snow continued to fall for five days, which caused the caravan to be delayed for 40 days. This heavy snowstorm forced the party into the shelter of a rocky cave by the side of Dhakha Lungpa. The party made their way through the lowest route at the confluence point of Keha Lungpa and Kali Gandaki through Keha Lungpa in order to avoid deep snow. After six days' suffering, the caravan and Oki and his party arrived at Sangda Kho via the ruined village, Sangda Old.

On the following day, March 28, an avalanche occurred suddenly when Oki, Osawa and their party reached a point 100 metres under the pass of Thuje La. We lost two Sherpas, Lhakupa Gelbu and Mingma Tenzing, in this accident. After the snow stopped falling, the main party left Dhangar Jong on March 29 and arrived at Sangda Kho on April 2. We climbed to Thuje Khola and searched for the two missing Sherpas while we stayed there.

After three days of hard searching in the thin air at 18,000 feet above sea-level we found the remains of Mingma Tenzing and Lhakupa Gelbu under six feet of snow debris. At that time the snow was approximately eight to ten feet deep in Thuje La. The party's doctor, Y. Hirose, diagnosed that they were crushed to death by an avalanche.

We had to stay there for 23 days as our way to our proposed Base Camp was closed by deep snow. After the funeral ceremony for the two Sherpas, we made our third caravan from Sangda Kho with 50 yaks and 29 villagers for Mukutgaon via Tsarka on April 24. We went by way of the dangerous route of Sukhasangba, highlands of Lupche Shalma, Thorbo village of Tsarka and Barbung Khola.

A 66 days' long journey ended finally on May 3 when we arrived at Mukutgaon. On the next day, after we reached Base Camp, Mukut village's headman, named Chopteng, returned to his home after 70 days' absence. He could not return back to Mukutgaon as the route of Barbung Khola was closed indefinitely due to an epidemic of smallpox.

Chopteng reported that many villagers died as a result of the smallpox, and the hamlet of Shanggaon was totally destroyed.

The villagers' customary practice in an emergency like this is to close all accessible routes. This is their only method of keeping in quarantine against further contamination of such a contagious disease.

We would not have come through this northern caravan route if we had known that wrong snow conditions existed through the gorge of Keha Lungpa in the early spring of the pre-monsoon season.

We were ordered not to go out from Sangda Kho due to heavy snow. So often I grumbled: 61 wish I were on the Barbung route!' In fact, in Sangda Kho I stamped my feet in mortification. However, there was no use crying over spilt milk. Instead of the northern route, however, had we taken the southern route between Pokhara and Base Camp, it could have led to a serious situation as we—all members, Sherpas and porters—could have been caught in a storm of awful violence in the valley of Barbung Khola.

The delaying of the caravan schedule was discouraging. We found all the doors closed against Dhaula Himal since we started from Pokhara. Then, as a last resort, we made a final quick ascent within a short space of time after establishing the Base Camp by the Mukut Khola.

We also established Camp I (4,700 m.) and Camp II (5,200 m.) on the north side of Chorten Ridge on the same day of May 7. The reconnoitring party passed a small Col (5,500 m.) of Chorten Ridge and entered the inside of East Churen Glacier.- On May 9, Camp III was established by Oki, Hiramatsu, Osawa and three Sherpas on a moraine at the glacier.

On the next day an accident took place. A high-altitude porter named Jhamang Tenzing suffered a fracture of his back- hone by slipping down a glacier on East Churen Khola and we had to carry the sufferer from Camp II to Base Camp. 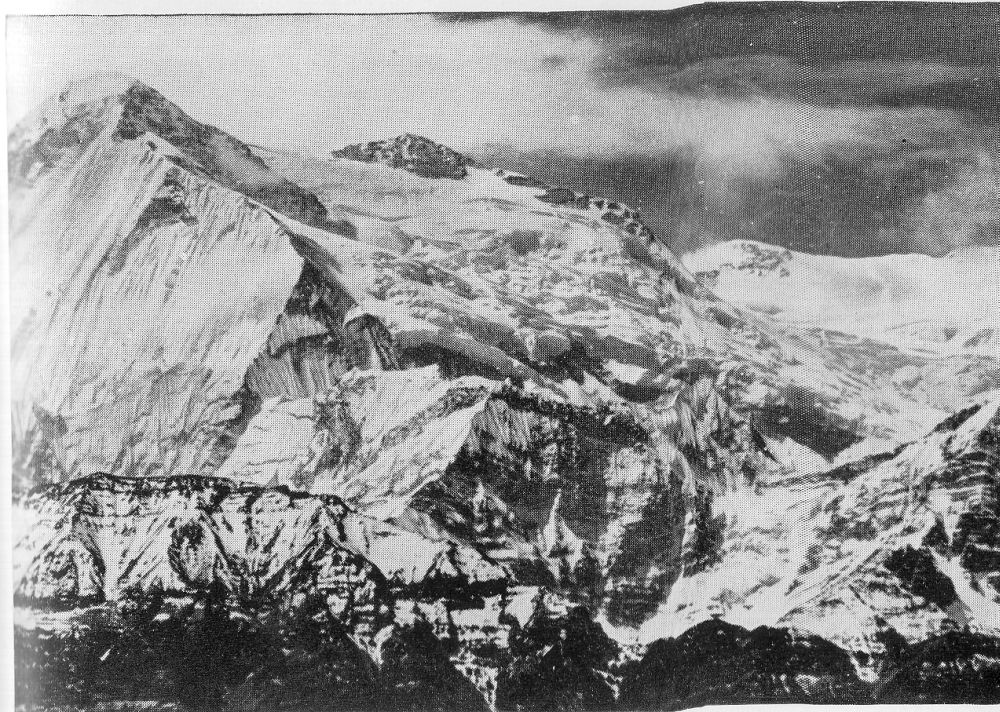 DHAULAGIRI II (LEFT) AND III (RIGHT) FROM THE NORTH (TELEPHOTO). 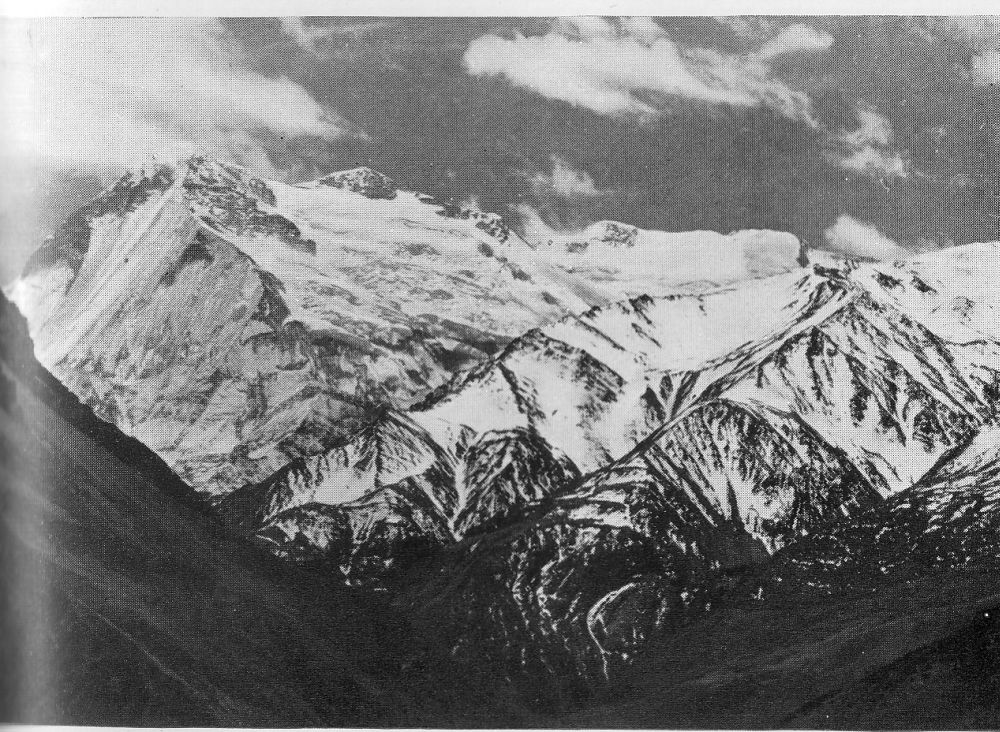 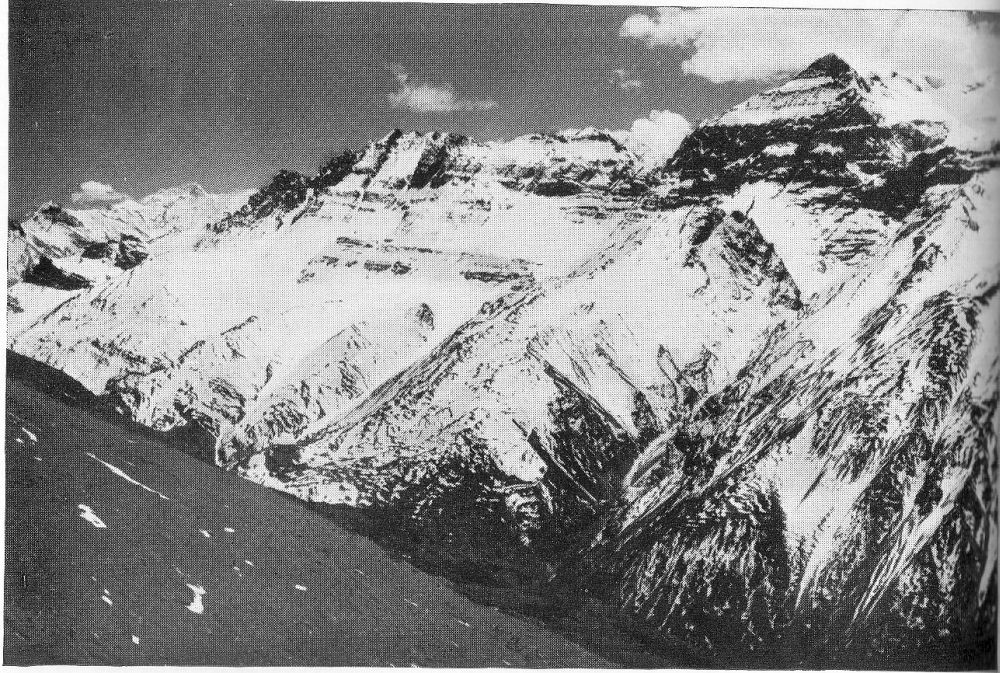 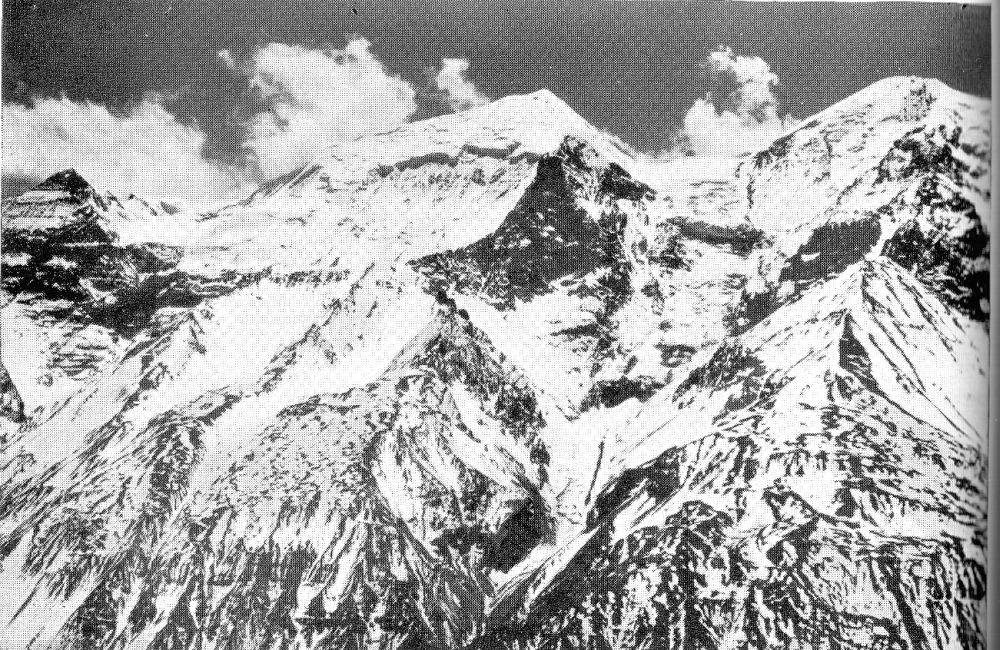 We spent six precious days doing this dangerous rescue work, making our way up, down and over the knife-ridged Chorten. On May 18, we dispatched a small advance returning party for the purpose of transporting our wounded Sherpa to a hospital m Kathmandu for medical treatment. We had already lost two Sherpas in the unexpected accident in Thuje La and now one Sherpa was injured. In addition we were 50 days behind our original schedule owing to the late heavy snowfall on our way between Dhangar Jong and Mukutgaon.

Also we did not have enough food in stock for climbing due to (he Sherpa's rescue work. Under these circumstances the climbing plan had to be given up. We withdrew Camp I to Base Camp on May 20. On our return trip, we divided the party on May 22 into two groups and took the Barbung route and the Manangbhot route separately.

We look forward to the time when we will once again attempt to conquer Dhaula Himal.