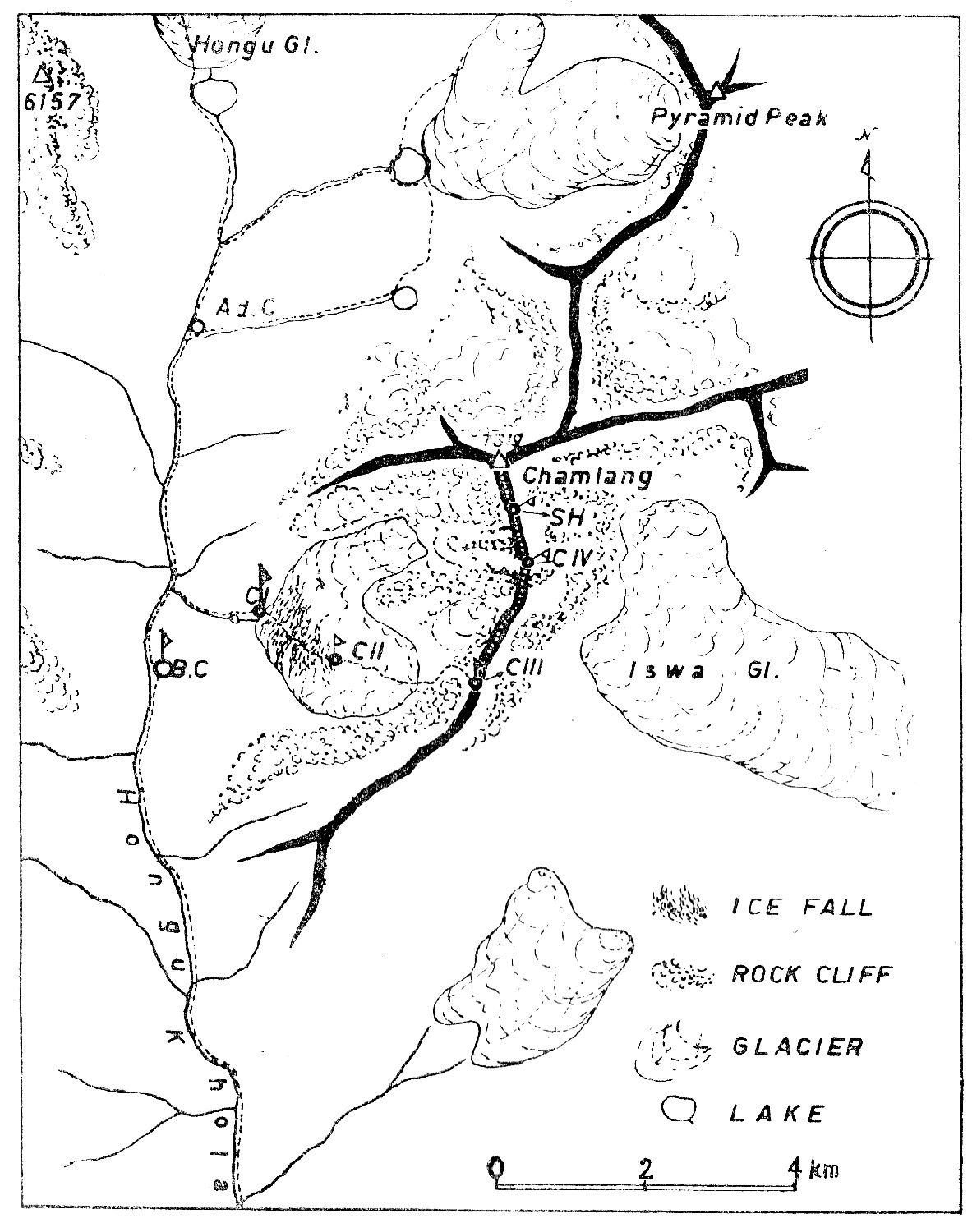 MOUNT Chamlang (7,319 m.) in Eastern Nepal lies about 10 km. south-west of Makalu, and is situated on the eastern wall of the Hongu Valley—‘Chamlang' means ‘big bird flapping wings' in the native language. Indeed, peaks of the Chamlang range extend in the sky like a huge white screen, and sometimes one imagines a white monster bird fully spreading its wings. The New Zealand Alpine Club's Himalayan Expedition of 1954 led by Sir E. Hillary,1 and the Mount Chamlang Survey Expedition of 19552 undertaken by N. D. Hardie (with A. J. Macdonald) after he left the successful Kangchenjunga Expedition reported the difficulty of climbing Chamlaflg. However, after studying notes, maps, photographs and Harctie's letter from New Zealand, the Academic Alpine Club of Hofckaido (A.A.C.H.) decided to attempt Chamlang from the west in 1962.3

The composition of our party was as follows: (1) Dr. Seiki Nakano (Expedition Leader and Doctor, age 57), (2) Takeo Okamoto (Assistant Leader, age 30), (3) Susumu Kobayashi (age 29), (4) Toshikazu Nagamitsu (age 29), (5) Hisashi Kukimura (age 26), (6) Soh Anma (age 25) and (7) Yoshihiro Suzuki (age 24). Although none of us had taken j^art in any expedition to the Himalayas before, we were experienced in climbing our home mountains in severe winter. In Nepal we were joined by Manik Tuladahr (Liaison Officer), Pasang Phutar III (Sirdar) and four other Sherpas.

Expedition affairs having been arranged to our satisfaction, we left Japan by air on March 21, 1962, arriving in Calcutta the next day. There was trouble and delay in clearing our equipment in India and Nepal. Eventually we started travelling from Husule Hili near Dharan Bazar on April 17 with about 100 porters to carry the expedition's baggage. The party marched through Dhankuta, Tumilingtar and Dingla, to Gudel where we arrived on April 25. We enjoyed the journey through the lovely land of Nepal. It was exciting when we caught our first sight of Chamlang and Makalu on April 22 from a hill near Tumilingtar. At Gudel, all porters were replaced by new ones and we proceeded up the Hongu Khola4 to set up Base Camp. There was much snow along the difficult route and it sleeted or snowed every afternoon. We crossed five mountain passes which are from 4,000 m. to 4,500 m. high. Many porters dropped out and we had to make repeated trips with the remaining ones to carry the whole baggage. It was planned to establish Base Camp in one week, but in fact we spent two weeks on account of bad weather and the dangerous trail.

On May 3 we set up Base Camp at 4,200 m., but as it was too far from our objective, we moved it later to a height of 4,800 m. By May 12 all our baggage had been brought to Base Camp. From there reconnoitring parties were sent to look for the climbing route, but a week passed without finding anything appropriate. Finally, we decided on May 14 to take the ‘Chohatsu' route on the glacier between the West and South Ridges—so called because of the leader's nickname. Camp 1 was set up at 5,200 m. on the glacier, and on May 17 we pitched Camp 2 at 5,700 m. on the ice-fall, having passed many seracs and crevasses. Camp 3 was made on the South Ridge on May 20 at 6,300 m. Thereafter the climbing difficulties increased, and the weather deteriorated, with high winds, snowfalls and temperatures dropping to 20° C. The attack on the South Ridge was made possible with fixed ropes and rope ladders, and after almost a week, Camp 4 was set up on May 27 at 6,650 m. on the ridge. On the way to the summit there was a big black gendarme above Camp 4, and it offered an obstruction to attempt the summit in one day from the latter. On May 30 the climbing party of Anma and Pasang Phutar III started from Camp 4 and overcame the gendarme, having employed several pitons and taken half a day. After three hours of hard work, a snow-cave was made at 6,850 m. just above the gendarme. Having spent an uncomfortable night in the bivouac, they left the snow-cave at 6 a.m. after a long and grim struggle against strong wind and bitter cold they reached the summit at 2 p.m. It was a clear day, and Everest, Lhotse and Makalu were seen in the blue sky. On the descent, Pasang Phutar III slipped on the ice and was hit on the waist bone, but not seriously. The summit pair arrived at Camp 4 at 7 p.m. Because the weather was getting worse, a second attempt was given up, and on June 1 we began to prepare for departure. On June 4 all of us gathered at Base Camp and celebrated the brilliant success. On June 9, forty porters went down the Hongu Valley accompanied by Sirdar Pasang Phutar III and returned to Husule Hill near Dharan Bazar with our equipment. We crossed the Ambu Lapcha Pass and returned via Namche Bazar, Pakhomagaon and Gudel. At Pangboche I had the opportunity of examining the so-called 6 Yeti's head skin and ' Yeti's handSo far as I could make out, the head skin might have been the old waste skin of a wild goat, and the hand might be the mummified hand of a Mongolian woman.

On August 3 we landed at Tokyo Airport and our journey was over. 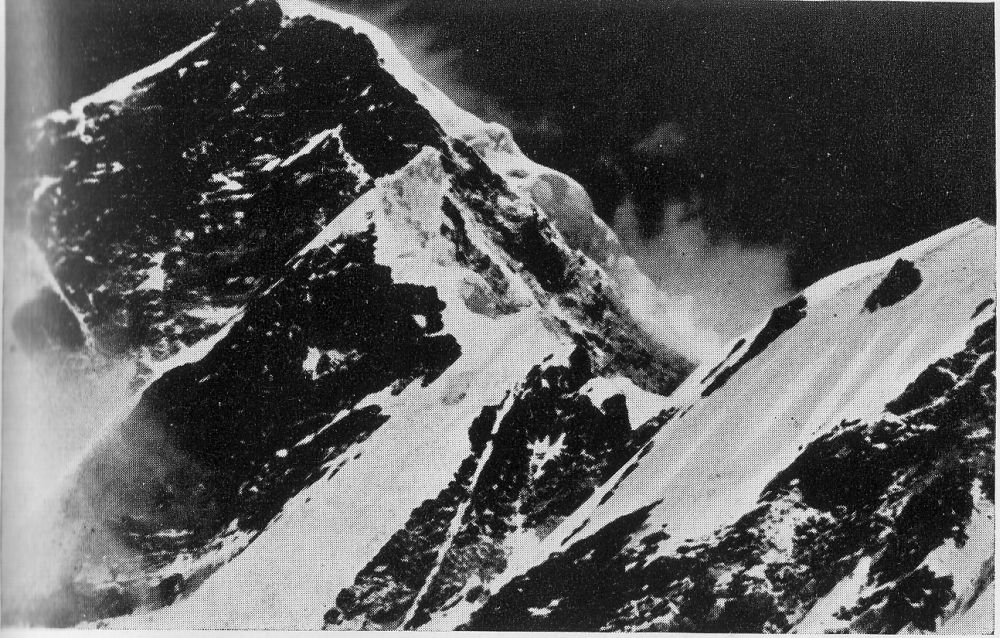 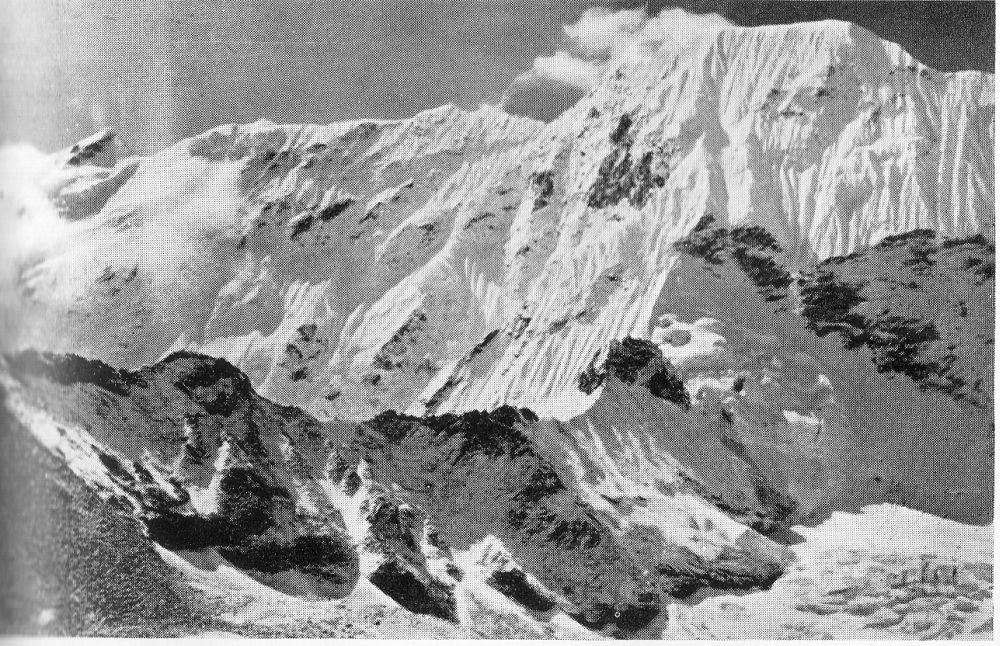 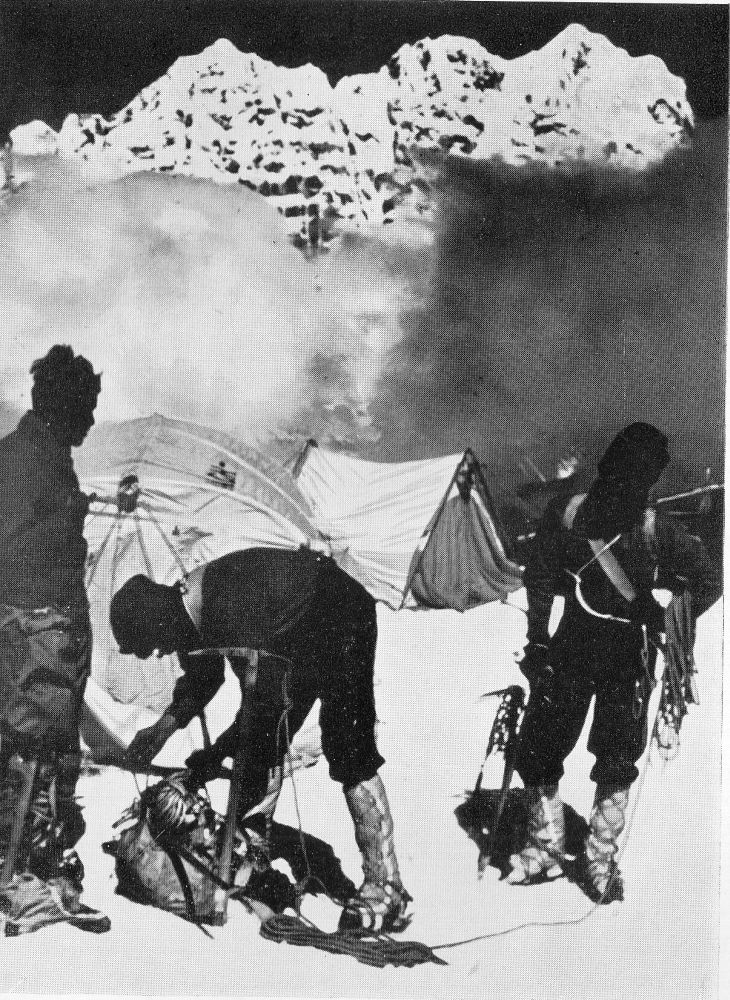