It was the delightful vagueness of the Darmaganga as shown on the old edition of the quarter-inch sheet 62B and my inability to find any account of an attempt to climb the Panch Ghuli that made me decide on this district for my first Himalayan venture. While my companion, J. de V. Graaf, and I were planning, we were not aware that these peaks were also on the programme of the Scottish Himalayan Expedition, and it was not until we read of their doings that we realized that we had wasted valuable days on a route that they had already found impracticable. But I anticipate.

Circumstances ruled that for both Graaf and myself climbing must be during and at the end of the monsoon; and some monsoon that of 1950 proved to be. I left Ranikhet by bus on 17th August with our sirdar Pasang Lama, Nima, and seventeen Dotiali coolies. Graaf was to follow with our third Sherpa, Namgyal. From Almora the march to Duktu at the foot of the Panch Chuli, via Askot, the Kali river to Khela, and then up the Darmaganga took ten days. I found out later that I had just missed the returning Scots at Dindihat.

The Panch Chuli group from Duktu is a most impressive sight. The five main peaks from south to north measure, respectively, 21,120 (Telkot), 20,780, 20,710, 22,650, and 21,030 (Ngalaphu) feet in height. The last-named masks a sixth 'Chuli', Rajramba, 21,446 feet. The Sona glacier, which is dying, descends from between peaks 21,030 and 22,650, and merges with the Meola glacier about 5 miles above Duktu. Between the two glaciers are tiers of cliffs, above which is a sloping grass and scree shelf and then the broken ridge leading up to the final pyramid of the highest of the Panch Chuli. On 31st August we established our base camp at about 12,400 feet on a lateral moraine of the Meola where Graaf joined me next day. A well-defined sheep-track ran up to the ledge immediately above camp, bore left and then half-right across a gully to a shelf at about 14,700 feet. We placed our Camp II there and found empty oatmeal tins to show we had been preceded. We hoped to gain the north-east summit ridge from here, but after three days' work realized, as Murray had already done, that this was impracticable. On the 8th we tried immediately above Camp I and after passing the Scots' Camp III pitched our Camp IIa on a rocky ledge at about 16,800 feet. On the 9th I was laid low with tummy-trouble but Graaf and two Sherpas managed to get on to the upper Sona where they found that at its head was a cradle of 6oo-foot clifls offering no route to the north-east summit ridge. We considered the possibilities of Ngalaphu but agreed to try our luck with the Meola and the south col. On the 9th we found an easy way from Murray's Gamp III to the upper Meola and pitched our final Gamp II at 16,000 feet, about 400 feet below the main icefall. Two days later we got up to the top of the icefall and optimistically decided to install our Camp IV there next day, but the monsoon, which was overdue to abate, decided other-wise and enforced on us a stalemate which lasted nearly a fortnight. Not till 27th September were we able to get to the foot of the icefall again and on 28th we placed our Camp IV above it at about 17,500 feet. That night we had 37 degrees of frost, our coldest so far. On the 29th the sun hit us early and we ploughed our way upwards through thigh-deep snow. We could now see the whole eastern face (at close quarters) from the summit down to the glacier. The average slope is at an average of 550 but is much steeper at the top. The ridge towards the south col has a rather easier gradient but is very broken and heavily corniced. We now hoped to find a better approach from the Goriganga (west) side and placed Camp V at about 19,700 feet and pushed on round the corner. 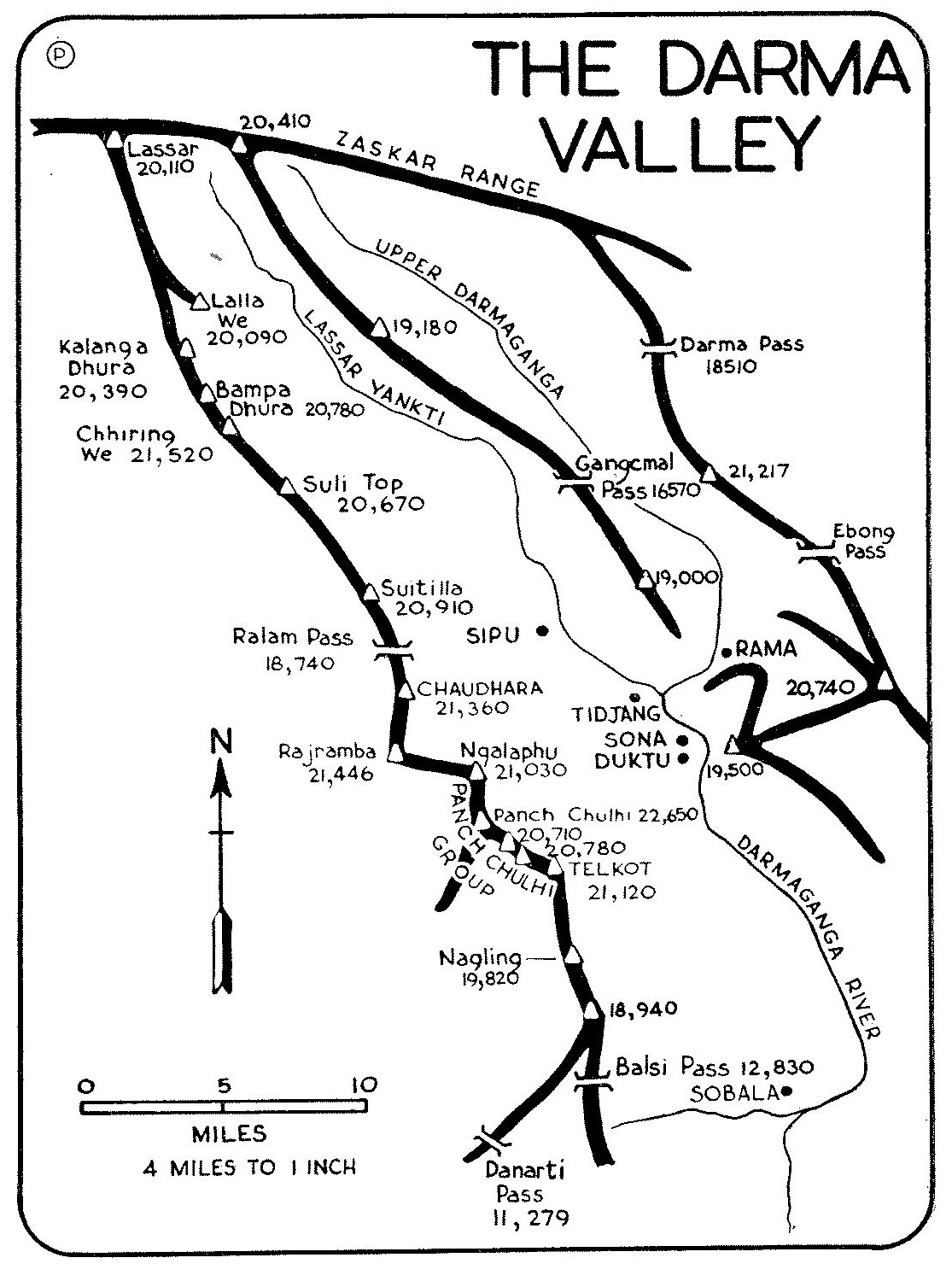 What we saw blasted our hopes: the Goriganga side of the col falls precipitously to the Panch Chuli glacier and the almost vertical face rises another thousand feet above the col, making the lower part of the summit ridge a razor edge. Hardly a route! After a most uncomfortable night Pasang and I went on to see the actual condition of the snow on the south-east face, but had to give up before we had made 400 feet. That evening we agreed to admit defeat. One day perhaps an ice-ace will don crampons and make the top from a bivouac near the col, like ours, but not in similar conditions.

The other 'Chulis’ seemed to offer no practicable routes, so after a long day of withdrawal to base we allayed our feeling of frustration, in warmth, with mutton instead of pemmican. Days later we had imposing views of the mountain from 12 miles to the north-north- east and from 25 miles to the south-west. It is exceptionally steep. On the Goriganga side the rise is 17,000 feet in 18 miles. From the Darma side the rise is 12,500 feet in 8 miles. The final pyramid is tilted towards the Darma and the Gori side of it is the less steep—2,000 ft. at 40° compared with 3,500 feet at 550 above the Meola. On the Gori side the cliffs containing the Panch Chuli glacier offer no hope of a route and the Daccani Balati is a death-trap. We could not see the Uttari Balati.

Panch Chuli was to have been the late Frank Smythe's next mountain after his last Sikkim trip. It is comparable in loveliness with Siniolchu, considered by many mountaineers to be the most beautiful peak in the world.

After our failure we decided to have a look at the Lassar Yankte, a tributary of the Darma, and if practicable to have a shot at Chiring We, 21,520 feet. Starting up the Lassar we passed several glaciers decending from the Gori watershed and had fine views of Suitilla, 20,910, and Suli Top, 20,670. We thought that these two would probably be more approachable from the Gori watershed. Anyhow Chiring We, the 'hill of long life', had excited our interest as had also an unnamed peak of 21,217 feet which the Survey map showed between the Yankte and Darma valleys. So, 7th October found us scrambling up the Chiring We moraine. We had hoped that being farther north and behind the main Himalayan range we would escape the end-monsoon snows, but on the 8th we only got up a few hundred feet before finding ourselves wallowing in powdery ava- lanche-prone snow. It was not good enough so we decided to look for peaks with rock routes and scanned Lalla We which seemed to be a feasible proposition until further examination showed us we were wrong. After a brief visit to the head of the valley we returned to Duktu to reprovision and then set off up the Darma in search of peak 21,217. From the Lassar-Darma divide we had a magnificent view of the Gori-Lassar watershed as far as the Panch Chuli, but of peak 21,217, which was clearly shown on sheet 62, there was not a sign, till, scrambling up a small top of 18,000 feet, we found that it was the fine peak we could see across east of the Darma. Though winter was approaching we decided to have a shot at it. From the Darma side it looked too fierce, but a glacier winding round its back seemed to offer a less difficult route, so we worked up through an icefall of about 600 feet and camped at some 18,500 feet. The next day dawned bright but very cold. We plodded on through deep soft snow, getting colder and colder—conditions were getting steadily worse, both where we were and higher up. Prudence dictated withdrawal and we obeyed. We started our homeward march on 23rd October, crossing the Gorijanga at Mawani and reaching Baijnath on 4th November.

Since writing we have learnt from Brigadier Osmaston of the Survey of India that he also had been unable to identify Peak 21,217.

Mr. Snelson ends his story with grateful acknowledgements to the Himalayan Club for their indispensable assistance and with thanks to Mr. Hugh Ruttledge and Mr. Charlton Thomas for advice and help.

We have been unable to obtain any account of a previous attempt on Panch Chuli by Herr Heinrich Harrer—Peter Aufschnaiter's companion on his escape journey to Lhasa—with the above Mr. Charlton Thomas. 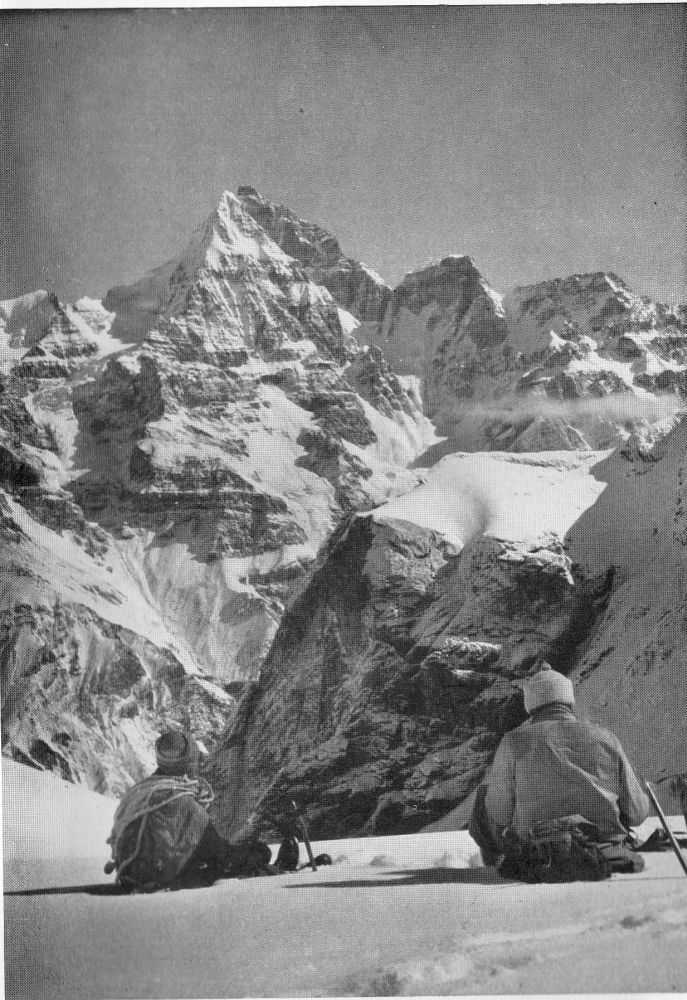 Pasang and Graaf on the Lassar-Darma watershed peak looking over the Darmaganga to the magnificent peak we thought to be peak 21,217 ft. on the Darma-Kuthi watershed 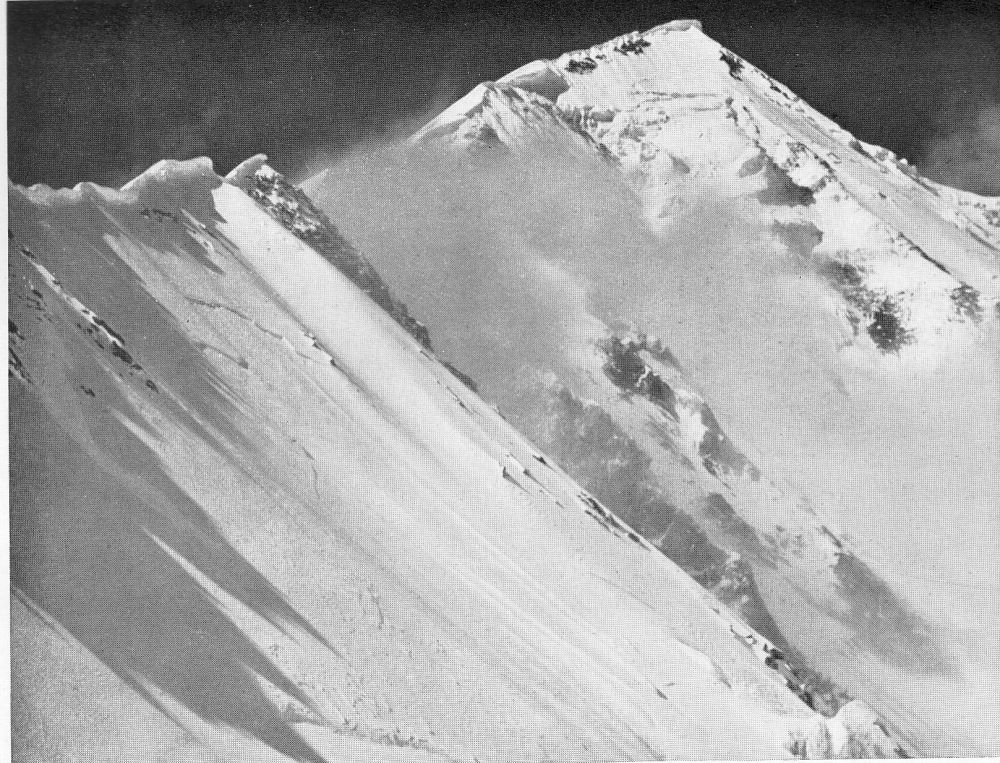 The south ridge, very foreshortened, and the south-east face of Panch Chulhi from near the south col. Note the heavy cornices and windslab avalanche marks on the snow

The Eastern Aspect of the Gori-Lassar Watershed.