Trisul seemed, from the accounts of Dr. Longstaff and of his successor (26 years later) Peter Oliver, to be a mountain second in interest only to Nanda Devi and, moreover, not necessitating climbing standards unduly high for the novice, so Gurdial Singh and I decided to make an attempt on it.

From the first time we got together we had no doubt but that should Trisul prove so ungracious as to deny to us the tip of the trident of Shiva we would at least have had a month of happy companionship in the high hills. Beside our two selves we had Flight-Lieut. Nalini Javal, Surendra Lai, Gyaljen Mykji, Dawa Thondup, and Lhakpa Tsering, and, complete with equipment collected from sundry places and foodstuffs purchased and tabulated by Gurdial Singh, we assembled on the platform at Dehra Dun. We had to abandon the more lovely introduction via Ranikhet, the Kuari pass, and Tapoban for the shorter pilgrim-route involving the rail journey to Kotdwara with a change of gauge at Najibabad in the small hours. The transfer of 1,300 pounds of kit and seven members into an already filled-to-capacity third-class compartment demanded some unavoidable pushing aside of other intending passengers! At Kotdwara we soon had the baggage loaded on a waiting bus in which we bumped our way to Srinagar and Ghamoli. Here we had the usual trouble over muleteers' charges and effected a not very satisfactory compromise. A young French diplomat, who was joining his compatriots for part of their Nanda Devi venture, joined us at dinner.

We found Lata denuded of coolics and remarked: 'Why do the French take so many for their Expedition?!' and then (I quote Nalini Jayal) 'Kesar Singh,1 a Garhwali veteran of Kamet and Trisul, appeared like a prophet and, thrilled by the prospect of scaling a familiar peak with a fellow Indian, not only volunteered, despite his age, to join us, but emphasized his own indispensability and swore to move Heaven and Earth to obtain from other villages the fifteen porters we so desperately needed.' He proved as good as his word and eventually, after scrapping and rebagging, we set off with eight of our porters for the coolness of Lata Kharak. We delighted in the luxuriant grass, the galaxy of flowers, and the visions of Bethartoli Himal and Nanda Ghunti, clear and glittering in the south. We spent a day scrambling on the lesser peaks near by while we waited for the other seven porters, and next day, after a night of discomfort owing to pouring rain, the porters responded to blandishment and carried well on the marches to Durashi and Dibrugheta. Dibrugheta was, I think, first found by Graham and is one of the gems of creation. Descending, we met Roger Duplat and Louis Payan with Tenzing, my companion on Bandar Punch. We all spent a happy evening together.

We crossed the Rishi by a sturdily constructed bridge built a few days earlier by another Frenchman, Robert Walter, also bound for Trisul. We had several hundred feet of rhododendron scrambling and came to realize to the full that those exquisite and delicate blooms conceal tangles of gnarled branches, truly devilish to force a way through. When we emerged, on a high vantage point above the Trisul nala, we had a splendid view of the upper Rishi gorge and of the eastern face of Nanda Devi.

We were now in austere country, but nevertheless we found a delectable site about 15,000 feet, at a spot called Tridang on the survey map. The poetically minded Nalini Jayal writes: 'The grass on which we camped was like a cushion, sprinkled with tiny mauve primula {minimissima) and the gentle lapping of the water brought to mind the Beethoven Pastoral Symphony. Indeed, the serene atmosphere with the snowy Devistan peaks overlooking us from the east, the deep blue sky and the brilliant moon in the clear mountain air gave us probably the keenest joy of our expedition.'

While the five porters we had kept with us went down to Long- staff's 'Juniper Camp', Gurdial Singh and I went up with loads to find a site for Camp I which we established at about 17,800 feet, opposite an ice-fall at the upper limit of bare rock, and occupied next day, 21st June. The local porters, having no boots, were only able to carry to a point some 400 feet lower down. Gurdial Singh, Dawa, Gyalgen, and I went up another 500 feet to dump tents and food for Camp II. In Camp I that evening appetites began to flag and Nalini and Surendra were suffering from severe headaches. On the 22nd, in brilliant weather, Gurdial Singh and I, with our two Sherpas, climbed to about 19,500 feet. This was in a westerly direction towards the summit of the north ridge. The summit itself was not yet visible and at about noon mist came down and compelled camping,

The morning of the 3rd June dawned clear but with a cold wind and we could not leave until 8.45. Luckily the wind dropped soon after we left camp we began with an oblique traverse across the north- north-east ridge but soon altered our course to one parallel with the north ridge. At 600 feet above camp we roped on account of crevasses but the slope was consistently easy on fairly hard snow. It was a grand day. Nanda Devi displayed her double-turreted splendour and to the north the triangle peak of Kamet stood out clear. We plodded on slowly up the seemingly endless slope. At midday little wisps of mist began to appear in the valleys, gradually rising to mingle and form a cloud-sea. A short halt for food and a look around—Nilkanta thrust her spire upwards to the east of the three pinnacles of otherwise level Ghaukhamba—next to the right came Dunagiri and Ghangabang merging with Kalanka. The Nanda Devi west peak and the connecting arete were very clearly defined, and we wondered how the French were faring on their daring venture. Farther east was the Devistan ridge (western wall of the Sanctuary) with Nanda Kot.


The climbers were tiring. Dewa alone strode on, determined to reach the top. We followed slowly and painfully. Gyalgen's headache got worse and he could go no farther, but the summit was close at hand and, as he had ample clothing, it was quite safe to leave him for the short time we needed. We actually reached the summit at 4.20. Though the hour was late we were loath to leave the indescribably beautiful view—no words are adequate to tell of these peaks of Garhwal, of Nepal, and of Tibet, rising like islands out of the 22,000-feet-high sea of cloud.

We reached Camp II at 7 p.m., to be greeted by a superb sunset, worthy of so glorious a day.

Note.-—Roy Greenwood and Gurdial Singh were at the time on the staff of the Indian Military Academy at Dehra Dun. This was the first time that an Indian member of the Himalayan Club had ascended one of the greater Himalayan peaks, and it is to be regretted that we are not able to record his own observations and reactions; but we take this opportunity of congratulating him on a very gallant effort.—Ed. 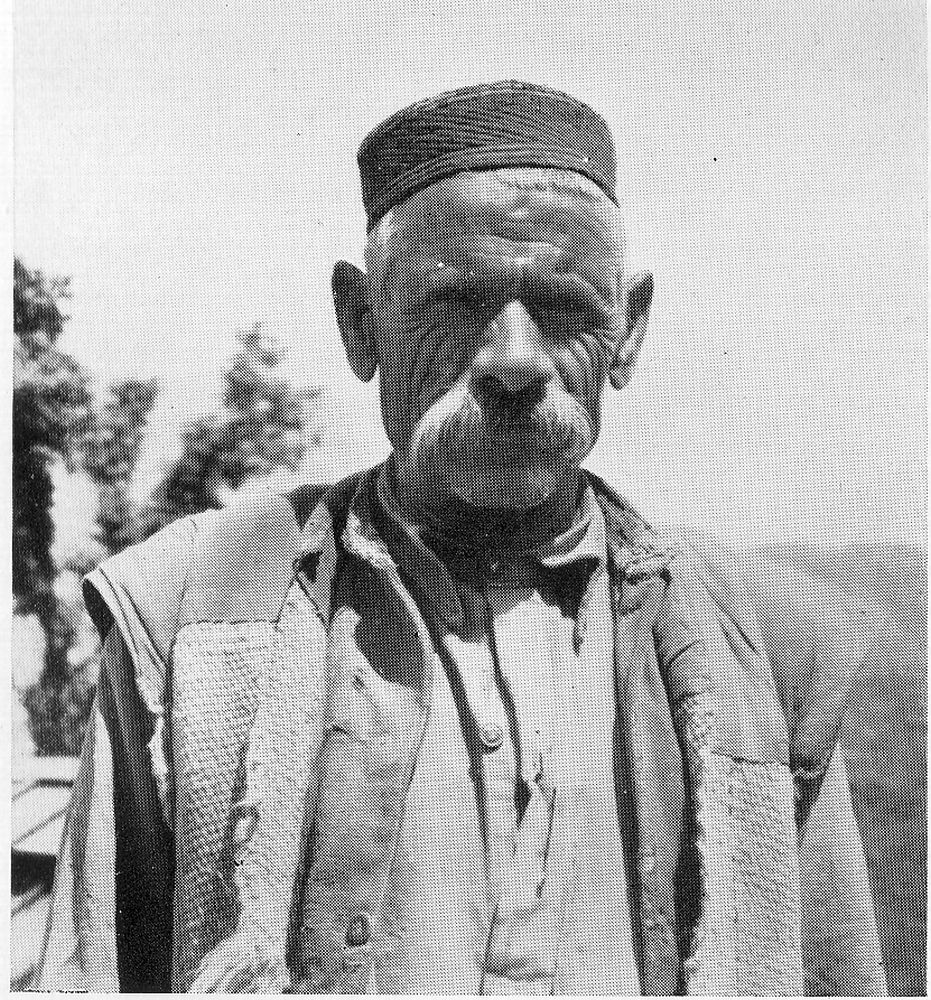 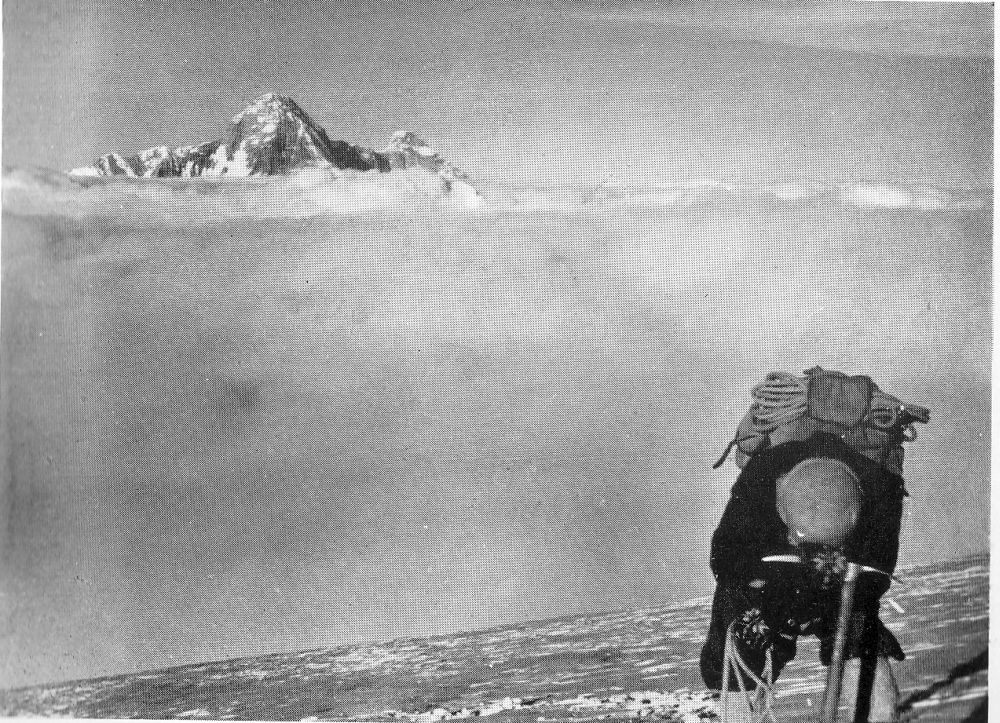 Nanda Devi from summit of Trisul with Dawa Thondup in foreground 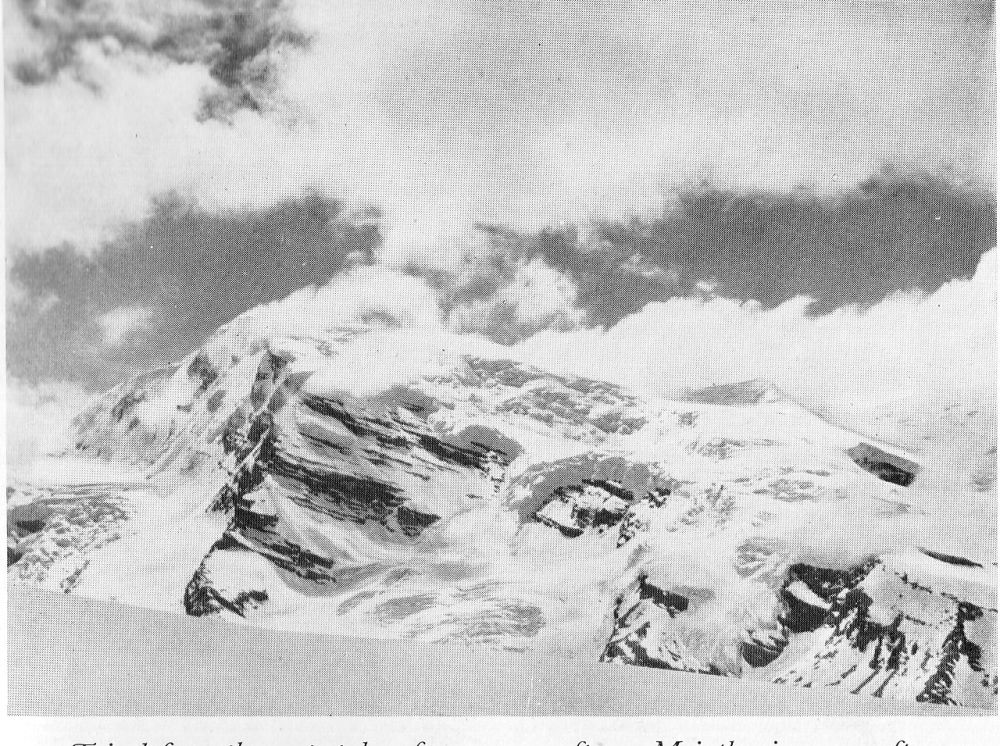 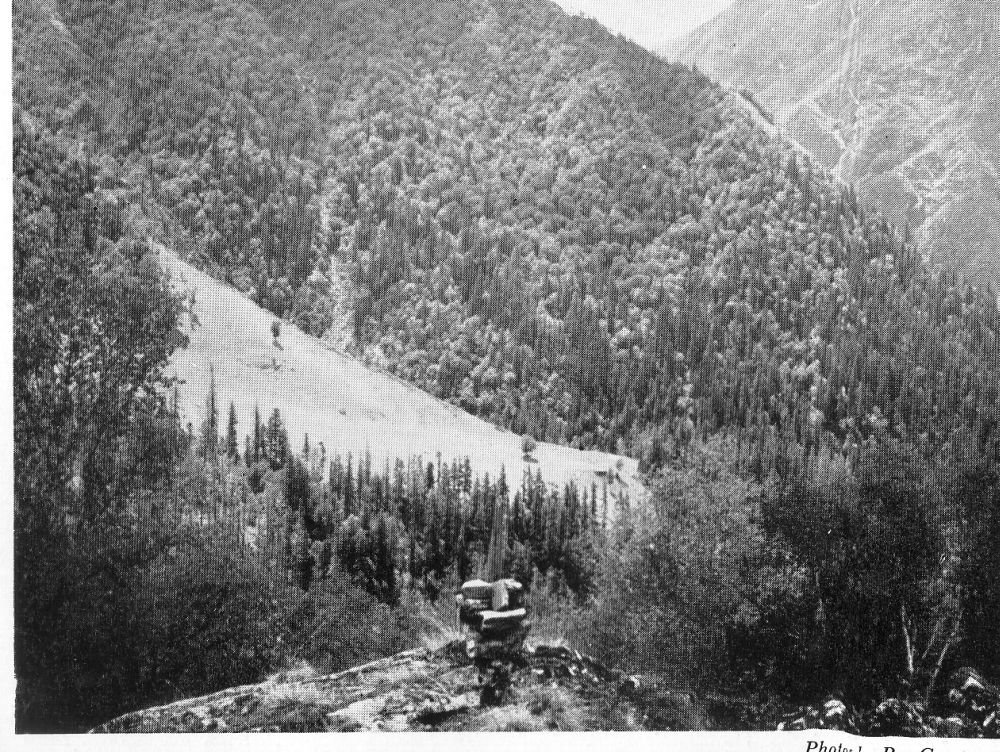 Dibrugheta from the Curtain ridge.