In 1938, when serving as a member of the Ghitral Garrison, I managed to obtain leave for the months of June and July. My objective was to exploie a practicable route for a serious attempt on Tirich Mir, 25,230 feet, to be made the following year. I was unfortunate in that both my intended companions failed me: one to go with the Germans to Nanga Parbat, the other, Greenwood, to be 'frozen' pending possible operations in Waziristan. About the latter I did not hear until I was on Tirich Mir.

June 9th found me in camp on the Owir glacier plateau just above its final ice-fall at 15,500 feet. Between then and 24th I inspected the head of the Owir, crossed on to the South Barum, which I descended, and then ascended some distance up the North Barum glacier. The North Barum was a maze of crevasses and access to the great ridge (background in Fig. 1) looked exceedingly difficult.

On 24th June I camped at the head of the Owir glacier at 18,000 feet and the following day climbed to the ridge between that glacier and the Dirgol. I had with me two Ghitralis, Pinan Jan, who was with Hunt on Istoro Nal a few years previously, and Soufi, lent me by I I.H. the Mehtar. From where I was the south ridge looked hopeful. However, Greenwood had not materialized, and with the support I had I did not feel justified in going on. This route was followed up the following year by the Miles-Smeatons and Orgill to about '2,500 feet, whilst I, alas, was sent back to England on a course.

On descending, I got the news that I would have to do my climbing with Chitrali assistance alone. I therefore decided to cross the Mastuj river to some mountains that had attracted me much, whilst on Tiric h Mir (Fig. 2). They looked easier and smaller. The central Pyramid, Buni Zom, 21,494 feet (Fig. 3), still remains unclimbed, although the following year the Ghitral Scouts officers attempted it. The difficulty is a tough ice wall something over 2,000 feet high. They were forced away from the main peak by the ice but, I believe, one of them 1 succeeded in scaling an outlying peak. The other, Edelman, feeling ill, turned back and fell 600 feet to the glacier. He survived the fall to die fighting at Keren in Eritrea.

A first reeonnaisance of Buni Zom from the west, following the valley that leads up from Reshun, showed that I would have to cross the Phargam An and try from the east. However, toothache, which had been threatening for some time, forced a return to Chitral for doctors attention, leaving my coolies with the gear at the foot of the Phargam. In hurrying to return before the coolies and gear disappeared, I did not apparently allow enough time for the drugs administered by the doctors and alcohol administered by myself to work out of my system. When I came to cross the Phargam, I was in very poor shape. 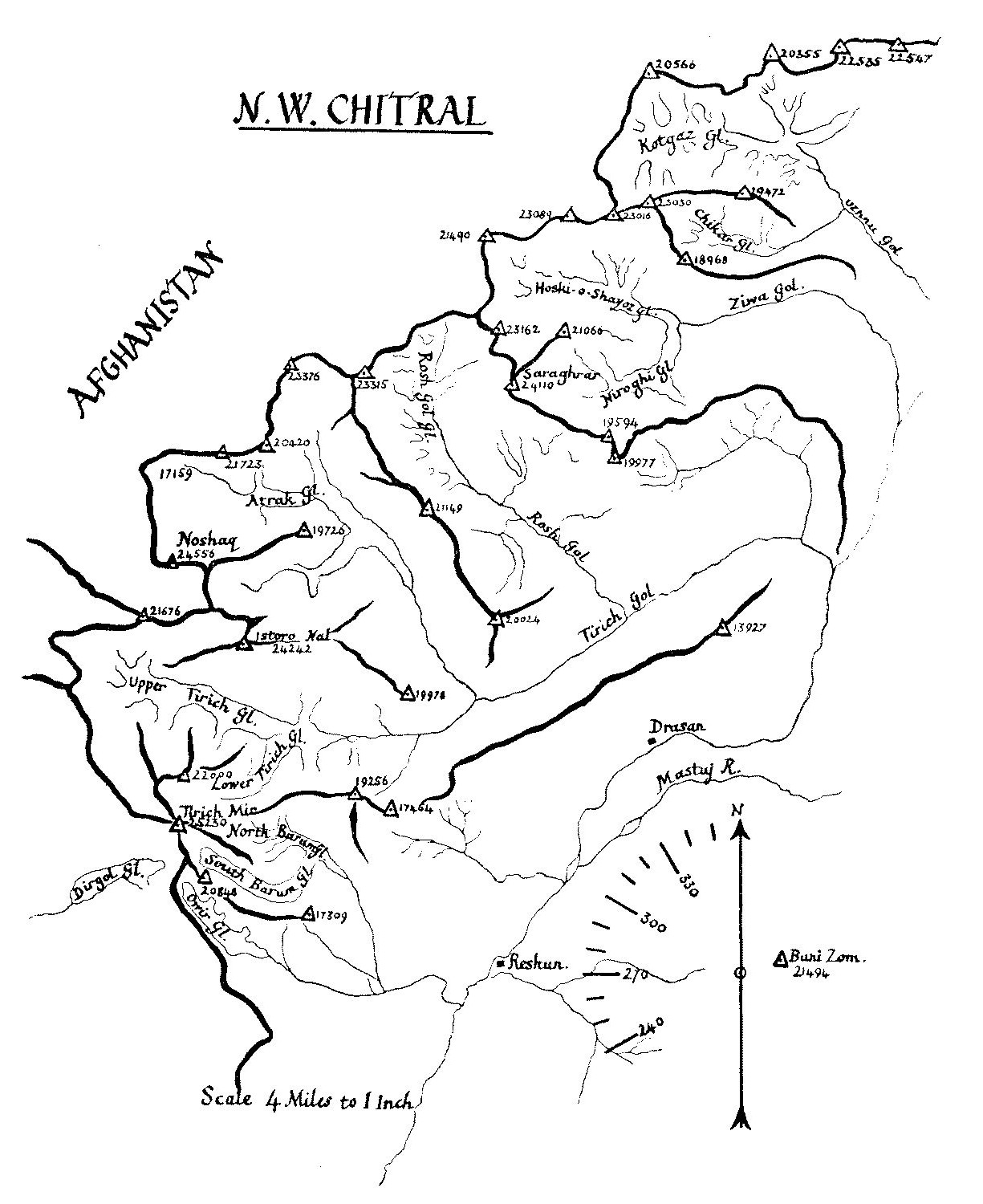 On 13th July I was camped at the head of the Khorabohrt glacier at about 18,500 feet, and the following day made a weak attempt at the ice wall. Not feeling strong enough to persevere I turned my attention to photography and managed to get the panorama reproduced here. There are some points about this panorama which require mention. 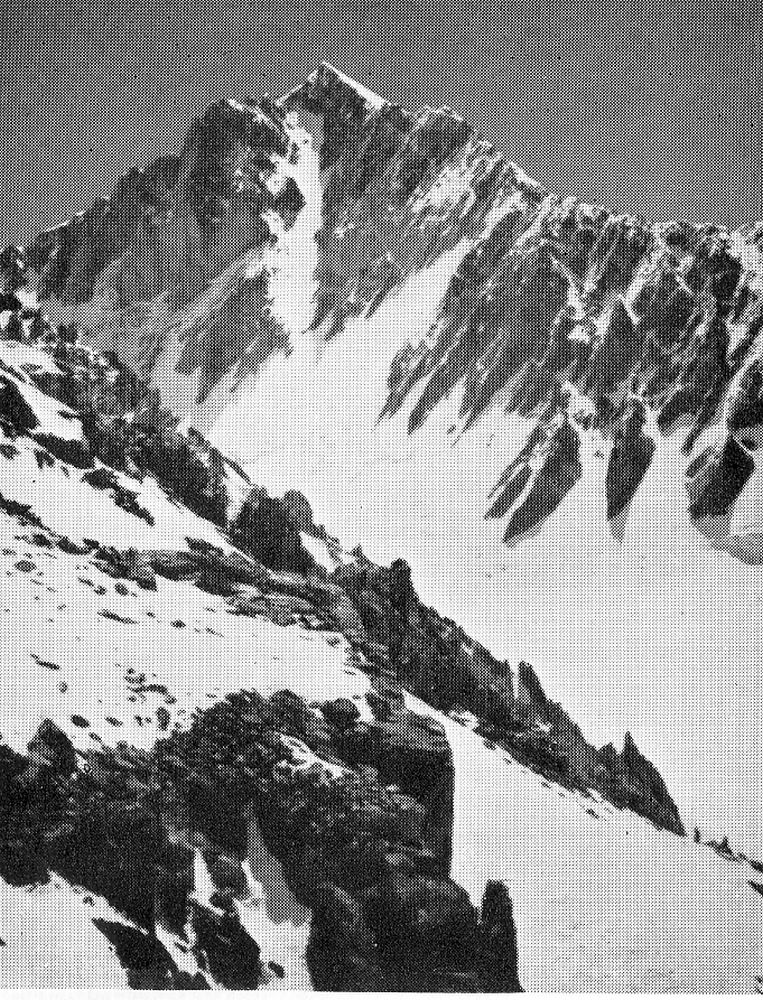 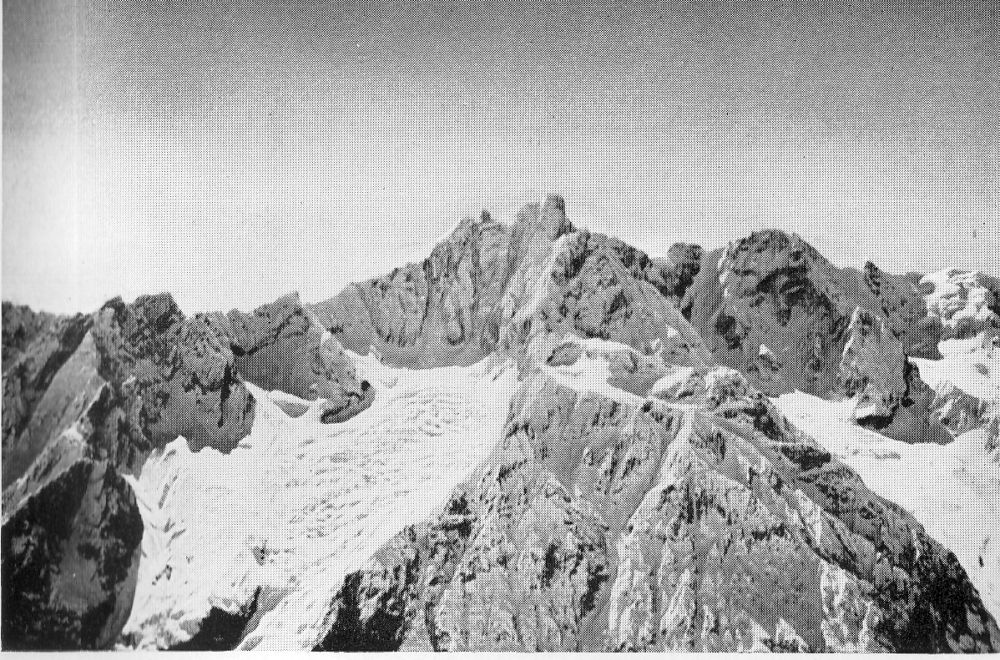 I have sketched out a map of the area that it covers and also a key. Only the southern end of this region is well known. There is one peak of over 25,000 feet, Tirich Mir, climbed in 1950 by the Norwegians. There are three peaks of over 24,000 feet, only one of which, Istoro Nal, has been attempted, and there are six peaks of over 23,000 feet, none of which have been looked at except by the Survey of India. Here is a vast area deserving in every way the attention of climbers when the political instabilities of our time do not prevent it. I am of the opinion that during June and July the area enjoys settled weather conditions unique among mountains of such altitude. In two months I only had to weather out two storms and I think my experience tallies with that of others who have been there.

Saraghrar I have not been able to fix with certainty. It lies either behind the low peak on the map bearing or is the pointed peak to the south of this bearing.

The peak showing to the south of Tirich Mir, above the head of the Owir glacier and obviously well inside Afghanistan, I have failed to identify. From the maps I have seen there is nothing approaching its apparent altitude in that area. From comparisons between the height from which I took the photographs and known heights on Tirich Mir I would place it at something over 22,000 feet.

Apart from the high snows there is any amount of good rock climbing, on peaks such as Pushkari, 19,000 feet, at the head of the Madaglasht valley, south-east from Buni Zom. It is shown in the photograph in its winter covering of snow. It stands above where the Garrison Ski Hut and Summer Camp used to be. From all directions it looks a first-class proposition with no obvious easy line.

Before returning to duty I started a reconnaissance of this peak with another officer of the garrison. This was brought to an abrupt end by Pinan Jan and another coolie falling down a slope of old snow and sustaining some bad cuts.