THE FRENCH ON NANDA DEVI

This tragic story has been pieced together, with the co-operation of the French Alpine Club, from whom we received the beautiful illustrated brochure produced by two of the survivors, MM. Languepin and Payan, and relevant publications of Alpinisme and La Montagne.—Ed.

The Expedition was organized by the Section Lyonnaise of the C.A.F. under the command of Roger Duplat: their President, M. J. Montel, has written: 'A team must have one soul, and the soul of this team was Roger Duplat, a leader of invincible will.' The rest of the party consisted of Louis Gevril, second-in-command, Alain Barbezat, Louis Dubost, Paul Gendre, Jean-Jacques Languepin, Louis Payan, and Gilbert Vignes.

Their first intention was to acquire what few French climbers have had the chance of possessing—Himalayan experience. But the main object was to find out whether, with modern technique and improved equipment, it would be possible to adopt in the High Himalaya the more Alpine practice of varying routes on peaks already conquered, and of making traverses between adjacent peaks at high altitude. The actual project was to attempt the traverse of the formidable arete, three kilometres in length, which links the east and west summits of Nanda Devi. Louis Payan writes that it was 'undoubtedly an audacious and perhaps rash plan. The technical difficulties of the arete, nowhere less than 23,000 feet in height, that "awe-inspiring rampart of rock and ice", would rule out all possibility of retreat and would leave for those who attempted it no alternative to victory: they would have to overcome, unaided, each difficulty as it arose, and their wills must be proof against intense cold, exhaustion, and the numbness of mind and body which would lie in wait for them. Such, then, was the wonderful project!'

With the Sherpas Tenzing (Sirdar, as later with the Swiss on Everest), Dawa Norbhu, Sarke, Da Namgyal, Gyaljen, and Panzi, they reached Chamoli on 27th May, and after overcoming the usual transport difficulties got to the 1936 Base Camp three weeks later.

The plan was simple: first the ascent of Nanda Devi West by its southern spur; then the traverse of the arete linking up with Nanda Devi East and the descent of the south-east spur to Longstaff's col.

Camps I, II, and III were installed near the same sites as in 1936 and three tents were taken up to Col Longs taff in readiness for the party who would go up to meet Duplat and Vignes, the chosen pair for the arduous traverse. By 26th June all was prepared, the weather was perfect though almost too hot, and next day Duplat and Vignes with two Sherpas ascended to Camp II. On 28th June they passed through Camp III and pitched their bivouac at Camp IV above the slab pitch over the camp at about 23,700 ft. On 29th June they sent down the two Sherpas with a scribbled message: 'Expect to be on summit by noon—bivouac below eastern summit—sleep at Col Longs taff. From our camp above the slab pitch we send down Ang Dawa and Norbhu, both ill. Succour them, please. Clear camps down to Camp I the day after tomorrow. Bring back everything. I want Tilman's rope. Gil and I are suffering from severe headaches but otherwise all goes well. Camp env. 7,500. Roger.' 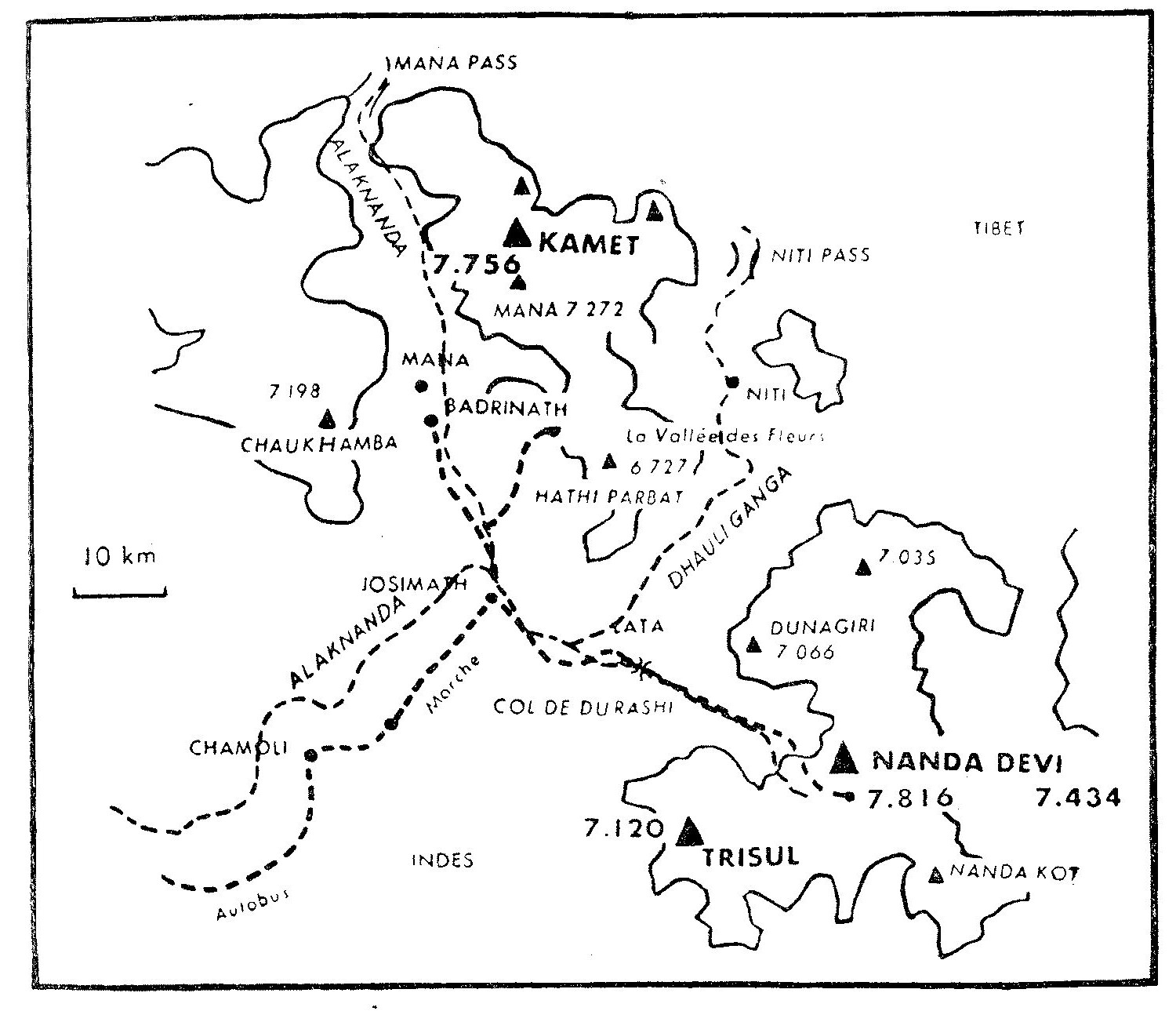 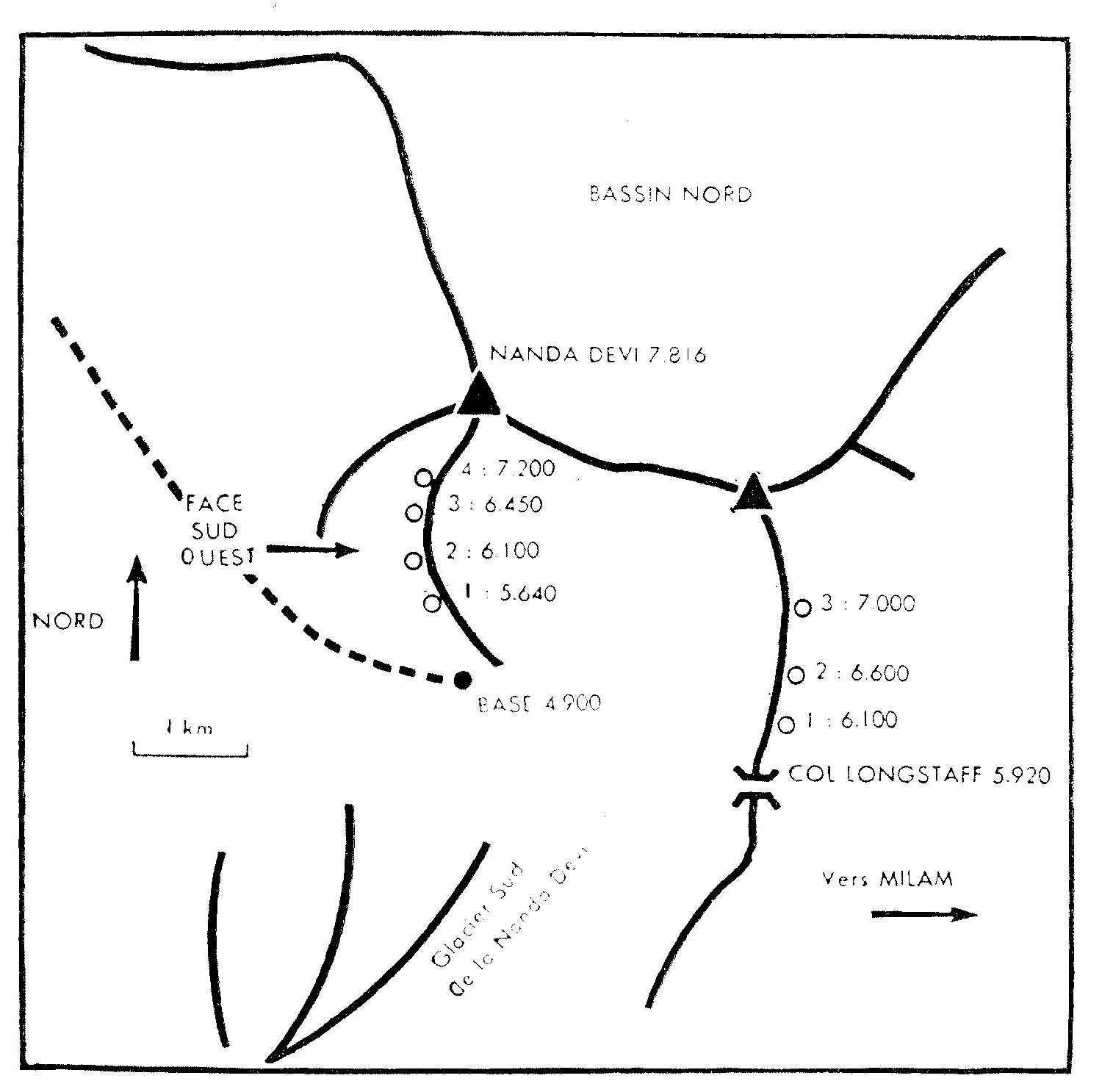 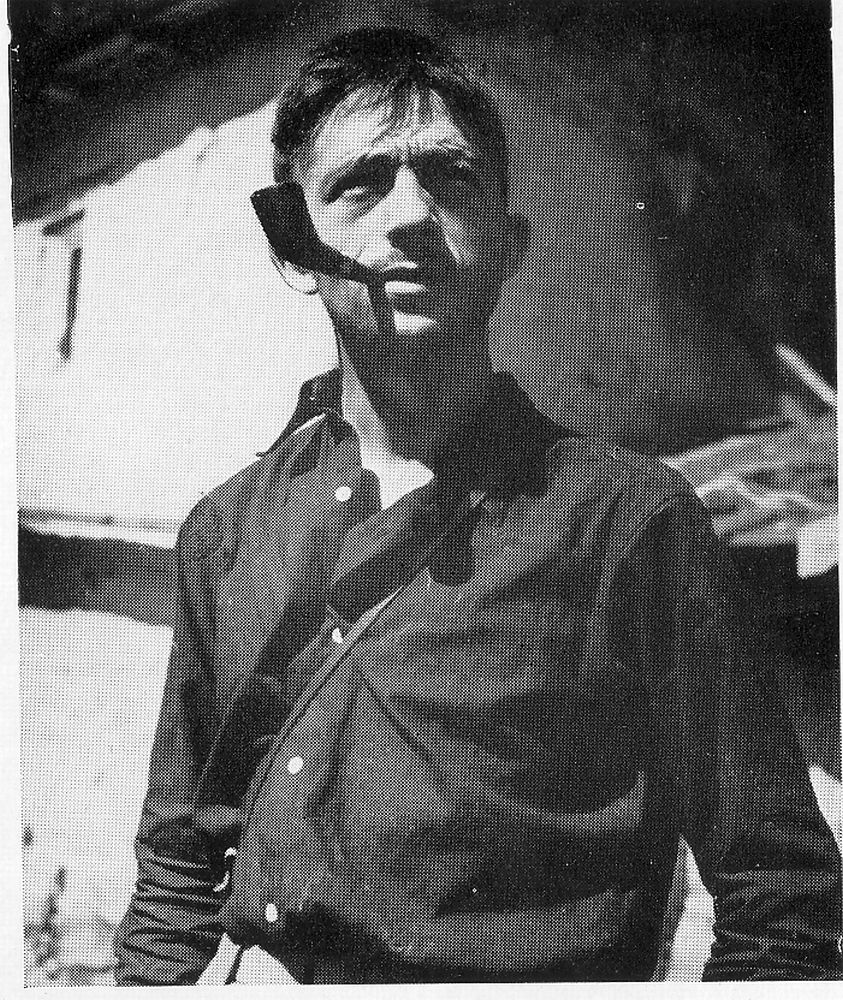 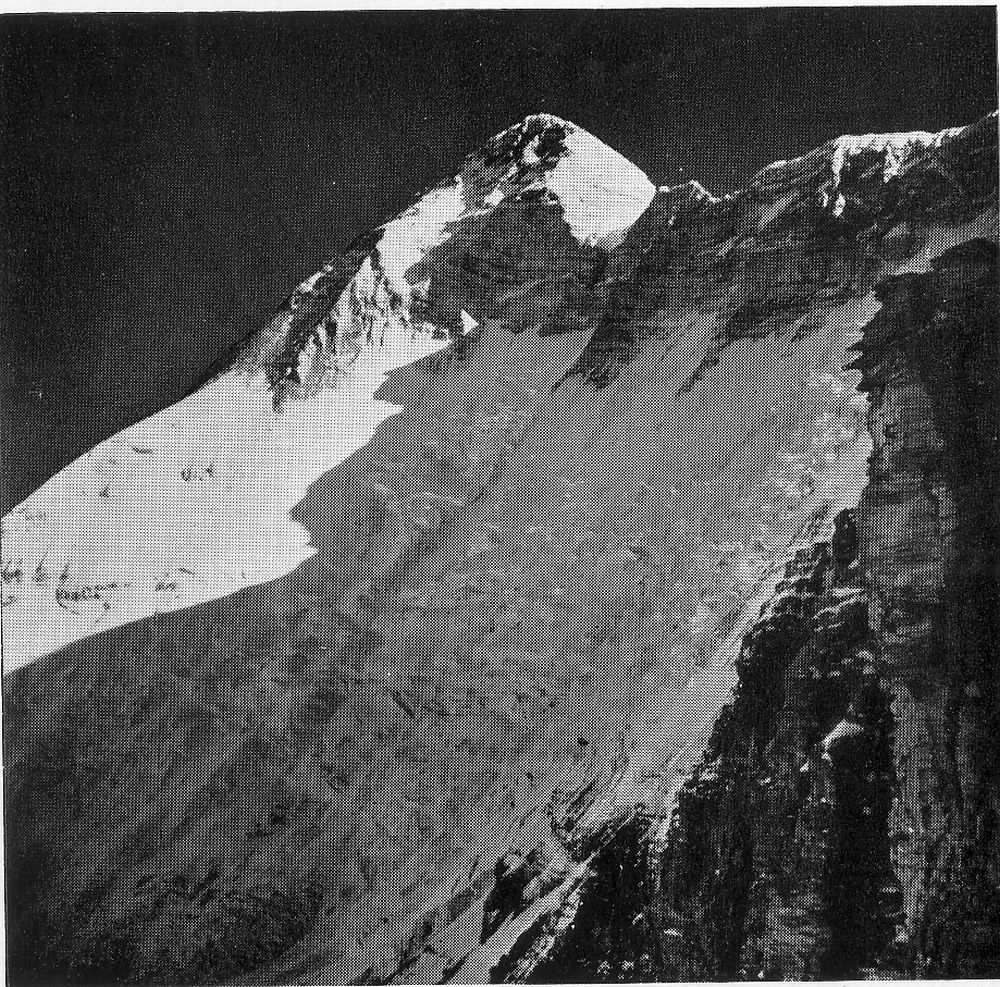 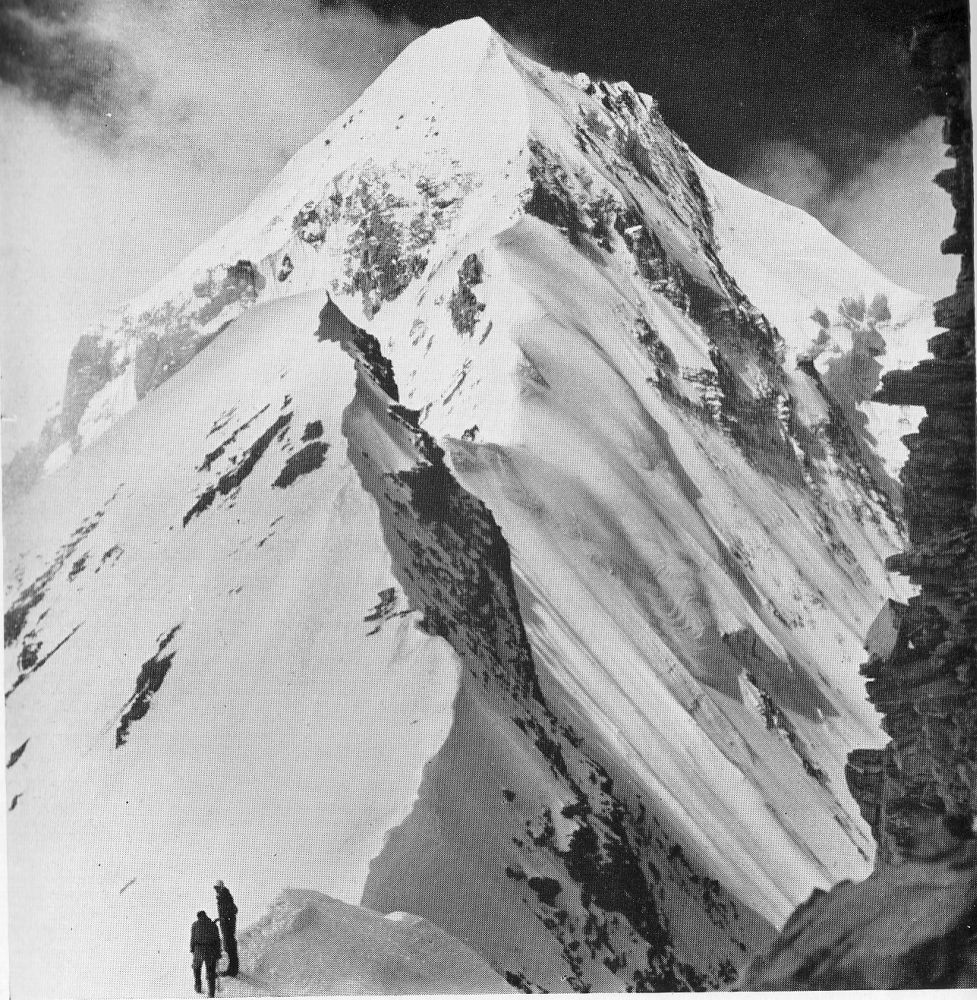 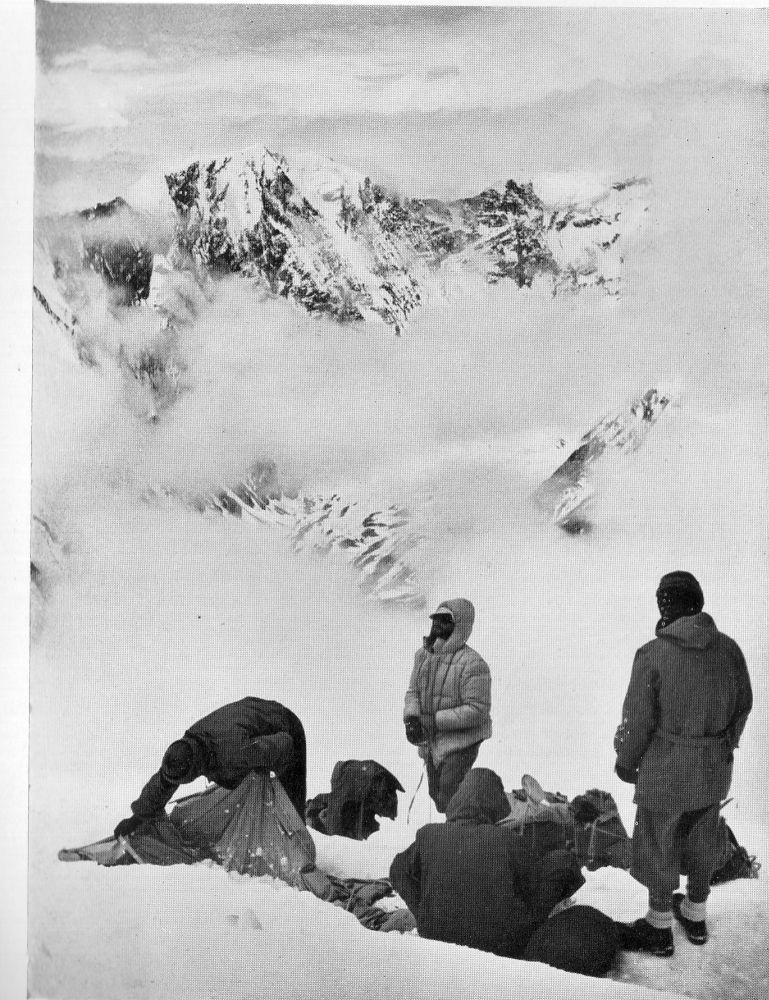 They moved up rapidly from the bivouac over ground easy for such as they, unroped and not wearing crampons. They were last seen from Camp III at about 2 p.m. still moving towards the summit. Then the mist enshrouded them.

On 30th June Louis Gevril, second-in-command, climbed to the bivouac site (Camp IV) and searched the long arete, but could see no trace of them. In the afternoon there was a sharp snowstorm but next morning it was fine again. Meanwhile the camp at Col Long- staff had been installed according to plan and on 2nd July Louis Dubost and Tenzing followed the route taken by the Poles, Bujak and Klarner, and found some pieces of rope and some rusty pitoris. At Camp II they got a message from below expressing anxiety at the absence of news. They went on, continually examining the long arete with their glasses, and on 6th July, both utterly exhausted, reached the summit. Both had frostbitten toes. Tenzing had surpassed himself on the climb. The wind on the summit was so fierce that they were forced to descend some distance before they could use their glasses. They hoped, not seeing any sign of the other two, that they had got back to safety, and they descended to rejoin Payan at Camp II, reaching Col Longstaff on 8th July and going on to Base Camp the same afternoon. But by now, nine days after their disappearance, there was no longer any possibility of Duplat and Vignes being alive. Gevril's theory is that his comrades met their death when a cornice broke off and carried them down to destruction. He himself came close to death when making a gallant attempt to cross the Rishi in the forlorn hope of examining the north face, for the torrents were in full flood and it was useless and dangerous to remain longer at the Base Camp. He was rescued through the brave efforts of Sherpas and of coolies.