RECENTLY, EVEREST has been the scene for any number of 'climbing spectaculars'. In 1988 mountaineers from several countries attempted several unusual firsts. The goal of our 4 man climbing team was simple in theory, difficult in practice, to climb a new route up the forbiding Kangshung Face, without benefit of Sherpas or bottled oxygen. Both Robert Anderson, our expedition leader, and I had been to Everest before. In 1985 we had attempted the West Ridge direct from Nepal, a year later I had reached the North Col. After obtaining permission for the climb from the CMA in Beijing, we speculated what chances we had to climb this feared and dangerous face, the most remote and little-known side of Everest. It would be, we anticipated, the climb of our lives.

In Colorado, we met at George Lowe's house, the lead climber of the American first ascent of the Kangshung Face. After expeditions to the face in 1981 and 1983, the second effort finally triumphed, using rocket launchers and a motorized winch to haul loads. Six climbers summitted, all using oxygen. Looking at George's photographs, I noticed a smaller, unclimbed buttress on the far left side of the Kangshung. Above the bottom, thousand meter buttress, crevassed but moderate angled snow slopes led directly to the South Col — up the flip side of the Lhotse Face in the Western Cwm. Although the danger from avalanche and icefall looked high, could this possible new route be climbed in a simpler way, we Wondered?

We organized a four man team. Robert Anderson and I from the USA, Paul Teare from Canada, and Stephen Venables from England. Norbu Tenzing, the eldest son of Tenzing Norgay, organized our logistics; Lord John Hunt, leader of the 1953 British expedition, was our honorary expedition leader; Miriam Zieman and Joe Mark Blackburn, both from New York, came as expedition doctor and photographer. Our Sherpa Sirdar, Pasang Norbu from Namche Bazar, cooked at base camp; his cookboy, Kasang Tsering, was a young Tibetan from Kharta. The seven man, one woman '35th Anniversary Mount Everest Expedition' was ready.

After a month of delays due to late winter snowstorms and problems with our porters, we finally crossed the snowy Langma la pass at 5500 m, entered the beautiful, verdant Kama valley, and established base camp on 29 March on the north bench of the Kangshung glacier. Two days later, a mile from the face, advanced base camp was also fully stocked. Our 3 week approach from. Kharta, while slow, had fully acclimatized us. We began the climbing up our buttress on 3 April.

The climb was perfectly designed for our small team. The first 1000 m climbing was difficult and technical, and followed a surprisingly natural route. After crossing some snow terraces, Stephen led a 5.8 rock headwall. Higher, we came to the Scottish Gully, a lovely 45 degree snow-gully. Finally, a long traverse on mixed ground brought us to several difficult pitches of water-ice climbing, near-vertical, even overhanging. In 800 m, we ascended the left side of a huge avalanche gully separating our buttress from the larger American Buttress. On 14 April, we established Cl at 6550 m on a small snow-terrace amidst huge seracs near the crest of our buttress.

We alternated our days of climbing. One pair rested at ABC while the other two climbers extended the route. Sometimes all four of us would haul loads together. We were pleasantly surprised how rapidly we had climbed the buttress. In mid April, we cautiously overcame a 15 m wide by 30 m deep crevasse splitting the entire upper ridge. On 16 April, Robert and I rapelled into the crevasse, searching for a way to gain the moderate snow slopes on the far side.

Inside, jammed between the two glassy walls 10 m above the floor was an immense chockstone. Belayed by Robert I walked towards it, and started to hammer in a Stubai ice-piton for protection. Suddenly, in a terrifying blast, the chockstone exploded and collapsed into the crevasse beside me. I ran to Robert's belay ten metres away as tons of jagged ice-blocks crashed down only 2 m from where I had been standing moments before. It was a very close call.

Now there was only one escape. That afternoon I aid-climbed up the 30 m far wall of the crevasse on ice-pitons and snow-stakes. Next we rigged several ropes over the crevasse to form a Tyrolean traverse, all this at 6860 m! On 1 May we gained the upper snow-slopes, and made a long, tiring climb through knee deep snow to C2 located under a large bergschrund at 7470 m. We carried loads there in seven hours, mostly in a white-out. With C2 ready, we cculd head for the South Col and the summit. After a dozen trips up and down the buttress and 6 weeks spent acclimatizing, we might have been the best acclimatized team to try a 'fair means' ascent of Everest.

A snowstorm on 3 May brought an abrupt halt to our first summit attempt. Retreating in deep snow from Cl to ABC we jealously saw several members of the 7 million dollar, 300 member Japanese/ Chinese/Nepalese Friendship TV Expedition reach the top on 5 May in perfect, cloudless weather. Their first-ever Nepal-Tibet traverse of the mountain, and the live television broadcast from the summit was later hailed as 'the most historic feat in the history of mountaineering'. 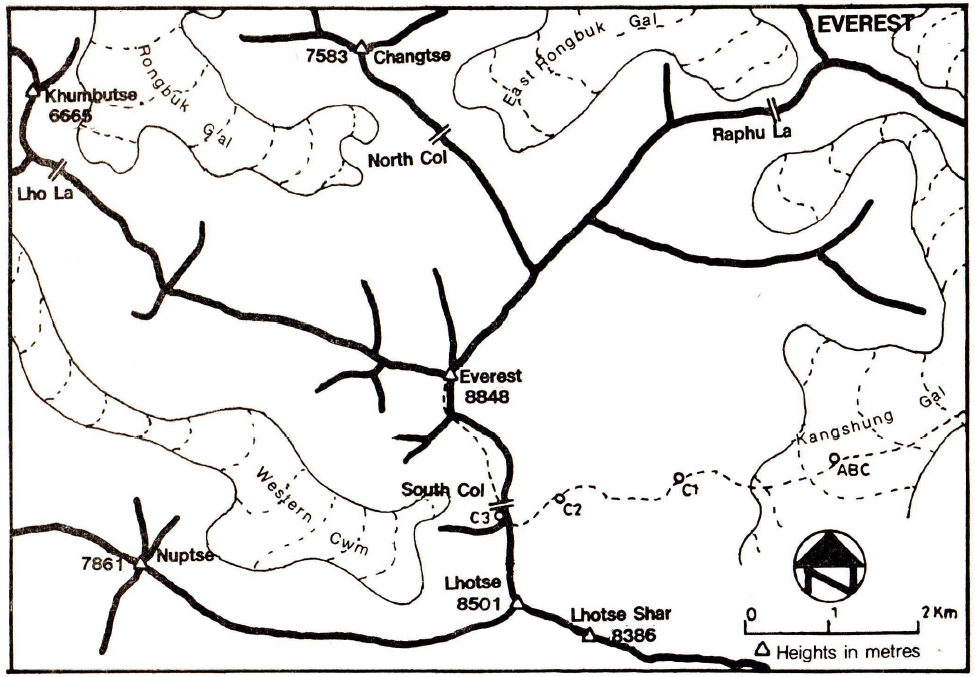 We finally left our ABC on & May; we hoped for the top. After a routine ascent to Cl, we continued to C2 the next day. Again in bad weather, the twelve hour haul through waist-deep, fresh powder snow to C2 was exhausting.

A half moon hung over the beautiful west faces of Chomo Lonzo and Makalu the next morning. It was a picture-perfect day, clear, calm, and sunny, the kind of day mountaineers dream of. There was even some neve snow. We skirted the right end of a huge bergschrund, 'The Flying Wing', then diagonalled left into the large upper basin below the South Col. Alternating the job of trail-breaking, it was my luck to lead the final 100 m to the South Col, something I will never forget. The snow slope steepened as I approached the rim; plunging my ice axe in, I hauled myself over the edge.

The scene before me was the most desolate I have ever seen — a sub-zero wasteland of snow, ice, rock — and mostly wind. Gusts of 150 km per hour tore at our clothing and faces until we set up two small Bibler tents. In case the winds increased, we stacked rocks in the corners of each tent and anchored them with 7 mm rope to two boulders.

After a bad night's sleep, Paul was sick and had to descend. Probably he was getting cerebral oedema. Before we could decide who would accompany him back down, Paul crouched at the door of our tent, wished us luck in reaching the summit the next day, and left alone to descend to ABC.

Luckily the wind diminished, and at 11 p.m. on 11 May, Robert, Stephen and I left for the summit. We climbed unroped and without packs to save weight. By sunrise we had reached 8380 m and a tent left by the TV expedition a week earlier. I stopped for a few minutes to take pictures of the sunrise on Lhotse and Makalu. Taking off my outer mittens, I took a series of pictures wearing only my inside liner gloves. My fingers froze almost instantly, touching the cold metal of the camera, but I hoped my hands would warm back up as we continued to climb.

In the early afternoon we climbed up the snow slopes leading to the South Summit as the weather began to worsen. I continued to take pictures, and my fingers never re-warmed. Stephen remained in the lead; I came second, Robert was last. As Stephen disappeared over the South Summit, I began to hallucinate and later to pass out from the lack of oxygen. I was losing my grasp on reality. We were unroped. If I continued onto the Hillary Step and the final ridge, and if I fell asleep, I began to realize I would probably be killed.

I turned around, meeting Robert briefly. He also turned back at the South Summit. We had no idea if Stephen was dead or alive, if he had made the top or not. Robert and I descended to the Japanese tent, reaching it at dusk. We huddled next to each other, then at sunrise Stephen stumbled down to greet us. He had reached the top, alone, at 3.30 p.m.j 12 May, the first British climber to scale Everest without oxygen.

We were so exhausted we slept the rest of the day at the South Col, our third full day above 8000 m without oxygen. The next morning, 13 May, we could barely move. It rapidly became the fight of our lives to descend our route. For three and a half days, we struggled down avalanche-prone waist-deep snow in a white out, and with no food, waiting for death. We thought about the brave souls who had perished on K2 in 1986. I became angry that we all might die, too. I told Stephen he wouldn't become famous unless he got down alive.

Frostbitten, weak from lack of food, exhausted, we rapelled down the bottom buttress during the night of 16/17 May. At 4 a.m. we stumbled into our ABC. Our doctor, Mimi Zeiman, who previously had had so little to do, now worked tirelessly. We had survived the climb by a near-miracle, by finding the common will to live. Leaving base camp on 23 May, Stephen and I were carried with frozen feet on stretchers for four days most of the way to Kharta. Three weeks after the climb ended, I reached a hospital in America.

Stephen, Robert, and I each lost parts of several toes. Because of my photography, I have also lost several fingertips. We know now what is it like to have fought for the gift of life at the edge of death, and to have won. We feel privileged to have successfully climbed a new route up the highest mountain on earth. The South Col direct up the Kangshung Face was both a beautiful and dangerous climb. We have been asked repeatedly, didn't we pay a terribly high price for our climb? We did. But our ascent of the Kangshung was, for the four of us, the adventure of a lifetime. As Stephen Venables recently wrote, everyone is entitled do something completely mad once. The trick is getting away with it. We were lucky.

Members: Robert Anderson (leader) age 30 (USA) lives in Auckland, New Zealand. In 1985 he reached 8590 m on Everest's West Ridge with oxygen. Stephen Venables, age 34, (UK) lives in London, England. A veteran of a dozen Himalayan expeditions, he nearly reached the summit of Shisha Pangma in 1987. Paul Teare, age 28 (Canada) lives in Lake Tahoe, California. In 1986 he made a 4 man ascent of Kangtega via a difficult new route. Ed Webster, age 32, (USA) lives in Boulder, Colorado. He had participated on two previous Everest expeditions, reaching 7470 m on the West Ridge in 1985 and the North Col in 1986. 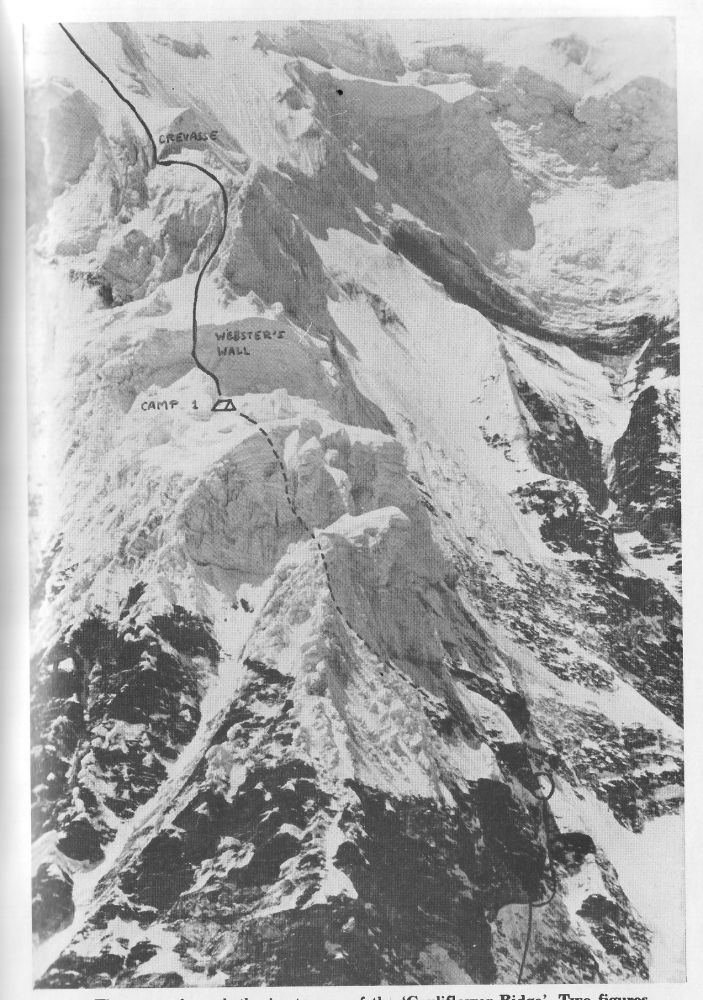 The route through the ice towers of the ‘Cauliflower Ridge’. Two figures circled (The dotted section is hidden) Article 4 (S. Venables)