RIMO I (7385 m) IS LOCATED in the Eastern Karakoram very close to Siachen glacier. The famous Karakoram Pass and Daulat Beg Oldi (DBO) on the historic trade route, are just 28 km and 32 km away respectively from Rimo I in the east as the crow-flies.

The rugged, barren, remote and inaccessible mountains of Eastern Karakoram have become the centre of attraction; both for Indian as well as foreign mountaineers ever since these peaks have been opened for the foreign expeditions by the Government of India in 1984. The galaxy of peaks in the Eastern Karakoram, most of them unnamed and unclimbed, are likely to become destinations of many future climbers. Climbing a mountain in the Eastern Karakoram has its own fascination. Today in the mountaineering world there is a hunt for the virgin and challenging peaks since almost all the giant Himalayan peaks have not only been climbed but climbed through different faces and routes. Surely this is the era of climbing high mountains through difficult and uncharted routes. The more challenging, difficult, dangerous and inaccessible the peak the more attractive it becomes. Rimo I was one such formidable peak until 28 July, 1988. It had remained unclimbed despite two previous attempts. In 1985, an Indo-British Expedition led by Harish Kapadia had been able to reach up to 6850 m through the southwest ridge. The attempt had been abandoned when Stephen Venables unfortunately dropped his rucksack from the mountain. In 1986, an Indo-Australian Expedition led by Col Prem Chand attempted this peak from the eastern approach. This expedition also could not succeed in reaching the summit. The challenge posed by Rimo I created a thrill and fascination among the mountaineering community the world over.

The Indian Mountaineering Foundation (IMF) took the decision to launch a joint Indo-Japanese Expedition to climb Rimo I in 1988, in collaboration with the Himalayan Association of Japan. The team comprised 18 members - 7 Japanese climbers, 7 Indian climbers plus leader, medical officer, Army liaison officer and a wireless operator. After we assembled at Delhi in June, we formed a well-knit team worthy of Rimo I.

Thc expedition left Delhi for the mountain on 15 June. The i-xpedition reached Leh on 19 June. Three days halt at Leh was ii ciiilly utilised in arranging Nepali porters and also co-ordinating iinivc plan beyond Leh with the Army and the Indo-Tibet Border Police (ITBP). We had no problem about route to be followed uid entry into Nubra valley and beyond Siachen glacier since the approach route to the mountain and time schedule of the expedition had already been finalised with the Army authorities.

The expedition left Leh on 23 June and reached Panamik. Army Commander Lt Gen B. C. Nanda met the team at Panamik on 25 June. He wished us success and assured us all the help. Acute shortage of porters in Nubra valley poses big problem to any expedition in Eastern Karakoram. We were able to solve this problem by enlisting 17 Nepali porters from Leh and 9 local Ladakhi porters to ferry about 150 porter loads in shifts.

On 26 June, we began trekking from Siachen glacier snout (road-head). After climb through the Siachen glacier for about 6 km we took a right turn into Terong valley. The 1st Staging Camp was set up one kilometer inside Terong Topko valley, a nice camp site with lot of mushroom.

Terong Topko which issues from the joint snout of North and South Terong glacier was in furious form. There was no possibility to cross it. Any attempt to ford across could have been fraught with mishap. Our efforts to lay an improvised bridge with the help of aluminium ladders also proved futile. In the bargain we lost 3 precious days. Finally, a few members could go across the river via Siachen glacier and enter into Terong Topko valley from the west of a rocky hill feature. On 1 July, 4 members accordingly reached across the bridge site at 8.00 a.m. by the evening we were able to invent successfully a rope suspension bridge over Terong Topko for pushing men and material safely across the river.

This was indeed an achievement. The rope bridge remained intact and operational during the entire duration of the expedition. This river had also posed big problem to the Indo-British Expedition in 1985.1

After successfully tackling Terong Topko we were able to set up base camp on 4 July at the junction of North and South Terong glacier (4300 m).

By the time we could set up the advance base camp on 8 July at the head of North Terong glacier (5040 m), the weather became hostile. Despite inclement weather our efforts continued and on 9 the leading 4 members - 2 Japanese and 2 Indians, set up Cl (5960 m) at the foot of Rimo I, just below Ibex Col. The route

from ABC to Cl through North Terong glacier was full of crevasses requiring cautious movement.

After setting up Cl on 9 July it was occupied by 4 members - 2 Japanese and 2 Indians on 11 July, while other members of the team ferried loads from base camp to ABC and to Cl along with the porters.

The real climb started from the Cl onwards where every inch of climb was done with the help of fixed rope. The Indo-British team had followed the southwest ridge and the Indo-Australian team the southeast face. We resisted the temptation of following the route taken by the previous expeditions and decided to take an altogether new alignment. We followed the south face negotiating almost steep rock-ice-walls via Ibex Col. Because of a hard climb of some IV-V degree requiring technical skill of the highest order, the progress of climb beyond Cl was very slow. The leading 4 climbers - Y. Ogata, H. Yoshida, N. D. Sherpa and T. Smanla were closely supported by remaining members ferrying foods, climbing and camping gears. During 2 days, we climbed 21-pitches beyond the Cl.

The weather suddenly turned hostile on 13 July with the result the members had to abandon the climbing activities beyond Cl. The weather cleared on 17 July and C2 was set up on the rock face little below the hanging glacier at 6750 m on 19 July. During 4 days, we climbed 16-pitch beyond the highest point on the 13 July. Our further progress was again hampered by hostile weather from 22 to 25 July. We could resume our activities only on 26 July with renewed zeal and vigour. Tackling the wall of hanging glacier at 6900 m took lot of our time and energy. However, finally we were able to negotiate it and set up C3 on the very steep knife-ridge of the southwest ridge on 27 July at 7000 m.

By now we had used 2100 m fixed rope along the rock-ice-wall and the climb beyond Cl covering just about 1000 m had taken us 16 days - 7 of our climbing days.

On the night of 27 July Y. Ogata, H. Yoshida, N. D. Sherpa and T. Smanla, our strongest team, occupied C3, that air-y-perch. Next day was an unusually pleasant and sunny day. Four leading climbers started their day early and hopefully wished to reach the sanctum -- the virgin summit of Kimo I. Beyond C3 only 5 fixed ropes were used. The final climb to the summit meant wading through fresh snow. Exactly at 2.00 p.m., 4 members reached the summit. Their final climb was clearly visible from the advance base camp. They spent one hour on the summit and had breathtaking view of the entire Karakoram mountains. When they were climbing down from the summit, SI Kanhaiya Lai and Rattan Singh also reached the summit directly from Cl. They also spent 20 minutes on the summit. All the six summiters returned safely to Cl. N. Shingo and Y. Futamata reached C3 and spent the night.

On 30 July, Takahashi started for the summit slowly and reached the summit at 12.13 p.m. and safely returned to Cl along with Watanabe.

At the same time, 4 members - Rattan Singh, N. D. Sherpa, Yoshida and Futamata climbed up again to C2 and C3 and wound up both the camps bringing down all the equipments.

On 31 July, all the members reached base camp after winding up all the higher camps including ABC. We reached Siachen glacier snout (roadhead) on 2 August.

Finally, we returned to Delhi on 12 August after putting 12 members on the virgin summit of Rimo I. It had been a unique experience. We could learn a lot from each other not only about the mountaineering techniques but also the finer aspects of human traits as members of the unified team. The hall-mark of the success of our expedition has been the unique team spirit and perfect mutual understanding that the team enjoyed all throughout during our 2 months stay together. Each member of the team displayed the highest sense of commitment and dedication for the cause. Even under difficult situations the attitude of every member always remained positive. 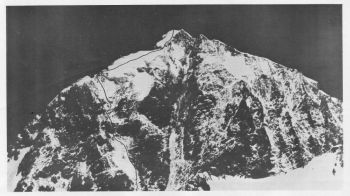 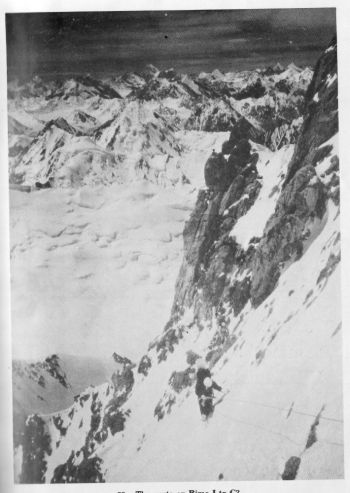 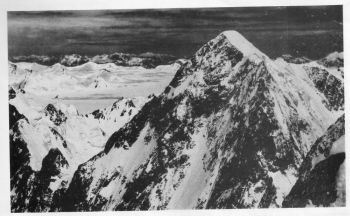 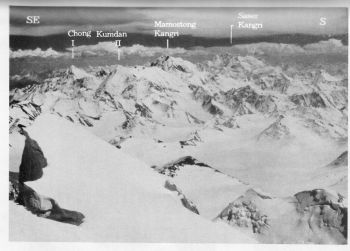 Panorama from summit of Rimo I. Article 14 (Y. Ogata) 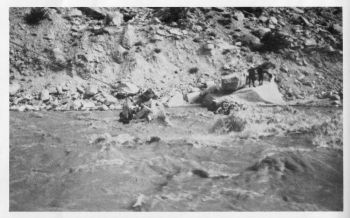 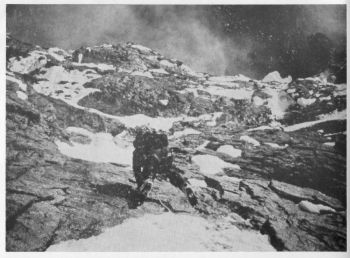 Climbing the rock wall below C2 on Rimo I.