tered in snow, a distance of 3 km in just 15 minutes. Here the three 'Polu' stood somberly side by side with a small hill in the background. A flatish tombstone stood serenely in the white foreground amidst one and a half feet of snow. We dismounted and first went to the grave. We circled around the tombstone, keeping a respectable distance of 3 m, so as not to step on the grave which probably lay beneath the blanket of snow. I went from one side to read the engraved inscription on the tombstone. I could easily make out '1935' and something more written above it. The writing looked familiar and on closer examination the letters read like VISSER which I thought was some code name. In the meantime Tundup noticed some engraving in a rectangular pattern all around the central marking. I asked him to see if he could make out anything, while I had a look at the polu.

Polu in Ladakhi and Balti Language implies 'a shelter made out of mud and stone, for a brief stay.' Out of the three polus, the one in the middle was slightly damaged but the others were intact. I was really struck by the marvel of native engineering, solid construction and ingenuity of the 'Oldi' which I feel I must describe to share my appreciation. It is an igloo shape construction of stone and mud only. The living space inside measures about 2 m in diameter at the base and 2.5 m high. It has one entrance about ,6 m square through which one can comfortably crawl inside and has a circular hole in the roof about .6 m in diameter. In the wall opposite the entrance, there is a fire place for cooking. All holes can be easily blocked and it can be used in the most foul weather to accommodate 4 to 5 people comfortably. The wonder is that despite using only the local mud and stones, it has withstood atleast 75 years of winter storms and summer thaws. I took some photographs in admiration of this masterpiece of native engineering.

On return to the side of 'Oldi' Tundup confirmed his earlier findings which made me more inquisitive. I borrowed some charcoal pieces left by the traders in the polu and rubbed them lightly over the engraving, which became a little more prominent. I could make out that it was not Tibetan, Chinese, Mongolian nor Japanese. By moving my ball point pen in the depression, I excluded Indian and West Asian alphabets. A little more effort confirmed that it was definitely some European language.

I was least equipped to undertake an archaeological investigation. All J had was some pieces of charcoal with which we had blackened some of the engraving, now we required a fine brush to remove charcoal from the depressions, but where to get it, in this area. I looked around and could see only snow, stones, mud and my companions. An idea struck me and I told Tundup to get some horse hair to improvised. brush. We had no razor or scissors nor could we pull the horse hair. We cut some hair from the mane with stones and a brush was improvised. We removed some charcoal from the rectangle and could read the word 'EXPEDITION'. Our joy was boundless as if we had hit a gold mint1. But I am one of those sceptics who gets cautious at unex-pecled good luck instead of being jubilant.

I looked at my watch and it was 1.20 p.m. After a few minutes of thinking I decided to pursue my discovery instead of returning I., my Headquarters 27 km away. We sent a messenger to the DIM) camp to get a few essential items and some eatables while we continued with our efforts. Very soon 'KARAKORAM' at the top centre- and 'NETHERLANDS' at the top left became readable. On the right side of the rectangle we could make out, some more English letters, which read like 'MAKRAM - SERVANTS'. At the bottom of the rectangle there were two lines of engraving. Wp could not make out what was written in the upper line but With some effort the lower line read as 731 ADAKHI PORT; with more effort, the word 'PORT' became 'PORTERS'. Suddenly a gtrenk of wisdom struck me and the whole line became 73 LADAKI PORTERS. We were beginning to get a little rest-N with the other lines at the bottom and on the left. I have never been very good at the game of word building but how could I give up when the puzzle was nearly solved. In order to overcome the restlessness, I decided to change our approach of investigation. We mixed some mud with snow on a black stone Mini allowed the sun, with its feeble heat, turn it into mud paint. We hoped that the mud would stand out prominently on the charcoal background. The words in the centre of the rectangle were made prominent by rubbing some charcoal into them. They could be read as 'VISSER 1935' now we guessed it to be the name and year of the expedition. After that we started putting the wet mud paint in the smaller letters which were in the rectangular layout. Suddenly we saw a horseman galloping in our direction. It was the most welcomed break. We started afresh with renewed vigour

And could concentrate better with some food in our stomach.

The second line at the bottom appeared to be a jumble of some names which read like HOOFT DRRWYSS FA PETERKHAN AFRAZGHUL. Then we started with the left side of the rectan|le and laboriously the words came up as DR PC VISSER L VISSER. My first guess was that in the good old days, the expedition were organised by the individuals or groups, with adventurous spirit. They explored the wilderness and enriched society with their valuable experiences. The names that strike me are those of Marco Polo, Scott, Emundsen and 'Visser' of Netherlands must be another one about whom I did not know. I am not casting any doubt as to whether Daulat Beg Oldi existed, nor whether he died at DBO and was buried at Polu. All that I wish to say is that the stone which was mistaken for the tombstone, is in reality the expedition memorial of the Vissers in 1935.

Epilogue. I mentioned about my discovery to a friend who is a keen mountaineer. He loaned me two volumes of the Himalayan Journal, which confirmed my deductions. In volume 42 of 1984-85 of this journal, an article 'Eastern Karakoram-A Historical Review' by Harish Kapadia, mentions about Dr. Ph. C, Visser and his fourth expedition in the Great Karakoram Range in 1929. It also confirms that Dr R. Wyss and Khan Sahib Afraz Gul were the surveyors of Govt. of India. There is however no mention of this expedition 'VISSER 1935', to the Depsang Plains and to the Karakoram Pass, which was possibly his fifth.

I wish I could convey to Dr. Ph. C, Visser or to members of his family that the engraved stone left by Dr Visser in 1935, near the Karakoram Pass still stands and bears testimony of his explorations in the Great Karakoram Range.

After this, 10 days of investigative reading I could decipher all names except one - F. A. Peter. The other things that are clearer to me now are: -

(b) HOOFT - It should be linked with 3t VISSER,

The name of the wife, constant travelling and exploratory companion and botanist to Dr Ph. C. Visser's expeditions was JENNY VISSER HOOFT. She died in September 1939.

(c) MAKRAM - It is name of surveyor of Govt. of India, MUHHAMAD AKRAM.

(d) Khan Sahib Afraz Gul Khan retired from the service of Govt. of India on 26 July 1933 at the age of 44 yrs. It was obviously after his retirement that he accompanied Visser in 1935.

(e) In 1928, the ice of Chong Kumdan glacier had blocked the upper Shyok river and made a lake whose surface was 65 sq kms and maximum depth was 122 m. On 16 August 1929, while Dr Visser and his party was camping at Daulat Beg Oldi, this dam broke with a great thunder at about 5 a.m.

Dr Ph. C. Visser and his wife J. Visser-Hooft were well-travelled explorers in the 1920s and 1930s - having made four journeys to the Karakoram in 1922, 1925, 1929-30 and in 1935. During their last journey, they were accompanied by Dr R. Wyss (a geologist), Muhammad Akram and Khan Sahib Afraz Gul Khan (excellent surveyors lent to them by the Surveyor General of India). F. A. Peter is the only person in the party not specifically des-scribed in the brief account of exploration in Kenneth Mason's 'Abode of Snow', Pp. 242-243.

Afraz Gul Khan's expert plane-tabling of the area (he was with the Vissers in 1925, 1929-30 as well) has contributed greatly to the cartographic achievements of the S.O.I. and his accuracy and uncanny instinct has been commented upon by all his associates and superiors.

The author informs that the above stone was helicoptered out to the army museum at their HQ at Partapur, in the lower Shyok valley. It will be well-preserved for the posterity. 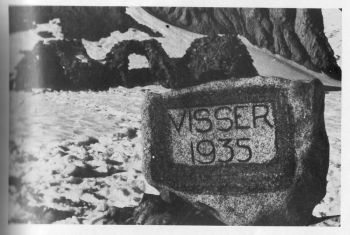