BETWEEN ANNAPURNA I (8091 m) and Fang (7647 m), we can distinguish a peak with altitude over 7700 m. A spur well drawn, descends from this peak to the valley of Miristi Khola. This peak has been called the 'Nameless Peak'.

The aim of this expedition was to climb this NW spur and to reach the Nameless Peak and then carry on the ascent, climbing the west ridge to reach the summit of Annapurna.

Base Camp to Camp 1

Following the edge of the moraine to the NW glacier of Annapurna traverse the secondary glacier stemming from the foothills of the NW spur. Following this glacier the route is easy but very exposed to serac falls. No shelf for the shelter from avalanches being found, an ice-grot has been made on the left bank of the bergschrund.

Camp established on 22 March by the team of alphinists.

The route follows the secondary glacier, turns left (east) over the seracs. A 45 o ice-slope fixed with rope permits us to reach a glacier shelf.

Take care of the stone falls. The rock might get detached from the faces which dominate. Camp 2 is located at the foot of a ridge coming from the spur, against the bergschrund. This camp established in the higher part of a little circus is very safe.

After the snowfalls at the beginning of April which damaged the tents, an ice-grot has been carved. Camp established on 25 March by P. Norbu, R. Fillon, P. Taglianut, P. and H. Sigayret.

After a short horizontal crossing on the glacier, we get a foot-hold on the west side of the NW spur of the peak. Climbing it by rock-slopes first then ice-slopes. Rotten rock, very hard winter ice. The higher part is made of a very bad quality rock : continuous fixed ropes until a little pass which constitutes the junction with the edge of the spur. Following the edge of the spur, very hard ice at the beginning, then snow on ice. A 90 m crossing brings us to camp 3. Continuous fixed ropes from the pass to the Camp 3. Camp 3 is established on 6 April under a little serac. On the 7th this camp is moved 50 m up on a little shelf. Probable altitude : 6100 m. Camp established by P. Norbu, R. Fillon, P. feiglianut, P. and H, Sigayret. During the second occupation of this camp, an ice-grot has been carved.

Camp 3 to Camp 4
Crossing almost horizontally in direction of a secondary spur. Climbing on hard ice-slopes (fixed ropes) and crossing a deep passage 60 m large (the passage is exposed to avalanches). Fixed ropes. Climbing this spur by snow or ice-slopes till the ridge becomes rocky. A shelf permits the installation of the Camp 4. Fixed ropes not necessitated by the steepness but by their nature: very hard ice. Camp established on 21 April by P. Norbu, P. and H. Sigayret.

Highest Point Reached
From Camp 4, an easy progress by the snow-slopes on the right of the camp can permit to reach the rocky edge of the ridge. But knowing the snow conditions on 29 April, the alpinists have climbed ice-slopes and two lengths in delicate and rotten mixed ground. Fixed ropes. The rocky ridge is then easier. Highest point reached : about 7200 m. Above the passage a 50 m high serac constitutes the last difficulty before the summit.

Philippe Dumas and Patrick Taglianut's Accident
On 21 April, while P. Norbu, P. and H. Sigayret are climbing to Camp 4, P. Taglianut and P. Dumas stay in Camp 3. While the Canadians who have climbed the day before enlarge the grot, a snow-slide hits the tent in which are P. Taglianut and P.Dumas. In spite of the searches made by the Canadians, the bodies have not been found. 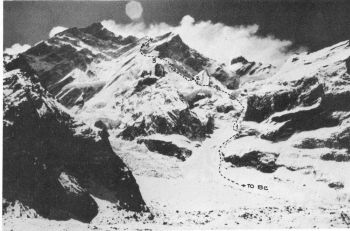 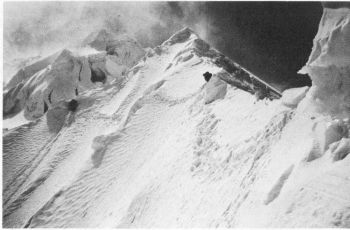 Traversing to Camp 3 on the Nameless Peak.