SIACHEN GLACIER 80 km long and 4.5 km broad is one of the long valley glaciers in the Karakoram and Himalaya. Sia—means 'Wild Rose' in Ladakhi. Nubra river valley which drains Siachen glacier is a green valley which is covered with shrubs of wild roses —Sia—and thus the name Siachen.

Siachen glacier area is virtually a mountaineer's olympiad. Black, broken hills stand in eternal peace in some of the oldest and biggest glacier system in Karakoram.

K12 (24,370 ft) peak on Saltoro Range (west of Siachen glacier) was the objective for the training of the Indian Army Mount Everest Expedition. Earlier (pre-Everest) training schedule was conducted in Kashmir and Machoi peak was climbed by a direct west face route between 9-11 September 1984.

A total of 54, including officers, JCOs, men and administrative personnel attended the training schedule between 20 September—20 October. The team moved by army trucks to Leh—across Khar-dung la—Nubra valley and concentrated at the snout of Siachen glacier on 28th. It was a long and tiring journey. Movement up the Siachen glacier commenced on 1 October. Siachen being a flat valley glacier, does not pose technical problems in route opening/finding except for ice-pinnacles, big crevasses and the loose moraine. Camp 1 was established (12,000 ft) at the junction of Terong and Siachen on 2 October. Camp 2 (13,000 ft) was established at the junction of K12 glacier (local name, Gil) with Siachen on the 3rd. From Camp 2, the expedition approached the peak along the K12 glacier. Since going was easy, climbers were fit, acclimatized and local army formation was backing administratively, establishing the first two camps on Siachen and building up was not much of a problem and movement was faster.

Camp 3 (14,000 ft) was established on 5th on K12 glacier. Beyond this camp, the expedition negotiated a 3 km stretch of badly crevassed (but not unstable) icefall. Ice conditions in the region during autumn tend to be extremely hard and brittle. After 3 days of sustained effort, a way was found across the badly crevassed icefall to the site of Camp 4 (16,500 ft) on 8 October. Route over crevassed area was fixed with ropes and marked by flags. It was an experience to kick with crampons into glass-like hard and brittle ice of K12 glacier to most of the members.

Going beyond Camp 4 till the base of point 5960 m was comparatively easier except for a vertical rock band of 200 m. The difficult rock band was negotiated along a chimney and a crack to the snowfield. Camp 5 (19,500 ft) was established on a snow-covered plateau of 3 km X 5 km—an arctic panorama. Knee-deep snow had to be beaten, a difficult and tiring work at that altitude, to reach Camp 5 from the rocky chimney.

From Camp 5 base of west ridge (route choosen for attempt) was approached directly. After negotiating the north face of the west ridge—a very steep and difficult climb, summit camp was established (21,500 ft) on west ridge on 14 October. Temperature and wind conditions in Karakoram during mid-October tend to be on the extreme. It was good exposure to most of the members. 15th was used to stock the summit camp and position the summit and support teams.

On 16th Nb/Sub N. D. Sherpa, Hav Rattan Singh, Hav Neema Sherpa supported by two members occupied summit camp. The summit team recceed the route up the west ridge in the evening.

17th was a windy, cold and a cloudy day, weather pattern had changed gradually from 15th onwards. The summit team left for the attempt at 0830 hours. Due to extremely cold temperatures and strong winds they had great difficulty in lighting the stove in the morning. West ridge of K12 is a very steep, knife-edged arete exposed on both flanks. Ice condition was much harder and more brittle. Progress was slow yet sustained. We could see the summit team approaching the flatish area about 800-1000 ft below the summit by 12 o'clock. Clouds covered the peak by then. There was no communication. Support party of three members was sent to summit camp to assist the summit team in need. They were also tasked to attempt the peak in case the first attempt proved abortive.

Summit party kept on climbing under very difficult conditions and finally reached the top of K12 at 1530 hours. They were exhausted. Their extremities were numb due to the extreme meteorological conditions. But they had done it. After spending about 20 minutes on the top the team started descending. Weather by then had turned worse. Visibility was poor. Descending the sharp, steep ridge was problematic. With careful belay they retraced their steps and reached summit camp at 1830 hours totally exhausted, chilled yet in one piece. K12 had yielded to the army team's very daring and dedicated endeavour.

Further attempts on the peak were discontinued in view of extreme temperature and meteorological conditions. Higher camps were wound up and the expedition concentrated at Siachen snout and the base camp on 30 October.

Eastern Karakoram in the Indian part of Karakoram have a galaxy of towering peaks. The area is now open to Indian and foreign expeditions. The region is unexplored, unspoiled and virtually a mountaineer's paradise. Karakoram can be attempted in all seasons and they offer the best and worst in climbing in every respect.

In H.J. Vol. X, p. 115, 'Karakoram Nomenclature'; K. Mason had classified two peaks in the range as under in the Chumik Group.

The height of K12 was considered to be 7468 m in most literature. It now appears that both the peaks are one and the same, K12. The height accepted by SOI is 7428 m. K12 glacier in the east (unnamed on the recent map) is locally known as 'Gyong la II' or 'G IF glacier. 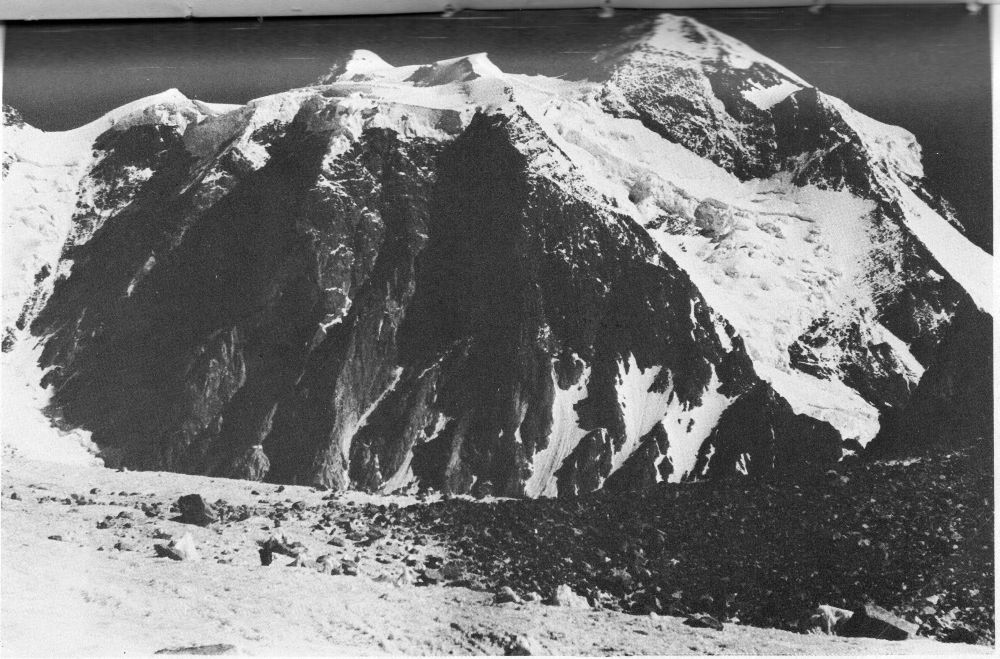 30. The south face of Mamostong Kangri. The route of first ascent was up the NE ridge on extreme right.
Article 15 Photo: Cot Balwant Sandhu 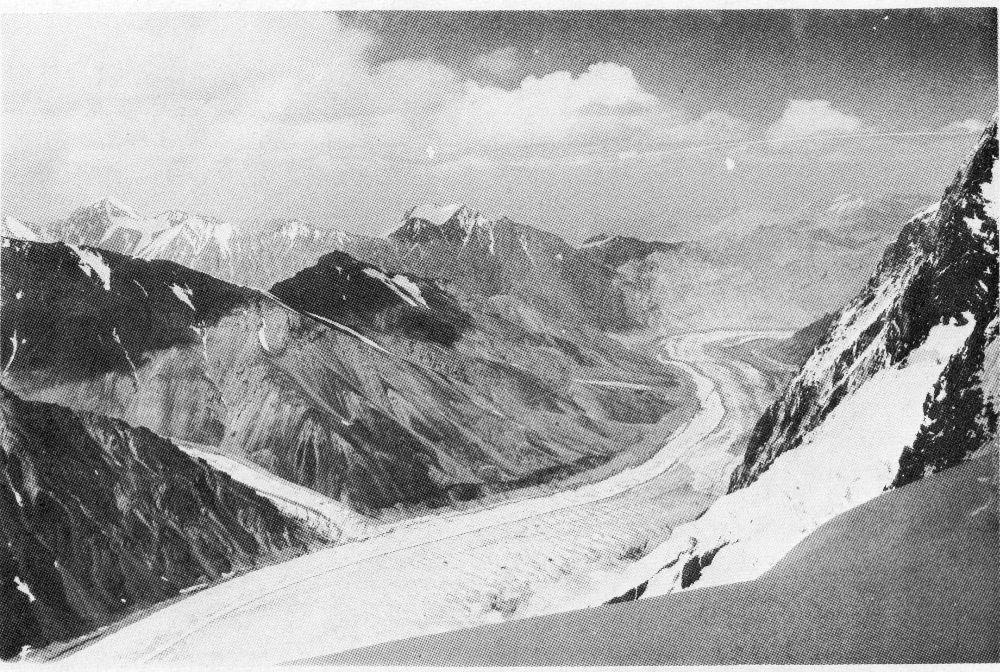 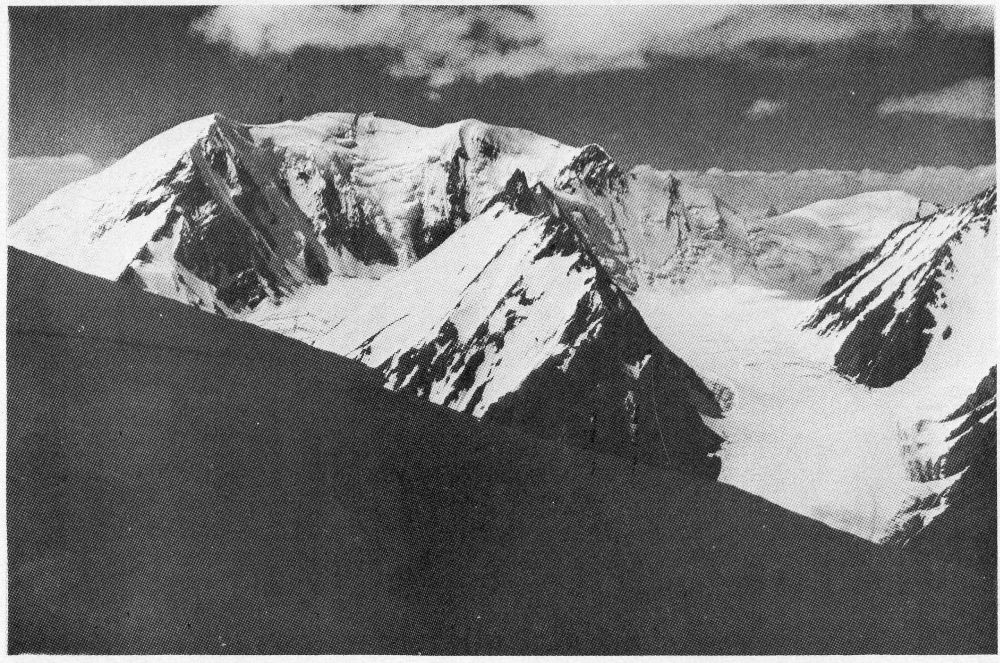