UJA TIRCHE is a 6202 m peak lying on the eastern flank of the Siruanch glacier which flows northwards from the north face of Tirsuli. The Girthi Ganga flows around the north ridge of Uja Tirche and a few kilometres later joins Dhauli Ganga at Malari village. Having read a few accounts of expeditions to the region east of Malari our curiosity was aroused and we decided to see it first hand. Uja Tirche was first climbed by the Scottish Himalayan expedition in 19501 by the north ridge and later by a team from Calcutta in 19742 by the W ridge. Our two man expedition consisting of Chandrashekhar Tambat and myself intended to follow the W ridge. We left Bombay on 30 September, aware of the fact that it was likely to be cold in the mountains in this season, and reached Malari on 6 October. We spent three days in Joshimath to get our inner line permits. At Malari we found the entire village getting set to move down in the face of approaching winter. The army came to our rescue by providing us with the kerosene which we could not procure at Joshimath. Looking around Malari we saw that the mountains were dry and dusty with few trees and greenery. According to the villagers this was because of poor snowfall the previous winter.

We set out from Malari on the 7th with three porters we had got from Reni. Of them Anand Singh had gone with the Calcutta team to Uja Tirche. The walk to our base camp on the Siruanch glacier took us three days. On the first day we climbed up the steep hill-side to the east of Malari and camped at a spring. It was windy all day and most of the night. This was to be the pattern on most of the days of the expedition. The next day we started before sunrise so as to reach Surans ka dhura, a 15,000 ft pass, before the wind really picked up. On the way up we were pleased to see a herd of bharal. We paused before the col to enjoy the view presented by the range of mountains to the west, from Kamet in NW to Dunagiri in SW. On crossing the pass we had our first glimpse of Uja Tirche. It had a long snow covered and corniced north ridge and a rocky W ridge. The mountains to the north and northeast were barren and rocky with no snow cover.

Climbing down from the pass we camped at Chilkuanch at about 14,500 ft. Early next morning we were pleasantly surprised to see moire bharals. We descended the mountainside and reached Lampak at the snout of the Siruanch glacier. This was the base camp of the Scottish expedition. We continued up the glacier and established pur camp at the point where the W ridge of Uja Tirche descends to the glacier at 14,200 ft. From here we had a magnifi-cient view of the north wall of Tirsuli. To the west was an icefall of a glacier from the Lampak group of peaks. The porters were sent back after they promised to return on the 24th.

The next two days we crossed the glacier and searched for a way to get off the glacier and climb onto the mountain. After a number of false starts which gave us some exciting mud climbing experiences we struck the right spot. The route climbed steep grassy slopes on the W ridge till our way was barred by a huge rock wall. Here we traversed to the right on a scree slope which gave us a few tense moments. Crossing a dry stream bed we climbed a rock wall covered with snow. Here we discovered a piton placed by the Calcutta team. Above the wall we came upon an open area where we searched in vain for water and the Camp 1 site. We set up Camp 1 at about 17,000 ft near a snowneld. From here the Lampak group and the mountains around Kamet presented a beautiful sight. We moved into Camp 1 on the 14th.

On the 17th we set out to recce the route to Uja Tirche. We crossed the mountain diagonally to reach the top of the W ridge and then vent along the ridge. There was no snow on the way, only a little at the top, but we decided to return from that point as we did not have our crampons along with us. The next day we retraced our steps and then proceeded further along the ridge. We were relieved and possibly a little disappointed to find no difficulties on the way to the top. We reached the summit at about 1 p.m. The sky was absolutely clear but there was a strong cold wind which prevented us from really enjoying the view. To the north and east were the dry wastes of the Tibetan plateau. The view on tiis side was enhanced by the distant snowy peak of Kailash. Ve could see the summit of Hardeol peeking above the massive wall of Tirsuli and we could also see Dunagiri. To the west were the now familiar peaks of Hathi Parbat, Ghori Parbat and Kamct. After hurriedly photographing the panorama we moved dovn.

Base camp was reached the next day. The following days till the 24th were spent in exploring the Siruanch valley. We climbed up to the Lampak glacier and for the first time saw Uja Tirche in its entirety. A walk up the Siruanch glacier allowed us a look at Chalab (6160 m) to the east of Tirsuli. On the 24th the porters arrived early and we dashed off down the valley following tne Siruanch gad (and avoiding the Surans ka dhura) to reach Malari the same day. We were happy to be off the mountain as skies were now full of clouds promising snow. 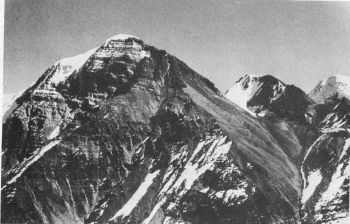 Tirche from Siruanch glacier. The route climbed the gully on right and up the SW slopes to top. The 1950 Scottish route was along N ridge on left. (Photo: C.D. Tambat) 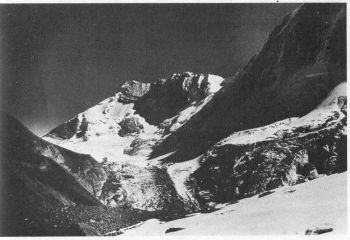