On 5 June two members (Zvone Kofler and Janko Azman) of the 3rd Jugoslav expedition climbed by a new, direct way the south wall and reached the peak of Istor-o-Nal (7,398 m.)1 in the area of the Upper Tirich glacier. It is the second ascent of the principal peak. The first to reach it was a Spanish expedition in 1969 following the SW ridge. All other expeditions reached only the west peak or remained beneath it, the only exception being an Austrian expedition in 1967, which reached the two north peaks from the west.

The Jugoslav expedition consisted of ten members. They set off in four vehicles on 25 April. They reached Rawalpindi on 9 May. After settling all the formalities with the Pakistani authorities they flew from Rawalpindi to Chitral on 16 May. They continued the journey to Charun by jeeps, then across Zani An or Tirich Pass (appr. 4,000 m.) to the village Shagrom and to the Base Camp on donkeys or horses and with porters. The porters were excellent and caused no problems. The expedition did not hire high altitude porters, except for two couriers. . The Base Camp was put up on 22 May at the altitude of 4,500 m., at a place called Nalagut, on the Upper Tirich glacier; on 24 May the first high altitude camp (5,300 m.), the second (5,800 m.) on 30 May and the third (6,600 m.) on 4 June were established. It was from here that the ascent was pursued across the Col and the northern snow-covered part to the principal peak. They were completely exhausted on their return, one had lost his goggles and was troubled by snow-blindness ; the weather conditions were most unfavourable. Bad weather kept up for two days and hindered the rescue of the two members. After five days all the members happily reached the Base Camp. With the exception of the two above-mentioned days the weather was excellent, only rather windy above 6,000 m. Between the Camps I and II there was partly rock climbing, reaching IV-V degrees, and just above Camp II the expedition fixed 500 m. of rope' At places the slope was 60° and more. The return to Chitral took 5 days. The weather being miserable the expedition had to leave for Rawalpindi by jeeps after the authorities had issued special permission. On return the expedition had to hand to the authorities all the films for control. The expedition was accompanied by the Liaison Officer. On the way home the expedition met with an accident. After crossing the Pakistan-Afghanistan border one of the cars drove off the road, bumped into a tree, took fire and got completely burnt. One of the members of the expedition, one of the victorious two and one of the best Jugoslav climbers, got such bad burns that he died two days later in the Kabul hospital. The other two passengers got some scratches. The expedition returned home on 9 July. 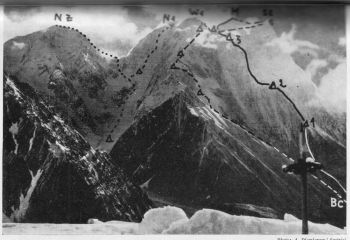 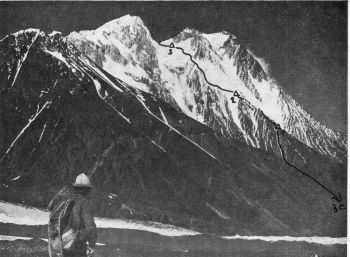 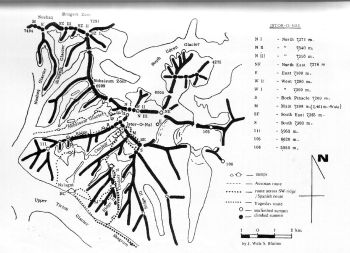