ON THE STAIRCASE TO HEAVEN

THE SWARGAROHINI MASSIF is a range stretching east to west in the Garhwal separating the picturesque Har-ki-Doon and Ruin-sara valleys. Peaks ranging from 6252 m (Swargarohini I) to 5984 m (Swargarohini V) comprise this range.1
Swargarohini I (6252 m) was previously attempted in the 1950s by J. T. M. Gibson who climbed several peaks in this region with teams from the Doon School. By scaling a ridge, which he called the Scimitar Ridge, his team reached a height of 19,000 ft when a rock gendarme blocked their way. Attempts in 1958 by Allan Berry and later by Hari Dang had also been unsuccessful. In 1974 came an expedition from Canada led by D. S. Virk. Along with two other Canadians the other notables were Dr Charles Clarke and two climbing instructors from India, Rattan Singh and Mohan Singh. They succeeded in scaling Swargarohini II (6247 m). In 1977 a team from Bengal scaled Swargarohini IV (5966 m) mistaking it to be the main peak.

Swargarohini - or Surgnalin (as shown in older maps) first aroused my interest towards the end of 1983. Neeta Bhoir gave me a vivid description of how she saw this beautiful range of peaks from the summit of an unnamed peak (5749 m) which she scaled whilst as a trainee at the Nehru Institute of Mountaineering. Major Prem Chand (now Lt Col) who was in charge of the course asked the trainees which peaks they would like to attempt in this region. When Neeta pointed towards Swargarohini, he smiled and said that it was no doubt a very beautiful peak but a tough one at that and would necessitate quite some difficult climbing on its upper reaches.

In 1984, with a small team of three and a porter, we ventured in this region. We studied a detailed map of the region. We had been able to obtain permission to attempt only Swargarohini III (6209 m). After setting up BC at the Ruinsara Tal at 12,000 ft we proceeded to set up a camp on the moraine at 13,800 ft. Gazing up at the two peaks of the massif confronting us we mistook the higher peak to be Swargarohini II (6247 m). Thus settling for the peak on the left with a lesser height we decided to attempt it. It was actually Swargarohini V (5984 m). After fixing a lot of rope below the west ridge of the peak on a rock wall followed by an ice-wall we finally gained the summit ridge of the peak. An attempt was made from a height of 15,500 ft (Camp 2). We had lost days in relocating camps and recceeing the col between peaks V and III. The only day we could make an attempt proved abortive as we were hit by a severe snow-storm about 200 ft below the summit. A rock gendarme followed by a sharp ridge of snow and ice separated us from the egg-shaped rock summit of peak V (5984 m). Dejected we returned to our camp at 9.30 p.m. Each of us was determined to come back the next year with a larger team and attempt the main peaks of the massif.

Our expedition sponsored by 'Girivihar' (Bombay) had two objectives. Firstly to train the younger members in high altitude climbing. This was accomplished by scaling four peaks in the Ruinsara region of which Kalanag (6387 m) was the most significant. The second objective was to expose the more experienced members to some tough rock and ice-climbs on the Swargarohini massif.

Local legend says that the Pandava and their dog climbed Swargarohini to reach heaven. We planned to repeat their ascent, but only upto Swargarohini and no further. The team comprised of Shrikant Oka, Sanjay Borole, Anil Bhatia, Neeta Bhoir, two porters and myself.

Walk-in : 18-20 May: The walk-in through pretty forest brought us to the alluvial meadows around the Ruinsara Tal, our base camp at 12,000 ft.

Ferrying and acclimatizing: 21-27 May: Two days of ferrying up a cwm on steep scree slopes brought us to a shepherd's cave in the moraine at 13,500 ft. We placed our ABC and could view two peaks Swargarohini III (6209 m) and Swargarohini V (5984 m). We planned to attempt III (unclimbed), II (6247 m) which was climbed only once in 1974 by the Canadian team and, the unclimbed I (6252 m). Photographs taken from the Bali pass (16,000 ft) opposite 3wargarohini, showed a col from which peaks II and III could be attempted. Landslide-prone moraine and a glacier was crossed and CI was placed at 15,500 ft on the second glacier which descended from a col between peaks V and III. A twin recce established a route beneath an icefall up a col and continued up an arm of the col that seemed to go in a grand sweep upto a rock gendarme with a basin of snow and ice below it. Ferrying was an exacting process to the gendarme with a tricky traverse on verglas. The basin was found to be of ice with a thin Layer of snow. Two ledges were cut out to set up Camp 2 at 17,500 ft. The return to CI was interesting threading through the icefall with crevasses strewn all over.

Route opening: 28-31 May: Sanjay, Bhatia and a porter Dccupy C2. The next day they fix ropes on the route to C3 which consists of an ice-wall (400 ft) followed by a sharply rising arete of rock, ice and a heavily corniced snow-ridge which ends below a rock gendarme of a severe grade. Ropes are fixed with a variety of hardware. Ropes of the 1974 Canadian team are found on the arete but they do not use them. The rest of us occupy C2 on the same day. After a rest day (30th) leaving one porter for a ferry from CI, we push up the ropes with Sanjay, Bhatia and a porter occupying C3. We were soon hit by a severe snowstorm on the arete. Finally reaching the gendarme Shrikant, Neeta and myself (ferrying team) unloaded our sacks on a tiny ledge and slid down the fixed ropes buffetted and tossed by high speed winds all the way to C2. The C3 team battled it out on the rock gendarme. After a few abortive attempts a set of friends jammed in a crack helps them to gain the top of the rock and haul up their rucksacks. They descend and set up C3 (19,000 ft) on the other side of the gendarme in bad weather.

Summit Story: 1-3 June: At C2 we (ferrying) stay put after our tribulations of the previous day. The three at C3 make a summit attempt but finding their camp much below the col leading to Swargarohini II and III they return deciding to shift C3 as close as possible below the col on the morrow. On 2 June Neeta, a porter, and myself move up the ropes as a second summit team. We reach the gendarme in rapidly deteriorating weather. A note stashed in a crack on the ledge tells us of the first team's proposed shifting of camp and their subsequent attempt on the 3rd on both the peaks. A shortage of food and fuel is also mentioned. We give whatever little food we had to our porter and he proceeds to join the team at C3. I descend with Neeta to C2 in the same conditions that prevailed two days ago. Halfway down the arete we turn back to see the summit team proceeding to the col to set up their new C3. Our porter labours- up the gendarme and follows them. He almost misses them in the whiteout. Pausing for a smoke he glances over his shoulder and locates the tent. So four prospective summiteers huddle in a two-man Goretex tent waiting for a shot at the twin summits.

3 June dawned clear and bright. At C2 we strained to catch a glimpse of the summiteers and were soon rewarded with the sight of four dots, Sanjay, Bhatia and porters Himalay and Myla labouring up the corniced summit ridge of Swargarohini III (6209 m). Cutting steps dangerously close to the heavy cornice and at times breaking bits of it they inched their way up. The weather held, and tenaciously these brave lads gained the summit. 6209 m was a virgin no morel Customary photos and offerings, and then the weather packed up. With tremendous concentration they descended to the col. The summit of Swargarohini II (6247 m) proved much easier to scale but the weather was daunting and whiteout prevailed. This was a second ascent and eleven years after the Canadians had stood on its summit.

The summiteers came down to C2 on the 4th and were warmly greeted by us. After retrieving all the fixed ropes and hardware, we raced down to the Ruinsara Tal on the 7th to a joyous reunion with our successful other team. And a bonfire crackled in a light drizzle as we wrote a finish to our mountain adventure.

Though the peaks of this massif are of no great height as per Himalayan standards, each one of them affords some tough and technically interesting climbs on both rock and ice. This is notwithstanding the capricious nature of the weather in this region.

Swargarohini I seen from the col between Pks II and III 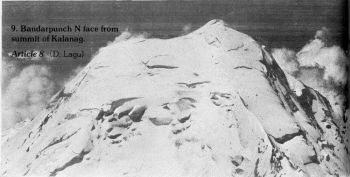