Swiss Nepalese Joint Expedition
The aim
THE EXPLORATION and ascent of the Ohmi Kangri, the solving of the topographical problems about this mountain.

The objective
This mountain has been mentioned for the first time in 1930 by the Swiss Dyhrenfurth/Kurz expedition as Nupchu. In 1949 another Swiss team (Sutter/Wyss-Dunant) had made an attempt on this mountain climbing the northeast slope (Tibet), but they abandoned at about 200 m below the top. The Japanese, probably, while they were climbing the Sharphu in 1963, discovered the mistake of this area, and this allowed the 1982 new Japanese expedition (Kaneko) to come closer to the Ohmi Kangri by its southwest slope (Nepalese). It didn't however reach the main summit.

Preparation
The decision for this new expedition had been taken in February 1983. The well-known climber Toni Hiebeler from Munich, who is now dead, gave us the idea of going to the Ohmi Kangri. Thanks to Mr and Mrs Kyburz (Marin) who conducted all the exchange of letters and with the help of the pictures taken by the satellite 'Spacelab 1983* at the altitude of 250 km, we could contrive a closer idea of this mountain which was so poorly recorded up to now.

We received the official authorization only towards the end of 1984 for a joint expedition with three Nepalese members.

Expedition
Only three days after our arrival, we leave Kathmandu by bus, with the base camp team, the Sherpas and the liaison officer. The road from Dhankuta to Hille, just about to be finished, is very difficult for our driver. It is being built on about 30 km long ridge of the mountain. For the approach march, we needed about one hundred and ten porters.

The march has two different ways; from Hille (1900 m), one follows the top ridge that comes up to 3000 m and then goes down to the Tamur valley that one joins at Dobhan (650 m).

Then, one climbs the Tamur again, leaving on the right the Yalung and the Ghunsa valleys. From the last village of Yangma (4330 m), one can reach the base camp in one day. For this last clay's march, we used yaks instead of porters. This approach march takes place in a marvellous and unknown area, not yet open to trekkers. The village of Yangma, with its Tibetan population is very different from the remainder of the valley.

We established our base camp very close to the Japanese camp of 1982, at the same height (5130 m), in a grazing place for yaks not covered with snow. From there, one can see Ohmi Kangri, but from this perspective it is difficult to understand its structure.

Knowing that the Japanese expedition could not reach the highest point by following the southwest ridge,1 we immediately look for another route. The first problem to solve is the icefall 300 m high. Out of the four possibilities, one must be adopted. The secondary ridge rising on the west of the icef all shows a wide pass at 5500 m easily approachable through a small valley and slopes. That gives way to a secondary glacier. Then by crossing it to the glacier above the icef all, we shall settle our first camp at 5700 m near the medial moraine.

Which one; the southwest ridge or the western face - northwest ridge? (Photo 4) A thorough look at the two routes made us abandon the latter, because of its particular dangers (seracs) and offering fewer chances of success for many lines of roped mountaineers.

So, Camp 2 is established on the southwest ridge at 6450 m, probably where the Japanese established their Camp 3.

An icy slope, very steep towards the end, leads to this place that shows the beginning of the technical corridors. First of all, a stony abrupt fall, then a very sharp icy ridge are equipped with fixed ropes. The dome that follows, very large but steep, is cut at three places by wide crevasses and it is also necessary to use fixed ropes. Camp 3 is located on the sharp edge of the ridge, just before the junction with the summit ridge, at 6810 m. Between Camp 2 and 3, 420 m of ropes have been fixed.

During the first night, one of the two tents is blown away by the storm. The three Sherpas who had stayed in it were not injured but were discouraged. If the mountain has lost the secret of its structure bit by bit, we are not yet certain as far as its height is concerned. An observation from a point at 6075 m on Chaw East peak - JSyao Kang ridge, facing it shows that the west summit is slightly higher.
It remains to prove it with an altimeter.

From Camp 3, a fore-summit at 6940 m is quickly reached, but what follows appears to be very difficult; very sharp ridge, huge cornice overlooking the Tibetan side. However, a group of roped mountaineers went as far as the central summit and proved that the ice-cornices are strong enough. Doing this, they confirm that this is the place the Japanese had reached; many remains of fixed ropes prove it. The altimeter shows 7000 m. The psychological barrier has been overcome and the following day, another group makes the attempt and reaches the main top on 14 April 1985 at 1215 hrs (west summit) at the height of 7045 m. (Photo 5)

After that all the members of the expedition, excepting the doctor and the {Sirdar have reached the top. Then, we remove all the material leaving only a few stakes and ropes.

Conclusions
Besides the climbing success, we have the satisfaction of having completed the knowledge about the Ohmi Kangri and its area.

A topographical map will be published in the booklet that will be issued this coming autumn and that will also include a chapter on Yangma and its population.

However a problem has not been definitely solved is the altitude of the Ohmi Kangri. The Government list of 1983 indicates it at 6829 m, the preceding list at 7922 m! The Japanese evaluated about 7400 m in 1983 and some maps mention 7028 m.

By photogrammetry, on the basis of two pictures of 'Spacelab', we determined the altitude of Yangma at 4315 m and the height of the summit at 7032 m.

However, the area of the summit is surrounded by some clouds on these documents, and thus it is difficult to measure it. From the Yangma reference point, we stated the altitudes by various measurements with the help of altimeters, whose average gives the result of 7045 m for the summit.

In order to obtain more satisfactory results, we asked a neutral office, 'The Federal Institute for research in forestry' at Birmens-dorf, to determine once more the altitude by photogrammetry. The results although slightly different from ours, confirm that the Ohmi Kangri is really above 7000 m; Yangma 4398 m; main summit 7222 m. 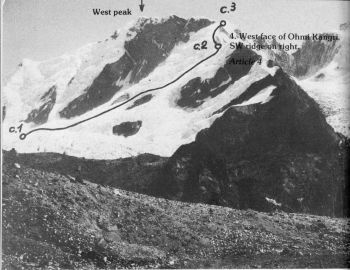 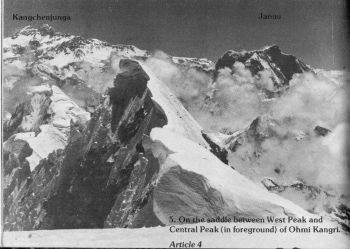 On the saddle between West peak and Central Peak (in foreground) of Ohmi Kangri.