CLASSIFICATION OF THE HIMALAYA1

This study aims to classify the different groups of the Himalaya from its eastern end westward through the peake of Garhwal (Uttar Pradesh) in India. Wherever data have been available, it gives a listing of all peaks above 6500 m (21,326 ft) and all officially named peaks between 6000 m (19,685 ft) and 6500 m with altitudes and coordinates. In some ranges, where peaks are lower, some unnamed peaks in the second category have been included.

The Nepalese section depends almost entirely on the outstanding work done by Dr Harka Gurung and Dr Ram Krishna Shrestha. These two Nepalese scholars put together an inventory of all Nepalese peaks above 6000 m with the latest altitudes, corrected names and coordinates. They used primarily the Survey of India topographic sheets at a scale of an inch to a mile (1:63,360). They also used maps at 1:50,000 prepared for the Sino-Nepalese Boundary Agreement of 1979.

For the Indian regions, extensive use was made of three maps published by the Schweizerische Stiftung filr Alpine Forschungen (Swiss Foundation for Alpine Research) of Sikkim, Garhwal East and Garhwal West. Harish Kapadia and Dhiren Toolsidas in particular gave great assistance by checking Indian data against further information available to them. Col Lakshmi Pati Sharma made Valuable suggestions. Dr Shi Yafeng also helped by providing an excellent Chinese map of the Everest region. In all sections, the Japanese Moutaineering Maps of the World proved indispensable.

Dr Zbigniew Kowalewski had made fine studies, which are reflected here. I am also grateful to many people, including Soli Mehta, Jimmy Roberts, Trevor Braham, Capt M. S. Kohli, Brig Jag jit Singh and others who criticized a preliminary rough draft.

It will be noted that some of the altitudes differ from what may have been previously accepted. These are the results of recent surveys. Also, some of the names are different (Kumbhakarna instead of Jannu, for instance), but the ones published are those which are now officially accepted by the various countries. Spellings have been made as much as possible to accord with what is used in the countries concerned.

Unfortunately in some regions available data are scanty. It is unlikely that very accurate surveys have been made in Bhutan. Indian authorities have been reluctant to give out information (which at the moment prevents continuing this survey farther to the west) and Chinese (Tibetan) sources have been very scant.

1. Reprinted from The American Alpine Journal Vol. 27, 1985, with the kind permission of the editor. For latitude and longitude of each peak refer to the AAJ,-Ed.

This study was instigated when the late Toni Hiebeler requested the compiler to give a paper at the Himalaya Conference of the German Alpine Club in Munich in March 1983. The Karakoram had been classified admirably at the Karakoram Conference of 1937 as reported in the Himalayan Journal, Vol. X, 1938 on pages 86 to 125, but nothing similar had been done for the rest of the great Asian chains.

In defining various mountain ranges, the chief landmarks used here are major rivers and passes. In many cases where the mountains diminish to lesser altitudes, there is no attempt made to make a definitive border, especially in the north and south. Although for the most part the great peaks lie in the Great Himalaya, the next well defined chain to the north, the Zanskar mountains, has some of the high peaks, such as Kamet and the mountains which divide western Nepal from Tibet.

The Eastern Himalaya as far west as the Kangphu-Amo Chu west of Bhutan is given only in summary for lack of data.

I. Eastern Himalaya to the Kuru Chu
(mostly in China and Arunachal Pradesh)
Namcha Barwa Range. Much of this range lies in China. It starts in the northeast with Gyala Peri (7150 m). It includes the Great Bend of the Tsangpo (Brahmaputra), where Namcha Barwa (7762 m) lies. The southwestern border of the group is the Siyom river (also on some maps JSiropate or Shapaleng), which joins the Tsangpo at Miging.

Pachakshiri Range. This goes from the Siyom on the northeast as far as the river which is called Chayul Chu in its northern part and {Subansiri farther south. The highest mountains appear to be Nyegyi Kangsang (7047 m.) and Gori Chen (6858 m).

Kangto Range. From the Chayul Chu on the east this group extends to the Kuru Chu on the west. This section has its western part in Bhutan. The Kuru Chu flows south from the Mo la in Bhutan. Kangto rises in this range to 7090 m.

II. From the Kuru Chu to Kangphu-Amo Chu (mostly in Bhutan)
Kunla Kangri Range. This area is separated from the Eastern Himalaya by the deep valley of the Kuru Chu in the east. It extends west to the Gonto la, the Gophu la and the Mangde Chu. In the eastern portion, several 6000 m peaks lie on the Bhutanese-Tibetan frontier, the highest of which is Chura Kang (c. 6500 m), just east of the Monlakarchung la. Farther west lie the highest peaks in the Bhutanese Himalaya, mostly on the frontier. The peak which may be the highest, Kiinla Kangri (7554 m) lies north of the main ridge in Tibet. Along the frontier from east to west lie Melunghi Kang (c. 7000 m), Kankarpunzum (7541 m) and Chum-hari Kang (c. 6600 m). Since the surveying has not been very accurate, it might be that Kankarpunzum, given as 13 m lower, could be higher than Kiinla Kangri. 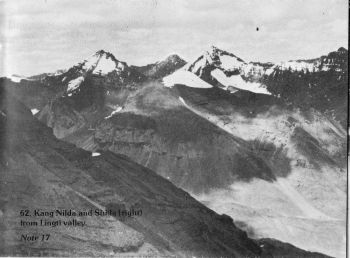 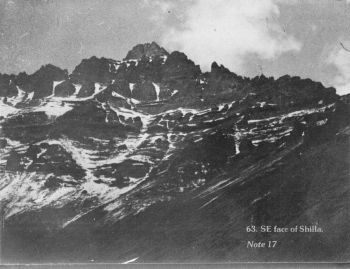 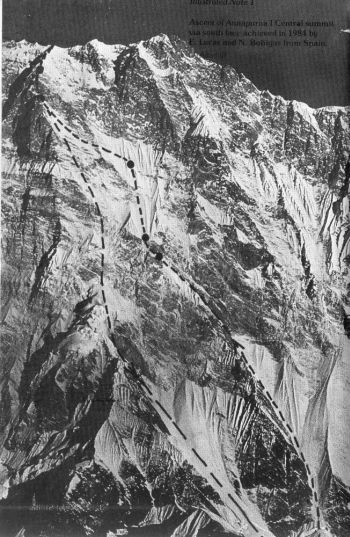 Illustrated Note I Ascent of Annapurna I Central summit via south face achieved in 1984 by E. Lucas and N. Bohigas from Spain (J. Altadill) 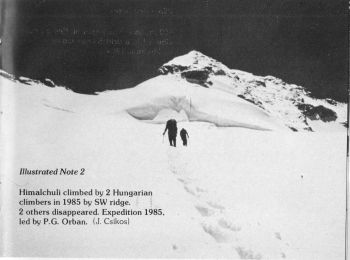 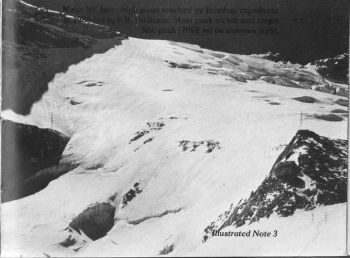 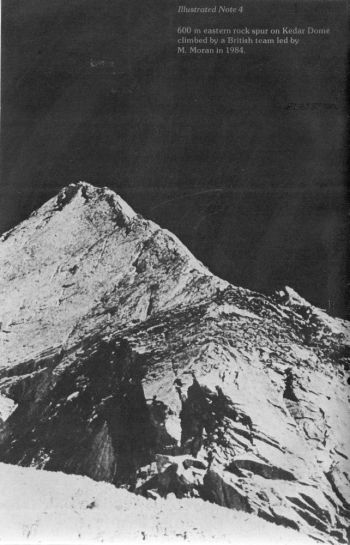 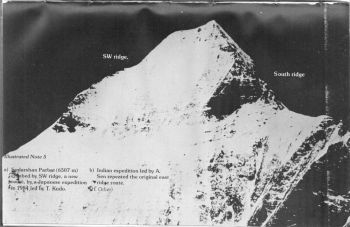 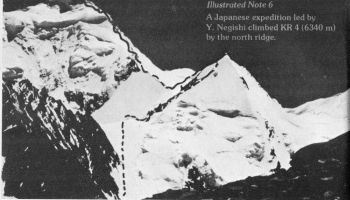 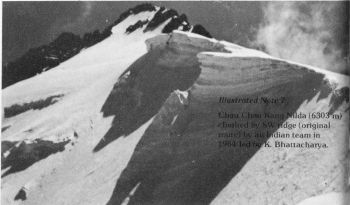 Lunala Range. Extending from the Gonto la, the easternmost source of the Pho Chu on the east, it goes in the west to the Toma la, where the Mo Chu springs (known downstream as the Tsa Chu and Sankosh). The name comes from the Lunala district which the range borders on the north. The principal frontier peaks from east to west are Zongophu Kang (c. 7100 m), Kangphu Kang (7212 m), Jejekangphu Kang (c. 7100 m) and Teri Kang (c. 7100 m). South of the Waghye la and southwest of Teri Kang, entirely within Bhutan, lies Tsenda Kang (c. 7100 m).

Chomolhari Range. From the Toma la and the Mo Chu on the east, this range runs from northeast to southwest along the northwestern border of Bhutan to the Tremo la. The western edge runs along the river known in Tibet as the Kangphu, in Bhutan as the Amo Chu and in India as the Torsa. In the northeast lies Masang Kang (c. 7200 m), south of the Toma la. The Kancheda group lies along the frontier. There are three principal summits, the highest of which is 6678 m. Farther southwest along the frontier lie Chum Kang (6536 m), Tshering Kang (6800 m) and Chomolhari (7315 m).

Kangchertjunga Himal. The northern limit of this range is the Lhonak Chu, Goma Chu and Jongsang la. The eastern limit is the Tista river. The western limit runs from the Jongsang la down the Ginsang and Kangchenjunga glaciers and the Ghunsa khola and the Tamur river. The group lies both in Nepal and Sikkim.

Because of the size of the range, it may be well to subdivide it. The Northern Subsection is divided from the rest of the section on the south by the Zemu glacier, the 6685 m col between Kangchenjunga South and Talung, the upper Yalung glacier, the col between P 7468 and P 7385 and the Kumbhakarna glacier.

meters meters
The Western Sikkim Subsection is limited on the north by the Zemu glacier and on the west by the Talung glacier.

Umbak Himal. This group is limited on the east by the Ghang la (5752 m), Pelam Chu and Yangma Chu and on the west by the Rakha la (5067 m), Walsang khola and Arun river.

IV. Arun River to Sun Kosi
Mahalangur Himal. This enormous range contains some of the highest mountains in the world, including Everest, Lhotse, Makalu and Cho Oyu. It is bounded on the east by the Popti la and the Arun river and on the west by the Gyabrag glacier, the Nangpa lay Nangpa Tsangpo and Dudh Kosi. It extends far north into Tibet.

The Makalu Subsection has the same eastern limit as the whole Himal: Popti la and Arun river. On the west and southwest it extends from the Kharta glacier, over the Karpo la and the 6130 m col east of $hartse and down the Barun glacier and Barun khola.

Pamari Himal. This range has as its eastern limit the Tamba Kosi and as its western one the Sun Kosi. Erwin Schneider calls the group the Lapchi Kang