The idea of organizing an expedition to K2 (8610 m) was for very many years the most preferred venture in the Polish alpine community. The first Polish application for permission to climb the second highest mountain in the world dates as far back as before World War II.

In 1974 these efforts resulted in an official consent but the Pakistani permit came too late-by the end of June 1974-and it could not be taken advantage of that season.

The expedition that year was redirected to Lhotse (8511 in) in the post-monsoon period and the summit had been attempted finally in the winter of 1974-5.

Our preliminary intention was to lead a new route but we had neither much photographic materials nor the time for reconnaissance before the decision. On arrival, we chose the longest and exposed, but at least not very steep, NE ridge. This route had been attacked by Eckenstein's expedition of 1902. The Base Camp was established at c. 5000 m on the Godwin-Austen glacier on 24 June near the Italian Base of the successful 1954 expedition.

With our arrival the period of clear weather commenced and lasted nearly a month.

The altitude work on the ridge: establishing the camps, supplying them, with equipment, food and heavy oxygen bottles, safeguarding the route with fixed ropes was done, without the help of high-altitude porters, in turn by all the team members to acquire the desired acclimatization.

Camp 1 was established at 5600 m on the upper part of the Godwin-Austen glacier on 25 June. The route of ascent ran through the lateral rib coming down from, the knot-point 6821 m on the main ridge. This pitch was steep, with ice and very unsound rock. Camp 2 was established at 6100 m (3 July) and Camp 3 just below the top of the knot-point at 6750 m (7 July).Between  Camp 1 and 3 nearly 2000 m of fixed ropes were used. Above Camp 3 was the hardest, an ice-rock ridge with cornices on both sides. It took us 10 days to overcome this section of the route. Wojciech Kurtyka fell 15 m down with the cornice on the Pakistani side and hurt his leg.

Camp 4, behind the difficult ridge, was finally established at 6950 m on 17 July. Every metre of the precipitous ridge was throughly safeguarded with fixed ropes but in spite of them we experienced great difficulties when traversing it with loads. Sometimes under bad conditions this 1000 m required more than 10 hours to cross.

The last ten days of July brought bad weather. The route to the snow Dome on the right edge of the shoulder of K2 (7670 m) where we planned to establish the penultimate Camp 5 was open )but our attempts to reach it in the following days failed. We left only food and equipment in a temporary store at 7300 m, but the deep snow, chilly wind and the fall into a crevasse of one of the members compelled us to retreat. Finally on 29 July the monsoon struck violently. The area of K2 was invaded by stormy wind and heavy snowfall that covered the Base with more than a metre of fresh snow. It raged over a week and all activity was paralysed. To make up the delay according to tactical plans we needed to supply about 30 loads of 20 kg each up to 7700 m. The total mobilization of all team members was necessary to establish, in one ascent from the Base, both the last high camps and to make a bid for the summit. The action began immediately the weather improved on 8 August but unfortunately there was further delay when we discovered that Camps 3 and 4 were partly destroyed, when we dug the tents out from under 2 m of snow.

Camp 5 was established as planned at 7700 m on 12 August. Next day six men (Cichy, Czok, Grochowski, Holnicki-Szulc, Kintopf and Kurczab) established Camp 6 at 8000 m at the base of the summit pyramid of K2.

On 14 August Cichy and Holnicki attacked the summit but the bid was unsuccessful. They climbed the first lower barrier of seracs but withdrew at 8250 m from beneath the main obstacle, a 60 m high step of vertical ice and rock slab. The second rope of Chrohak and Wroz undertook the task, on 15 August. They climbed the crucial pitch of the upper barrier, which took them the major part of the day. Then they moved across the steep snow slope and got over the last little rocks on the snowy fields leading up towards the summit. About 6 p.m. they stopped at about 8400 m. The oxygen reserve was finishing. They needed to retain the rest of the oxygen for their safe descent and unforeseen circumstances. Simultaneously they observed the worsening of the weather. These reasons and the lateness of the hour threatening them with a bivouac during descent caused their decision to withdraw with the summit almost within their reach. There fear of the weather proved to be right. Soon came a strong gale accompanied by heavy snowfall.

Chrobak and Wroz, rappelling all the time down steep slopes, reached Camp 6 at 1 a.m. in darkness, very exhausted, and after a short rest, reached Camp 5 at about 7 a.m. on 16 August.

The expedition was ready to undertake the two more summit attempts but as many as five members were medically unfit due to various ailments. The action started again on 28 August when a slightly better weather returned to the area. 13 alpinists in 3 teams set off from the Base Camp, but some of them reached only Camp 3 when the weather became quite bad again on 2 September and all climbers descended back to the Base Camp. This was definitely the end of the mountain activity. On 8 September we struck Base Camp and set out for the return journey home.

Assuming the altitude of K2 summit to be 8610 m (recently the height 8760 m has been given!) it seemed to us that the heights of the neighbouring summits on the map and differences between them appear quite proper. But we observed some anomalies nearer us in the K2 area.

The old Savoia Pass (6666 m or 6626 m on the different maps) couldn't be identified in the area. The only pass that could possibly answer to that name is situated as we observed more to the east over the Savoia glacier at an elevation of about 6250 m (as shown on the Italian map-scale 1 : 12500).

Further, we observed that the pass called Windy Gap, Sella dei Venti or Skyang La, to the NE in the direction of Skyang Kangri, is about 200 m lower (at least) than what is officially given on the maps as 6233 m. 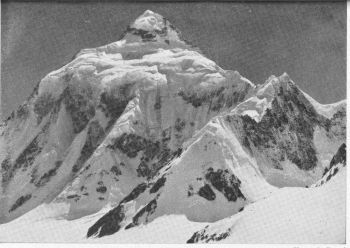 K2 seen from the Windy Gap. The NW. ridge is on the right sky-line. (Photo: J. Kurczab.)

Upper part of the route along the NE, ridge and the summit of K2. (Photo: J. Kurczab)