ONCE AGAIN, the Korean Manaslu Expedition was forced back from Camp 5 by even worse weather conditions during the pre-monsoon season of 1976. Before going into detail about this third expedition, I would like to briefly review the first two attempts of 1971 and 1972.

The 8 members of this expedition (one of them a woman) had reached 7800 m during the pre-monsoon season, but failed to reach the summit because of the bad weather. We also lost G. S. Kim, one of my younger brothers.

Right after the failure of our first attempt, the second expedition to climb Manaslu was organized. This time there were 10 members, and we reached Camp 4 (7200 m) on 7 April 1972. Unfortunately, an avalanche completely covered Camp 3 (6500 m) at midnight, tragically killing another of my younger brothers, H. S. Kim, along with 4 other members of the expedition and 10 Sherpas. Y. S. Kim, my youngest brother, was also at Camp 3 during the avalanche. It pushed him back 1000 m, but he survived.

Having already failed twice and lost so many lives, this time we hoped to succeed. We established Base Camp (4200 m) on 27 March. Shortly afterwards, Camp 1 (5100 m) was established and on 9 April, Camp 2 (5900 m). That same day, I landed at Base Camp by helicopter. On 19 April I arrived at camp 2. Camps 1 and 2 were not difficult to set up, because they were located in the same place as before. But Camp 3 was not easy to establish, due to the change in topography. During the first two attempts, we could reach Camp 3 with only fixed ropes, but this time we needed ladders totalling 200 m in length. Besides that, the general route from Camp 2 to Camp 3 was very dangerous because of avalanches.

After one week, they succeeded in setting up a route, but not Camp 3, because it was difficult to know where the Camp 3 of the second expedition had been established. We barely set up Camp 3 on 22 April (6500 m). Remembering that 15 members had been lost at this point, we decided to establish Camp 3 on the north side. But we were not sure Camp 3 would be a safe place. Still, right after establishing Camp 3, we continued to move our food and equipment there in spite of the danger.

On 26 April, I went to Camp 3 with 5 Sherpas. The next day I left Camp 3 early in the morning with 4 Sherpas to look for a route to Camp 4. I decided to set up Camp 4 just below the pinnacle, but there were many avalanches and dangerous crevasses. So I changed my mind, deciding to go around the pinnacle rather than straight ahead. At first, I thought we would need 2 days to plan the route between Camp 3 and Camp 4. But with the good weather and everyone in good shape, we established Camp 4 (7200 m) that same afternoon.

When I got back to Camp 3 it was 5.30 p.m. I was so tired from the two-days' work and so very thirsty that I drank milk with ice when I found there wasn't any fruit juice. I drank so much cold milk that I had stomach cramps, and I stayed in bed for the next day.

We advanced to Camp 4 without any trouble. But the course between Camp 2 and Camp 3 was dangerous because of continual avalanches. On this route one member was wounded, so he was brought back to Base Camp. Four of the Sherpas were covered by an avalanche, but they survived.

The goal of this expedition was to not lose any lives, whether we reached the summit or not. On 30 April, we got together enough food and equipment at Camp 3 to climb the summit twice. On 5 May, we decided to give it a try. Until that day, no one had been allowed to pass between Camps 2 and 3 without a special reason. This order had been given to prevent losing lives along this hazardous route. If the first or second group succeeded in reaching the summit, then the expedition would be over.

On 1 May, I went to Camp 4 with 3 Sherpas. Two days later we established Camp 5 (7700 m). Between Camp 4 and Camp 5, we used 800 m of fixed rope in the ice-falls. Now the only thing left to be climbed was the summit. The Sirdar and I were the first to attempt the summit. On 4 May, the Sirdar and I left Camp 4 for Camp 5, along with 4 Sherpas. That same day 5 years ago (1971) the first expedition had lost G. S. Kim, my younger brother. Our assistant leader reminded me it was the fifth anniversary of the disaster, so we held a memorial service for him.

The route between Camps 4 and 5 has a lot of open crevasses, and sharply sloped ice-falls. But the Sherpas had already placed a fixed rope, so we advanced without any difficulty. From up here we could see from Base Camp up to Camp 4. And between the camps there were beautiful clouds and the weather was good. Our group-there were 6 of us-climbed in silence. I thought this time we would surely succeed if the weather continued to ho good.

But who can say for sure? The weather got worse after noon, and later a snowstorm developed. At this time, one of the Sherpas returned to Camp 4 in bad shape, and the other became snow- blind. The rest of us continued to advance. The storm got worse, to and we couldn't move at all. At this point, we were at 7600 m, only 100 m from Camp 5. I expected the weather to improve, so I forced myself to reach Camp 5. Besides, the weather conditions made it easier to reach Camp 5 than go back to Camp 4.

When we finally reached Camp 5, there was such a terrible- wind and snowstorm that we were forced to lie down. The weather didn't seem to be getting any better. The Sirdar said to me. 'If we stay here all night, we'll almost certainly have a disaster,' so he suggested we retreat to Camp 4. There was no way to escape the storm, I thought, except by retreating. Fortunately, we arrived safely in Camp 4 later that night. But all of the members were seriously affected with frostbite.

The first group having failed to climb to the top, the second group at Camp 3 made another attempt. We lost 700 m of fixed rope because of avalanches. Due to the bad weather, and the continued avalanches, we couldn't reach the summit, and the end of the pre-monsoon period stopped further activity. 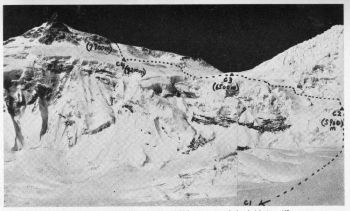