EXPLORING THE PIR PANJAL ON SKIS IN THE THIRTIES

WHEN THE SKI CLUB of India was formed in the late 1920's, downhill skiing and competitive racing, which was invented by the British, was fast becoming an exciting new sport in Europe. It attracted many people who found fulfilment in the thrill of speed, rather than those who preferred to use skis as a means of exploring the mountains in winter. Gulmarg and the magnificent slopes of the Khilanmarg above the forest, provided a superb arena for the downhill skier. At that time, few of them had climbed up to the ridge above the marg and viewed the huge areas of uplands, deep under snow, traversed by gullies and broad ridges, which lie beyond. For myself, who had learnt to tour over the alpine peaks and passes for some eight years, this was a paradise: it offered a challenge!

I spent a month in the Ski Club's mountain hut, high up on the marg and close to a steep couloir: "Christmas Gully", which provides a route to the ridge, some 800-900 feet higher. My companion was a delightful Irishman who had a relaxed view of life - (he was nicknamed "Charpoy"1 White) provided excellent company in the hut; but he lacked the energy and exploring zeal which possessed me. During the month that we spent in that area, I only persuaded him to accompany me on two occasions.

I set up my "Whymper" tent near the top of Christmas Gully, sheltered by a huge boulder; it saved me the time and labour of plodding up the gully to reach those shining uplands beyond the ridge. I was lonely, and the risks of solo ski exploration were considerable. But the sense of freedom, the prospect of discovery and the satisfaction of achievement made an irresistible appeal. I was twenty years old; despite my apprenticeship in Switzerland, I had a great deal to learn.

1 Charpoy: an oriental string based bed

It would be tedious to describe the routes I pioneered during that month of April, 1931. They are probably familiar to later generations of skiers. Each "run" provided a descent of some 4000 feet; the running on a hard snow crust, slightly melted by the leat, was superb. Conversely, the return journey, whether to my tent or the Khilan hut, made enormous demands on my stamina. The snow was now very soggy; despite my skis, I sank deeper -and deeper and it was increasingly exhausting to lift the skis and take each step. The heat became intense. I was learning the hard ~way about climatic conditions in the Himalaya, in terrain not dissimilar from our Scottish Cairngorm mountains.

I quote from my climbing journal: "I began ploughing away with the greatest labour through the trees on the East flank of the ridge. It would be pointless to describe the terrific strain of this journey back (to the Khilan hut). No-one who has not waded on skis through saturated snow, which weights a ton and sticks like treacle, can know what it is like. But I found my way back in four weary hours, utterly done up and suffering acute pain in my eyes... Never has cocoa tasted so good!"

Another discovery was the sheer volume of snow. For example, I had to abandon my tent below the ridge, when a storm blew up. Forty eight hours later I returned, to find no trace of it. It was buried beneath five feet of packed hail stones, whose surface was so hard that with the help of our two Kashmiris and three tin plates, it took us four and a half hours to dig it out.

I was, in other respects, very ill-equipped for this kind of camping. My journal records that I had no sleeping bag or mattress: only two blankets. I had no stove; only firewood!

I did not sleep much. The evening meal had not been
particularly appetising owing to the difficulty of making
a fire (in the snow). I found the snow platform fearfully
cold and hard.

But there were some rewarding memories to offset so much toil and trouble. There was the moment when, from the summit of Apherwat (4150 m), I gazed in wonder at the Karakoram giants, and Nanga Parbat. Little did I know that, four years later, I would be engaged in the most memorable of all my mountain experiences, on Saltoro Kangri. And there was a different, no less marvellous experience at the end of a day's skiing.

We came across snow-free patches bright with crocuses and primulas; the air was redolent with the scent of pine needles. What a glorious combination! To start the journey amid the winter snow, and finish in the warmth and budding life in the valley.

A year later, I returned to the Khilan but with another companion, Ricky Thomas. Ricky was a fast-speaking Welshman and a ball of energy: very different from my ‘laid-back’ Irish friend. "Charpoy" White. But we could find no trace of the hut! Only after another "marathon'* dig did we come across the broken timbers, smashed to matchwood beneath six feet of snow. We made a similar discovery a few days later, when visiting the former shepherds' huts on the Linyan Marg; they, too, had been destroyed.

I wanted to explore the even more remote country south of the Ferozepur Nala, which is dominated by the highest summit in the Pir Panjal: Shin Mahinyu (4100 m). Once again. I was destined to do so alone, but due to a very different set of circumstances. As Ricky and 1 struggled through the forest below the Khilan Marg. making our way with great difficulty towards the main river .... I was carrying my skis on this difficult ground, which was partly bare of snow; but Ricky insisted on keeping his on. I turned to tell him that I did not see a way down. At that moment, he skidded on an icy patch of snow, and in a flash was sliding down a steep slope of pine needles towards the gorge on our right. Reaching the end of the slope, where it fell away on a cliff, his skis caught on some bushes and turned him head downwards - and he fell over the brink.

There followed an awful silence, and I began to panic. Leaving all my gear, I made my way, clinging insecurely to branches to a point where I could see over the edge. There he lay, quite still, stretched out face downwards. I shouted several times, but he did not stir. Searching around. I found a possible way down and, somehow or other, managed to climb down into the gorge. When I came on him. what was my relief to see him half sitting up, gazing dazedly around, very concussed and talking gibberish. But he was alive, apparently without any fractures, though he complained of pain in his back.

The problem was how, and where to get help. We could not go back the way we had come; the only chance was to continue down the narrow gorge, in the hope of getting safely into the Ferozepur Nala. Leaving all our equipment, we started down, myself supporting Ricky over my shoulder.

It was, indeed a nightmare journey, plunging through the snow crust, trying to avoid falling into the stream; not knowing whether we might be stopped by impassable ground. But somehow, we did get down that gorge and struck the path by which we reached Tangmarg; it must have been a journey of about six miles. I put Ricky to bed in the Dak bungalow and phoned for a car. I left him in hospital at Srinagar, and returned wearily to Gulmarg.

So once again I was on my own. For the next week or so. I left my tent in a side nala above the main Ferozepur river, climbed some 4000 feet (my journal records a climbing speed of 2500 feet an hour!); then skimmed down on the perfect snow surface back to camp. A welcome visitor during those lonely days was a Kashmiri fisherman, who plodded up several times with delicious snow trout, which he caught with his trident spear.

My last visit to Khilanmarg was in April, 1935. Wishing to test equipment for the K36 (Saltoro) Expedition, 1 spent a night in the new hut, a stout log cabin sited much lower than the old hut, at the upper fringe of the forest.

In the night a fearful blizzard began to blow. My tent was soon buried in the snow, and I had to spend the rest of the night in , the hut; it was miserably damp and cold. Later, in a blinding snow storm, I packed up and returned to Srinagar.

One of the pleasures of that visit was my reunion with the old chowkidar. It was the last time I saw him, for the following year this hut, strongly built and apparently safely located, was overwhelmed by an avalanche, killing my friend and three army officers who were there on leave.

SUMMARY
Recalling visits to the Pir Panjal in the thirties. 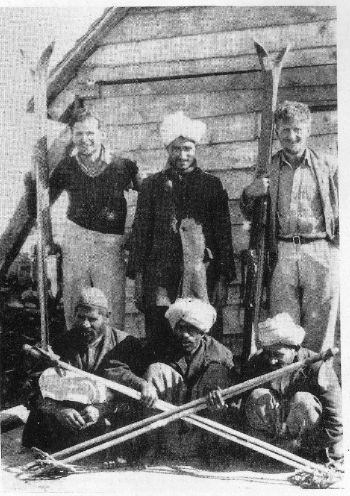 John Hunt and companions in the Pir Panjal. (John Hunt)