IF YOU ASKED a child to paint you a picture of a mountain, he would do Haramosh II.

During the summer of 1994, Brian Davison and myself stood on a small peak in the western Karakoram and looked around. The majority of climbers are conservative, and go for the biggest and most famous mountains, so amazingly, most of the myriad of peaks we saw are still unclimbed. The one that most caught our eyes was to the south. We saw an unknown mountain, a sharp peak of snow and ice gleaming white in the sun against a perfect blue sky. This was a fairy-tale mountain, and we had the childlike wish to climb it. Back home, we discovered what it was, and that it was unclimbed. Plans were made for the following summer. Later, we enrolled Paul Nunn, Geoff Tier and Colin Wells to share this dream. We arrived in Pakistan in the first week of July.

A month later, we relaxed happily in our tents in the afternoon sun, dozing and drinking endless mugs of tea. We had just returned from the 6666 m summit to our high camp at 5700 m, tired but content after the day's efforts, and felt we had a right to be. We had dragged our weary selves up the top thousand metres of our mountain, and staggered down again, and our two friends were about to join us. We had been able to see them for over an hour; they had now passed from sight behind a bump in the ridge above the tents, but we could hear the sounds of their voices as they got closer. 'We' were myself, Brian and Colin, and 'our friends' were Paul and Geoff.

I lounged back spinning my umpteenth brew, feeling like a lump of partially reconstituted instant mash. I heard sounds from the other tent, Brian's stove purring yet again; tea for the lads. Thishad been a good expedition. Unlike many better-funded trips nowadays, we had done it all by ourselves - none of the use of 'tour operators' or 'trekking agents' to buy our supplies, organise our transport, hire our porters, and empty our wallets. While Geoff and myself, the advanced party, were hassling with the organisation in 'Pindi', we were approached by a plausible character, Ghulam Nabi, touting for work as a head porter. A good head porter is, of course, well worth his salt, in saving porter over-charging and other bother. But a bad one is worse than useless. So, was this one good or bad? While we were thus contemplating the unknown, the others arrived in town, and Paul and Nabi greeted each other as old and trusted friends with a mighty bear hug. We had found our head porter.

We had perfect weather on the walk-in, and for long enough to get a view of our line. Haramosh II's northwest side looked distinctly climbable, but not specially safe, except by the line we had spotted.

We had virtually done the route already in our heads, but before we could try it in reality, the weather took a turn, with rain and snow for ten days. Suspension of animation was needed. I was fortunate to share a base camp tent with Paul. This did not give me a relaxing period of stasis, but an interesting one. His convoluted arguments and credibility-stretching opinions were, as always, a bizarre mixture of mental stimulation and infuriating drain on patience. This was a trying period of waiting, enlivened towards the end by our home-brewed beer reaching the state of 'drinkable' (just about), and by a few amusing incidents.

One of these was a bit of 'reverse portering'. We had carried some food and tents up the glacier; two days later, we were annoyed to find them at another, much lower place. Back at base camp we found out that there were some outsiders trespassing in the valley. A group of men from Sassi, a village in the Indus valley, had crossed the Haramosh la, a 5000 m high pass looking for gems, a popular pass-time since the government had relaxed its prospecting laws. This seems to be the local equivalent of our national lottery; you may be unlucky and get nothing; but just as likely, you could find a semi-precious amethyst or garnet (rather like recouping lottery stakes with a £10 prize); then there was the dream of a jackpot, finding a big emerald would make them rich beyond their comprehension. But these men had found our gear, and imaging it to be abandoned by a previous year's trip, they had claimed it as fair swag and carried it down to take home later. But lower down the glacier, they found a bigger dump of ours, realised their mistake, and left it there. We were glad of this relative honesty. During the bad spell, they were stranded by the weather, and could not return over the pass because of the snow, nor retreat down the valley past their tribal enemies from this side. They were dependent on their limited means and ability to live off the land. They were too proud to beg food and shelter from us, and we had not the resources to give them much. We could spare them a brew or two and a drop of paraffin to light their fires of damp dwarf willow. They had a gun, and shot an ibex to survive. As conciliation for moving our things, they gave us three days' supply of the meat, a delicious and welcome variation to our diet. This generous gesture may have been altruistic, but later on we heard a story which offered a more cynical and perhaps a more realistic explanation. A few years ago, an expedition's base camp had been looted in their absence, with much money stolen. The Sassi men were strongly suspected. The police visited them and made inquiries but no individual suspects emerged, so every man in the village was beaten up by the police. They did not want that again. 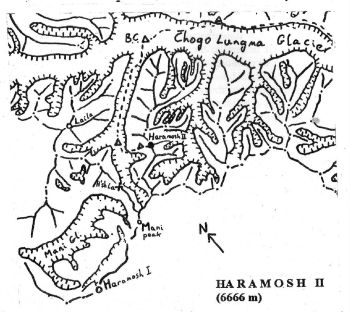 Then one afternoon, the weather relented, and the mountains re-appeared covered afresh with white. Next morning, we trudged back up the glacier, through the fresh snow, to our advanced base camp, to find that our cached food had been seriously ravened. These big black birds are a serious menace in this region, one we had paid too little attention to. They have huge appetites, cheek to match, and beaks with the pecking power to make short work of our several layers of cardboard, polythene and sackcloth. The only foods to survive intact were the tinned, and the buried under rocky cairns. But we could bring more up next time, for we had no intention of completing the route this time. The two thousand metres to the top were too much for our fitness and acclimatisation to take. Next day, Brian, Colin and I did a reconnaissance and food carry a quarter of the way up. Paul and Geoff were not well, and stayed behind, Paul with a cold and Geoff with indigestion and vomiting. This was later to be the cause their demise.

My day dreaming changed to more recent days. What a trip! After all the usual expedition hassles, we had succeeded - all of us had got to the top. In my smug, dozy sort of state, I had forgotten that such self-congratulations are out of order until you get back down.

And an interesting route it had been, in a not too technical exploratory sort of way. Our face looked rather like Mont Blanc's Brenva face, with plenty of very dangerous falling seracs. But as with its alpine likeness, this face had a relatively safe line following a disjointed spur which avoided all the danger ... well, most of it.

The climbing was also reminiscent of the Brenva face. We only wore ropes where bergschrunds and crevasses threatened non-climbing crust-breaking falls to their icy subterranean depths. Otherwise we made it safer by climbing unroped.

Being a west face was a safe feature - the sun did not hit it till later in the day, giving ample time to get out of the way of any potential snow avalanches or rockfall. Serac fall is a different matter and can happen at any time of day or night. But our line was safe from serac fall....except for a little bit just above the camp. Here, we'd had to run the gauntlet under some fairly innocuous looking ice cliffs, which had not fallen while we'd been around to watch. The lads would only take a few minutes to get past this danger zone, and they'd be safely with us. Then we could all look forward to a relaxing homeward journey.

My reverie was shattered by a loud crash: another serac breaking off. Presumably, one of the usual ones to left or right. Brian was first to pop his head out: 'this looks like the one over the route'. As the noise died away, our friends' voices did not start again. We snapped out of our complacency, and rushed up the ridge to where we could see. There was no sound or sight of them, just a chaos of massive jumbled blocks of ice, and a deathly silence. We shouted their names but the mountain mocked us with its inhuman silence. We stood speechless, unable for some minutes to fully believe the obvious truth. We had to face the awful reality that we could do nothing at all to help them. But at least their end would have been rapid with such a weight of debris burying them; and this was a fitting grave, high on a wild and remote mountain.

More snowy weather then stranded us for two days at this top camp, before we could escape back down, and start the long, sad homeward journey. For the next two weeks, my morning awakenings were plagued by a strange half-disbelief. In my semi-awakened state, I found difficulty in knowing whether this had really happened, or was it a nightmare? Only later, when I was completely conscious, did I come to fully re-know the dreadful truth.

Five months later, I can try to lookback a little more dispassionately. My dead friends are two of the best you could wish for, and their loss is inconsolable. But unlike some types of climbing, big mountains have not been made safe by technology, they remain an adventure. We would not wish it otherwise. Paul and Geoff were intelligent men; they knew the risks, and accepted them as part of something they loved. So, sad though we are, we also must accept the consequences of their adventuring. 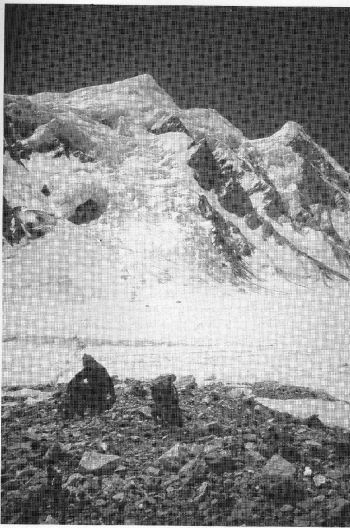 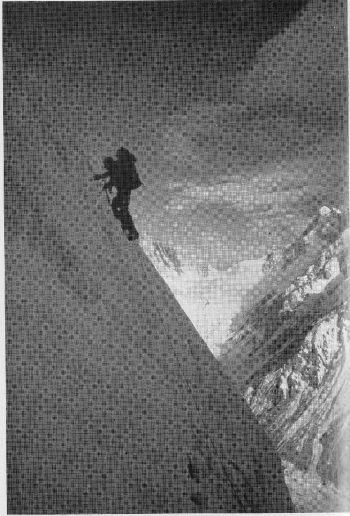