ON 10 MAY 1994 at 1030 1ST, the radio set at Camp 2 and base camp crackled with life. 12 soldier-mountaineers were slowly making history. Each laboured step took them closer to a divine destiny. At 1030 a.m. they stood atop, the 7338 m Kabru North (Kabru II) in the Sikkim Himalaya. The Indian Tricolour and flags of the Army and the High Altitude warfare School fluttered majestically in perfect unison, for another chapter was added to the history of Indian mountaineering.

These soldiers stood on the summit after a time gap of 59 years. Success had finally come after days of perseverance, inching through the formidable, highly unstable Kabru icefall, with only their tenacity surmounting the numerous pitfalls of their chosen route. On 12 and 13 May the mountain Gods once more relented, when the hitherto unclimbed Kabru South (Kabru I) and Kabru III were scaled by yet two more teams, there by recording a first ascent of this legendary mountain of the Eastern Himalaya.

The Kabru massif is located in northwest Sikkim. This prominent group of peaks lies on the continuation of the Kangchenjunga- Talung ridge in the Singalila range of the Sikkim Himalaya. To the west lie Makalu, Everest and to the east lie Zemu gap and Kangchenjunga apart from Simvo and Chombu. The Kabru massif itself consists of Kabru South, Kabru North, Kabru III and Kabru Dome.

The expedition to Kabru was conceived and planned by the Directorate General of Military Training (DGMT). The venture was executed under the overall aegis of the Army Adventure Cell, Indian Army. The expedition was to be precursor to a possible Indian Army attempt on Kangchenjunga and Kamet from the west ridge, being planned in 1995.

The army team with the exception of few, primarily comprised of members from Crack Infantry Regiments of the Indian Army. The team was spearheaded, mainly by current or former Mountain Warfare instructors of the High Altitude Warfare School (HAW), most of whom apart from having a rich combat experience of operating in mountains, were also seasoned mountaineers. The expedition was led by Col. H. S. Chauhan of the Indian Army.

Kabru literally means the 'White Avalanche' peak (Ka means 'white' and bru means 'avalanche'). The mountain has an elusive background. Poised majestically in the Singalila range of the Sikkim Himalaya, these mountains owing to their awesome proportions and formidable approaches, have remained mostly elusive till date, seldom attempted by mountaineers in the recent times.

The first recorded attempt to scale these peaks was believed to be done by Graham in 1883. But his claim was refuted by Sir Martin Conway, who believed that Graham carried no instruments and made no observation for positions, but merely believed that the peak he climbed was Kabru. In October 1907, in a remarkable but a little known ascent, a Norwegian pair consisting of C. W. Rubenson and Monrad Aag made a spirited attempt from the Rathong glacier. They were able to cross the Kabru icefall and reach the saddle joining the two summits. However, just as they were 50 m below the North summit, their attempt was foiled by intense cold and high winds. In 1953 C. R. Cooks made a remarkable first ascent of the North peak. This ascent had not been repeated, while Kabru South still awaited its first ascent. These mountains thus posed a formidable challenge.

The team reached Siliguri on 9 April and established roadhead camp at Yoksum, west Sikkim on 11 April. The expedition further established two intermediate camps at Bakhim (2750 m) and Jamlingaom (3650 m) before establishing base camp at Chaurikhang at 4360 m. Advance base camp (ABC) was further established on 17 April (4940 m) next to the serene and the sacred waters of Omine Chu lake.

Camp 1 was established on 21 April on the Kabru glacier at 5550 m. This camp was established on a snowfield directly under the south ridge of Kabru Dome, the lowest, but no mean mountain of the Kabru massif. Declared now as a holy mountain by the Govt, of Sikkim, this mountain was first climbed by the Indian pre-Everest Expedition led by Brig. D. K. Khullar and later by joint team of the Indo-French Armies led by Col. Balwant Sandhu in 1985. Our team bowed in reverence to this holy mountain. The route from ABC entailed moving up the steep couloir overlooking the Kabru glacier, and thereafter traversing directly northeast to the snowfield on which Camp 1 was established. Camp 1 was finally occupied on 22 April.

Camp 2 (5860 m) was established on the upper Kabru glacier on 23 April. This camp was located on a snowfield on the southwest ridge of Kabru Dome. The route to Camp 2 took two days to open. 13 ropes were fixed as the complete segment of the glacier under the southern slopes of Kabru Dome had to be traversed. The route was dangerously exposed to falling rocks, overhanging seracs with icicles frequently jetting down the southwestern slopes dominating the glacier. Almost 300 m of initial rock and then snow had to be ascended before the snowfield on southwest ridge of the Kabru Dome could be gained. This snowfield was relatively the only safe sanctuary in the otherwise dangerously avalanche-prone slopes of Kabru South, Kabru Dome and the formidable Kabru icefall itself. Camp 2 was finally occupied on 27 April.

The route to Camp 3, was opened through the hazardous and the fast moving Kabru icefall. In fact the initial crux of our climb lay in the negotiating this prohibitively fearful icefall. This icefall in all probabilities had thwarted numerous expeditions, perhaps even the 'thought' of attempting the mountain through this route. The route entailed a full exposure to the unstable seracs of the icefall, a complex maze of chasms, and delicate snow bridges spanning seemingly never ending, near bottomless crevasses. Above all the complete climbing arena was itself threatened by the ever lurking dangers of massive ice avalanches which break-off from the faces of Kabru South and Kabru Dome. Each time the members stepped into the icefall, they stood a good chance of never returning. The route took 6 full working days to open and a total of 75 rope lengths were fixed. Camp 3 was finally established on 7 May at 6580 m.

Camp 3 was established on an icefield to the south of the base of the ice wall, joining Kabru South and North. The camp, which was almost in line with the summit of Kabru Dome, was fully exposed to the fury of the winds, with the wind-chill extracting its toll of the climber's efficiency. Camp 3 was finally occupied on 9 May, despite the hostile prevailing winds, which made further progress on the mountain painstakingly laborious and progressively difficult.

Our route through the Kabru icefall, must have at places coincided with the Norwegian route of 1907 and Cooke's route of 1935. The face of the icefall has in all probability undergone a drastic change in the last 59 years, altering it considerably.

The second crux of our climb lay in gaining the saddle between Kabru South and Kabru North. The route from Camp 3 moved up along the icefield to the foot of the ice wall. The ice wall itself measured almost 450 m of snow and ice, which finally led to the ice plateau on the Nepalese side. The saddle was finally gained on 10 May for which another 30 ropes were fixed from Camp 3 onwards. The great and the last barrier was finally overcome.

Team I, under 2/Lt. S. Bhogotra and Subedar Ramphal and 10 members commenced its move at 0445 hrs. on 10 August from Camp 2. The team took 75 minutes to traverse the icefield and another 30 minutes to reach the high point of 9 May by negotiating 5 fixed ropes of the previous day. Another 2 ropes were fixed on the ice wall, before the saddle between Kabru North and Kabru South peaks could be gained. Approaching Kabru North from the South, the team finally traversed 3 bumps, the third bump towards the North being the highest of the three. The team reached the summit of North peak at 1030 hrs. A sense of emotion overwhelmed them and the entire team, which rejoiced at this success. 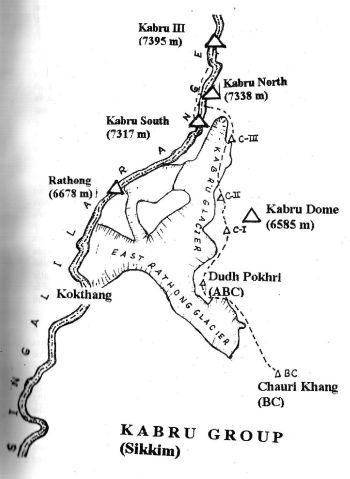 Kabru South, the most majestic and dominating peak of the massif received its first ascent by 13 members under Capt. S. P. Malik and Capt. N. Arshad on 12 May and by 14 members under Maj. A. B. Goth and Capt. A. Abbey on 13 May. En route to Kabru South, the team was lashed by 'ferocious winds' and spindrift conditions from the Nepalese side. The Kabru South summit in contrast to the Kabru North is a cornice. The peak itself is about 1100 m southwest of the high point, where the saddle was gained. Spectacular views of Kangbachen, Kangchenjunga and the Sikkim and the Nepalese Himalaya could be viewed by members who were awed by their grandeur.

The summit of Kabru III lies tucked away further to the northwest of Kabru North. The peak lies at the apex of the snow plateau where the ridge coming from Talung broadens into the plateau which lies further to the west of the saddle from between the Kabru North and South peaks. The summit has two bumps - 'hat shaped' (double bump) and an 'egg shaped'. As Naib Subedar Devi Singh described "There is a sheer drop from Kabru III towards Kangchenjunga. The gap between Kabru III and Talung along the Singalila ridge line is not too much and to my mind it is technically possible to traverse from Kabru III to Talung. The summit profile of Talung towards Kabru III is corniced with room for not more than 2 to 3 climbers, to stand on the summit."

On 12 May a massive ice avalanche triggered from collapsing seracs from the southeastern face of Kabru South, enveloped the upper portion of the Kabru icefall and the snow plateau. To the good luck of the expedition there was no movement at that time between Camp 2 and 3. The avalanche altered our route completely and the route had perforce to be realigned. However this proved futile, as another massive ice avalanche on 14 May turned the vast amphitheatre into a killing arena thereby rendering any movement in the Kabru icefall absolutely unsafe. After the safe descent of team 3 under Maj. A. B. Goth, Capt. A. Abbey and Naib Subedar Devi Singh, the leader aborted the idea of any further attempts on the mountain.

A very important aspect of this expedition was preserving the ecological sanctity of the mountain. Special care was taken to ensure that all organic and inorganic waste was disposed of in a correct manner, thereby preventing any ecological imbalance. The expedition also endeavoured to cart back own and all possible litter left by previous expeditions.

The Indian army expedition to Kabru recorded the first ascent of Kabru South and Kabru III and recorded the first Indian ascent of Kabru North. The Gods were indeed kind! They had permitted these valiant men in olive greens to intrude their divine domain and in all their magnanimity blessed them to survive the numerous pitfalls of this legendary mountain of the Sikkim Himalaya.

An Indian Army team made ascents of several peaks in the Sikkim Himalaya in May 1994. (* first ascents)
[1] The mountain can be approached through any of the three glaciers, namely the Yalung, Tailing and the Kabru glaciers. 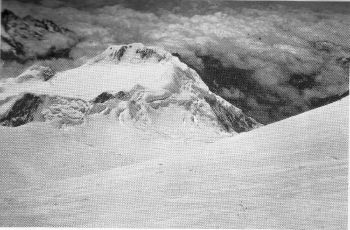 Kabru Dome, seen from the saddle between Kabru North and South. (Maj. A. Abbey) 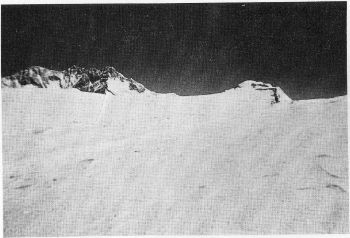 Kabru North (right ) from snow plateau and Kangchenjunga. (A. Abbey)