CURIOUSLY, THE west face of Manaslu has always remained sheltered from the sight of climbers while other comparable faces, such as the south face of Annapurna, those of Dhaulagiri and Nanga Parbat, have attracted numerous expeditions. Its remote location at the head of the forbidding Dudh Khola valley, which keeps it from being seen from anywhere else, may explain in part this lack of interest.

Tilman was one of the rare climbers to comment in the fifties on this face which he summed up with the discouraging judgment: 'impossible without wings'. In 1971 a heavy Japanese expedition of eleven members ascended the Dudh Khola and climbed the northwest ridge, establishing five camps.

However the problem of the west face remained. It is one of the highest faces in the Himalaya since it rises some 13,000 ft above the wooded moraines of the lowest Nepalese glaciers to a' height of 24,600 ft (7500' m) on the edge of a vast two-mile-long plateau which leads to Manaslu's summit. The face is complex, without any obvious route of ascent, with numerous serac barriers, rock spurs that lead nowhere and., icy couloirs which collect avalanches.

What impressed us most when we examined the only photograph we could find was a threatening serac barrier which overhung the whole width of the face and seemed to prevent access to the summit plateau.

It was doubtless while arriving at the top of the southwest buttress of Dhaulagiri in the fall of 1980' that Bernard Muller and I decided to organize for ourselves a lightweight expedition to a major Himalayan face. I was still slightly bitter from our experience on Dhaulagiri, where Bernard and I had climbed a fantastic buttress without getting to the summit because of the violent winds which swept the upper slopes. The experience had hardly been positive and I wanted a more rewarding adventure.

I have the feeling that it was a bit by chance that this wall on Manaslu, which was so well suited to our dreams of adventure, fell into our hands; a single photograph and no precise information led us into this serious undertaking of which the outcome was uncertain.

One fine August day we set out after months of preparation and often vain missteps. We are Bernard Muller, Dr Dominique Chaix, Gerard Bretin and I, a very united group: four accomplices and a single passion! On 25 August we leave Dumre, a soulless village on the Kathmandu-Pokhara road. With fifty-odd porters, we cross the first monsoon-drowned rivers. Under a leaden sky, stupefied by burning 'heat which no breath of air relieves, we drag ourselves from tea-shop to tea-shop. Along the trekkers' royal road, everything is done for the Westerner's comfort; traps for the tourist, signs in English, inns which offer shelter and ^ the local cuisine adapted to Western tastes, not forgetting the Coca-Cola! Kids assail the tourist, hoping for a hand-out or ready to sell the wares of local artisans. Insidiously the Nepalese are selling their souls.

Soon the hills around us became bolder. The calm order of the rice fields disappears, replaced by fields of grain. Before us, the Marsyandi Khola flows from a deep gorge through the domain of steep hills where villages become rare. From here on, we will be in a Tibetan land.

On 1 September we leave the travelled tourist road that leads to Manang to enter the forbidding Dudh, Khola valley. While crossing the Tonje bridge, which gives access, I have the feeling that I am stepping across the frontier into a territory under the spell of a mysterious witchcraft emerging from that mountain face that the monsoon mists, hide from our eyes. Were the prayer flags waving lazily in- a peaceful breeze at the entrance of the village the emblems of this unknown land that is opening before us? At nightfall we reach Tilje, the Dudh Khola's last village: a sinister vision of a few houses surrounded by stagnant smoke that is pierced by the flickering light of oil lamps. To the stranger which I am, they call attention to the fact that this is no phantom village despite the very silence. I am aware of ragged Tibetans that come to surround us with their faces besmirched with the melancholy of the place.

Beyond, we advance slowly through luxuriant vegetation, saturated with humidity, through which no path furrows. The rains never stop, as if, the closer we get to the mountain, the more an evil spirit wants to turn us back. Finally on 4 September we place base camp at 12,000 ft on a grassy slope that descends from the first ramparts of the west face. As the mists swirl, dark and vague forms appear like pieces of a puzzle whose whole picture we are anxious to see. Finally, one morning, the face which our imaginations had left too long indefinite, stands out clear, totally unveiled, austere and cold.

Our first days on the mountain are marked by discouragement. We do not discover any route sheltered from, the avalanches which continually sweep the face. The whole lower part is defended by seemingly unclimbable ramparts, shining with moisture, grassy in spots or rising into seracs. On 6 September we go back up to the cache we left the day before. We don't recognize the place which has been swept by a huge snow-slide. For two days we dig veritable trenches in this mass of frozen snow, but in vain. The snow cover is fifteen feet deep. Around us, the avalanche cones have not spared the least speck of the surface of the glacier. No campsite seems safe. Into what kind of a trap have we come? Would there be any hope of climbing the face without playing Russian Roulette? Somber fore- bodings nearly end in our giving the climb up: hope shattered against inflexible reality.

By some inexplicable change of mind, our adventure goes on. From now on, we shall climb' only at night or very early in the morning.

Above advanced base camp, we progress with difficulty up snow and ice-slopes of more- than 50°. Snow slides regularly carry away our fixed ropes. In desperation we decide not to replace them. For Camp 1 we decide on the only site, at 18,700 ft under the protection of a rock tower. We succeed in scratching out a narrow ledge in the ice.

Nowhere else could we feel so isolated from the world. Wherever we look, there is not the slightest trace of human beings. The only sound of the world is the constant grumbling of the waters of the Dudh Khola, at times drowned out by the crashing of avalanches. From these days we keep only the memory of nervous tension, of a kind of permanent anguish.

Starting on 20 September, we undertake the most difficult part of the route: 3500 ft of climbing comparable to the hardest faces in the Alps, with ice or mixed ice-and-snow steps of more than 70°. We attack a huge, nearly - vertical dihedral, which is- periodically swept by rockfall in this precipitous terrain we can not find the smallest ledge to ease the severity of the route. Soon we reach a zone of smooth slabs covered by a thin film of ice. The high stakes at this key spot shove me to risk a serious fall. My crampons claw disagreeably at the rock. I move upward without a valid belay.

After six days of effort on these austere slopes, we are relieved to reach a secondary ridge which rejoins the face at 22,000 ft. This will be Camp 2. Suddenly, during the night of 27 September, a violent storm strikes central Nepal. Whole valleys are flooded, villages destroyed; some 1500 people die. From Camp 2 Bernard and I flee from the windswept ridge and swirling snow. We have- to reach the lower camps before avalanches let loose and turn the face into a gigantic soup-tureen. In the milky light of the growing tempest, we slide down ropes in the couloir that leads to Camp 1: 3500 ft of hallucinating descent. We move down the abyss which gapes at our feet in a' moving mass of fog hanging to the cliff. The snow slides, which seem to be born in the breast of this mass, converge ' on our. couloir before disappearing below. Soon we. are' plowing through snow up to our waists. As he leads, Bernard has to extract the ropes from the snow. Hours pass. We descend too slowly and fear that the wall has us trapped.

A rumbling continues, terrifying, impossible to locate. We wish we could pierce the dense storm to see, even for an instant, all the avalanche-swept slopes. We agonize, feeling threatened and blinded. In the uniformly white void, the dark lines of our ropes give us a sketchy orientation. We rely on them to keep from complete bewilderment, to guide us to a secure spot. Our thoughts flee from this sinister place, from this confusion, from the damp cold that cuts through us. Suddenly, from Camp 1, Ang Kami and Lakpa catch sight of two silhouettes that emerge through the snow squalls at the foot of the couloir. It is noon. 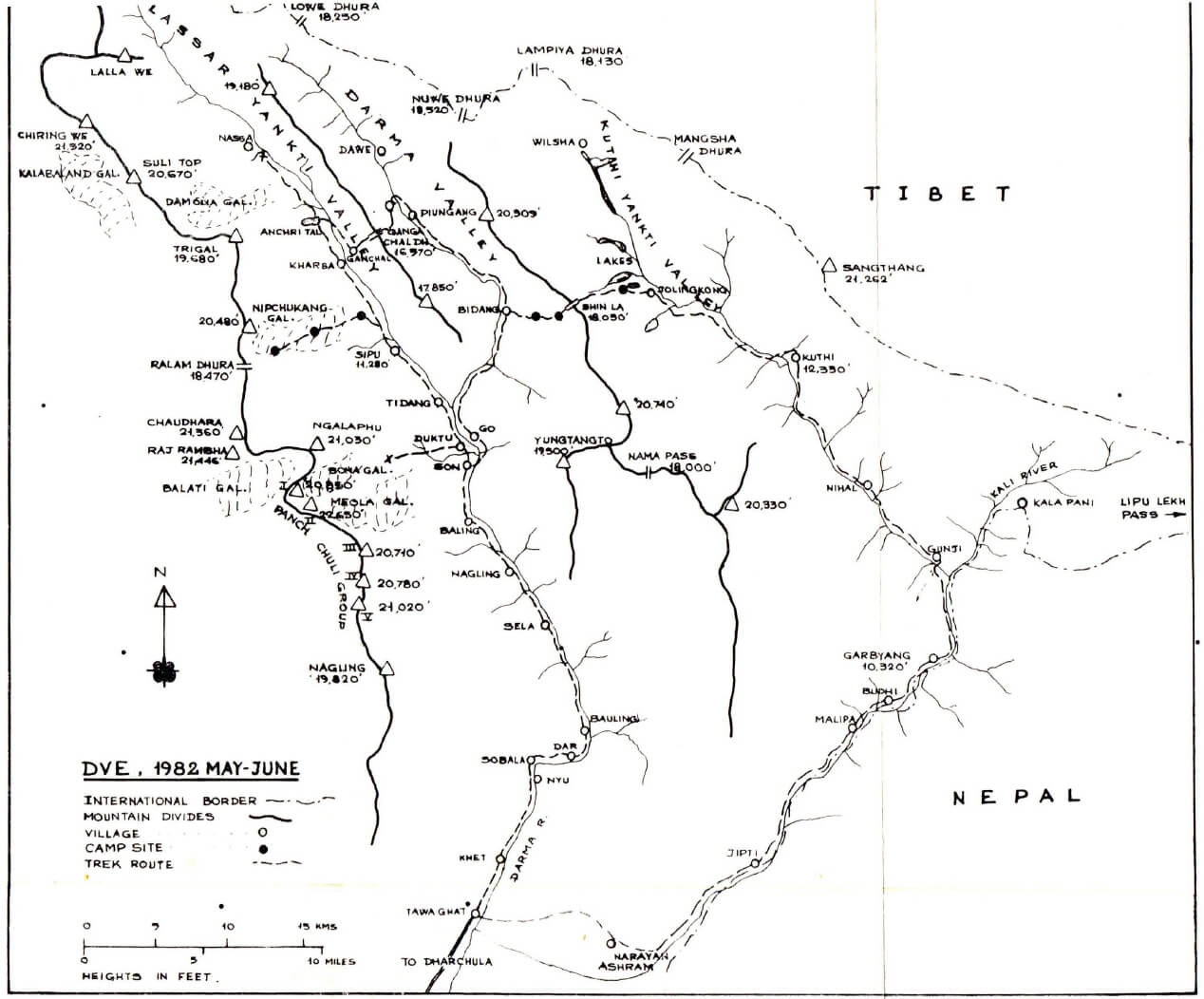 Amazed by the quantity of snow that has fallen in a few hours, we decide to evacuate all the camps and seek refuge in base camp It is rare for snow to fall at this season down to 10,000 ft. Under the weight of the snow, the shelter the Sherpas have built has collapsed. We worry about all our tents and the ropes left on the face. We fear that the storm will have totally wiped out all our efforts of the past weeks.

On 30 September we wake up under a brilliant sky. The west face is unbelievably plastered with fresh snow; the violent wind drives the snow into long plumes. The autumn has come, clear but icy cold. There is work to be done: hours of trail breaking, camps to clear of snow, fixed ropes to pull out of the snow. This would have been the time for a huge expedition!

On 4 October Bernard, Gerard and I are back at Camp 2. We know that we have to try for the summit before the winds from Tibet become too painful. On the 6th Bernard and I leave for the top, heavily loaded. We ascend the steep couloir on hard snow, like Whymper on the Aiguille Verte. The altitude obliges us to progress slowly up slopes where the slightest fault would not be pardoned. After crossing the last zone of seracs, we set foot on the summit plateau. Sheltered from the wind, we pitch the bivouac tent at 24,600 ft...

The night lasts too many hours. Sleep is cut by instants of sudden wakefulness as if the cold and discomfort were coming regularly to make us take stock. Just before dawn, as we see a diffuse glow filter through the tent fabric, we put an end to this painful bivouac.

Preparing to leave takes forever and not until six o'clock are we ready to head for the summit. We wander across this plateau which lacks landmarks, covered with curious tube-like snow formations, sculptured by the wind. These force us to exasperating detours. In my mind, deadened" by the lack of oxygen, fleeting half-formed ideas file past. Yet at each stop, I dream only of the next meters I must cover. Toward noon, beyond a particularly airy snow ridge, we reach Manaslu's narrow summit. On this spot, lost from the world, I seem to have arrived at the frontier of time which comes to close a. strong episode of my life and beyond which the future now extends, which, perhaps from superstition, I had voluntarily left in the shadows. 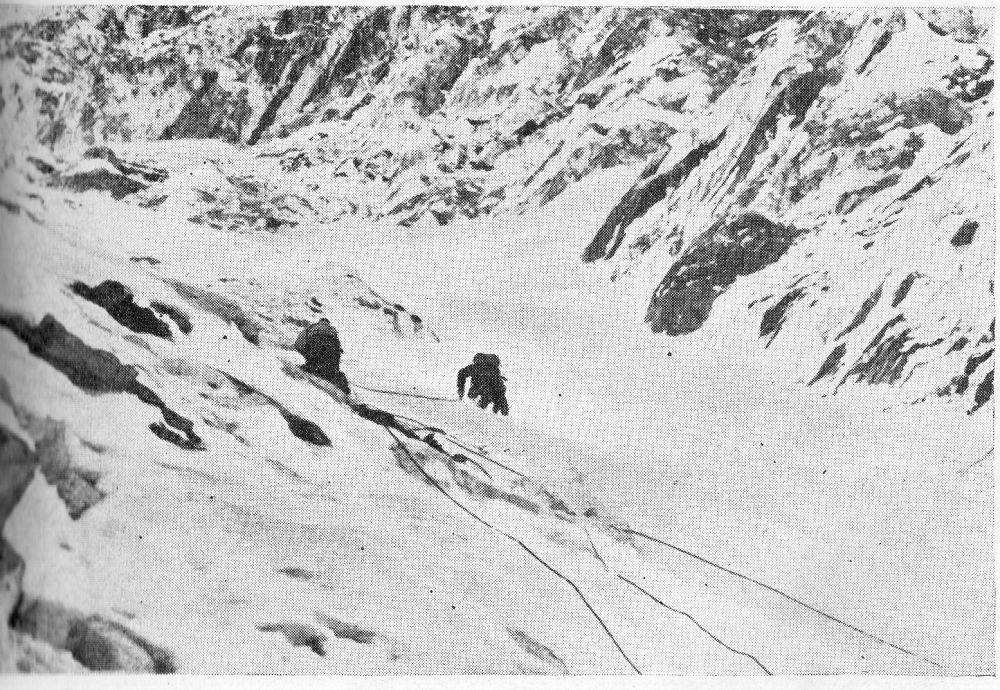 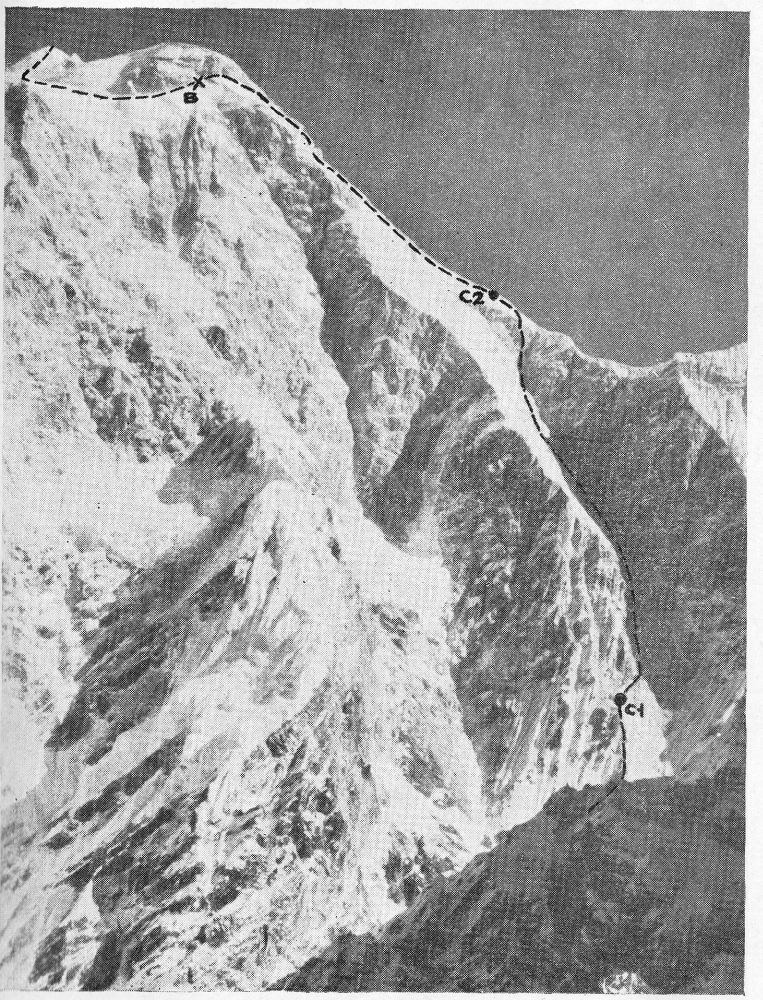