THE FOUNDING OF THE HIMALAYAN CLUB 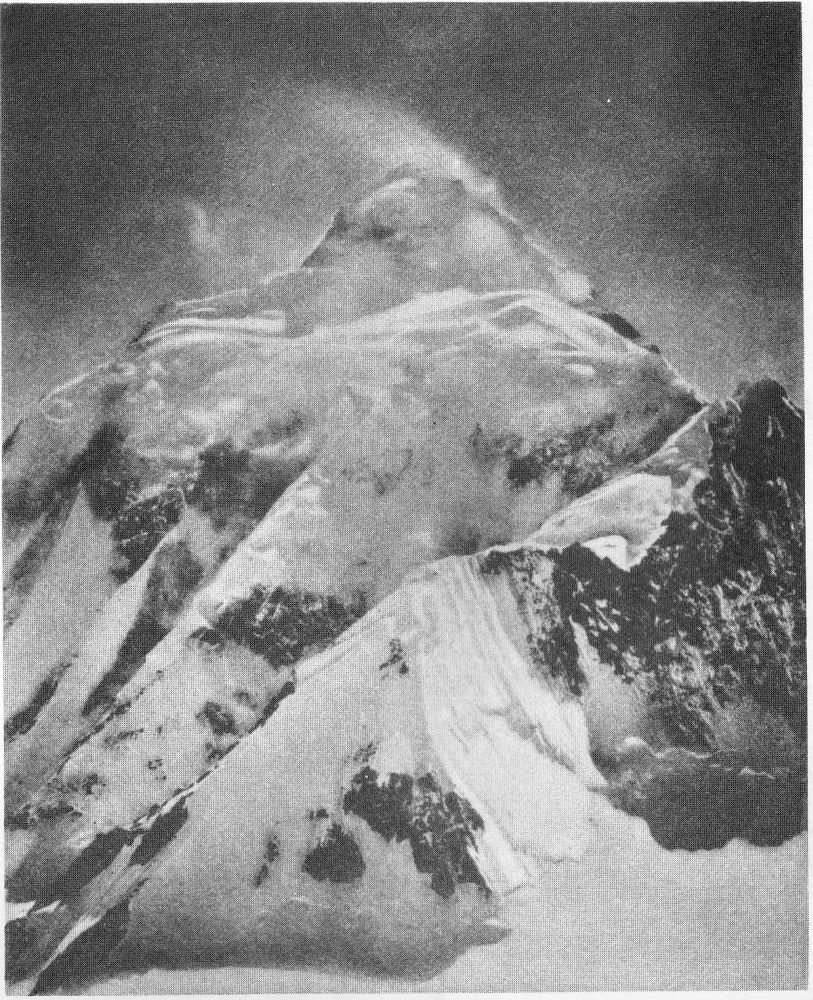 K2 FROM THE NORTH EAST.

MR. DOUGLAS FRESHFIELD tells me that the idea of a Himalayan Club goes back so far as 1866, when it was formally suggested to the Asiatic Society of Bengal by Mr. F. Drew and Mr. W .H. Johnson. And Mr. Fresh field himself, writing in The Alpine Journal in 1884, advised that our knowledge of the Himalaya might thus be extended. " The formation at Calcutta or Simla," he said, " of an Himalayan Club, prepared to publish Narratives of Science and Adventure' concerning the mountains, would be the most serviceable means to this end." The idea must have recurred to many, but it never took shape, not because a Club was not wanted, but because in this land of endlessness it is only now and then that the two or three are gathered together. The thing had hung in the balance for years when a chance talk at Simla tipped the beam, and the Himalayan Club was born on the path behind Jakko on the afternoon of the 6th October, 1927.

I wrote first to Major Kenneth Mason of the Survey of India, who also had long cherished the hope of a Club ; to Major-General Walter Kirke, then acting as Chief of the General Staff ; and to Brigadier E. A. Tandy, Surveyor General of India. I was diffident, for there seemed no reason why the time should now be fulfilled. Mason replied that he was with me heart and soul; Kirke that he would do anything he could to help ; Tandy that he would help in any way he could. So encouraged, I went ahead. The Viceroy, Lord Irwin, the Commander-in-Chief, Field-Marshal Sir William Bird wood, and Sir Malcolm Hailey, then Governor of the Punjab, were among the first to whom . I told our plans. Others were Mr. T. E. T. Upton, Solicitor to the Government of India; Sir Edwin Pascoe, Director of the Geological Survey of India; Major-General Kenneth Wigram and Brigadier W. L. 0. Twiss who still, they say, count for something among Gurkhas; Mr. G. Mackworth Young, Army Secretary; and Mr J. G. Acheson, Deputy Foreign Secretary. Mason meanwhile had consulted Major E. 0. Wheeler of the Survey of India, and Captain J. G. Bruce, 6th Gurkhas. These were the founders of the Himalayan Club, and it is to their confidence and sound judgment that the Club owes its constitution. There were three others who had no claim to be members of the Club, but whose interest and advice meant much to us : the Foreign Secretary, Sir Denys Bray ; the Education Secretary Mr. J. W. Bhore, who included in his Department the Survey of India ; and the Private Secretary to the Viceroy, Mr George Cunningham. It was Denny Bray who determined the quality of our founder members : " What you want," he said, "is a solid core of men who have done things."

We proceeded deliberately, remembering always that it's the first step that counts. There were three things to be decided : What should the Club be called ? What should be its objects ? Who should be asked to become founder members ? The name of the Club was soon settled. " The Alpine Club of India " had been suggested, but seemed likely to scare those whose interest was not high mountaineering ; nor had we need to look for a name beyond our own great range. Almost from the first we thought of ourselves as "The Himalayan Club. It was agreed that our objects should be based on the famous definition in the Rules of the Alpine Club. But it is shikar that first impels nine-tenths of those who go to the Himalaya ; and though we were unwilling to admit shikar as a specific object of the Club we thought that our objects should recognise that knowledge of the Himalaya is extended through " sport," which would cover mountain climbing and ski-running as well as shikar. In this way we arrived at our definition :—

" To encourage and assist Himalayan travel and exploration, and to extend knowledge of the Himalaya and adjoining mountain ranges through science, art, literature and sport."

The list of those who should be asked to become founder members, was anxiously and carefully compiled. Our intention was to include everyone who had " done things in the Himalaya; and if anyone was inadvertently omitted, I hope he will forgive and join us now. On the 20th December, 1927, Mason and I sent out our circular letter, and then we waited apprehensively for the replies. We had never dared to hope for such a response. From all over India and beyond, and from the back of beyond, from Europe, Africa and America, replies came welcoming the Club and making varied and valuable suggestions. Almost everyone replied, and almost everyone who replied became a founder member. Our 127 founder members contribute to the objects of the Club much that there is of Himalayan knowledge and experience. The Club was formally inaugurated at a meeting held in Field-Marshal Sir William Bird wood's room at Army Headquarters, Delhi, on the 17th February, 1928.

While we were still intent on our first step, we learnt that " The Mountain Club of India " had been formed at Calcutta on the 23rd September, 1927. Mason and I took an early opportunity to meet Mr. W. Allsup, its moving spirit, and it was agreed that the two Clubs should go forward with mutual good-will, and that the question of fusion should be considered later. At the inaugural meeting of the Himalayan Club it was decided to ask the Mountain Club whether it would be willing to amalgamate. A general meeting of the Mountain Club on the 14th December, 1928, agreed to amalgamate " for the benefit of the common aims of the two Clubs," and we are now one strong and united organisation. Allsup to our regret has now left India, but the combined Club will not forget how selflessly he advocated amalgamation.

We owe much too to the Alpine Club, and in particular to Colonel E. L. Strutt, the Editor of the Alpine Journal, who is also one of our founder members, and to Mr. Sydney Spencer, the Honorary Secretary. From the first and throughout I have been in close correspondence with them, and their ungrudging help and wise advice have never failed me. Members of the Alpine Club who come to the Himalaya may be sure of a warm welcome and all the assistance that the Himalayan Club can give.

And so the Himalayan Club is founded, and we hope great things of it : the geographer that the blank places on his map may be filled in ; the scientist that our knowledge of the Himalaya, its rocks and glaciers, its animals and plants, its peoples and their way of living, may continually expand ; the artist that its glories may inspire fine pictures. The mountaineer may dream of the first ascent of a thousand unclimbed peaks, the shikari of record heads shot in nalas yet unknown. My own hope is that it may help to rear a breed of men in India, hard and self-reliant, who will know how to enjoy life on the high hills.