Climbing Activities from BC construction to evacuation: 10 April: A. Stremfelj, M. Prezelj and U. Rupar climbed Boktoh (6142 m) from Ramser.

17 April: B. Pockar and V. Furlan pitched a tent below the east face of Kumbhakarna at 5400 m. M. Prezelj and D. Mesko recognized approach to enter point on southwest ridge of Kangchenjunga South. U. Rupar reached place for C2.

18 April: Porters finished transporting the equipment between Ramser and BC.

19 to 20 April: Prezelj and A. Stremfelj recce SW ridge of Kangchenjunga South from west side of Talung peak. They both climbed by a new route and M. Prezelj reached the summit of Talung peak (7349 m) 20 April 1991.

25 April: V. Groselj and S. Bozic left BC for the ascent of British route of 1955 to the summit. They waited for Sherpa ferries 3 nights at C3 due to bad weather.

30 April: V. Groselj and S. Bozic established TC4 at 7600 m M. Prezelj and A. Stremfelj reached Kangchenjunga South (8476 m) via new Sloven route on the southwest ridge and descended between South and Central Kangchenjunga to C3.

U. Rupar left C3 for the ascent of Kangchenjunga Central.

1 May: U. Rupar climbed Kangchenjunga Central (8482 m) via Polish route and descended same route to C3.

B. Pockar and V. Furlan reached the highest point at 7050 m on east face of Kumbhakarna east (7468 m) and decided to return due to bad weather.

They left east wall on 3 May morning.

3 May: M. Frantar and J. Rozman tried ascent on Kangchenjunga Main (8586 m), but they had to return 150 m below the summit due to exhaustion. They both died the following night during their descent.

5 May: R. Drzan and D. Juhant buried both bodies into a big crevasse at 7500 m. Other attempts abandoned.

9 and 10 May: Expedition evacuated to BC.

Alpine-style, without oxygen bottles. They used small tent for bivouacs.

They spent night with Marija Frantar, Joze Rdzman and Uros Rupar together.

2 May: Descent to BC. They used one oxygen bottle each. Stipe Bozic filmed this ascent upto top with movie and video camera. Viktor Groselj limbed his ninth 8000er.

29 April: Vanja Furlan abad Bojan Pockar left their tent (5400 m) ImI.,w Kumbhakarna East and they started to climb the unclimbed east face at 5530 m at 4 p.m. They continued climbing throughout the night.

2 May: From 9 to 11 a.m. they descended to the big serac and waited for better weather condition and the end of avalanche danger.

30 April: Marija Frantar and Joze Rozman left BC early morning and reached C2 in the afternoon.

1 May: C2 to C3. They took only one oxygen bottle from C3. Frantar wished to climb Kangchenjunga without oxygen. They spent the night at C3 together with Rupar, Groselj and Bozic.

2 May: C3 to C4. They planned the ascent from C4 at 10 p.m. but weather was very bad (strong cold wind) and they probably left C4 2 or 3 hours later. Exact time is unknown, because they did not use walkie-talkie all the time between C4 and the highest point.

3 May: It was the coldest and the most windy day of the expedition. M. Frantar and J. Rozman began the ascent fast, but their progress became slower from hour to hour. Weather was terrible and unsuitable for an ascent. Stormy west wind blew all day, but BC had no radio contact, because M. Frantar and J. Rozman did not use their walkie-talkie. But at 3.40 p.m. they called BC and reported that they were about 150 m below the summit, their condition was very bad, their oxygen bottle was empty and their opinions about advancing were different. M. Frantar wished to climb ahead, J. Rozman wished to go back. BC suggested them to return as soon as possible. After 10 minutes, they decided to return back. But their life power went down very fast. Two hours later at 6 p.m. their voices were very tired. They were handling their walkie-talkies with difficulty. Last radio contact was at 7 p.m. We heard only broken voices, that they didn't know where they were and which was the right way. Visibility was fine, but wind was very strong - as all day. We could not see them. They died from exhaustion and at the end they slipped down.

5 May: Robert Drzan and Dare Juhant found M. Frantar's body at 7500 m and they buried both dead friends into a big crevasse.

After that accident we stopped other climbing ascents.

The alpinists have set foot on almost all the highest peaks of the world. Only few of them have remained unconquered. One of them is Kumbhakarna East (Jannu East 7468 m). With very steep faces all around it looks really repulsive.

Therefore, this is a story of the first serious try on the east face of this mountain.

Vanja Furlan and Bojan Pocker acclimatized themselves on the normal route on Kangchenjunga Main, from south, as members of the Slovene Kangchenjunga 1991 expedition.

On 28 April they left base camp and moved close to the bottom of Jannu east face where they spent the night. Next day they crossed Jannu's east glacier and started to climb at 4 p.m. at 5530 m.

Until midnight they climbed 400 m of the face; ice 85760°, rock V and mixed ground. They proceeded with the climb and on 30 April al 5 a.m. reached the biggest serac in the central part of the face. The riexl 50 m took 4 hours of extremely difficult mixed climbing; 2 pitches VII, 1 pitch VII, ice 90°, Al, 6380 m. After this, they rested for 6 hours because of avalanches.

On 1 May they started at 8 a.m. At 10 a.m. they left all their bivouac equipment at 6900 m to lighten the loads; steepness was mostly 70°, some parts 85°. Soon after this point, just few metres below 7000 m, they climbed the most difficult pitch, VII, 20 m, ice 95790° in two ! h'Hirs. Beside brittle ice, snow-storm broke with a fury and at 2 p.m. Ihey had to stop. 7050 m was the highest point they reached, about 400 m below the summit. Approximately 80 m of rock above them was Impossible to climb, because of very frequent avalanches. They waited for ') hours, half sitting, half hanging on a small shelf. At 11 p.m. II rlt'nred up, therefore, they decided to rappel 150 m down to reach their bivouac equipment. In 9 hours of sitting and in 2 hours of descent they got frostbitten fingers and toes.

They bivouacked for 8 hours and in the morning on 2 May were out of gas. Already very dehydrated, they decided to proceed with the descent, all the time in a snow-storm. At 1 p.m. they had to stop because of strong avalanches. After 3 hours of waiting on the end of rope (fixed for rappeling), they took advantage of a quiet interval between two avalanches and in 'escape-like' descending reached a cave in a serac. They bivouacked for the fourth time.

They proceeded with the descent at 1 a.m. when the weather cleared up again. Mostly climbing down the snow slope under serac and rappeling in icefalls they reached the bottom of the face on 3 May at 6 a.m. They hurried across the glacier, because soon after sunrise big avalanches started. That evening they reached Kangchenjunga base camp.

The ascent and descent together took 86 hours; 31 hours of effective ascent, 12 hours of effective descent, 12 hours of waiting for better weather and 31 hours of bivouacs. The grade of 1520 m climbed route is ED superior (ED+). Mostly they climbed unroped, except the most difficult parts - all together 8 pitches. They bivouacked only in sleeping bags and bivouac sacks. During the ascent and descent, they ate 200 grams of biscuits and drank approximately 4.2 litres of drinks (each).

Although Kumbhakarna East remains unconquered, they returned from Nepal fully contented. They have got a lot of, new experience, met many new friends, saw - as they said - may be the most beautiful part of the Earth. And what is probably the most important - they found out they are able to climb a face like this. Next year they'll come back to try the north face. When Tomo Cesen said: 'Probably the most steep ice in the world!', he meant the north face of Kumbhakarna East. 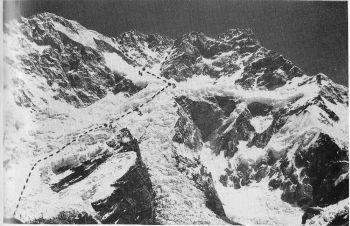 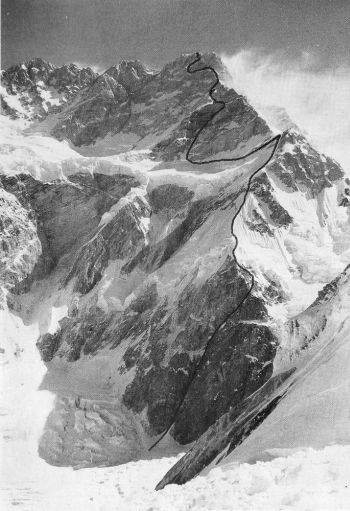 The Slovene route of ascent (1991) on Kangchenjunga from the west. Article 4 (T. Skarja) 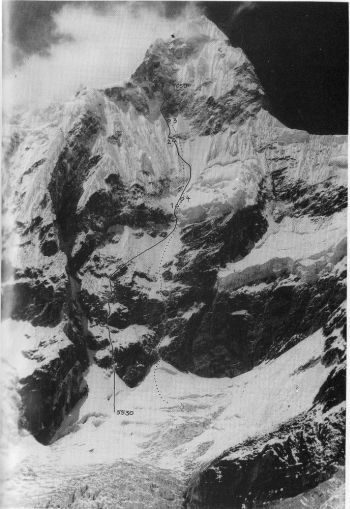 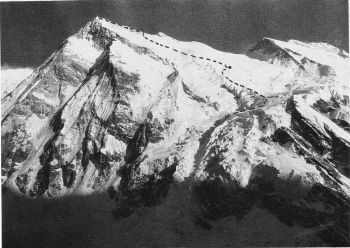