THE ASCENTS OF INDRASAN AND DEO TIBBA

The Kyoto University Alpine Club planned at first to explore in the range of Dibibokri Nala. However, it was impossible for us to be given the permission to come to this area because of the ‘tighter Inner Line' policy. Consequently, we turned our eyes to a virgin peak, Indrasan, located in the Pir Panjal range, which is not far from the mountains of Dibibokri Nala.

Our expedition consisted of seven members, including a professor as the leader, a graduate student and five undergraduate students who took the responsibility for planning the expedition. The members were as follows:

At the end of August, 1962, two advance members arrived at Calcutta by air and met four other members who reached there by a ship which had left Japan at the beginning of August with the equipment and provisions for the expedition on board. After spending several days at Calcutta for making troublesome customs' clearance, the party left by train for Pathankot where they joined three Sherpas from Darjeeling—Lhakpa Tsering as a cook, Dawa Thondup and Gunding. The leader came up with the party in the middle of September. The party enjoyed the trip made by train as well as by bus, and arrived at Rhuin (near Kulu) where the Beas and the Parbati rivers join. The party spent busy days purchasing food such as atta, rice, rock salt and vegetables, etc., and for arranging the transportation. Everything around this district was interesting and fresh for the young students. They enjoyed delightful days there, coming up to Kulu and Manali where some of them visited Major Banon's orchards. There the party was joined by two Ladakhis, Wangyal and Sparghum. 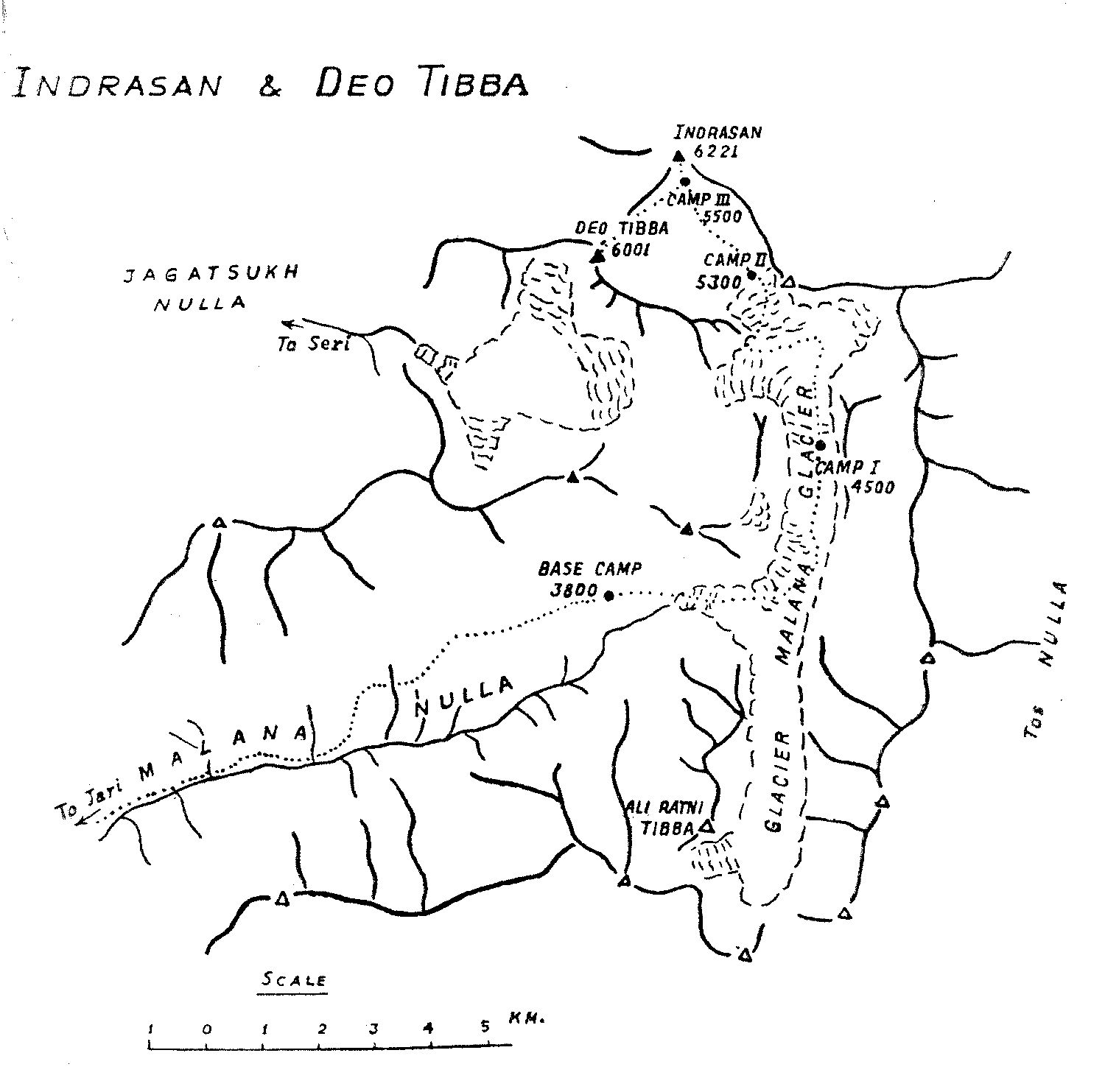 On September 10, the party made a one-day march along the valley of the Parbati up to Jari with 18 ponies and mules, loading on their backs wooden boxes of equipment and provisions weighing approximately one ton in all. This appeared to be economical.

It was desired to hire forty coolies for transportation in Jari. However, it became apparent that it was impossible to gather enough coolies at one time. The natives were busy harvesting the crops and were eager to get as much wages as possible. Accordingly the party was forced to split into three teams in order to transport baggage up to the Base Camp through the Malana glen.

The leader left Japan for New Delhi by air on September 8, and on September 13 arriving at Kulu met Tanaka and Gunding who passed him a letter from Tenzing, the President of the Sherpa Climbers' Association. Onodera and Tanaka met Sakai at Jari the next day. They followed other members who had left there several days previously.

In spite of a little trouble with the Malana coolies, on September 17 the party established the Base Camp at an altitude of 3,800 metres on a grassy alp 3 kilometres down from the snout of the Malana Glacier. The weather was pretty fine by the middle of the month. However, it seemed that the monsoon was not yet over, and the weather was reluctant to maintain its promise.

On September 23, we established Camp I in the Malana Glacier at an altitude of 4,500 metres. Yet we could not have a sight of the summit of Indrasan from Camp I because of an ice-fall (height about 700 metres) in the middle of the Malana Glacier. The camp was established near the foot of the ice-fall which hides the summit of Indrasan. The weather was very changeable towards the end of September and the schedule was retarded owing to bad weather—snow-fall, hail, thunder and rain.

It took ten days for us to find a way up the ice-fall from Camp I to climb up to Camp II which was established at an altitude of 5,200 metres, just above the upper edge of the ice-fall. Now we were happy to have a full view of the sombre rocky peak and summit of Indrasan and, in contrast with it, the graceful, snow-covered peak of Deo Tibba after fifteen days' endeavour. 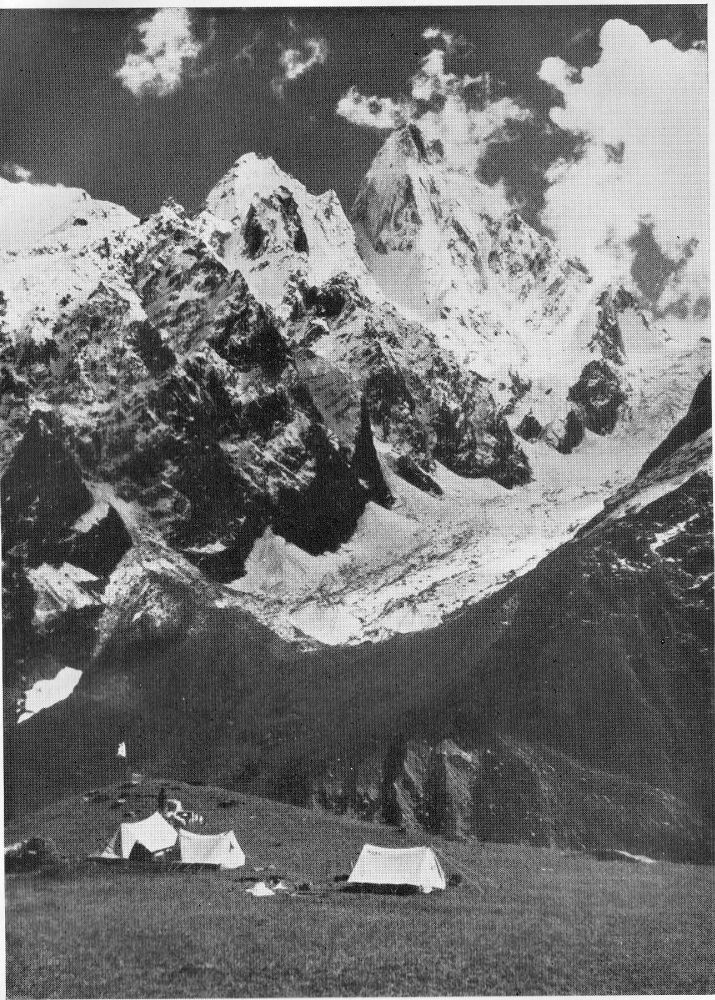 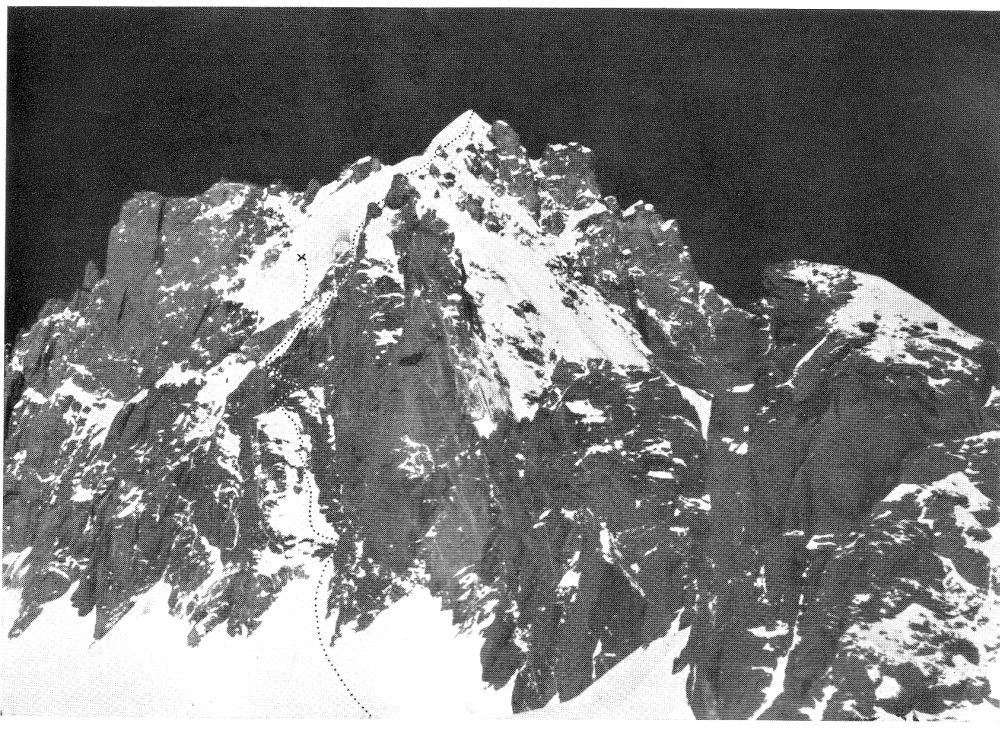 It seemed that the weather was improving day by clay. All members came down the Malana Glacier and assembled at Base Camp on October 4. We enjoyed the next whole day taking rest and making plans for launching the attack on the summit.

We marched forward to the second stage of mountaineering on October 6. All members, except the leader, went up the Malana Glacier full of hope for success. They left the Base Camp at 8 a.m. in a strong wind.

On October 8 we established Camp III on the upper neve of the Malana Glacier at an altitude of 5,500 metres and two members stayed there for the purpose of route finding.

Looking at the final peak we were badly embarrassed by the features of Indrasan which appeared as if a sheer rock wall defended from invasion the beautiful ice-stage of the summit where the god, Jamlu, had his residence.

The previous party which tried to climb Indrasan4 took their routes up the rock ridge rising from the col between Deo Tibba and Indrasan and all attempts resulted in failure. We tried to find a way to the summit in the sheer rock wall. In view of the consequence of reconnaissance we considered the rock ridge to be too long and difficult to climb. Therefore, we decided to climb the short route to the summit which would be found in the south face of the final peak, in spite of the possible difficulties. We thought that the most dangerous and difficult point in the route must be the overhanging rock at the middle point of the final peak.

After three days of hard work of route making by a team consisting of three members, Tomita, Miyaki and Iwase, a route became open up to the height of 5,800 metres. They fixed a 200-metre rope on the first steep ice-wall and the succeeding overhanging rock. Now the unknown was 400 metres, but it seemed too hard for us to feel at ease. They turned this remaining part over to the attack members, Omori and Tanaka, who had left Base Camp on October 8 and come up to Camp III on the 10th.

On October 11, Y. Omori and J. Tanaka launched the attack on Indrasan early in the morning in fine weather. They reached the upper end of the fixed rope at a fairly swift pace. They continued climbing a steep ice slope and traversed the second rock stage at its lower edge. Around noon they reached the foot of the ice- wall hanging down from the summit. The weather was changing to bad and there were observed from Camp III two dots moving on the ice-wall in the mist. Around 5 p.m. the summit made its appearance dimly in the twilight. There was no sign of anyone below the summit. Suddenly the two members appeared at the foot of the final peak. They reached Camp III at 6 p.m. exhausted. The first attack resulted in failure.

On the following day, six members, except the leader who was staying with Lhakpa at Camp I, met together at Camp III. There seemed no promise of continued fine weather and, moreover, we did not have enough food to stay additional days at Camp III. The bad weather and heavy snow-fall caused a shortage of food and we had no more time remaining. We decided to try the second attack on Indrasan on the following day.

On October 13, K. Tomita and Y. Miyaki left Camp III at 4.20 a.m. The weather was fine and there was a full moon hanging above the rock shoulder of Indrasan. After the hard work of climbing the first rock wall, they climbed at 8.30 a.m. to the upper end of the fixed rope at an altitude of 5,800 metres. Then they climbed a straight steep snow-ice slope and took a new route from there. They found themselves at the top of the rock wall after straggling for some time. It was very hard for the one who carried the heavy sack weighing about 15 kg. They climbed straight for about 50 metres and then traversed 20 metres along a small band.

At noon they reached a terrace where they took lunch. At that time they were fortunate to find that they could get out of the second rock stage. There was a steep, narrow ice couloir between the hanging ice-wall coming down from the summit and the rock ridge. About this time the weather turned bad and there was mist and cloud which concealed the route upward. They were undecided whether to climb further up or climb down. They took a rest for an hour and began to climb carefully up the couloir. At 3.25 p.m. they stood on the main ridge. They saw the summit through a dim light in the snow-fall. Now it seemed possible for them to climb the ridge with no difficulty. They left their sacks at the place for a bivouac and then continued climbing the last ice cap leading to the summit.

At 4.30 p.m. they were actually on the summit of Indrasan. They could not have the fine views which they expected of the mountains in Lahul and Spiti. They took snaps in the snow-fall and began to descend. They found a place for a bivouac in a crevasse at an altitude of 6,150 metres at the foot of the ice cap below the summit.

They stayed there during a night of terrible cold and hunger and then began to climb down in beautiful weather next morning. They abseiled four times and reached the upper end of the fixed rope at 12.10 p.m. They were completely exhausted, moved very carefully and came back to Camp III at 3.20 p.m. of the 14th.

Deo Tibba was also ascended on October 13. Y. Omori and J. Tanaka left Camp II at 6 a.m. and joined with T. Iwase and Gunding at Camp III at 8 a.m. They stood on the summit of Deo Tibba at noon and came back to Camp III at 3 p.m. They enjoyed fine views and took photographs.

On October 15, all members assembled at Camp I and returned to Base Camp down the Malana Glacier on the following day. They arrived on October 23 at Kulu where they made arrangements for the return journey to Japan via Pathankot and New Delhi.