When they extended their service to Pokhara at the end of 1952 Himalayan Aviation, however unreliable their schedules may have been, immensely improved the access to the central Nepalese Himalayas. Pokhara is only two days' march from the highest villages in the valleys running southward from the Annapurna Himal, and J. O. M. Roberts's striking 1950 photographs showed the splendid mountain scenery in which Pokhara is situated.

Frank Yates and I, having both to be in India on other affairs, applied for permission to visit the Pokhara district at the end of March 1953; we are greatly in the debt of H.E. C. H. Summerhayes, C.M.G., and to the British Embassy staff at Katmandu for their efforts on our behalf and for their help and hospitality on the way through, as well as for the very necessary letter of introduction to the 'Governor' (the Bada Hakim) of Pokhara, which was obtained for us.

With only a little over a fortnight, and so early in the year, serious mountaineering was out of the question. We thought it best to explore the two main valleys running northward from Pokhara, to sro as high as we could on the ridges either side of them, and to see, survey, and photograph the southern approaches to the Annapurna Himal for the pleasure of looking at big mountains from a new angle and for the benefit of future (and more serious) parties.

Leaving Pokhara on 17th March we travelled first up the Seti Khola to Bharbhare, the last village, went some way up the gorge beyond and back, crossed to Mirsa, climbed through the rhododendron-magnolia forest to a camp just below Pt. 10982, and walked along the ridge northward by summer pasture tracks to perhaps 14.000 feet, where we had a magnificent panorama of most of the south side of the Annapurna Himal, except for Annapurna III, which was obscured by Machhapuchhare which towered very close above us.

Then we went round eastward to the Madi Khola (known locally as the Mahindri Ganga) and established ourselves at Siklis, the last \illage, splendidly situated at 6,500 feet, high above the river. Here our presence caused a good deal of consternation. As in the other valley we were, so they assured us, the first European visitors. But in Siklis we were told that we must not go beyond the village, neither up into the hills nor down across the river. We gathered that there is a genuine fear in this village of disturbing the gods by trespassing on their privacy. This is understandable since Siklis is dominated by the tremendous precipices of Peak 22921, whose southern face is ringed with hanging glaciers from which ice avalanches pour down in great size and frequency. Fortunately, after a day's discussion amongst the elders, we were given permission to visit the upper pastures on the condition that we were only absent from the village for one night. Escorted by the friendliest of the village headmen we were able to put a camp on high summer grazing. Thence we walked to the highest point of the ridge west of Siklis, to perhaps 14,750 feet, where we were close under the precipices of the mountains proper. We had from here magnificent views of Machhapuchhare's east face, of Annapurna III, of the whole Annapurna II group, and of the upper gorges of the Madi Khola. We returned to Pokhara on 2nd April.

The following is a summary of our observations, from west to east along the range.

The many locals whom we questioned were extremely vague about the names of individual peaks. Machhapuchhare is, of course, known by that name to all of them. They do not seem to use the r.in e Annapurna at the eastern end of the group, and this name might well be reserved for the main peak which the French climbed, if better names can be found than 'Annapurna IF, &c., and reconciled between the various valleys. The Siklis people call their mountain 'The Three Sisters' and refer to any of them vaguely as Rudra Parbat' or cRudra Kailas'. 'Rudra', we were told, means a necklace, and indeed curved bands of rock on Annapurna II could explain this allusion. 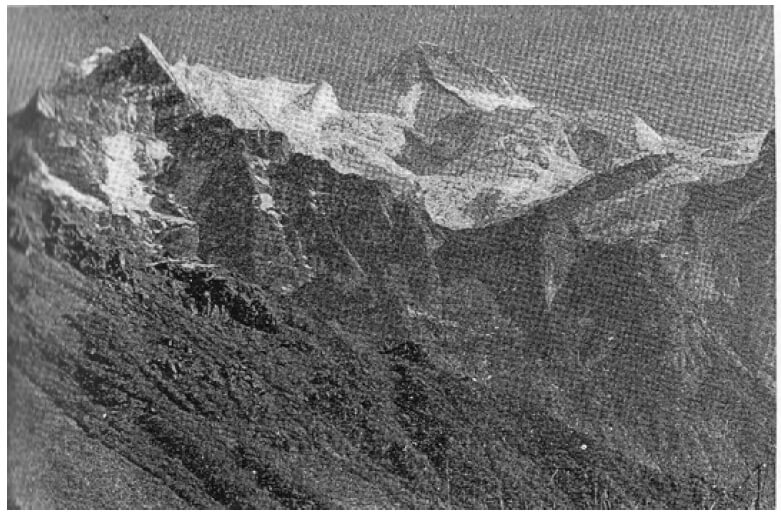 Eastern group of Annapurna Himal from about 14,000 ft. on ridge west of Siklis. 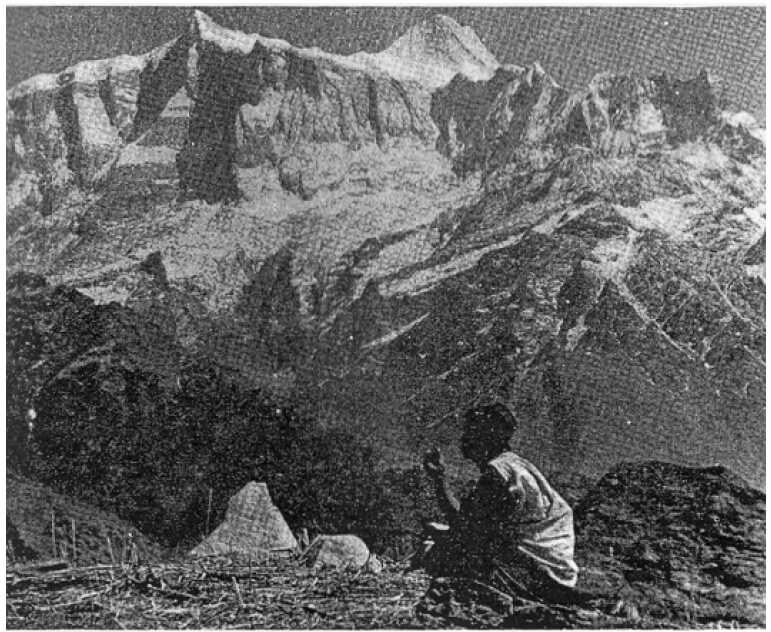 Eastern group of Annapurna Himal from the south-west (from about 12,500ft. on ridge west of Seti Khola). 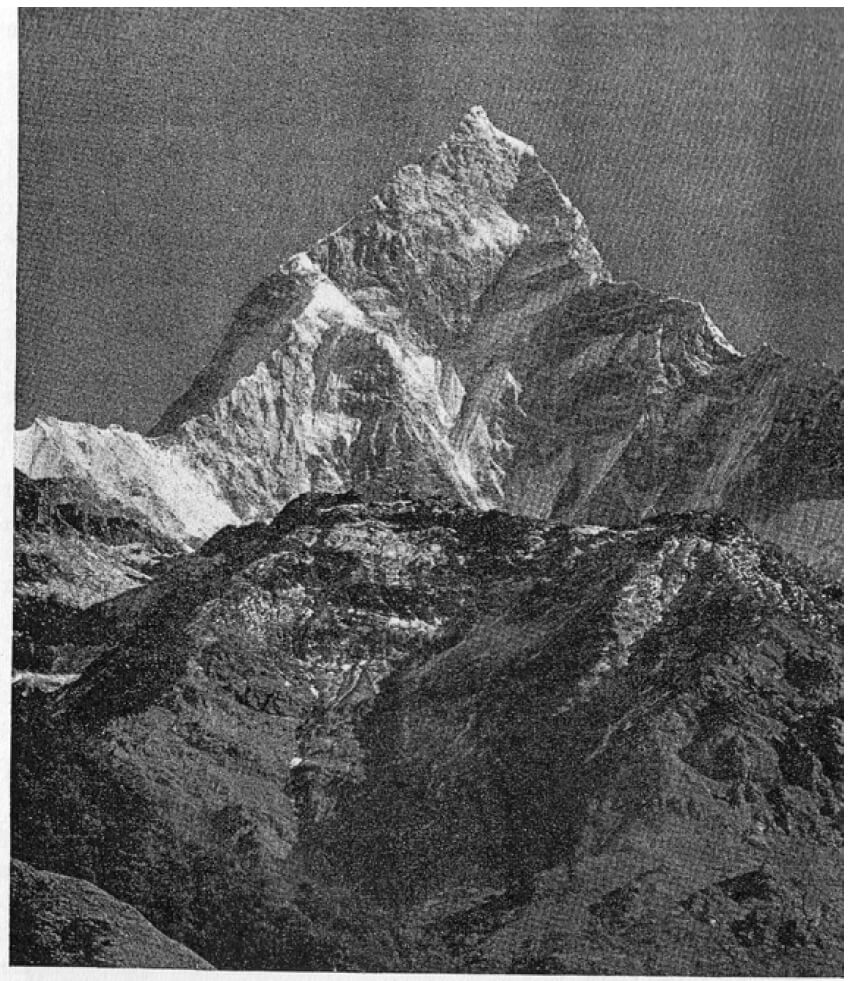 We found no name for Pt. 23607 at the west end of the range. Pt. 22921 is called 'Siklis Himal' in the village. It was made quite clear to us that the Lamjung Himal is the group starting east of this peak.

Up to 24th March we had westerly winds and clear dawns. Every day by 9 or 10 a.m. cloud obscured the higher peaks. This usually produced thunder and rain each evening. After a severe storm on 24th March the weather changed. We had days without cloud until the late afternoon, but a great deal of dust haze (up to 12,000 feet) from the plains of India obscured the lower views. The wind was still westerly across the high summits; on several occasions we were able to calculate its force by taking bearings on clouds. This showed a steady 60-70 m.p.h. at 25,000 feet.

We found food in the villages abundant and very cheap. We bought flour, rice, potatoes, eggs, chickens, milk, and occasionally vegetables. We could probably have bought sheep, which are abundant. Salt, sugar, and kerosene can be bought in Pokhara. Raksi was often as good as we could have wished, and costs only Rs. 1 per bottle. The Nepali rupee was then at 146 to Rs. Indian 100.

Our Darjeeling Sirdar picked up coolies on the Pokhara airfield. Rate Rs. 2 per day, plus rations. Their slow going in the hills was infuriating and it would be better to recruit locally for going high. But we found that the local 'guides', who are essential for the maze of woodcutters' tracks through the forests, were very reluctant to go on spring snow or beyond familiar ground. We had not brought boots for them, and the thorns troubled them exceedingly, once the beaten tracks were left, and naturally they disliked the spring snow which lay on north slopes above i 1,000 feet.

Our letter of introduction to the 'Governor' the Bada Hakim of Pokhara was most necessary. We had every possible help from him, but had we known how suspicious the upper villages would be of our intentions we would have prepared ourselves with letters of authority from him. Others would be well advised to do this.

We have a large number of photographs illustrating the topography of this region, and took prismatic-compass bearings from all our main viewpoints. The outline map published with this note adds some knowledge to the Survey of India J-inch maps of the district.

It was a great disappointment to us not to have been able to attempt any mountaineering. But our short visit was well rewarded in other ways.

There can be few towns to compare with Pokhara; its neat ochre- washed houses, its cobbled main street with no wheeled traffic, its fields bounded by coral trees which in March are a blaze of scarlet on leafless branches, and the whole dominated at every turn by the unbelievable pyramid of Machhapuchhare.

In the villages old Gurkhas would come out to greet us, and the women and children who had never seen a white face crowded closely round our tents. It is a prosperous land, with rich crops (thanks to their astonishing industry as farmers) and they ask little from the world outside Nepal.

It was enough to visit these happy, honest, healthy people, to hear them singing as they tended their flocks and to watch their dancers with the Annapurna as a background.