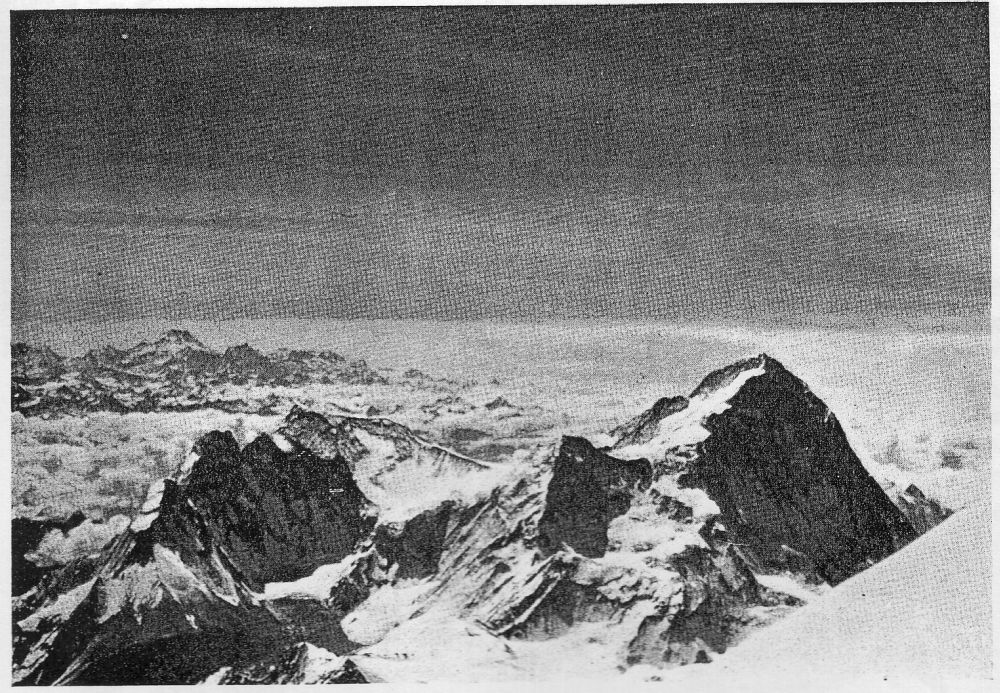 The Twenty-fifth Annual General Meeting of the Himalayan Club was held at the Great Eastern Hotel, Calcutta, on Friday, 29th May 1953, at 6.30 p.m. In the absence of the President on home leave, Mr. V. S. Risoe took the chair.

The Minutes of the Twenty-fouth Annual General Meeting held in Calcutta on 25th July 1952 were confirmed. The Annual Report and Audited Accounts for the years ended 31st December 1952, copies of which had been circulated by post to all members, were confirmed and approved. Messrs. Price, Waterhouse, Peat & Co. Ltd. were reappointed auditors for the year ending 31st December 1953. The Officers, Elective Members of Committee, and Additional Members of the Balloting Committee were duly elected as follows:

The Annual General Meeting was followed by a very enjoyable -unction attended by seventy members and guests, which included a buffet supper and talks, illustrated by films and slides, by R. H. T. Dodson and M. Hruska.

Members have continued to be kept informed of the Club's activities, and of the major expeditions to the Himalayas by means of the News Letters, of which approximately three are issued every year. Expeditions during 1952 included the attempt on Cho Oyu by Mr. Eric Shipton's party.

The outstanding event during 1953 was the ascent of Everest by Sir John Hunt's party. Details of this fine achievement can be read elsewhere. Most of the Delhi and Calcutta Members of the Club were fortunate enough to be able to meet Sir John Hunt, Sir Edmund Hillary, Sri Tensing, and other members of the climbing party shortlv after their return from the mountain. The President represented the Club at a number of functions which were held in London in honour of the Everest party.

On 23rd January 1954 the Club held a tea-party in Darjeeling for sherpas, their wives and families, and other guests. The occasion was the presentation to certain Sherpas of Coronation Medals graciously awarded by Her Majesty the Queen for the part they played in the successful Everest Expedition of last year. In all twenty-two Sherpas had been recommended by Sir John Hunt to receive the medals, which were specially inscribed with the words, ‘Mount Everest Expedition’.

The President. Mr. C. E.J. Crawford, who presented the medals, also awarded Himalayan Club Tiger badges to the following Sherpas for excellent services during the 1952 and 1953 seasons:

The President addressed the meeting in Hindi, and in the course of his speech mentioned that the last occasion on which a party of this kind had been held wras in 1924 after General Bruce returned from Everest.

It will be of interest to members to know that in addition to Tensing Norkay, G.M., the following climbing Sardars will assist in arranging teams if applied to direct:

As it was never the intention of the Club that the Honorary Local Secretary in Darjeeling should permanently become responsible for organizing Sherpa porters for expeditions and as there are now Sherpa Sardars able themselves to accept this responsibility, the Committee recommends that even when the Darjeeling Local Secretary is available, members should apply direct to the Sardars. The Darjeeling Local Secretary will continue to maintain the Club's register of porters and will always be glad to render advice and assistance to members. The Local Secretary in the United Kingdom, Col. Tobin, has available an up-to-date list of Sherpa porters on the Club's register, and will be glad to supply information to members' in the U.K.

Attention has been drawn to the rather unsatisfactory entries made by some Expeditions in the porters' reference-books. These are unsatisfactory in that they are vague, and when analysed give no real information other than that the porter in question is a very good fellow. It would assist the Club greatly in ensuring suitable men for expeditions if a little trouble could be taken over the porters' references, and a reasonably comprehensive statement of their capabilities, or otherwise, given.

There are quite a few Garhwali porters trained in elementary snow- and ice-craft in eastern Garhwal. The Hon. Local Secretary in Dehra Dun would be very glad to put anyone interested in climbing that area in touch with them.

In spite of the restrictions upon access to certain areas of the Himalayas, there has never been greater activity. Though we cannot expect another such thrill as the ascent of Everest, 1954 should be another wonderful year for those who, to what extent they may, physically or in spirit, voyage in the Himalayan mountains. There are no less than eleven important expeditions, among them the New Zealand Alpine Club Expedition to the Baran glacier area, led by Sir Edmund Hillary; the Californian Expedition to Makalu; the British Reconnaissance Expedition to Kangchenjunga, organized by J. W. R. Kempe, in which our Hon. Secretary, T. H. Braham, is taking part; the Japanese are trying Manaslu again; the Americans Dhaulagiri. At least three nations have sent expeditions to the Karakoram, the Cambridge University to the Baltoro, Austro- German under Rebbitsch to Rakaposhi, and the Italians under Desio to K2.

In the President's Notes and News, which appeared in vol. xv of the Journal, mention was made of the difficult period through which the Club had passed during the war years, and of the steps which were being taken after transfer of the Club's headquarters from Delhi to Calcutta to revive it. It can now be said, six years later, that the Club is in a flourishing and vigorous state. New members have joined and old members have been traced. There are up-to-date registers of both Members and Sherpa porters. On ist April 1954 there were 553 members of whom 189 were resident in India. A new Members' List is in the process of being printed. We have a permanent home for our equipment and library. The Journal has appeared again, maintaining the high standards set in previous years, and members have been kept in touch with Club affairs and matters of general interest by the issue of periodic News Letters. The various sections of the Club have also sprung into vigorous life and in various ways have been able to be of much assistance to Himalayan Expeditions.

All this has been the work of many willing hands, but the Club is particularly grateful to its retiring President, Mr. C. E. J. Crawford, who has been President during the whole of this period, and to whose leadership and enthusiasm the Club very largely owes its renewed vigour and prosperity.

As we go to press word has come in of the death of Mr. V. F. HOUSTON of the oxford university press. Our publishers have our deep sympathy in their loss in which we share. For Mr. Houston was a staunch ally and an unfailing helper in matters connected with the distribution of our