THE JADH GANGA VALLEY AND THE NELA PASS

The lower stages of the Bhagirathi valley have been described twice in the Himalayan Journal, so that a further account of the ten days' journey to Harsil is needless. Harsil is an extremely pleasant village, situated in deodar forest on flats by the river at a height of 8,100 feet. Here one may stay in a huge rambling house built by ex-Private Wilson of a Highland regiment a short while before the Indian Mutiny. An important point for one living on the country is that excellent apples may be obtained at Harsil.

The old Survey of India 'Atlas' map (53I) gives little idea of the ruggedness of northern Tehri-Garhwal.[1] The Jadh Ganga river flows into the Bhagirathi from the north, 9 miles above Harsil. On leaving the main valley, the path climbs abruptly up on to airy precipices on the right bank of the gorge. The path, has, in places, been blasted along the cliffs, and is quite adequate as far as Nelang. Beyond this point it has been left to its own resources and has in many places disappeared under the unstable rocks of the valley.

The first camp has to be made amongst some giant boulders in a tiny area by the river, 4 miles from the main Bhagirathi valley. Thence, after crossing a wooden bridge, 10 miles of rough going along the flanks of crumbling lake-terraces bring one to Nelang. The fair-sized village stands on an extensive talus fan; it was deserted when we passed, being only inhabited in summer. In a gully opposite the village the rocks change from steep granite slabs to almost horizontal sedimentary rocks, and from there onwards the scenery r typically Tibetan.

A boundary dispute has been going on over this neighbourhood int cveral years. Tibet claims Nelang, and even as far as Harsil. At present there is a compromise. The people who use the village pay a house-tax to Tehri-Garhwal and a stock-tax to Tibet.

Another 10 miles up the gorge, after a heavy climb on to a big talus fan, the flats of Tsonam are reached. Here there is a camping- ground at about 13,000 feet. There are bharal round here and some come down fearlessly to lick salt on the slopes close by the river. There do not appear, however, to be any good heads as far as Pulamsumda.

Pulamsumda is 10 miles from Tsonam; a steady climb in a gorge, with several bad traverses across rotten shale. The camping- ground is on a grassy flat at 15,000 feet, amongst red-brown hills. A height of 17,500 feet was reached from this camp, and a good view was obtained of the two easy, though high, passes into Tibet. These are the Thaga La and the Tsang Chok La, both about 16,500 feet above sea-level.

Game in the neighbourhood was disappointing, possibly because we were there so early in the season. Small game was non-existent. The bharal appeared to be confined to one side valley in which was a flock of about sixty-five. Of these the best head was certainly not more than 25 inches. It is of interest to note that the skull of an Ovis Ammon ram was found at 16,500 feet. Evidently these animals come into the valley later in the year and probably a number of bharal also visit it. In May the grass is still yellow and withered, but by July there should be sufficient grazing both for game and for the flocks from Nelang.

Going downstream Bhaironghati (53I/se) can be reached in 2 ½ marches. It might be as well to mention here that the F.R.H. marked on the maps should not be taken as forest rest-houses. None are equipped at all, and some are merely shepherd huts. The one at Bhaironghati is a rather unsavoury dharmsala and there is no rest- house at all.

From the Jadh Ganga a short visit was paid to the Gangotri glacier. A snowstorm did not encourage a long stay and Harsil was again reached on the 24th May. Here I met J. B. Auden, doing his geological survey, and a satisfactory, if bibulous, evening was spent. Next day we went our several ways, I to Bashahr and he to the Jadh Ganga.

The Nela pass, 17,000 feet, was very briefly described by Marco Pallis several years ago.1 It is of interest as being the highest pass in use between Tehri-Garhwal and Bashahr, and also the pass which Kipling had in mind when he traced the journey of Kim's lama friend.

The mouth of the Jalandra valley is only a few yards below Harsil. The first camp is only 3 miles up the valley in a pleasant birch- grove at 10,000 feet. The next march is also short, but involves a big climb. Shortly after Phulal Daru the valley assumes the U-shape of an ancient glacier trough and old grass-grown moraines provide the climbing. At 13,000 feet one toils over a tributary moraine and reaches the extensive Kiarkoti flats. The surroundings are magnificent; there is birch to be had and camp can be pitched at the north end of the flats and at the foot of the pass. 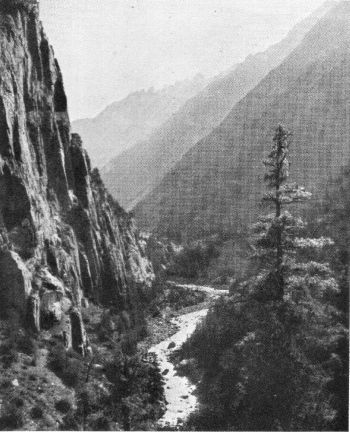 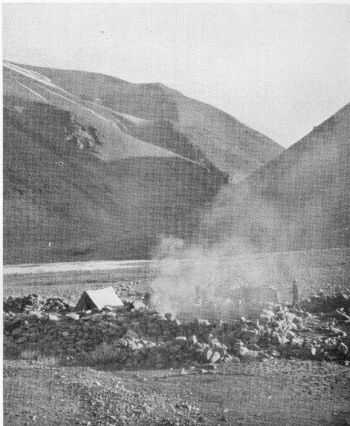 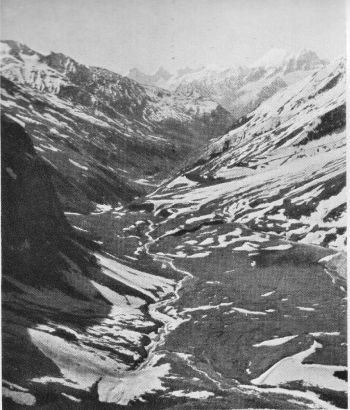 View down the Jalandri valley from 15,000 feet, towards the Bhagirathi. Srikanta, 20,120 feet, in the distance. 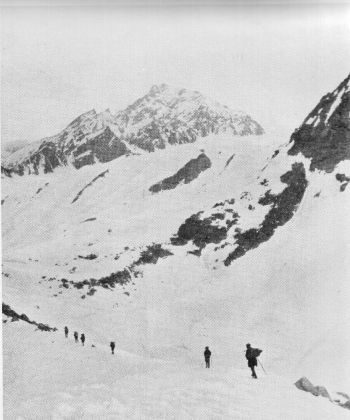 Approaching the Nela (or Chhotkhaga) pass (over the col to right of photograph). Coolies on a lateral moraine, c. 15,800 feet 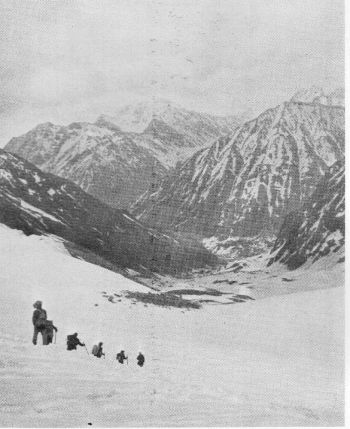 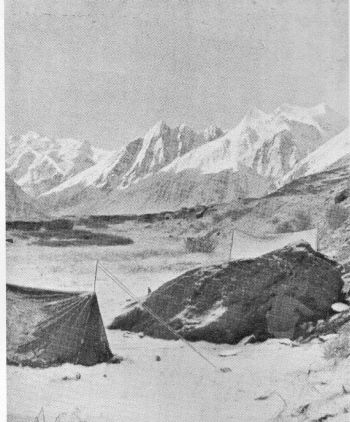 Three red bears were seen when camp was being pitched, but they had evaporated mysteriously when we tried a closer acquaintance next day.

The Chhotkhaga (Nela) pass was crossed on the 28th May in stormy weather. Snow was down to 13,000 feet, and early in the morning good progress was made over its hard surface. Later, moraine debris pushed down by the glaciers to the west would prove troublesome. The glen bends gradually to the east, until at 15,500 feet a razor-backed lateral moraine is reached overlooking a fine glacial amphitheatre. Two big, much-crevassed glaciers come down from the north and feed a glacier basin nearly a mile across and reaching down to 14,000 feet.

From the moraine the way lies over a col to the east. There is a long climb up rolling snow-slopes which evidently cover a glacier, and at 16,900 feet a snow-plateau is reached. This is nearly a mile long, and after it there is a steep climb to the summit ridge.1 Rocks protrude through the snow on the top, but the north side was corniced above an almost sheer slope down to another plateau.

We hacked an unworkmanlike but adequate path down the slope and then ran out on to the plateau. Clouds had been swirling about us on the way up, with some sleet, but now a terrific snow-squall struck us from the east and more or less blew us down to the Baspa valley. A convenient moraine rib between two ice-falls afforded a quick way down, and at 5 o'clock, 11 hours after the start, the snow was left behind and the main valley was reached. We turned downstream at the snout of a considerable glacier, covered with black moraine, and camped by the Baspa at 13,700 feet.

The upper Baspa is broad and flat and bounded by cliffs of brown conglomerate. There are no permanent habitations until Chitkal is reached 17 miles down the valley. The rest of the Baspa has been adequately described. It is very beautiful, and there is evidence that a glacier may have once reached below Chitkal, 11,384 feet, 18 miles from the present snout.

Sangla was reached on the 30th May and Simla on the 13th June, by the forest route of the Brigg's Road.

'The height of the pass, according to the modern map, 53I/SE, is 16,900 feet. The plateau is therefore somewhat lower.-Ed.