A NINE STRONG BRITISH team, led by Roy Lindsay, attempted Nilkanth (6596 m) in the Garhwal Himalaya in September 1990. The team did not reach the summit. The high point at approximately 5790 m was reached by Richard Topliss and Paul Ramsden on 23 September, 1990.

Three of the team, Peter Green, Rebekah Beadle and Mary Fysh, set out from the UK in advance on 22 August. They made purchases of hardware and food supplies, before trekking via the old pilgrim route over the Kuari pass to Joshimath.

The whole team met at Joshimath on 7 September. They then made a 30 km truck journey to Hanuman Chatti. The team then walked into base camp, from the southeast, via the Khirao valley. Paul and Richard established base at 4020 m behind a lateral moraine under the S face of Nilkanth. They were joined a day later by the rest of the team, including Rob Tresidder, Helen Jones and Ernie McGlashan, on 10 September.

The team operated alpine style. Peter/Rob and Roy/Ernie attempted an approach from the southeast via the left bounding gully of the S face but were unsuccessful. They diverted their attention to the SE ridge from the SE col where Paul and Richard were concentrating their efforts.

An advanced base was established at 5180 m, on 12 September, on a scree covered shoulder about 1000 m west of 'Holdsworth's col.' A spring provided freshwater.

Paul and Richard doggedly made several forays before establishing a bivouac just below the summit of ' Point Alison', the high point achieved by Tunstall's expedition of September 1989. En route they discovered the Tunstall ice-cave bivouac, then surmounted scree slopes to gain the ridge proper. After traversing the ridge for several hundred yards, the first difficulties were encountered. Here, with rock of Alpine II/III, a fixed rope had been left by the American expedition. This expedition preceded the British attempt by a few weeks. Above this, further rock and scree led to a second fixed rope on the south of a leaning pillar. Climbing this section, Alpine IV (loose) led to further rock and scree before reaching a bivouac ledge just under the summit of 'Point Alison'. Initially a cache of food and gear was left, then retreat made in poor weather. This cache was supplemented during subsequent sorties.

Meanwhile Pete/Rob, Roy/Ernie were stocking up advanced base and preparing to follow the route up the SE ridge. Route finding was difficult and Pete /Rob followed a false gully above Tunstall's ice-cave before finding a marker tape left by the Americans. They then regained the route.

In an attempt to push higher on the SE ridge, following a return to base, Paul and Richard carried six days food and bivouacked on 21 September at the ledge below ' Point Alison'. To reach this point they had climbed most of the day from ABC in cloud and rain, which latter turned to sleet/snow. This was becoming the daily weather pattern.

The following day started well, and they climbed over the south side of 'Point Alison' making a 45 m abseil down a 65 degree mixed slope to a snowy col beyond. During this descent they found a third fixed rope left by the American team. The weather deteriorated and in cloud they made progress up scree slopes and mixed rock, Alpine II. Coming upon further difficulties a fourth fixed rope was discovered. Climbing further mixed ground and snowy couloirs led to easier slopes as snow fell. Paul and Richard established a bivouac at about 5670 m on a snow slope on the flank of the second major pinnacle of the route. That night there was further snowfall.

On the morning of 23 September, Paul and Richard climbed to a point just below the summit of the second.major pinnacle, estimated at 5730 m. From this vantage point they could see that a descent was required down slopes, out of sight, to reach a snowy col. Beyond lay a precarious rock pinnacle. They determined that it may be possible to climb this on its left, to gain the snow covered southernly flank of a fourth pinnacle and more pinnacles beyond.

The weather deteriorated rapidly. Following a period fruitlessly sheltering in the hope of improved conditions, they retreated to advanced base camp the same day.

Poor weather continued. Pete and Rob climbed to 'Point Alison' to remove remaining caches of food and equipment. leaving only the American fixed ropes in place on the mountain.

No further attempt on Nilkanth was made. Rob climbed a gully from Holdsworth's col' to just below pt 5471 m on the SE ridge of Nilkanth to get a perspective view of Nilkanth, but he was completely enveloped in cloud and snow.

Expedition members departed the mountain variously between 15-30 September as planned. Rebekah and Mary early to return to work; Richard, Helen and Paul went on to visit Rajasthan (Paul then went to Nepal and climbed Nya Kanga in the Langtang Himal). The rest of the team returned to the UK via Delhi, disappointed with the poor weather on Nilkanth. The sun shone persistently on the return journey !

History of ascents and attempts on Nilkanth. (By Robin Beadle)

1950: Anglo-Swiss Abi Gamin Expedition, Kenneth Berrill, looked at the W ridge on 5 September 1950, but did not set foot on it due to bad conditions; account of expedition and general Garhwal info H.J. Vol. XVII, p. 18.

1951: New Zealand attempt, Riddiford's party. Planned to attempt the W ridge, their attempt was thwarted by bad weather and possibly half hearted - they didn't set foot on the mountain but tried Pt. 6260 m to the W instead as it looked more feasible. Account H.J. Vol. XVII, p. 42, initial part contains very useful info on topography and possible routes, listed in H.J. Vol. XXIII, p. 100. More than Mountains, Jackson, p. 78 reports Hillary and Lowe to have reached c 5790 m on the W ridge in poor conditions.

W ridge (highest point reached c 5790 m on this route) are listed, in

1961 : 13 June: Disputed first ascent of N face by O.P. Sharma and 2 Sherpas of Indian party led by Col. N. Kumar noted AJ. 66, p. 390, account AJ 68, p. 139, dispute reported in AJ. 69, p. 145, H.J. Vol. XVIII p. 193 (brief description of route and comprehensive summaries of Nanavati's paper and of the report by the IMF's investigating committee who concluded that the summit had been reached, but nonetheless recommended that the peak should be re-ascended, thus implying that they still had doubts). This is now generally accepted as the authentic first ascent.1

Peak opened to foreign mountaineers to climb from the south side only. Joint expedition with Indian mountaineers no longer a pre-requisite. 1989 : Post-monsoon attempt from the south S ridge /SE face by party led by Duncan Tunstall (UK), including Andy Bond (UK), Paul Alison (UK) and Jim Nonnemaker (USA). Reached 5030 m on the SE ridge before poor weather and lack of time terminated their progress. They got up and past the pinnacled section, the first time without, the second time with full Alpine kit, to establish a bivi on the easier angled snow section above (Alpine TD, rock unpleasant and loose mica schist). Two trekkers accompanied the team up the Khirao valley and photographed extensively the upper reaches of the Panpatia Bamak.

1989 : Post-monsoon recce by Roy Lindsay's party. Approached E face in approx 3 hours from Badrinath and prospected the approach to 'Holdsworth's col' - quite feasible but a lot of uphill on snow overlyinq slabs. They then went round to the Khirao valley and trekked to the foot of the SE ridge in 2 days with full kit, without touching stiow on the S side of the mountain - (Symthe's approach). Good water, stream and little lake for first camp, and plenty of snow to melt on slopes adjacent to SE ridge.

1990: American and British attempt from the South. 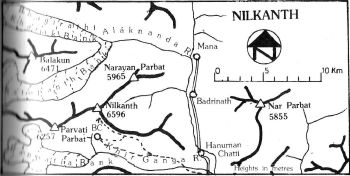 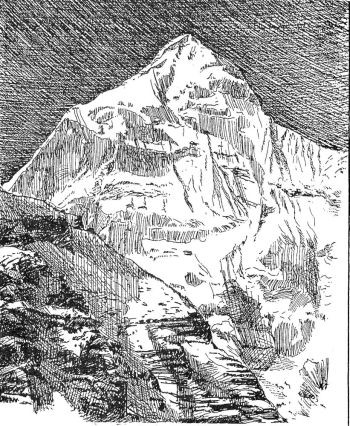 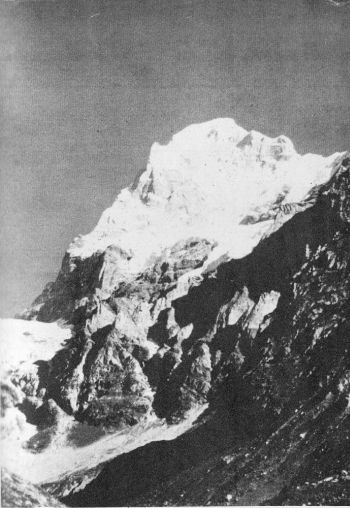 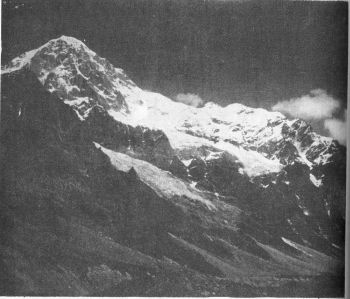 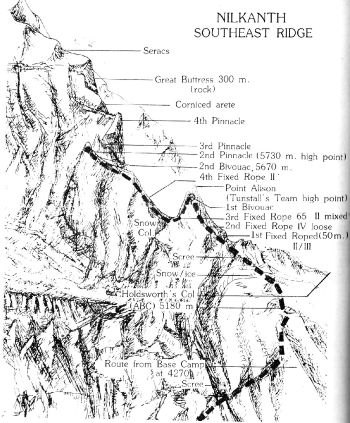 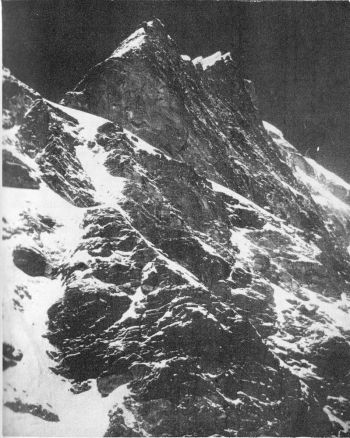